Just as the Brotherhood of Steel is about to invade Fallout 76, Modiphius recently announced the addition of multiple miniature sets of The Enclave into Fallout: Wasteland Warfare. Five boxed sets of miniatures and three supporting card deck expansions are all available now for preorder from the Modiphius webstore and from your FLGS, with shipping scheduled for this November.

The Core Box is the base set for this Enclave collection, as its five miniatures represent the standard Enclave Assault Team consisting of an officer, two heavy power armor soldiers, and two Tesla Troopers. The High Command set includes three miniatures, one of which is none other than the domineering Colonel Augustus Autumn, who led the Enclave in the Washington, D.C. campaign to take over Project Purity in Fallout 3. A high echelon Enclave officer and one of those infamously stoic Enclave scientists complete the set.

The Enclave: Hellfire set includes two minis of the highly-feared, fearless Enclave soldiers in Hellfire power armor. This power armor is specifically designed to withstand fire, heat, and flame weapons, while the soldiers themselves employ weapons such as flamethrowers with fanatical focus and devastating effect. The Frank Horrigan set has but one mini, but it’s the legendary Frank Horrigan – the Enclave’s most murderous soldier and main antagonist of Fallout 2. Horrigan comes equipped with his signature End Boss Knife and End Boss Plasma Gun, and features the severed head of a Deathclaw at the feet of this renowned hulking Super Mutant in power armor. 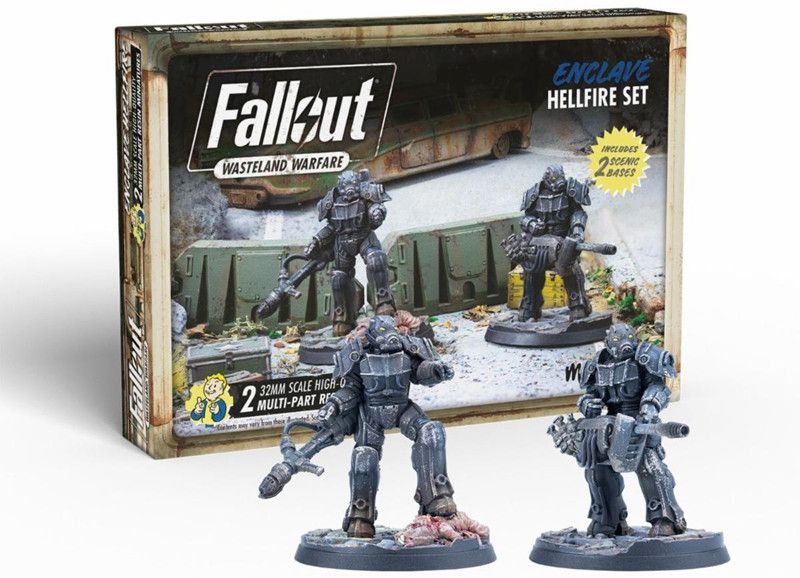 The Denizens of the Wasteland Card Expansion Pack is a special deck that contains the Creature Controller card expansion, allowing us to effectively turn the irradiated creatures of the Capital Wasteland into our own playable faction. The sets has cards for numerous creatures, including the Rabid Mole Rat, Weak Behemoth, Softshell Mirelurk, and more. It also contains cards for creature weapons, AI, equipment, mods, and conditioning and command cards.

You can preorder these sets from the Fallout: Wasteland Warfare Enclave Collection page on the Modiphius webstore, and be sure to check with your FLGS too.