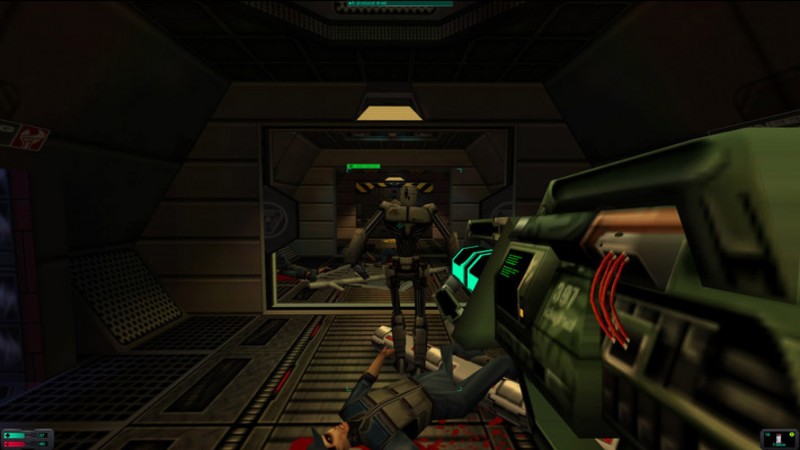 This feature was originally published online in December 2015.

Otherside Entertainment, currently developing the Kickstarted Underworld Ascendant, has revealed that they’re developing a new entry in the System Shock series, the last of which was released in the tail end of 1999. Here’s why that’s a big deal.

How System Shock Came To Be

Back in 1994 gaming was in a very different place. Game demos were passed around on floppy disks. Doom and Civilization ruled the world. Windows 95 wasn’t even a thing yet. Looking Glass Technologies, which housed innovators like Warren Spector (Deux Ex), Doug Church (Thief) and Harvey Smith (Dishonored), was known for the revolutionary role-playing series Ultima and wanted to create an immersive simulation that wasn’t fantasy-based. They opted for science fiction, and System Shock, a first-person adventure game that cast players as a hacker going up against an artificial intelligence known as SHODAN hell-bent on destroying Earth, was born.

At first glance, the original System Shock looks like a Doom clone. There are pixelated corridors where all sorts of nightmares lumber and roll about, such as reprogrammed droids or humans who have mutated into zombies thanks to corrupted cybernetic implants, all of them looking to turn you into red paste. However, the similarities end there, as the game reveals its role-playing tendencies by requiring you to use an inventory system to store items and to loot the bodies of destroyed enemies. Player movement is a bit clumsy and so is using the cursor to interact with the inventory or objects in the environment. As a result, System Shock is a game where you have to exercise caution to survive since you can’t rely on twitchy reflexes to save the day. You have to plan your battles carefully while lurking in the shadows, learning which weapons work best against which enemies.

However, what was truly special about the original System Shock is how it delivered its story. Not wanting to develop any dialogue trees for the game, Looking Glass set about creating an interactive narrative that didn’t require the player to talk to non-playable characters, opting instead to let exploration serve as the story itself. After a brief intro cinematic that sets up the game’s premise, the player is dumped into a space station and tasked with recovering e-mails  that act as signposts telling them where to go and what to do.

In recent years this technique of turning collectibles into guidance systems has become one of the primary methods of interactive storytelling because it’s a simple, sometimes elegant way to have the player be an active participant in an interactive experience. Picked up a note containing the combination to a safe filled with riches or details that reveal who your target is in Dishonored? Searched a house high and low for clues for the whereabouts of your sister in Gone Home? Listened to the recorded final testaments of dying crew members in Soma? All of those moments are descendants of System Shock’s narrative design.

While it was once a hassle to track down a copy of System Shock, Night Dive’s recently released enhanced edition solved that problem. Unfortunately, for all the game’s innovations, it’s still a pain to play thanks to an archaic control scheme that makes the experience feel more like a history lesson than an engaging time.

How System Shock 2 Changed Everything

It would take nearly five years for the sequel to System Shock to arrive. By 1999, Looking Glass Technologies had become Looking Glass Studios and released Thief: The Dark Project. System Shock 2 is a different and far more vicious animal than its predecessor. The first game had elements of horror but was basically a cerebral action-adventure game. The sequel is outright horror, with the player constantly placed in a position of  paranoia and powerlessness, fighting gruesome monsters and even encountering (digital) ghosts.

SHODAN returns in the second game but in a larger, more diabolical role, initially pretending to be a human and using the player as a tool to fight her enemies before revealing her true identity in one of gaming’s best plot twists. Talking about the twist to Gamespot in 2007, game director Ken Levine explained: “If I had a single goal in making Shock 2, it was to corrupt the relationship of the player with the game. Games tend to be very trustworthy-good guys are good, bad guys are bad. What you see and perceive is real. Sometimes characters are betrayed, but the player never is. I wanted to violate that trust and make the player feel that they, and not [only] the character, were led on and deceived.”

The game has aged better than its predecessor thanks to a new engine and a user interface that isn’t so sluggish, making System Shock 2 play more like a first-person shooter than a menu juggler, as well as its innovative skill trees. The skill system forced you to make choices about what kind of character you were going to be, like a bruiser who could mow down enemies with advanced weapons or a brainy type who’s better off sticking to the shadows and hacking turrets to use them against enemies. While this sort of RPG convention wasn’t new in itself, System Shock 2’s progression system was exciting because it worked well with the tense atmosphere, letting players determine how they would weather this nightmare scenario.

Where the first game set up situations that had you thinking tactically to try and figure out how to overcome obstacles, System Shock 2 raises the tension, forcing you to do the same thing but this time you’re often cowering in a storage closet, listening closely for the monster standing outside the door to finally wander away. The ship you’re stranded on, The Von Braun, is as effective a setting in a horror game as there has ever been. You’ll find bodies hanging from ceiling pipes, rooms torn asunder, robotics gone haywire and the corpses of people who have shot themselves rather than be turned into SHODAN’s slaves while you scurry through hallways, hoping to remain undetected for as long as possible. System Shock 2 was the first game to take the premise of being trapped on a spacecraft with deadly lifeforms and make it terrifying while also developing the effective, excerpted storytelling method from the original System Shock.

The collectible audio logs go beyond being a trail of bread crumbs to lead the player around. They also help reinforce the terror of The Von Braun, revealing the ship to be a place rife with paranoia and betrayal, crew members at each other’s throats before the mutants started taking over the ship. These recordings give the place a sense of history so you’re not just wandering a random starship. It’s a place where people have lived, where they’ve loved and hated one another, and now you’re standing in their mass grave. There’s more than horror there: there’s somberness and tragedy as well.

As incredible as the second game was, it wasn’t a commercial hit for Looking Glass and less than a year after release, the developer shut down. Irrational Games, the company that co-developed the game, carried on the series’ trademark focus on environmental storytelling and emergent gameplay with BioShock, a spiritual successor that takes place in an underwater utopia inspired by Ayn Rand’s Objectivist philosophy. The game replicated the major plot points from System Shock 2, casting you as a stranger in a strange land who’s eventually betrayed by a companion, while having a stronger focus on gunplay than its cyberpunk counterpart. BioShock, a game that had the benefit of launching on consoles after being hyped for several years, is more popular than PC-exclusive System Shock ever was. However, both a new System Shock game and the remake of the original game could bring the series back into the public eye in a big way, revitalizing two cult classics and turning them into a powerhouse franchise by drawing in both fans of the original games and people who adore BioShock.

The announcement for System Shock 3 raises a number of questions, even more than your typical teaser reveal for a game. How can Otherside Entertainment afford to develop both System Shock 3 and Underworld Ascendant without being stretched too thin? In what capacity are they working with Night Dive Studios, who owns the rights to the IP, to help make this game happen? Otherside Entertainment was founded by Paul Nerauth, one of the founders of Looking Glass, so who else from the development teams for either System Shock game is coming back? And what about the game itself? System Shock 2 had a rare, quality cliffhanger. Will 3 pick up from there or be its own story?

The teaser site, which went live today, answers none of these questions and instead offers up a snippet of audio from SHODAN saying hello in her classic, murdery way as well as a survey asking users their age, console preference and gauging their interest in virtual reality gaming. Though it exists in the public eye only as an announcement at this point, it’s not hard to understand why many gamers are ready to see what creeping horror awaits around the bend. The first two System Shock games were transformative classics, changing the adventure genre forever with their innovations. And while it’s impossible to know what the third game will be like, or if it will have anywhere near the same impact as its predecessors, this is still shocking and exciting news for a series that most have considered dead for more than 15 years.