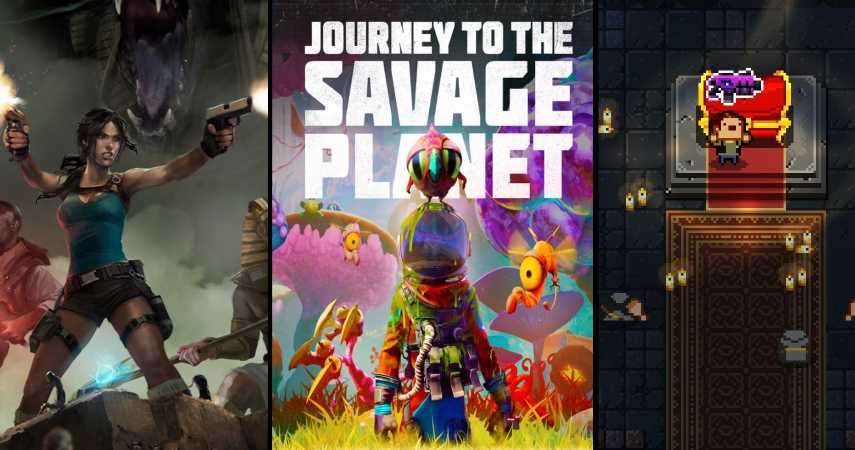 Google Stadia Pro is getting three new games added to its service: Lara Croft and the Guardian of Light, Enter the Gungeon, and Journey to the Savage Planet: Employee of the Month Edition. They will be accessible to all subscribers on February 1.

Stadia Pro is an initiative from Google that bundles in a bunch of games alongside additional features like 4K, HDR, and 5.1 surround sound while streaming at high speeds. It also provides discounts on its store; right now, you can get Trials Rising and Valkyria Chronicles 4: Complete Edition for a lower price. Stadia Pro costs $9.99 a month.

All three games offered this month have a level of quality that will keep your fingers twitching on the controller or mouse and keyboard. Thanks Stadia Source for the heads up.

Lara Croft and the Guardian of Light

This Tomb Raider spinoff features co-op gameplay in an unconventional top-down view. Going through temples, you and a partner can solve puzzles, take out enemies in some twin-stick action, and platform your way to defeating evil. This isn’t exactly a new game, however. It released all the way back on September 28, 2010 but it was received fairly well by critics with an 82 Metacritic score. Stadia doesn’t have that many co-op games, so maybe this is worth checking out. Regardless, the series seems to be as strong as ever with a new Netflix animated series on the way.

Enter The Gungeon blends the bullet hell genre with dungeon-crawling to create a unique gameplay style. The goal is to reach the ultimate treasure at the end of the game, but it will take some mental fortitude and skills to make it there. The game itself is procedurally generated as you face against hordes of enemies and devastating bosses. It also has a wealth of guns to choose from, including a weapon that fires bees and another that shoots rainbows. Just like Lara Croft and the Guardian of Light, this can be played with co-op, so you get a double dose of this feature in February.

Journey to the Savage Planet: Employee of the Month Edition

This space exploration title is getting an exclusive version for Stadia players. Within this sci-fi adventure, you’ve landed on an unknown planet researching its ancient inscriptions and along the way, you face some nasty bosses that may give you a challenge. The environments themselves are puzzles as you interact with its creatures and take advantage of the wildlife, mostly to their detriment.

This exclusive version comes with an enhanced photo mode, more crazy ads that will likely give you a chuckle, and further appearances from the hilarious Martin Tweed. You can read more details here. According to our recent interview, Journey to the Savage Planet was a success for the studio as the game exceeded sales expectations, so it’s no surprise we’re getting a new edition of the game on February 1.