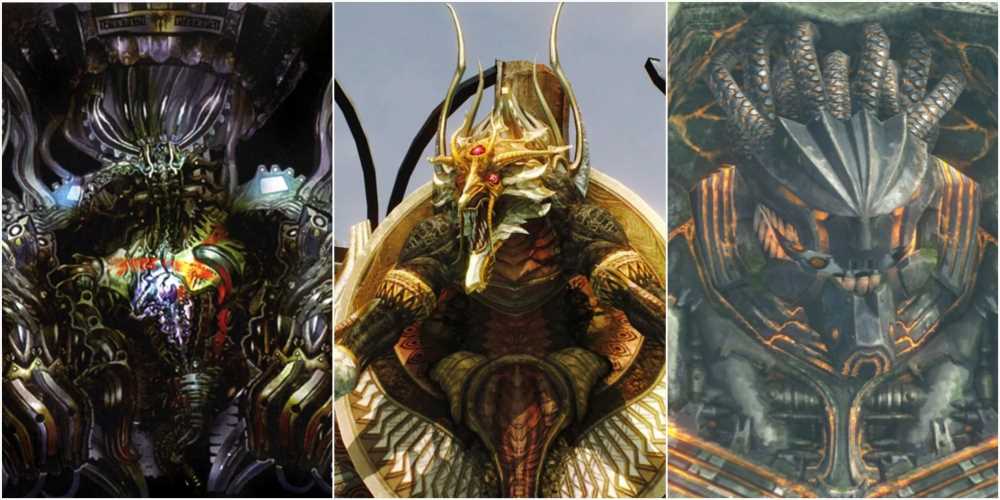 In Final Fantasy 13 you can find supernatural mechanical entities powered by crystals on both Pulse and Cocoon known as fal’Cie. These beings have god-like powers that both directly and indirectly govern or influence life on their respective worlds. A god named Bhunivelze sought to reach the Unseen Realm and created the original “fal’Cie” to achieve this goal: Pulse, Lindzei, and Etro. After creating numerous fal’Cie on what would become known as Gran Pulse, Pulse retreated to an unknown realm. Meanwhile, its automata carried out the deity’s will by terraforming the land and populating it with fearsome creatures.

The fal’Cie left behind can brand humans with a mark that turns them into l’Cie – beings of great power that can use magic. If they fail to actualize their Focus, they turn into ghastly shells of themselves known as Cie’th. Though a centuries old conspiracy pits the worlds of Cocoon and Gran Pulse against each other, the fal’Cie of Pulse pay little heed to human quandaries. Instead, they pursue their assignments of searching for Etro’s gate and crafting an army for Bhunivelze’s return. Let’s see which Pulse fal’Cie are critical to this end.

An aquatic, whale-like fal’Cie that aggressively protects the waters and wildlife of the Sulyya Springs. It is thought that Bismarck vehemently guards its territory because its function is to reshape the land through water erosion, however slow the process may be.

It employs various indirect means of dispatching intruders from its sacred waters and is thought to be a forgettable summon in the greater Final Fantasy universe.

This fal’Cie isn’t making much progress in preparing for Bhunivelze’s return.

A fal’Cie that tirelessly digs subterranean tunnels along the Mah’habara Subterra. It looks like a spherical boulder with a spinning ring of glowing spines rotating around it. It can also transport those able to halt its advances as its interior has a hollow compartment.

It is thought this fal’Cie’s goal is to excavate habitable underground environments for the local flora and fauna and even find Etro’s gate in case it is underground.

We’re getting warmer! Searching low for a gate whose appearance is unknown is a good start to serving the Maker’s needs.

3 Dahaka – Sovereign Of The Sky

Dahaka is an aerial fal’Cie that is first spotted gliding through the sky with ease, despite its imposing stature in the Yaschas Massif. It likely patrols and monitors the heavens in search of Etro’s gate. The party resolves to follow it to Oerba and comes to find it has made its home in Taejin’s Tower.

Our protagonists continue to the tower and are attacked by Dahaka, since it is territorial over its claim. The true masters of the tower, the Menhirrim, warn the party to turn back or face Dahaka’s wrath. They continue without fear, thus gaining them help from the tower’s guardians for their bravery.

Warmer still, as searching high above the clouds for souls floating into the sky (or wherever it is they go) is a better place to start looking for a spectral gate.

2 Titan – Reaper Of The Weak

Titan is a colossal, humanoid fal’Cie that towers over the landscape of Pulse and makes the earth it walks upon quake. His function is to expedite the process of natural selection by pitting the creatures of Gran Pulse’s ecosystem against one another to ensure the strongest survive and breed. Titan also acts as a “biogenitor” by plucking weaker species from the land and eating them to birth new ones in an attempt to prevent ecological stagnation.

Titan most likely does this to create powerful specimens that can be placed on Arks and put into stasis for future use by Bhunivelze in a war against Mwynn when he makes his return. He is also one of the few fal’Cie that speaks to the protagonists and congratulates them for their strength if they pass his trials in the Faultwarrens.

Once the protector of Oerba – Fang and Vanille’s hometown on Pulse – Anima branded them nearly 700 years before the events of Final Fantasy 13 with the Focus of becoming Ragnarok. This action by the fal’Cie may have been instrumental in instigating the War of Transgression. However, some historians argue Cocoon started the war so the people living in their pretentious paradise would be lulled into a false sense of security and trust the fal’Cie of the floating rock implicitly – despising and fearing anyone and anything from the lower world wilds.

Vanille feared their Focus and ran from it causing Fang to transform into an incomplete version of the harbinger of certain annihilation. As such, Fang only managed to crack Cocoon and did not succeed in obliterating it all those years ago. Etro, though dead, forsaken, and slumbering in another world, intervened and put her and Vanille into a slumber of crystal stasis before their Focus could be completed. Cocoon bears the scar of Fang’s attack as a portion of the planet’s outer shell is clearly missing.

Anima fell dormant due to Etro’s intervention with Fang and Vanille asleep within its Vestige. Barthandelus then took them and placed them on Cocoon in the hopes that when the l’Cie awoke they would complete their Focus the second time around. Anima seeking to bring about the end of Cocoon sets it on fire in the eyes of Bhunivelze.

If Anima’s l’Cie are successful in completing their Focus, their efforts would flood Etro’s gate with souls of the deceased, revealing its location, and facilitate the Maker’s return.