Final Fantasy VII Remake is coming out sooner than many had thought. Before its big E3 conference tomorrow, Square Enix went ahead and announced a release date for the much-anticipated remake: March 3rd, 2019.

The announcement was made during a special Final Fantasy VII concert held earlier today at the Dolby Theatre in Los Angeles. The performance – titled “Final Fantasy VII: A Symphonic Reunion” – saw more than 100 musicians play through the beloved JRPG’s soundtrack.

Shortly after, Final Fantasy VII’s original director, Yoshinori Kitase, took to the stage, followed by legendary series composer, Nobuo Uematsu. Both were met with rapturous applause that only ended when it was clear we’d be seeing more footage from the game.

Sure enough, we were treated to another look at this long-awaited remake. Cloud, Barrett, Aeris, and the AVALANCHE gang were all present during this action-packed preview from the game’s early stages.

We saw interactions and dialogue between these characters, complete with English voice-overs.

There were brief glimpses of the battle system, too. Final Fantasy VII remake won’t be using the same turn-based combat the original did some twenty years ago.

This is a far more action-heavy affair that gives players real-time movement of individual party members, chaining attacks, and unleashing their abilities.

The title screen was followed by a date: 03/03/2020. Kitase-san confirmed that more information will be available for Final Fantasy VII Remake during the Square Enix E3 2019 press conference tomorrow, June 10th, at 7.00pm.

It was not confirmed whether this is in fact just one chunk of the overall Final Fantasy VII package. It has been speculated for a long time that the remake is being split into three parts (perhaps one episode per disc of the original game).

Its likely Square will show the same gameplay again tomorrow at its conference with a proper look and explanation of what’s being changed for the remake. 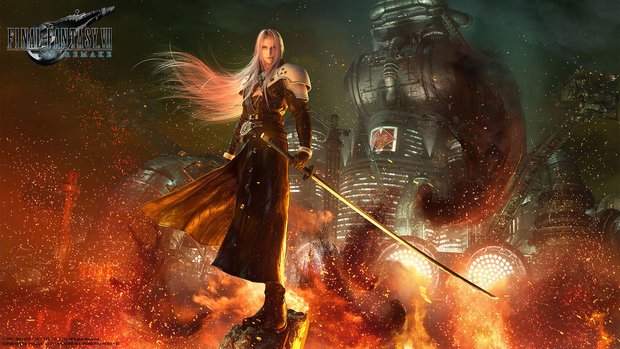 Alongside the release date, new key art featuring the game’s infamous villain, Sephiroth, set against a burning Midgar skyline was also unveiled during the FINAL FANTASY VII – A Symphonic Reunion concert at the Dolby Theater in Los Angeles.

FINAL FANTASY VII REMAKE will be available for the PlayStation®4 system on 3rd March 2020.