Assassin’s Creed Odyssey was a good game when it released last fall, and it’s only gotten better through a variety of free updates adding things like new game+ and extra quests. However, not all of the expanded content is free. A season pass offers access to two DLC stories (each one has three episodes), and this week marks the beginning of the second arc, entitled Fate of Atlantis. The first arc (Legacy of the First Blade), left me with mixed feelings – but judging just from this first new episode, The Fate of Atlantis makes major improvements in almost every area.

1. A Weirdly Engaging Story
The Isu (a.k.a. the First Civilization) have always been an important underlying element of the Assassin’s Creed story, but they step up to play a bigger role here than ever before. I don’t want to spoil too much about how the events unfold, but you interact with Isu characters more often and more directly as you explore Elysium, the realm of Persephone. The larger premise is interesting, tasking you with winning Persephone’s favor while also working to stir up trouble for her. This works on a macro level, but the individual exploits of Kassandra/Alexios don’t always have big payoffs – the idea of liberating controlled soldiers to build a rebellion feels especially rushed and ambiguous. However, even if a particular quest falls flat, the general direction of the story has plenty of weird sci-fi mythology to keep you playing.

2. Gorgeous surroundings
In Legacy of the First Blade, players simply undertook new tasks in old areas. However, this first part of The Fate of Atlantis gives you an all-new playground in the form of Elysium. Ubisoft Quebec did a wonderful job bringing out the natural beauty of Greece before, but all restraints are gone now that players are in an otherworldly realm. High plateaus, colorful gardens, improbable waterfalls, advanced technology – the sights and sounds of Elysium provide something beautiful (and different) to observe as you move between your objectives. You have a surprisingly large amount of ground to cover, too; like the regions of the base game, Elysium is split up into different areas with assigned overseers, so you have lots of time and opportunities to wear down Persephone’s control in an area.

3. New Challenges
Patrolling guards are still your primary foes, but a few smart tweaks give encounters new intensity. If you’re playing this DLC at this point, your Kassandra/Alexios is probably already near godhood, dominating the battlefield with an array of powerful abilities. In Elysium, you encounter enemies who can drain and freeze your adrenaline bar, blocking your access to the skills you’ve been depending on. This increases the danger of engaging with large groups of enemies, and it also adds a layer of agility to fights, since you need to evade frequently to dodge these debilitating attacks. I also enjoyed the addition of kolossi – powerful statues that only wake up when fights happen nearby – because they make you assess your surroundings and pick advantageous spots to risk combat. Even if many of your objectives are still familiar (clear a fort, hunt an animal), the new surroundings and foes go a long way toward making them feel fresh. 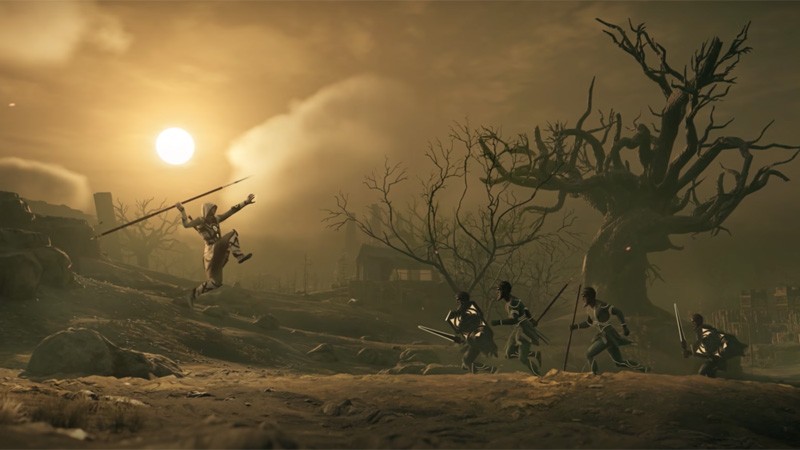 4. Rewards Worth Getting
You have plenty of incentives to explore Elysium and discover its secrets. On the practical side, you find shrines that are home to marble statues of Persephone. Every time you destroy one these statues (usually after taking out a handful of guards), you get an ability point, and they add up quickly. You also get enhanced versions of four existing abilities (Battlecry of Ares, Bull Rush, Slow Time, and Rain of Destruction), which increases their power and utility. I especially liked the new Ares Madness, because it amps up your strength and range to make short work your foes, like Spartan Rage in God of War. Plus, the new epic gear set – apart from looking neat and futuristic – has an augment that extends the duration of Ares Madness. Though I still found a fair share of blue and purple junk to disassemble, I was impressed overall by the cool stuff I found in Elysium.

5. Forward Momentum
The modern-day narrative is a divisive element of Assassin’s Creed, but this episode does a great job moving it forward without getting too bogged down. You don’t spend much time controlling Layla or interacting with her fellow assassins, but that part of story serves as a compelling frame that adds weight to your actions as Kassandra/Alexios. I don’t want to reveal too much here, but the story taking place actually seems significant – for both the past and the future – in a way that the previous DLC never did.

While we won’t know the overall quality until all three episodes have released, playing the first part of this new arc is already more satisfying than Legacy of the First Blade. Last time, my reaction to the first episode was cautious skepticism. This time, I’m actively excited to see what’s coming next.