Praenost is home to many things – Tanta Sila, an arid climate, and a whole bunch of Mutants to fight. There are seven, to be exact, though three of them are Altered Nunda. In Forspoken, Mutants are tough fights that you can take on once you've gotten a bit stronger that reward you with a nice chunk of experience and some high-level crafting materials.

Taking on these foes is no simple task, though. You'll have a far better time if you come back to these areas later in the game, with upgraded spells, more elements to choose from, and better equipment. Of the two Altered Aiolornis in Praenost, this one is the significantly easier one. This is mainly due to the fact that it is alone, whereas the other Airlornis is backed up by a veritable flock.

The Altered Aiolornis is weak to Prav's Magic, but it's a while before you can get your hands on that. If you want to fight this overgrown bird at the earliest possible opportunity, stick to Frey's Magic – it resists Sila's Magic.

Despite the resistance to Red Magic, it's a decent idea to wait until you have Sila's Magic unlocked before taking this Mutant on – it has a spit attack that will reduce your Defense if you get hit by it. To combat this, use Aegis, one of Sila's spells.

Aiorlornis loves to stay high in the sky and make very fast swooping attacks. If you're not locked on, it can easily get you when you're not expecting it, thanks to the attack's quick startup. In addition, the high level it stays at will make it hard to reach with your shorter-ranged attacks. You may have better luck facing this foe with Scatter Shot, which fires so rapidly that you're bound to get at least some damage off as it makes its drivebys.

For beating this Mutant, you'll get four Welkind Garlands. 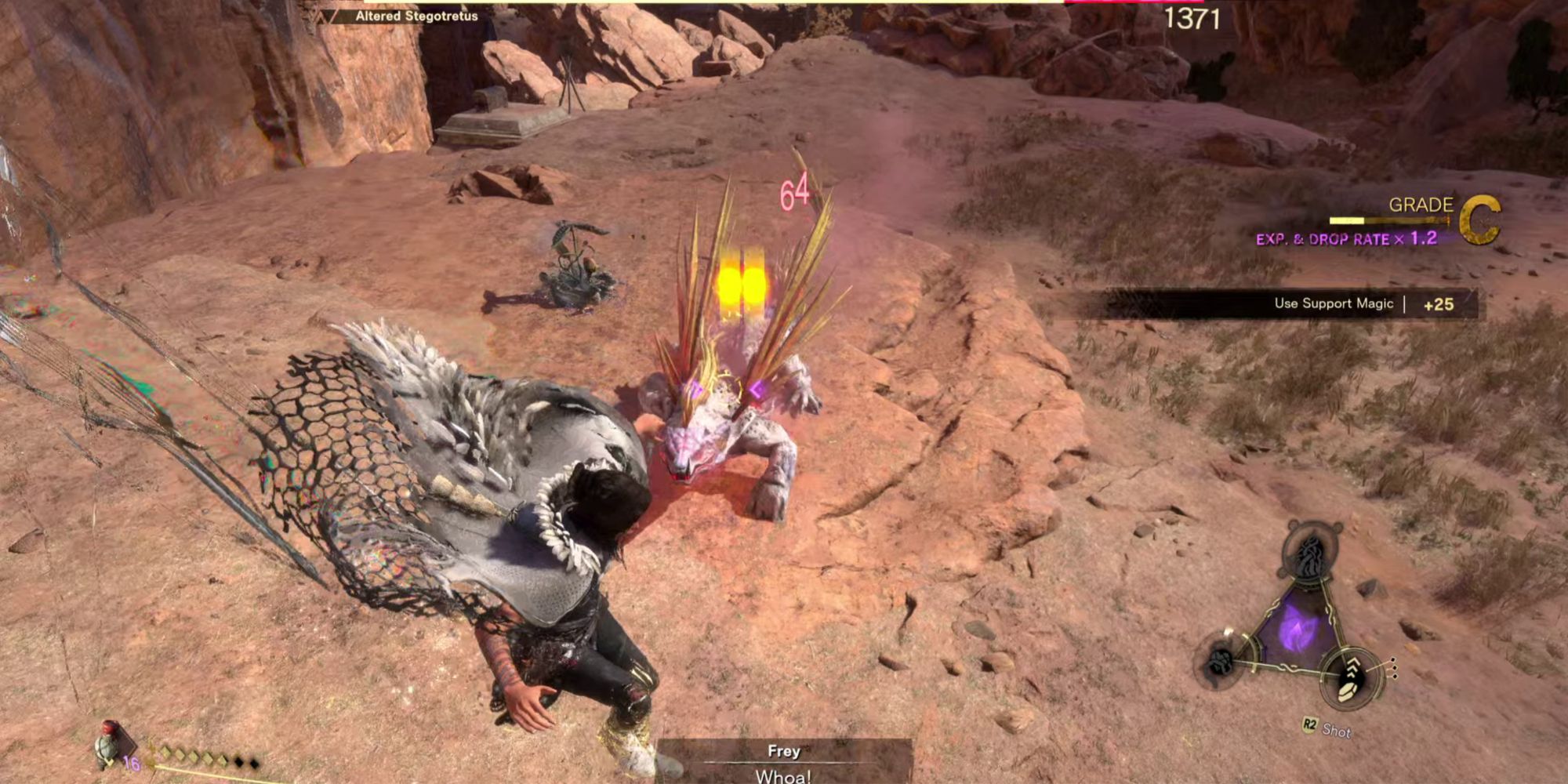 Altered Stegotretus has a weakness to Frey's Magic and it's decently slow. These two facts alone should make it quite easy to beat. The beast does have a few tricks up its sleeve, though – its most dangerous attack is a poisonous spit that lingers for a few moments after landing. This makes moving around the battlefield dangerous, as it's all too easy to end up Flowing right into a cloud of poison. Have Leach on hand to cure the status ailment quickly.

Speaking of Support Magic, Frey has lots of spells that easily augment her damage output – Disperse and Implant come out very quickly and can deal a lot of damage, and the Stegotretus is easily lured into a Prime trap.

The small area that you have to fight the Stegotretus is both a blessing and a curse. You don't have much room to dodge, making getting caught in a poison cloud extremely easy, but the enemy also has nowhere to go when you unleash the full might of your Support spells on it.

You'll get four Welkind Garlands for beating the Altered Stegotretus. 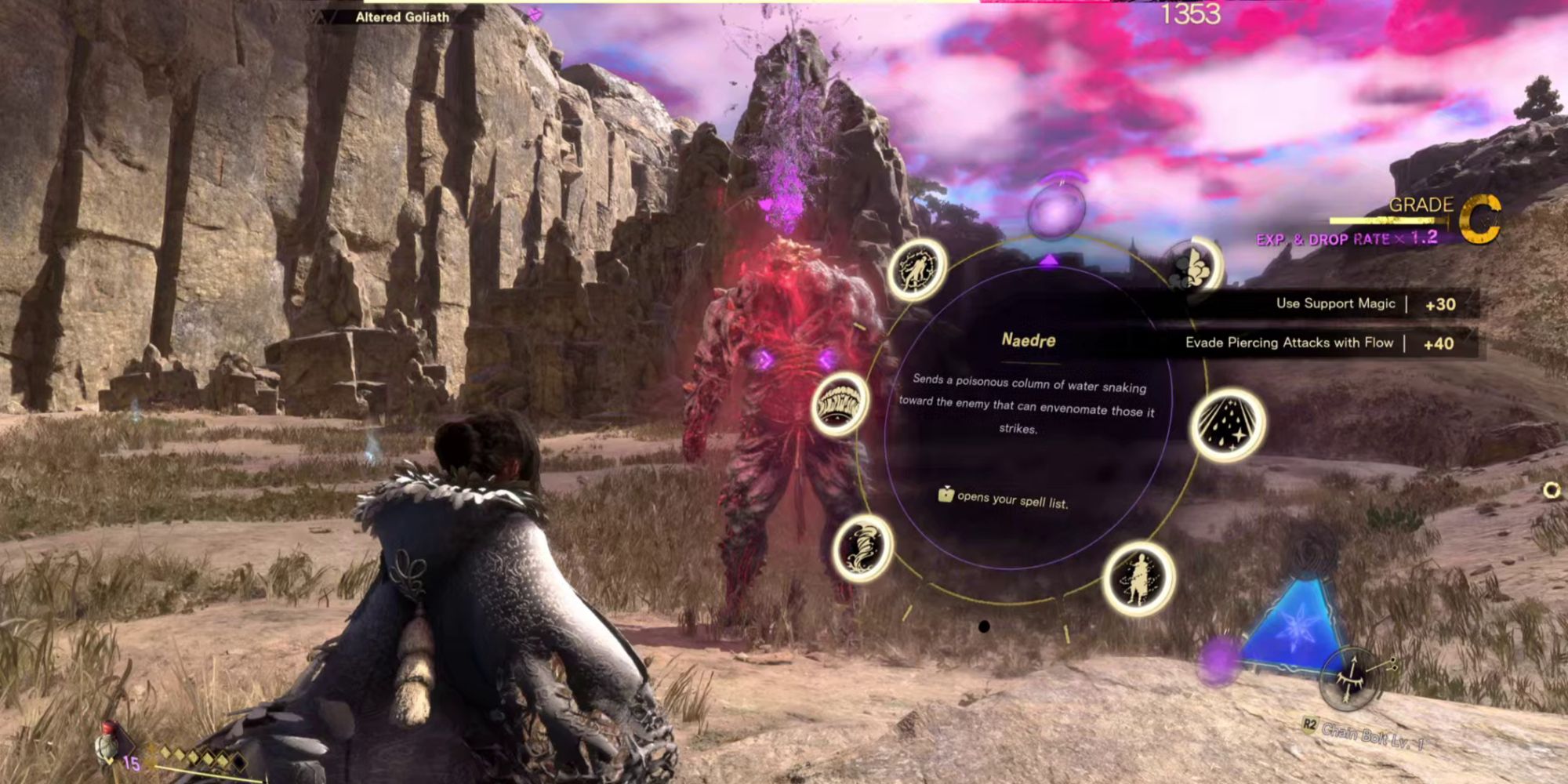 You might have encountered Ogres during your travels in Praenost – well, a Goliath is a souped-up Ogre. This makes Altered Goliaths souped-up Goliaths. To that end, it's important to state that you have little chance of coming out on top of this fight until you've at least acquired Prav's Magic, which comes with the crucial Naedre spell already learned.

The reason is that Goliaths have a persistent healing effect which makes them functionally immortal unless you can deal more damage than it heals, and with how high-pressure Altered Mutant fights can be, this is a tricky ask. Instead, you can use Naedre to poison the enemy (with 100 percent success rate, mind you), which neuters its health regeneration entirely.

After this, fighting an Altered Goliath is a simple task – you just need to be very wary of its leaping crush attack and its ranged projectiles and try to aim attacks at its back whenever possible to take care of its massive health pool. 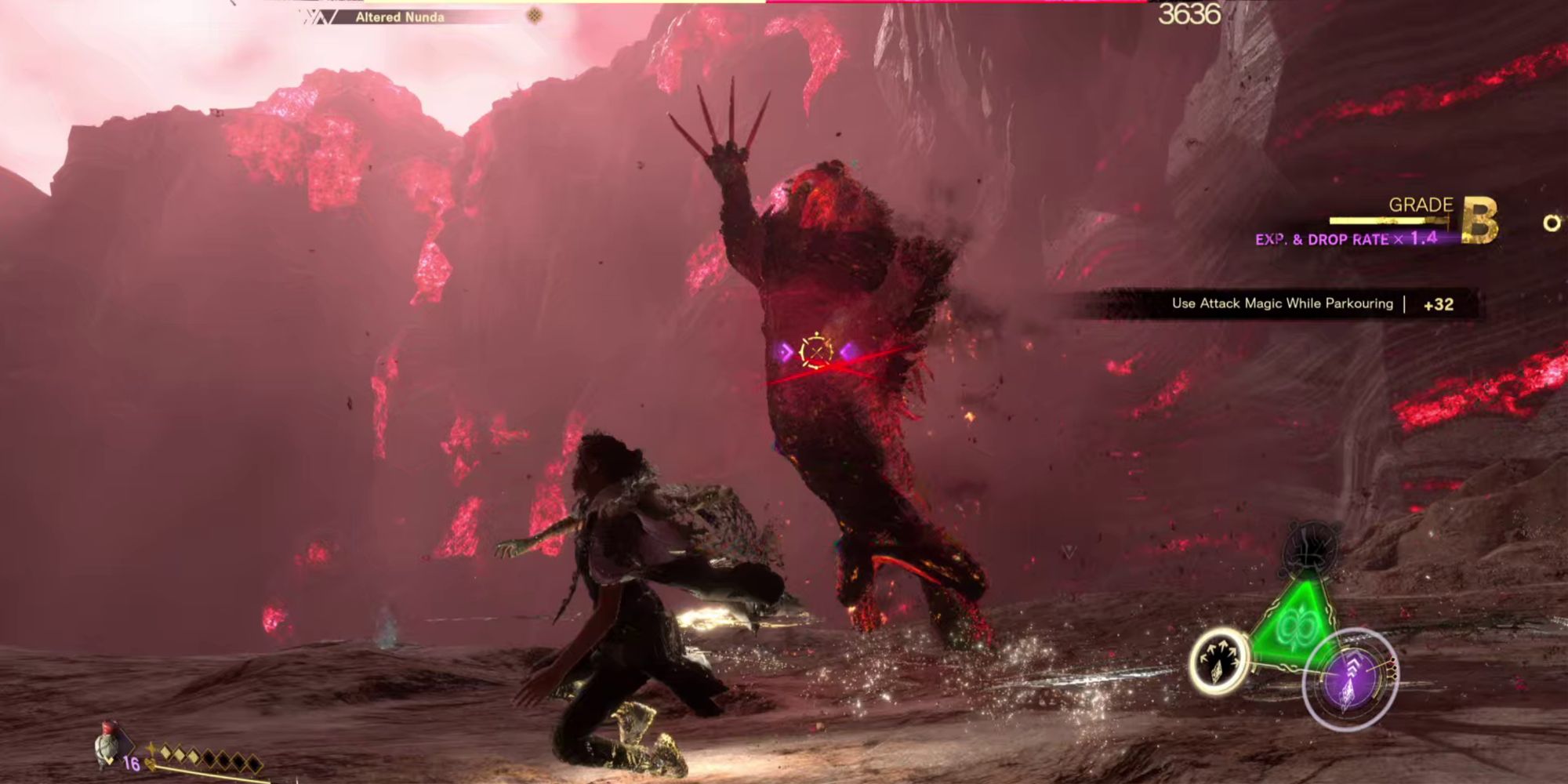 Before dealing with this Altered Nunda, it's important to deal with the Argentavis hanging around it. These birds can be a big distraction during a fight, so take them out as soon as possible. Disperse should help greatly with this, as it seems to love targeting airborne enemies above all else and has a great range.

The Altered Nunda is a very aggressive enemy and bounds across the battlefield with its attacks, not simply to make attacks, so you'll have to dodge a lot during this fight. For this reason, Stamina management is very important – you don't want to get caught out of Stamina with a huge cat bearing down on you. Use the moments where it's using its roar attack to buff itself up to stand still for a moment to let your Stamina recover, or, if you have the spell upgraded, use a Shimmy or two to recover Stamina points instantly.

As the Altered Nunda's most dangerous attacks are its battlefield-crossing leaps, it may be more advantageous to bring the fight to close quarters. Use the Arc Slice or (preferably) the Rage Slice attacks to inflict damage and keep a Crucible up to boost your damage and stop the Mutant from escaping your attacks. Combine the close quarters of the Crucible with a Legion summon and you have yourself a recipe for success. 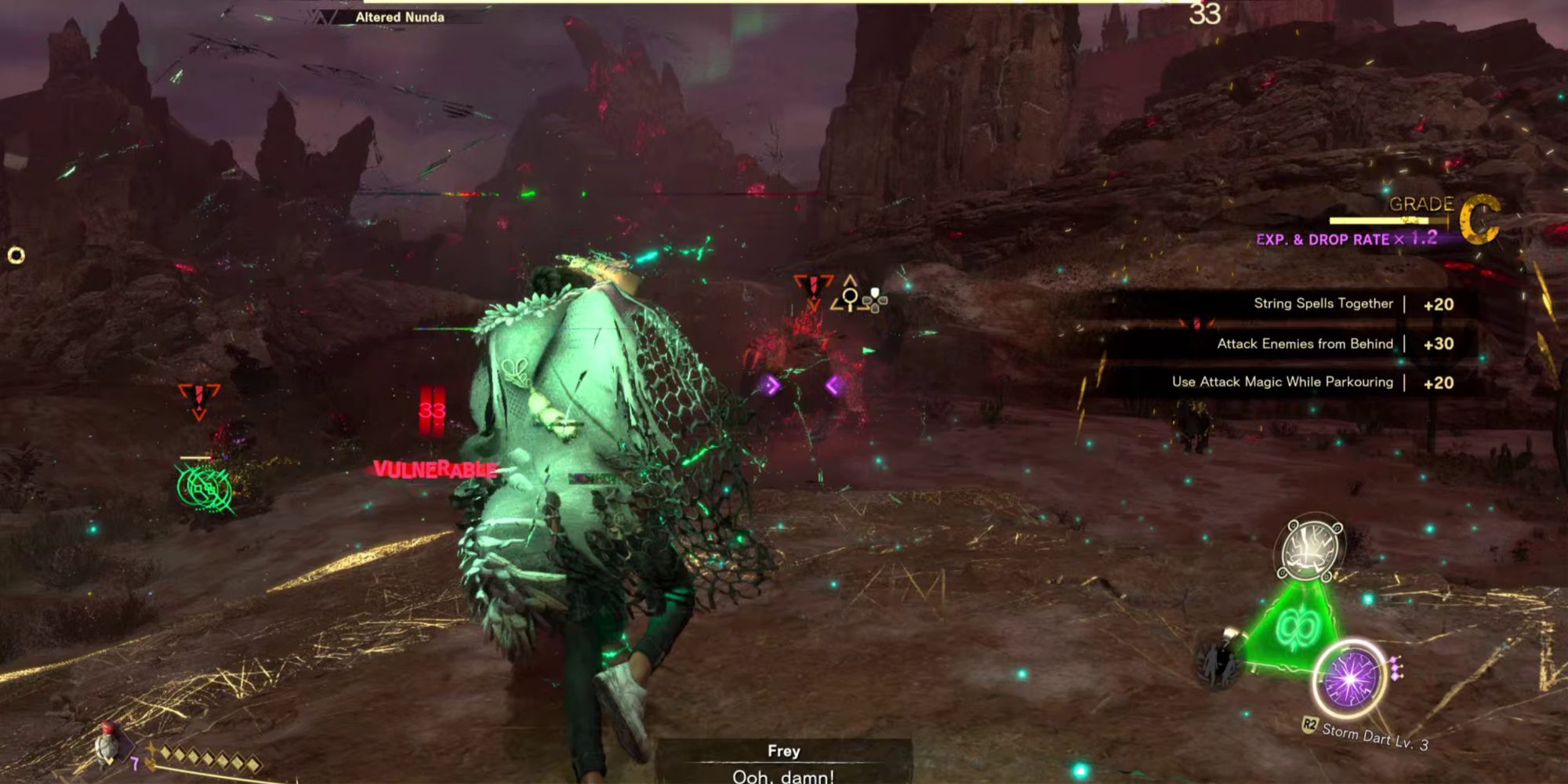 This Altered Nunda has a pack of Thylacoleo with it, making it a bit more dangerous than the other Nunda in Praenost. As a result, it's pretty important to deal with the Thylacoleo first. Not only will they make the fight far more hectic – they are also very agile big cats – but there's a possibility that the Altered Nunda's annoying roar buff might also affect them.

It would be a good idea to open the fight with a big blast of Surge Magic to try and take the Thylacoleo out as soon as possible. A Tempest (Olas's Magic) would be perfect, but a Conflagration (Sila's Magic) will work in a pinch.

Once you've beaten the Thylacoleo, the fight against the Altered Nunda plays out like the other fights against the Praenost Nunda population.

The Path Of Glory – Altered Nunda 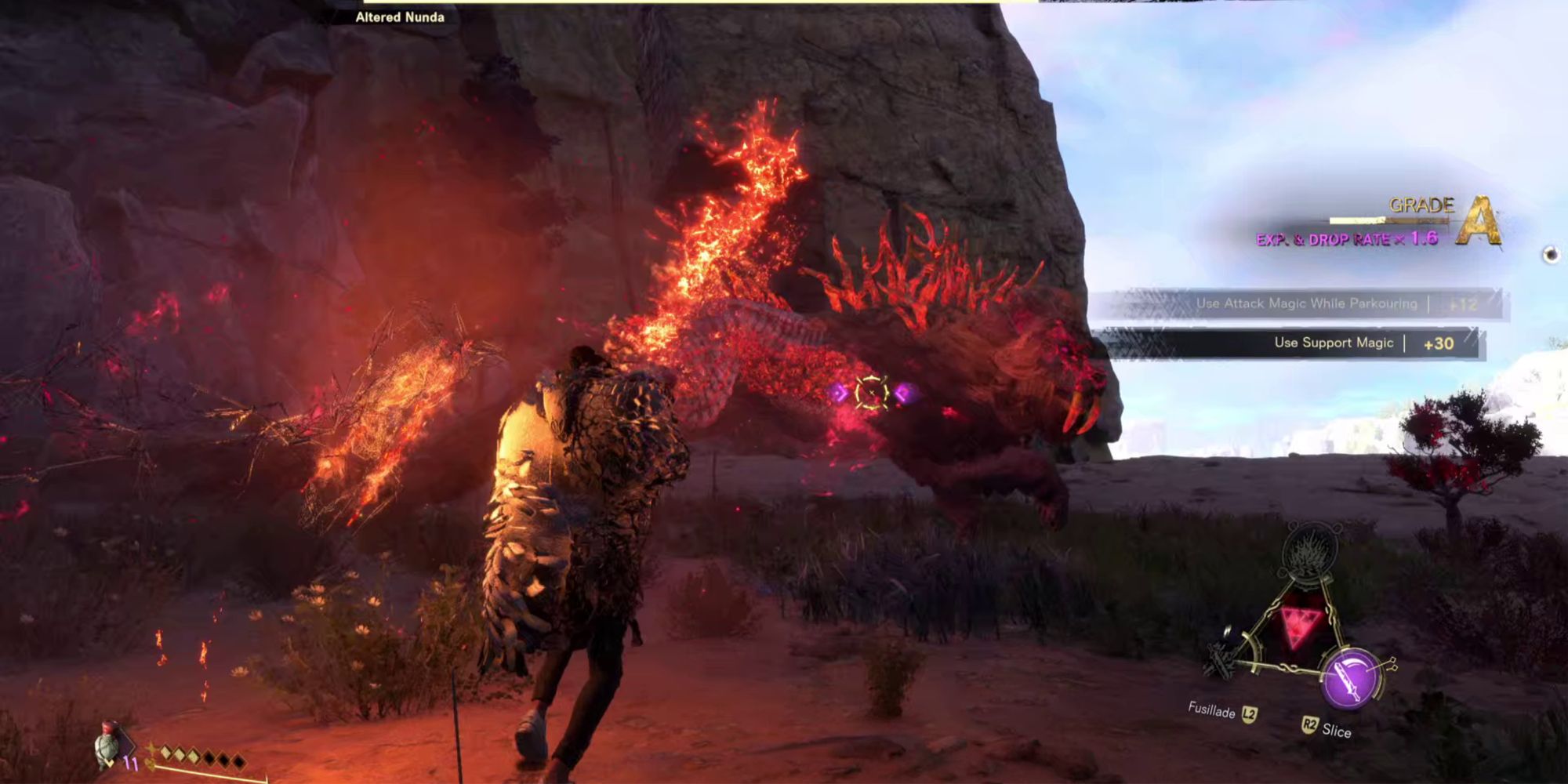 This Altered Nunda is on its own, making it possibly the easiest of the bunch. The only complication could be the fact that you are fighting in a wide-open area, making it very easy for the Altered Nunda to set up its powerful and extremely fast leaping attacks.

Fields Of The Fallen – Altered Aiolornis 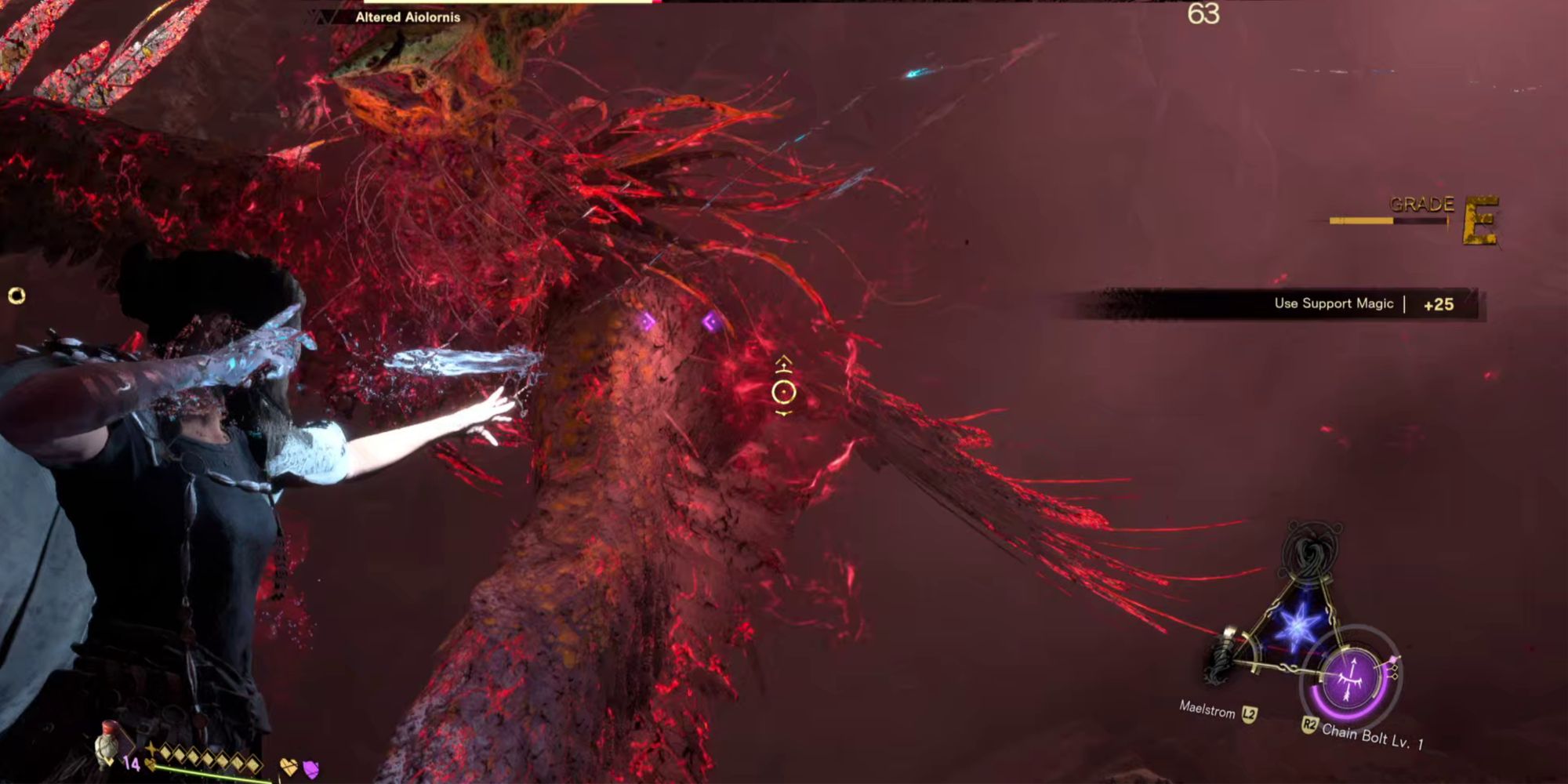 This is the hardest Mutant fight in Praenost, hands down. The reason for this is that the Altered Aiolornis is not alone – it has a flock with it, consisting of regular Aiolornis and Argentavis.

The many birds that you're up against – big birds at that – make this fight a hectic mess. The best strategy is to take out the normal enemies first and then focus on the Aiolornis, but this is easier said than done – getting struck by birds just out of sight while you're charging up spells is almost a certainty, so try to keep most of your damage from mid-Flow aerial attacks.

It's definitely better to wait until you've beaten Tanta Prav before you take this fight on – not only will you be stronger overall, but Prav's Magic has the speed and range necessary to counter these birds really well.