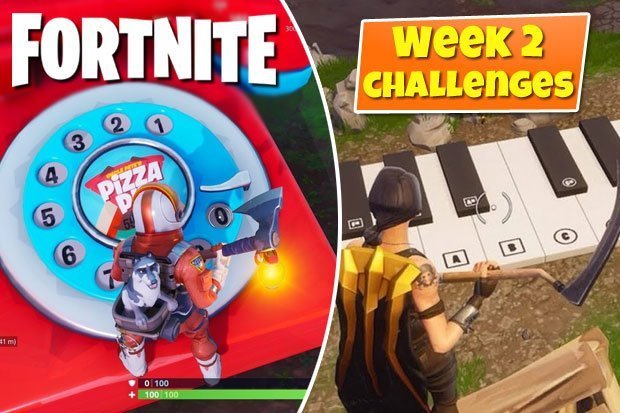 Fortnite Week 2 Challenges are coming to Season 9 today, and that means another selection of free and Battle Pass challenges will go live in the game.

There’s plenty for fans to tick off their list in Week 2 should they plan to keep levelling up the games, but one of the more tricky challenges Battle Royale players will need to complete involves visiting some strange points of interest.

The exact name of the challenge is: ‘visit an oversized phone, a big piano, and a giant dancing fish trophy’

Completely normal that one. If you’re struggling to find the oversized phone, big piano or giant dancing fish, don’t worry.

It’s important to complete as many challenges as possible to level up that battle pass. And once you complete this particular task you’ll earn yourself five Battle Stars, and part of the way towards the 5000 XP on offer for completing four of the seven Week 2 challenges.

Read on for our latest Fortnite Season 9 Guide.

Where is the oversized phone in Fortnite?

Assuming you’ve only just started playing Fortnite, you might not realise that several oversized phones were introduced into the game during Season 8.

The good news is that they’ve remained on the map in Season 9 and there are two oversized phones. So obviously aim for the one closest to the battle bus flight path.

The first oversized phone, which is bright red, can be found in E2 on the map, east of The block and north West of Lazy Lagoon. It’s pretty close to the edge of the map, and is a bright red van sized phone, so it’s pretty hard to miss.

The second phone can be found on F8 of the map, just on the edge of where the snow ends. It’s a white phone, so might be slightly trickier to spot, but then again, it’s still huge.

Where is the Big Piano in Fortnite?

The giant piano has been part of the map for a few seasons and can be located near Lonely Lodge in the J5 square on the battle royale map.

More specifically look for it on top of a hill just north of the big empty mansion.

Where is the Giant Dancing Fish Trophy in Fortnite?

The last step is to visit the giant dancing fish trophy, which used to previously adorn the front of one shop in Retail Row.

The Volcano, unfortunately, took care of that popular location back in Season 8 replacing it instead with futuristic Mega Mall.

So where is the giant dancing fish trophy now? Well it somehow escaped the volcano destruction and can now be found on a roof of a house just south of Mega Mall.

What are the Fortnite Week 2 Challenges?

If you want a reminder about the rest of the challenges available in Fortnite Season 9, Week 2, don’t worry, you’ll find the full list below:

• Launch off of Air Vents in different matches (5)

• Deal damage with pistols to opponents (500)

• Visit an oversized Phone, a big Piano, and a giant Dancing Fish Trophy (1)