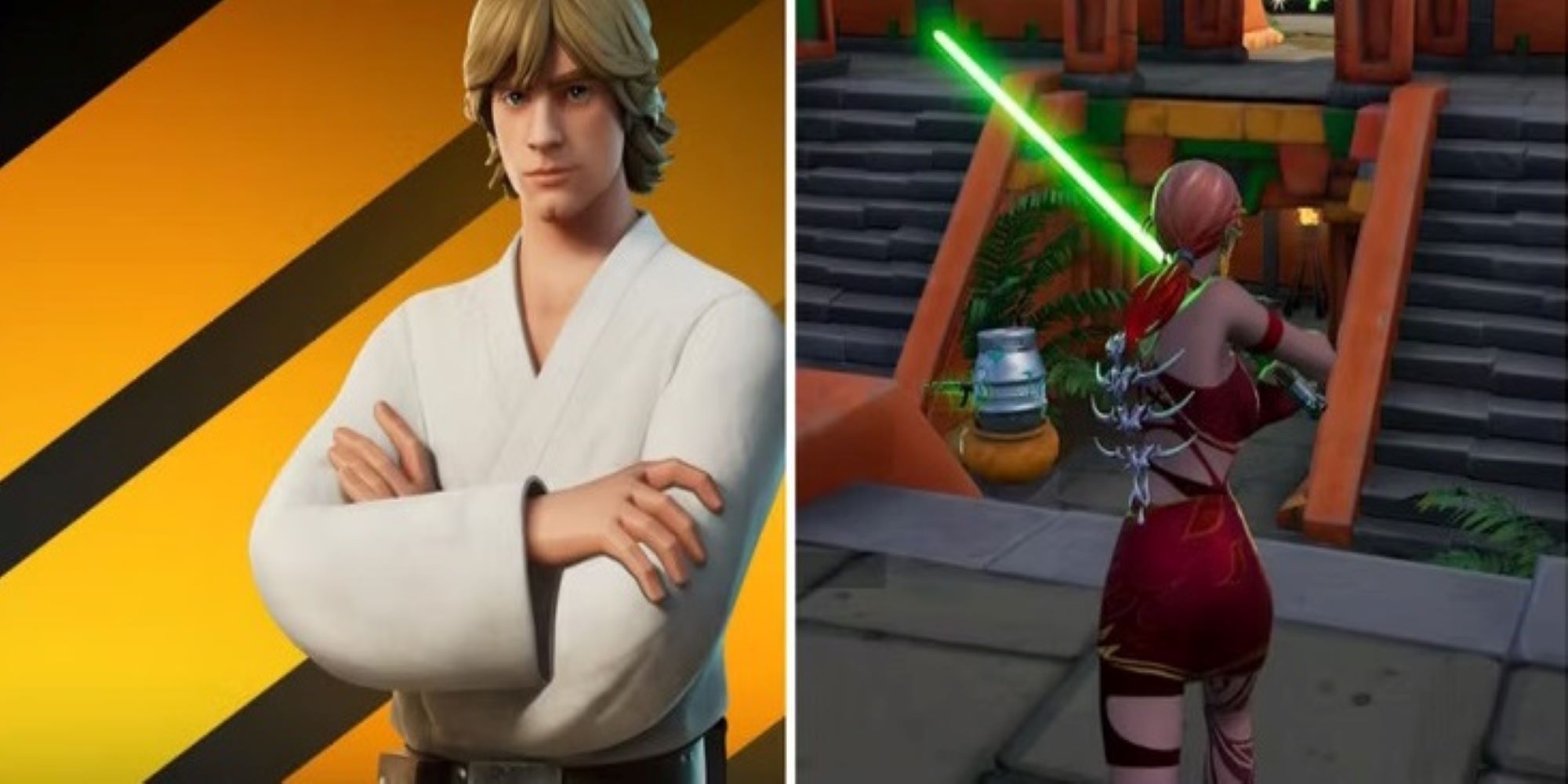 Take down these Star Wars-themed quests to earn some extra XP! Luke, Leia, and Han Solo have been added to the roster of Fortnite skins as part of another Star Wars collab. These skins will be in the Featured section of the Item Shop until the end of Skywalker Week and there's more.

On top of the new skins, there are also Star Wars-related quests that you can complete to gain more experience points and level up as there's only one month to go until Chapter Three Season Four comes to an end. You should be taking any chance you get to level up and get all the cosmetic rewards you can. Here's everything you need to know about Skywalker Week and its quests. 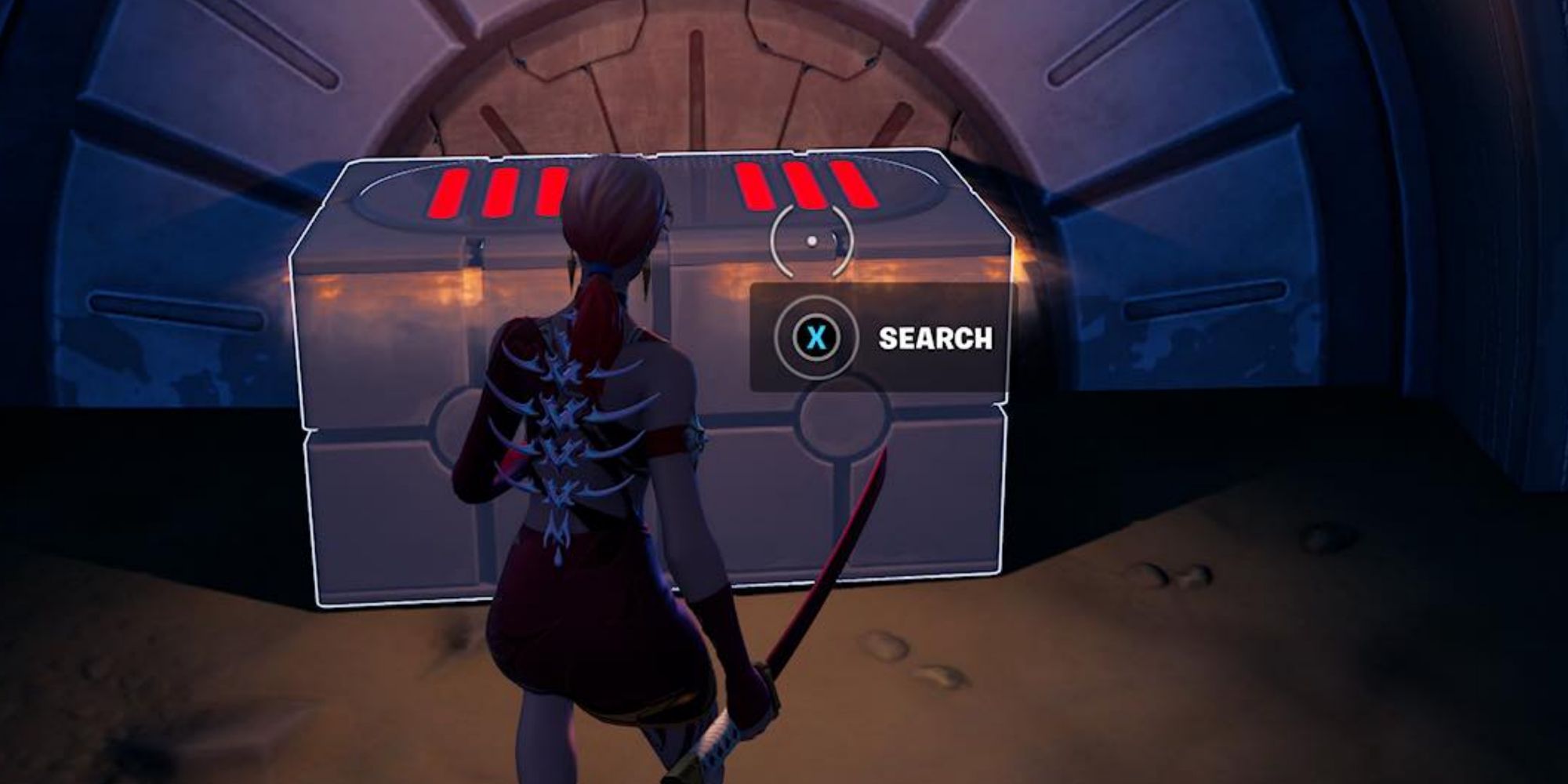 The Skywalker Week quests will be available until the next game update on November 8 at 9 AM ET. Some quests can be done in just a matter of minutes, but there are others that will certainly take a couple of days.

These quests are a great way to boost your season level — each time you get through one of the missions you'll earn 20,000 XP. 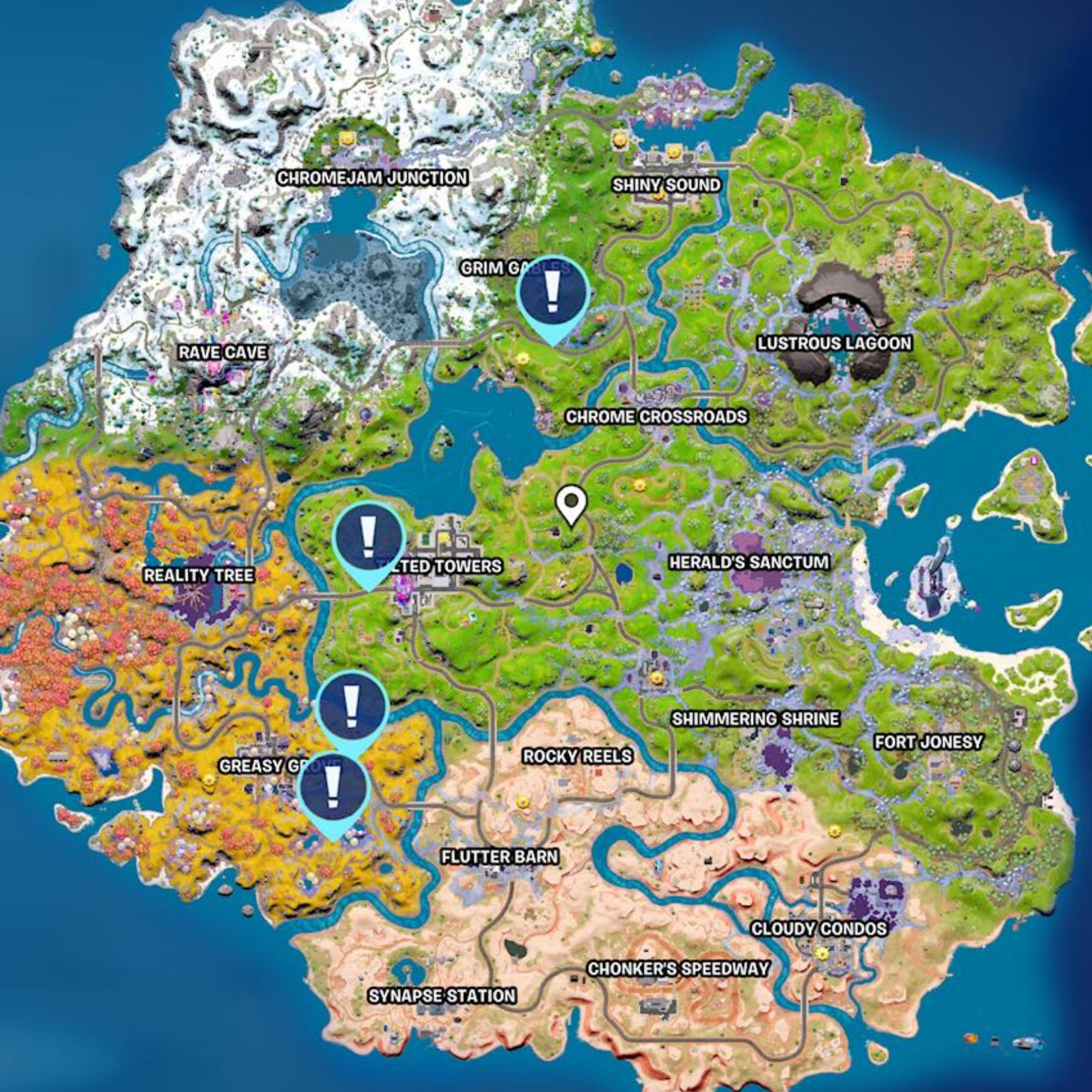 When you get to these locations, you'll see a small white building and the chest will be inside. Due to the lack of Star Wars chests on the map, this quest is difficult, and it can be incredibly frustrating.

Doing this in Team Rumble might be the way to go since there are fewer players, half of them can't deal damage to you, and the other half will spawn on the opposite side of the map.

Star Wars chests tend to give out a lot of loot — perhaps to make up for how rare they are. They'll give you four Chug Splashes, an E-11 Blaster Rifle, two lightsabers, and two Junk Rifts.

Stormtroopers are back for Skywalker week and you can once again speak to them to accept a bounty. They can be found in the same locations as the Star Wars chests. They patrol the roadblocks near Tilted Towers, Greasy Grove, and Grim Gables. 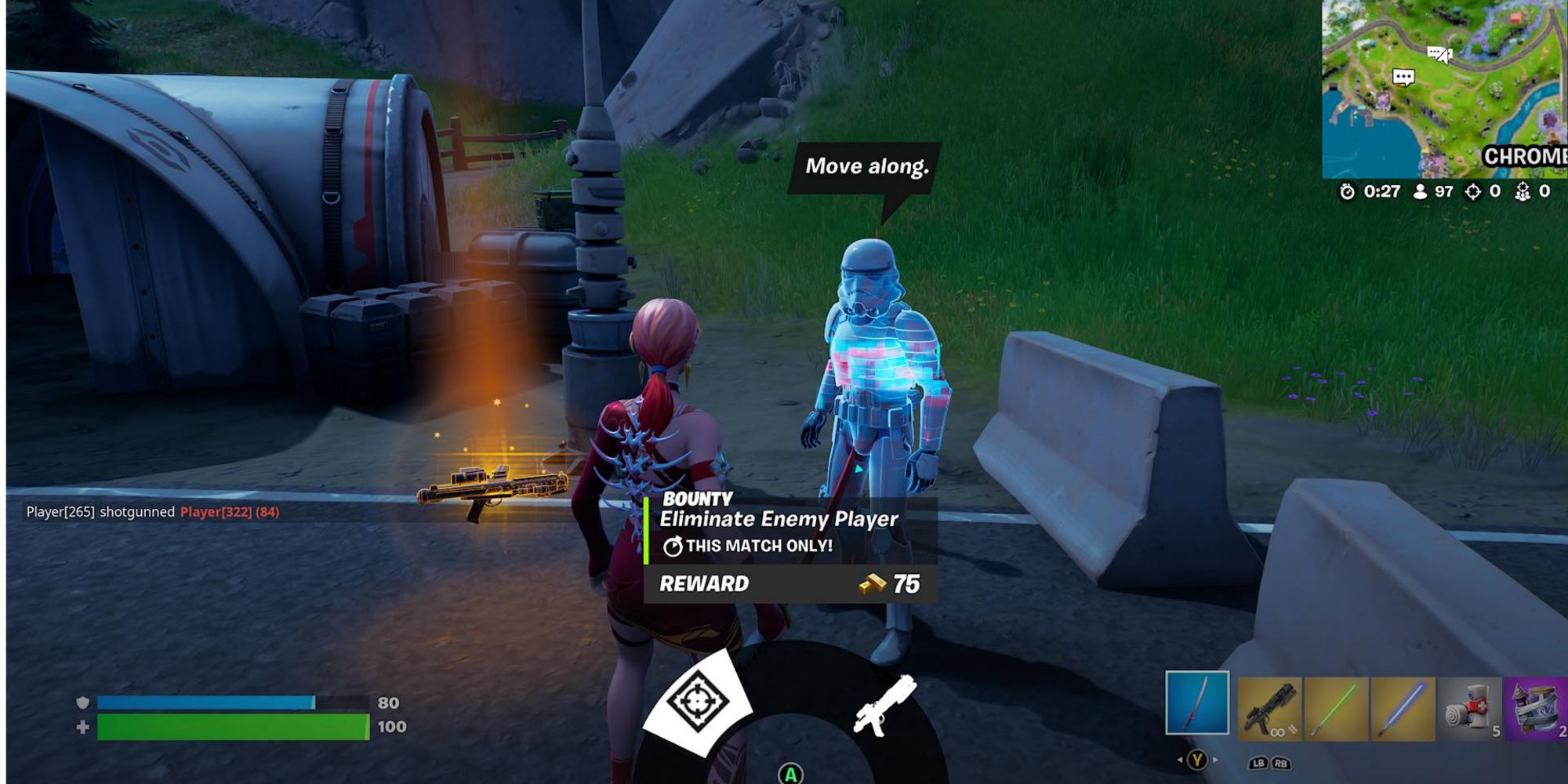 Approach one of the Stormtroopers at the roadblock and start a conversation. There are only two interactions you can have with the Stormtrooper: either purchase a Star Wars weapon or accept a bounty. Pick the latter and eliminate the player you're looking for to complete this quest.

Lightsabers aren't just melee weapons that you can use to hit enemies. They also have the ability to block shots fired by opponents. You can find lightsabers inside chests, Star Wars chests, and as floor loot. To block a shot using a lightsaber, press the "block" button/keybind — this is the same key that you would use to ADS with any regular fire weapon.

You can keep it held down, and it'll block shots, allowing you to get closer to the other player without being hit. This is a great way to defend, but opponents can also use it, and it'll be much trickier to deal damage to them as well.

Last season, when Darth Vader was part of the Battle Pass, he was also a boss on the map. This week for the Skywalker quests, he's returned. Before, he would land in a random location each game, but this time around, he's settled for the Overtaken Outpost landmark, southeast of Greasy Grove and West of Flutter Barn (on the other side of the river.) 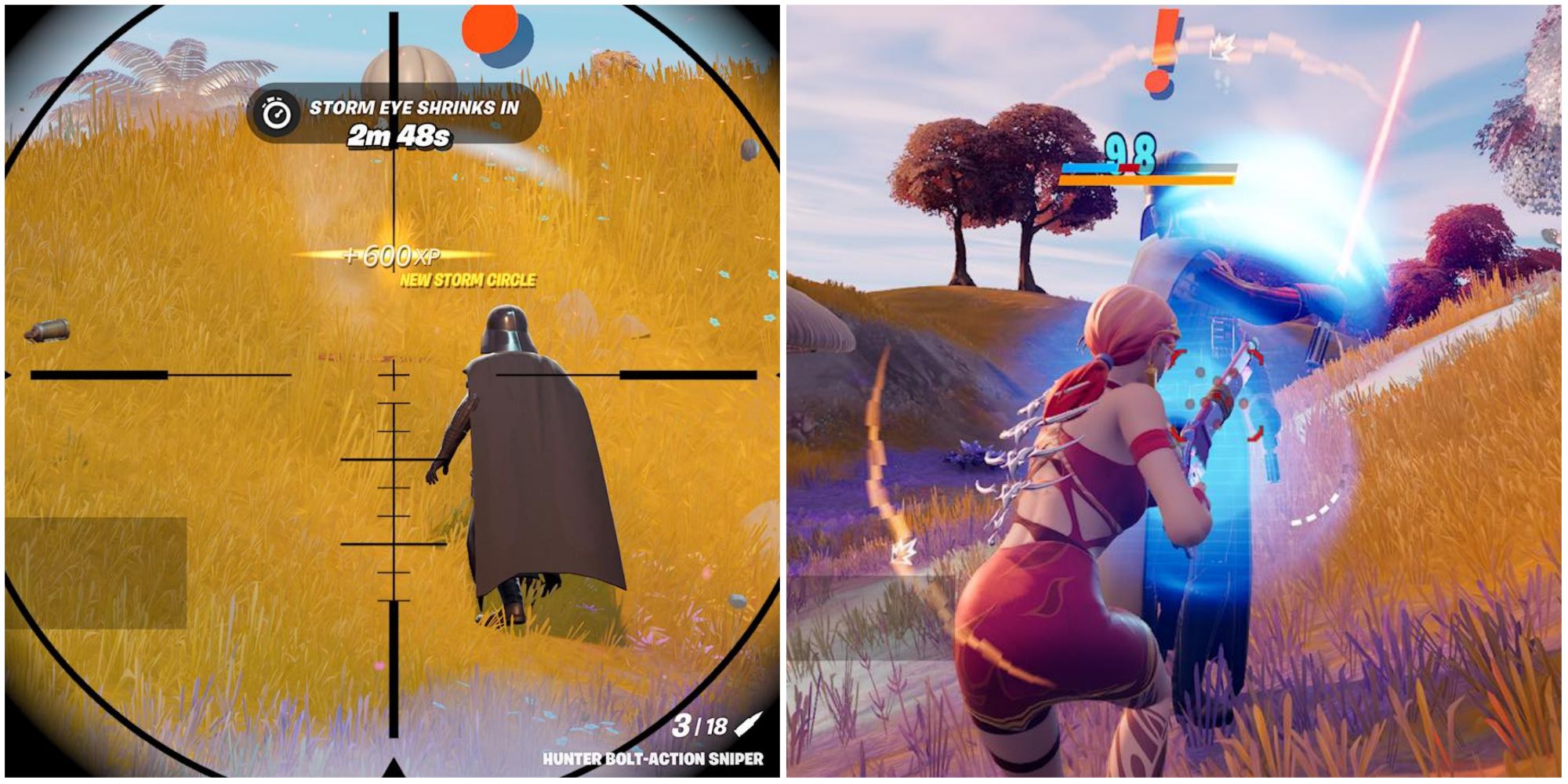 All you have to do here is assist in eliminating Darth Vader. You don't have to be the one that takes him down — as long as you hit him once, and he's defeated later on, it'll count towards your challenge progression.

Be careful when going to Overtaken Outpost. It's common for players to camp near these locations and take advantage of players doing their challenges to farm eliminations. Be sure to gear up and get some extra shields before going there.

Keep in mind that Darth Vader has a lightsaber as his weapon and he will attempt to block your shots with it.

​​​​​​​There are two types of Star Wars weapons in the game: the E-11 Blaster Rifle and the various types of lightsabers (Darth Vader's lightsaber, and Luke's blue and green lightsabers). The first stage only requires you to deal 1,000 damage, but you can then keep going and complete all five stages of the quest to earn even more XP.