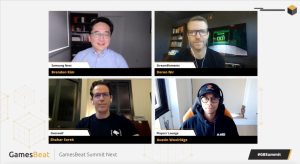 Monetization in gaming is growing beyond the professional, full-time gamers and streamers who can cash in on their fast-twitch muscles and being shared with hobbyists and casual players who are making money from their graphic arts skills, betting, and more. At the latest GamesBeat Summit Next event, Brendon Kim, VP, Managing Director, Global Head of Investments at Samsung Next, headed a panel discussion about the monetization strategies now available to the gaming community at every level, and possibilities for both professional and amateur players.

The panel brought together founders from three companies with very different paths to monetization: StreamElements gives live and video content creators the tools to create content, engage their audience, and monetize in a variety of ways. With Overwolf, third-party developers can build on top of existing triple-A games. The company has about 20 million monthly active gamers, more than 87,000 creators, and around 15 billion yearly downloads of mods and apps.

And Players’ Lounge enables gamers of all skill levels to bet on themselves and their favorite video games. The Players’ Lounge app, where players can bet against other gamers in head-to-head competitions or tournaments, or against the house, has facilitated more than $125 million in bets since 2018.

Paths to monetization with StreamElements

Video gaming content, meaning video content that is made primarily from video gameplay, is a relatively new medium, said Doron Nir, president and founder of StreamElements. It only emerged over the past five years, and it only started getting noticed by brands and sponsors over the last two to three years. It might be fair to say that the medium is exploding.

“There’s so much room to grow, because the audience keeps growing,” Nir said. “The more that younger generations consume that content, the bigger this category is. Because of that, it’s important to support both the newcomers and the top stars with the various different tools that they need.”

Right now StreamElements is used by more than 1.2 million monthly active creators, who range from people who are just starting to stream video on Twitch, YouTube, and Facebook for the first time, all the way to some of the biggest stars in the world, Nir said. How these streamers monetize evolves throughout their life cycle as content creators.

New streamers tend to use the platform’s audience engagement tools, with a major focus on building a community that will watch regularly and consume that content across all social media platforms. As they continue to grow, monetization kicks in, usually beginning with very simple strategies like merchandising and subscriptions. Brand sponsorships come when the subscription count across various platforms becomes significant.

“That is when the content creator becomes a one-person media company that can be generating millions of dollars every year,” he said. “At StreamElements we really try to support all these content creators across that life cycle. We know that the stars of three years from now are just starting to stream these days.”

The vast majority of video content creators are widely embraced by game publishers, and want to create connections with them, facilitating the communities that spring up based on their games. It has gotten to the point where the success of a game launch is measured, to an extent, by how many streamers adopt it and how much video content is created around it. Some game publishers and game developers are even building games with specific features that will appeal to gaming content creators.

But over the last four decades, the majority of IP owners have excluded those creators from their ecosystems because they were worried about IP infringement as well as the kind of damage that can mess up a player’s game. But the market has reached an inflection point, Sorek says. Because of games like Roblox and Minecraft, there’s a big demand growing for content creation like never before.

“The big IP owners, and in general the market, are looking for a solution where the gamer creators, or as we call them in-game creators, can work within an ecosystem of creating content on and with the game,” he says.

That means modding is not just about creating new things from the foundation of the game’s assets, but sometimes even developing completely new ecosystems that create new media entirely, and new ways for players to interact — for example, GTA NoPixel.

“It’s a very exciting time to look at expanding or creating on top of games you like,” Sorek says. “In that sense, Overwolf brought a business model to the market of in-game creators. Up until now [even if you’re] a modder creating a mod that’s downloaded by hundreds of millions, you’d still do that as a hobby.”

Overwolf offers a platform for these modders and in-game creators to make a living off their creations, and also to work hand in hand with some of the IP holders around creating new modding ecosystems. Game publishers and developers are not always on board with the idea, he says, but that’s where Overwolf comes in, he adds.

“Overwolf acts, de facto, like a sheriff,” he explained. “It has established relationships with the big triple-A. We work hand in hand into allowing certain types of creations to function on top of or as an overlay on their games. It’s a daily job of observing, marketing, making sure everything is working according to the conduct of the game developer.”

Modders are expected to stay within the confines of the developers’s rules. Overwolf will step in when an app developer causes a problem with an IP holder’s creation, to fix or shut down as necessary.

Their biggest modding community revolves around Minecraft, and the size and success of Minecraft communities are in part why the triple-A developers that were against modding, or kept modding at arm’s length, are now coming around.

“They understand that if their game is going to last and have a chance to live, they will need to allow for constant content iterations on that game, and we see that prolongs the shelf life of a game, engagement, and community,” he said. “The IP needs to be great, the core experience. That’s what the game studio should do. But the actual operation of the game is around content, whether it’s created content, ecosystems of content, streaming content — that’s the name of the game moving forward.”

Players’ Lounge and the democratization of esports

Esports is booming on a professional level, but until very recently, only a very small percentage of gamers could actually make money solely through their gaming skills. Other avenues, such as content creation or streaming are amazing tools to allow gamers to monetize their skill sets, but they still require additional skills in order to do that, increasing the barrier to entry as a non-professional, said Austin Woolridge, Co-Founder and CEO, Players’ Lounge.

With professional esports, similar to traditional sports, there are tens of millions of gamers out there competing for a very small handful of professional spots. The NBA2K league, for example, has hundreds of thousands competing at a very high level to play in 265 draft spots. Fortnite had millions competing to qualify for only 100 Fortnite World Cup spots.

The vast majority will never go pro, and the millions of gamers who don’t make it create a huge demand for opportunities that allow amateur gamers to monetize their skills.

“There’s this vacuum that’s been created of people vying to be professional, vying to compete at a level where they can earn some money, but there are so few spots,” he said. “The opportunity is massive, because it’s not just the best of the best who want this opportunity to earn. There’s desire from all skill levels. A company like Players’ Lounge can touch all gamers in this regard, regardless of how competitive they actually are.”

That means a casual gamer can put down $25 to play against another casual gamer after work, or spend $10 a month for a tournament pass that provides access to a big prize pool, and more. The competition is fierce, because amateurs are gravitating toward the opportunity to earn real cash. Dozens of amateur gamers start on Players’ Lounge to find new levels of competition they couldn’t find in the game itself, and ended up going pro, he added, some of them even making a livable salary.

But the non-professional audience is vast, with as large a number of competitive goals — but all have the common interest in making money specifically by being good at their favorite game.

“There’s a different level of competitiveness when there’s even just a dollar on the line,” Woolridge said. “People gravitate toward places that can serve them the type of opponents to uplift their own skill sets.”