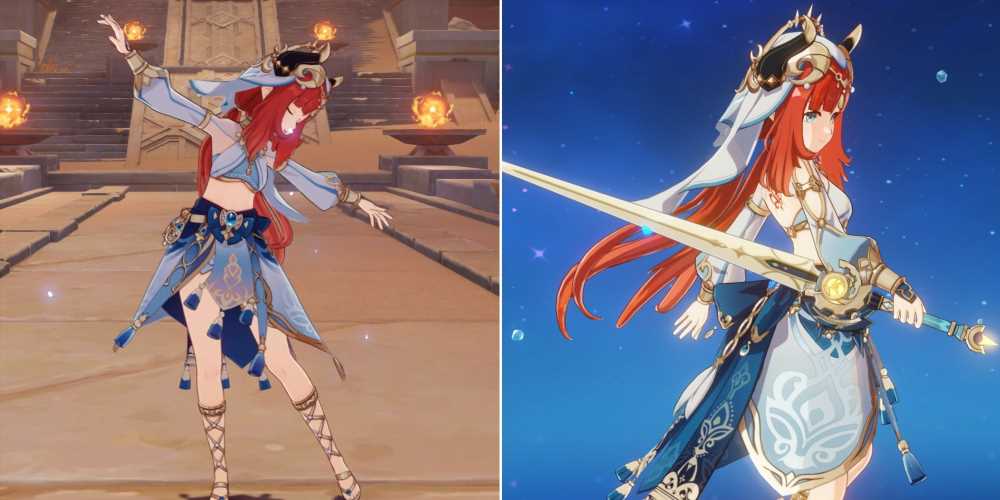 Being able to get different beautifully designed characters is one of the main attractions for Genshin Impact. It's an open-world game where you play as a Traveler who finds out different secrets of Teyvat as they travel to multiple nations in search of their lost twin.

Nilou is a five-star character with a Sword in her hand, and there are a bunch of choices for her weapon in the game. Weapon and Artifacts are two major components that affect a character's efficiency and usability, so you'd want to choose the best to make your character perform well. 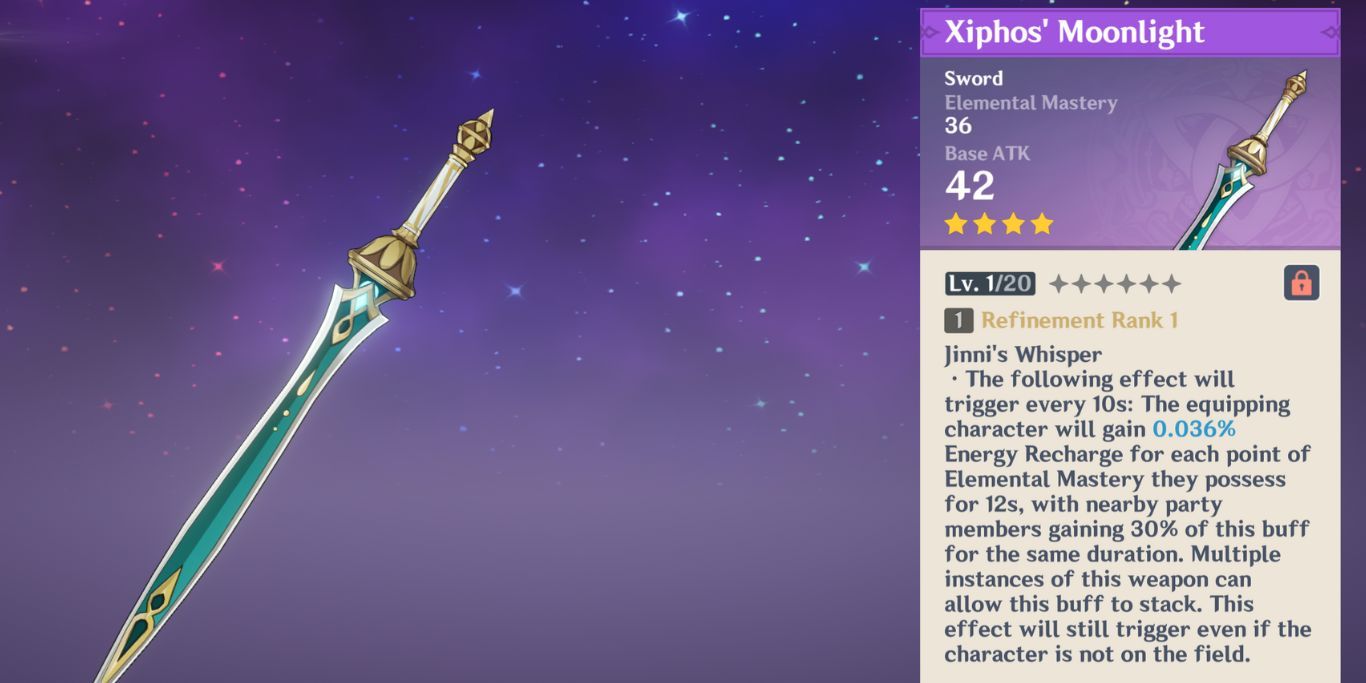 Xiphos' Moonlight is a four-star weapon that was released and featured for the first time during the second phase of the Version 3.1 update. Apart from 510 ATK, the weapon also gives 165 Elemental Mastery to the wielder. Nilou's main damage output is from reaction-based damage when she's used as a supporting character.

Elemental Mastery is the stat that decides how much damage you'll deal with your reactions, which already makes this weapon amazing on her. Furthermore, she gives an Energy Recharge boost to herself and the other characters in her party every ten seconds, which lasts for 12 seconds.

This boost is based on her Elemental Mastery as well. Since this boost can stack, you'll get double the Energy Recharge for a few seconds every time this buff is applied to her. 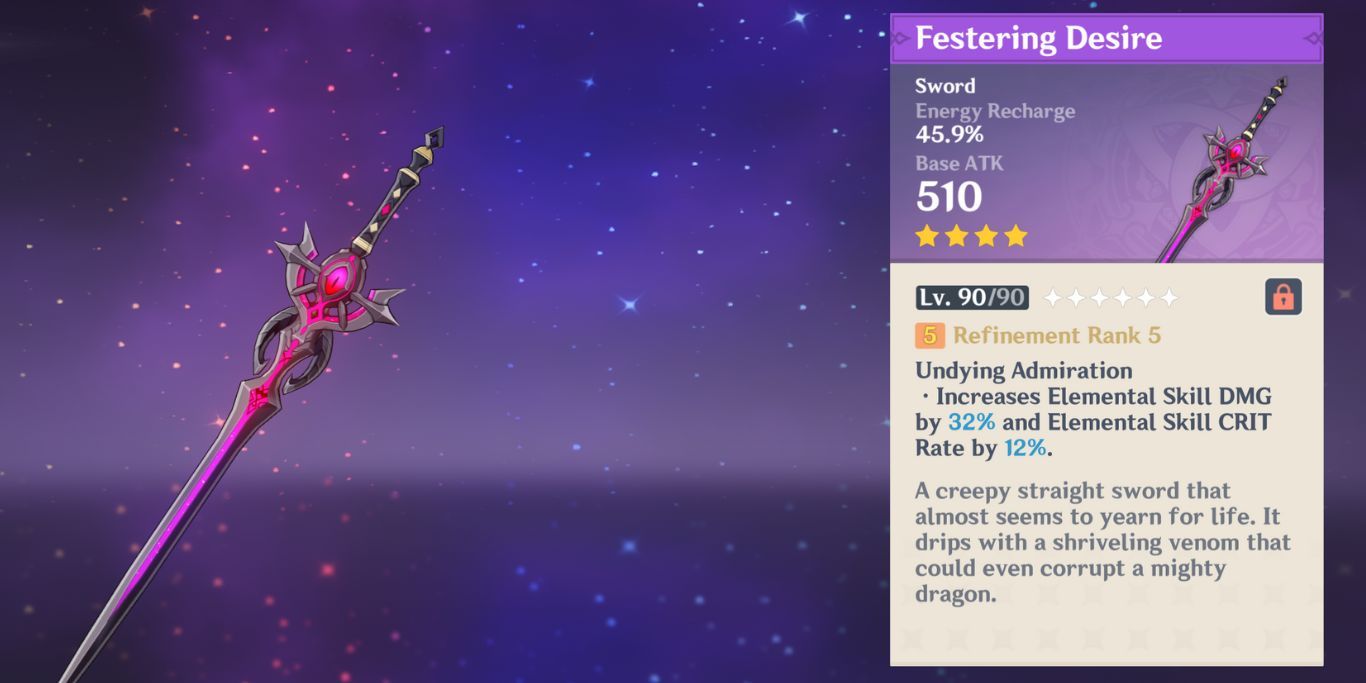 Festering Desire is an exclusive four-star weapon that could only be acquired during The Chalk Prince and the Dragon event during Version 1.2. The sword provides 510 ATK and 45.9 percent Energy Recharge to its wielder, which can be great for Nilou if you were lucky enough to get this weapon and its refinement for free.

While Nilou is easy to build, there are still quite a lot of stats you need to look for when you're farming artifacts for her. This weapon gives you a DMG Bonus and Crit Rate increase for your Elemental Skill, which makes it much easier to build this character.

Furthermore, this weapon is one of the best if you're planning to use Nilou as a DPS character. Her Elemental Burst and Skill can deal quite a lot of damage, and both of them are boosted by the Energy Recharge and DMG Bonus from this weapon respectively. 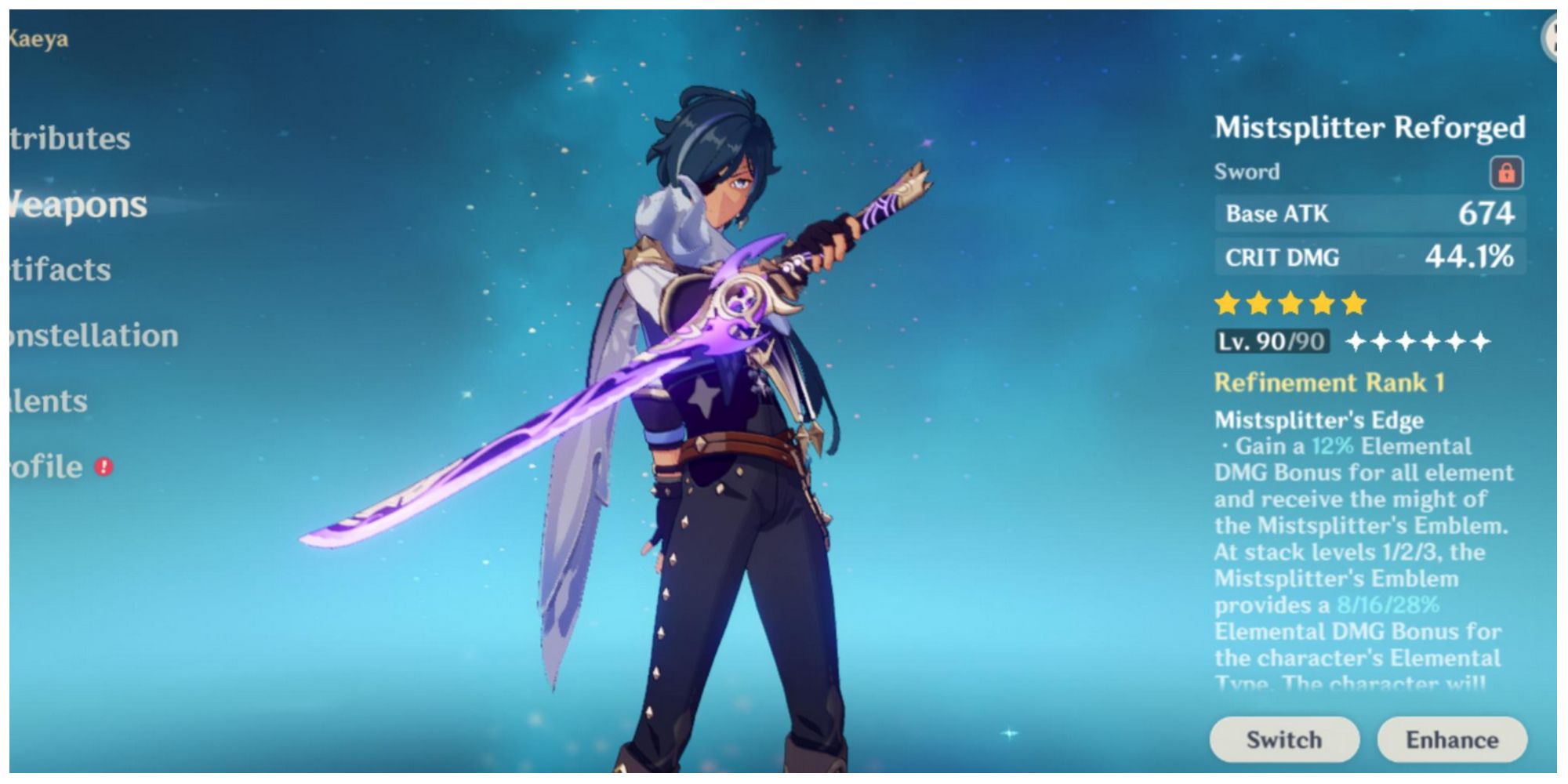 Another weapon that is amazing for the main DPS build on Nilou, Mistsplitter Reforged is Kamisato Ayaka's signature weapon. It provides a whopping 674 ATK boost and 44.1 percent Crit DMG at the maximum level to its wielder, which is already proving its worth for her.

Furthermore, you can get a bunch of Hydro DMG Bonus by using this weapon on Nilou. Firstly, it gives you a raw 12 percent boost at refinement one, and you can easily get two stacks for this weapon whenever you use her Elemental Burst. With the right amount of Energy Recharge, you'll find yourself dealing a lot of damage with this beautiful Hydro character. 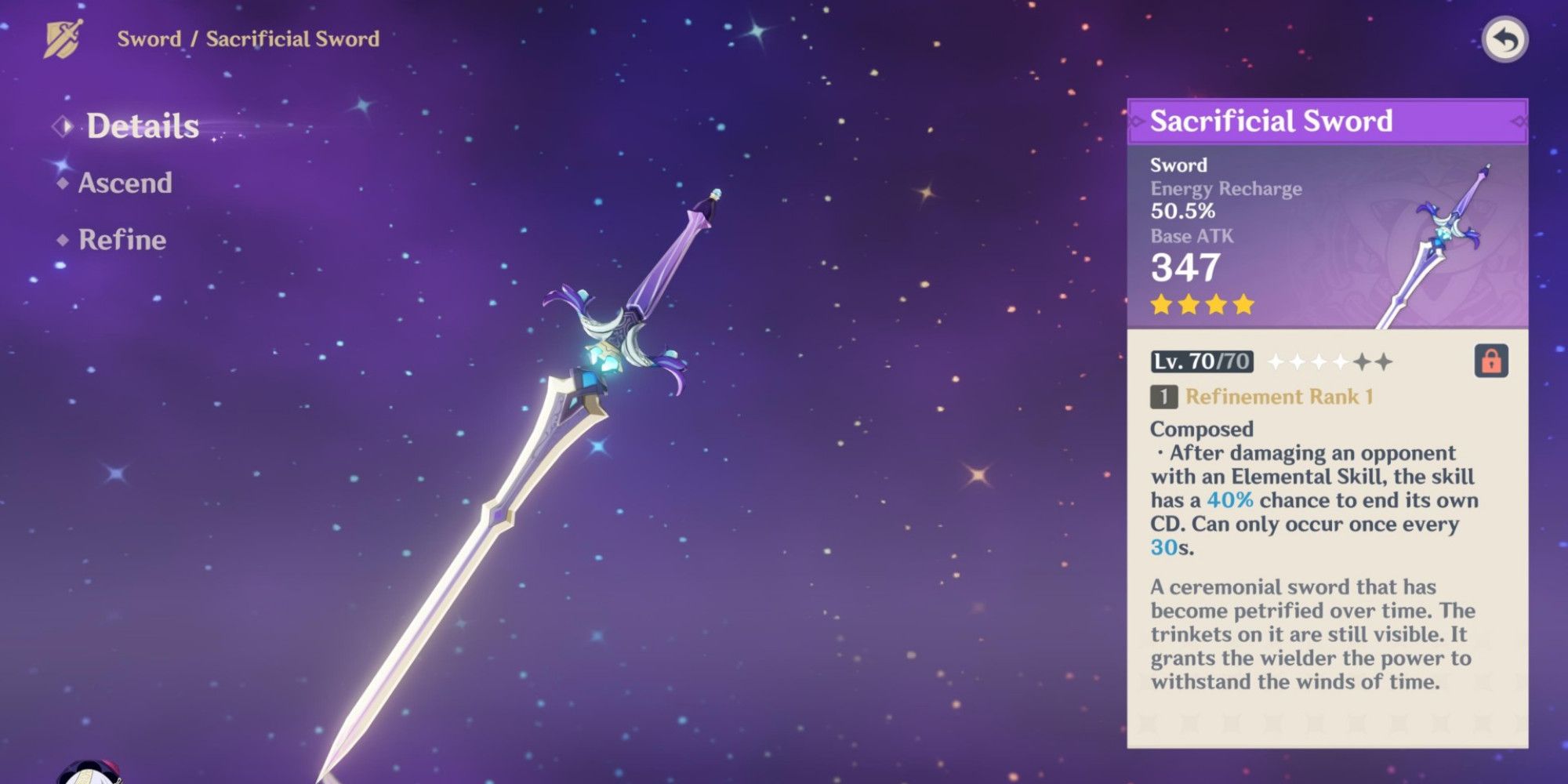 When there's talk about a character who can deal massive damage with her Elemental Burst, Sacrificial Sword can't possibly be left out. The weapon allows the wielder to have 454 ATK, which is a little lower than usual, but it also comes with 61.3 percent Energy Recharge.

This weapon fits perfectly for Nilou because the decrease in ATK doesn't necessarily affect Nilou since she scales on HP. Moreover, this weapon has a 40 percent chance of resetting the cooldown of your Elemental Skill whenever you deal damage to an enemy that is considered Elemental Skill damage.

Nilou's Elemental Skill can deal multiple instances of damage to the enemy in both stances. You can also use the AoE flower stance of her Skill the first time, and the Hydro-infused sword the second time, allowing you to have both of them at the same time. 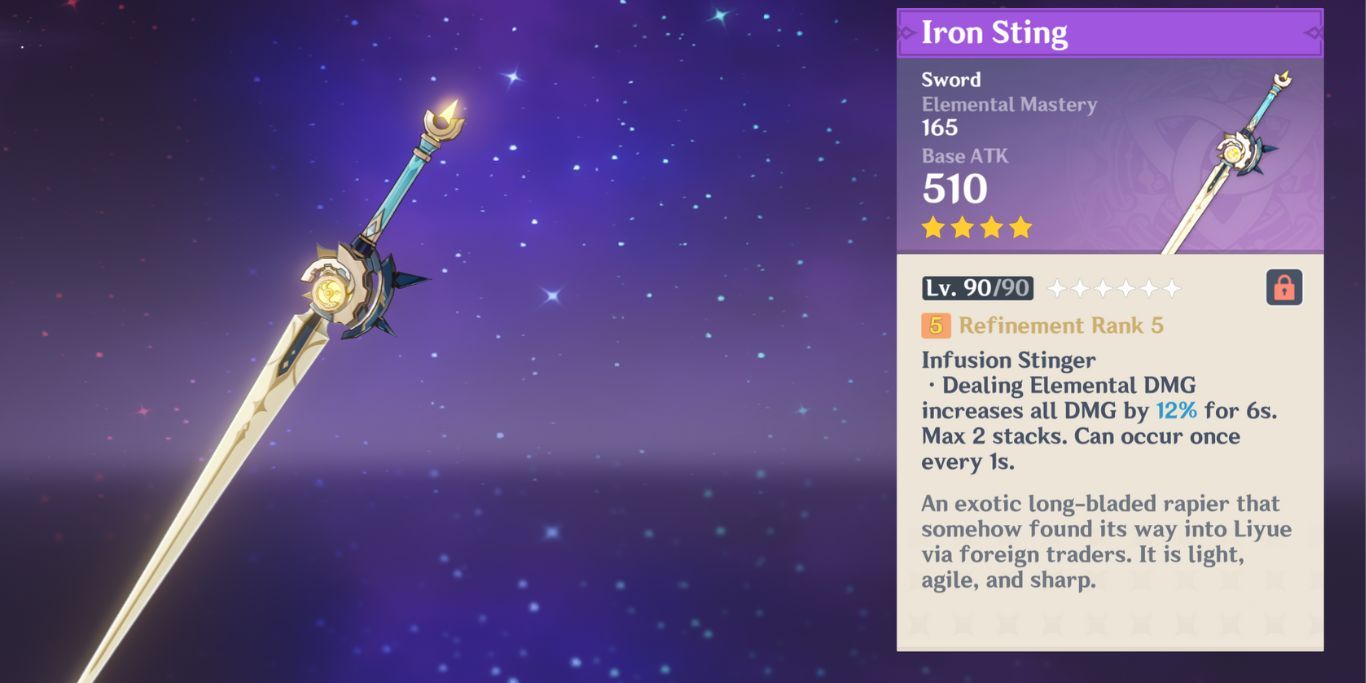 Similar to Xiphos' Moonlight, this weapon also gives you 510 ATK and 165 Elemental Mastery at the maximum level. Iron Sting is considered one of the best weapons for characters who rely on reaction-based damage.

If you're using Nilou as off-field support, you wouldn't need to use her Elemental Burst as much. This makes Energy Recharge a less-priority stat, making this weapon better than Xiphos' Moonlight. It buffs all your DMG whenever you deal Elemental DMG by 12 percent at refinement five. This effect can have up to two stacks. 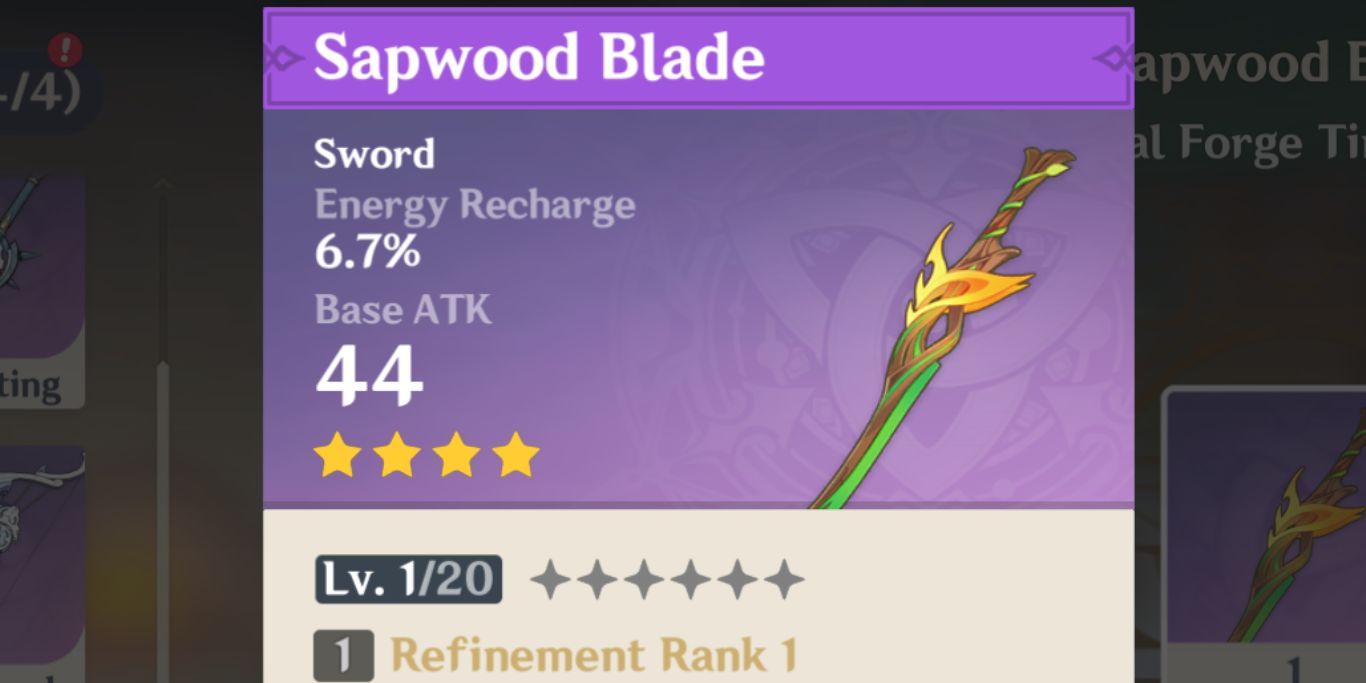 Sapwood Blade is a craftable weapon that can be acquired after following the main World Quest in the Sumeru Desert where you learn about the Aranara and their village. Apart from 565 ATK, it also gives you an Energy Recharge of up to 30.6 percent.

Nilou's two special passives rely on activating the Bloom reaction with her Bountiful Cores. This weapon gives you 120 Elemental Mastery for ten seconds whenever you trigger this reaction, but it can only be triggered once every 20 seconds. If you're using her on another team like Vaporize, this weapon can be quite useless since you won't trigger Dendro reactions. 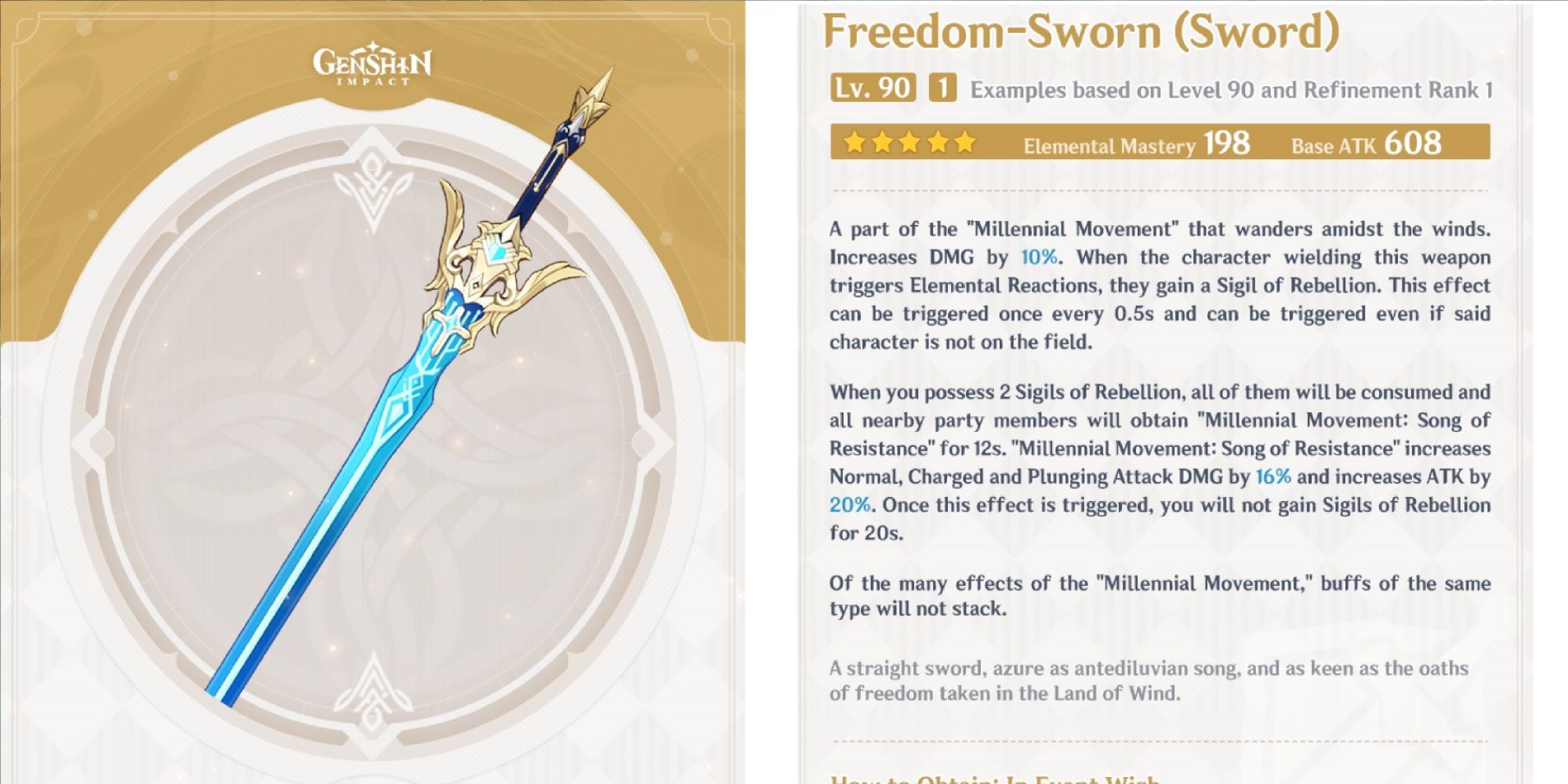 Known as the signature weapon for the beloved Kazuha, Freedom-Sworn contains an amazing 608 ATK and 198 Elemental Mastery as guaranteed stats at level 90. Furthermore, it provides a raw DMG increase of ten to 20 percent depending on your refinement of the weapon.

While Nilou is made specifically for triggering Bloom reactions, this weapon can make her a decent off-field Hydro applicator for Vaporize along with Yoimiya or Hu Tao as the main DPS. Upon triggering Elemental Reactions twice, it gives all party members a bunch of boosts for 12 seconds. 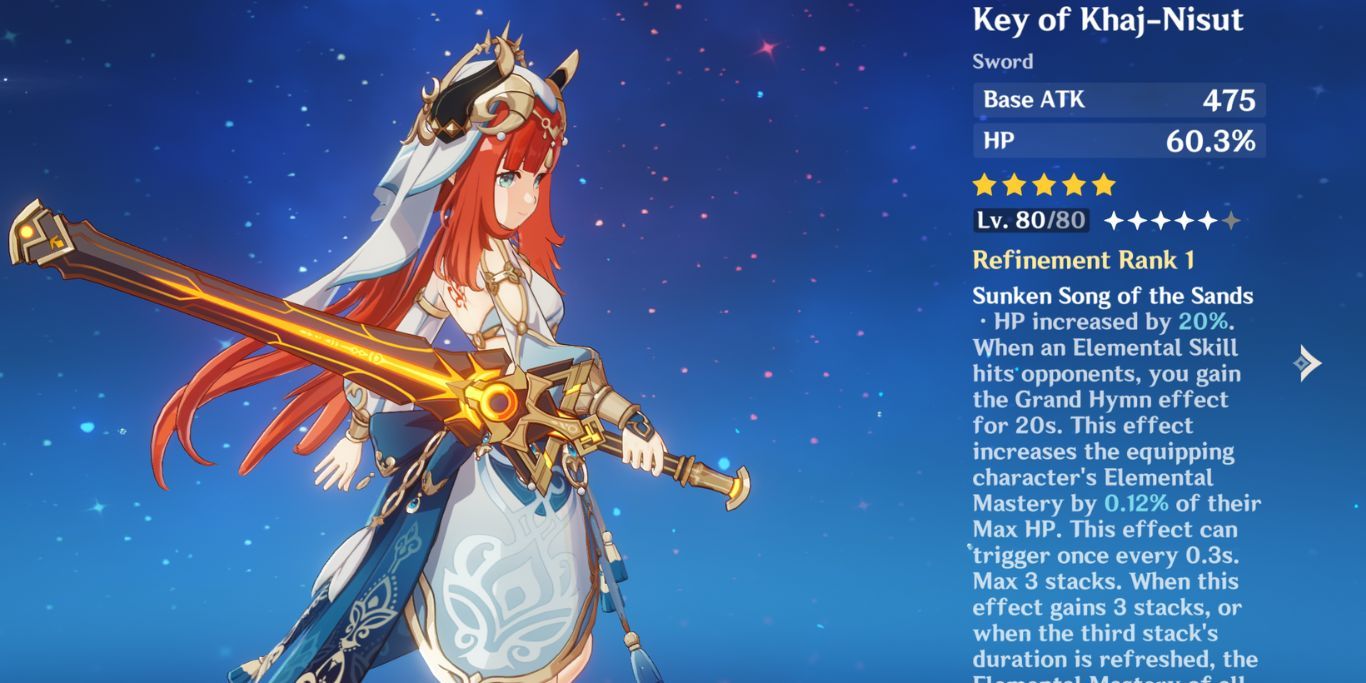 Once again, the character's signature weapon tops the list of the best weapons for them. Key of Khaj-Nisut was featured for the first time alongside Jade Cutter in the second phase of Version 3.1 on the weapon banner, and it gives 542 ATK and 66.2 HP Percent to the wielder.

Apart from giving another 20 percent HP boost in the passive, this weapon also allows Nilou to provide extra Elemental Mastery for herself and her party members. This effect makes it perfect for her since HP Percent and Elemental Mastery are the most important stats on her.