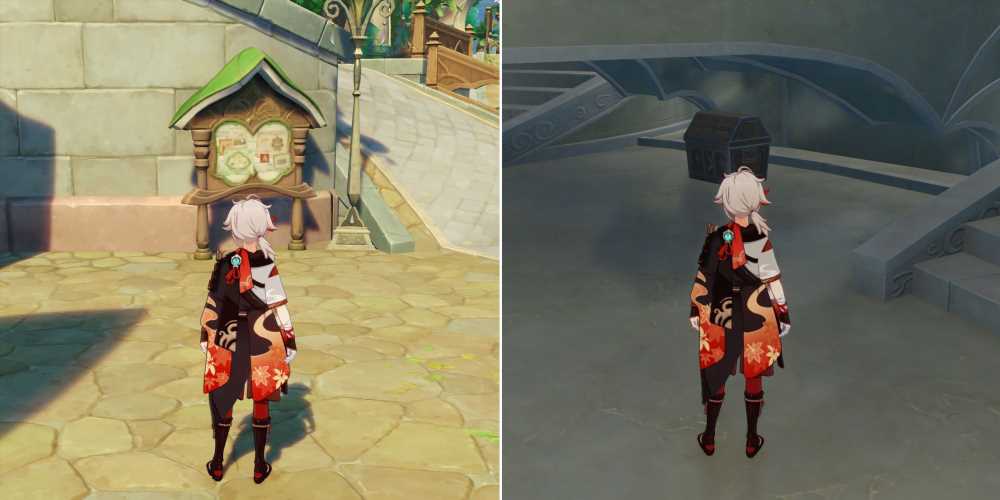 Secret puzzles have been giving the players of Genshin Impact a hard time ever since its release, and Sumeru is no different. The developers at Hoyoverse do a great job in detailing these puzzles to make them both easy and hard at the same time, which can leave some players scratching their heads.

The Sumeru City hidden puzzle was released alongside the Version 3.0 update that saw the release of Sumeru itself. Once you start it, you have to find a bunch of locations based on different riddles, until you can finally meet the creator of it and get your reward.

How To Get The Sumeru City Puzzle 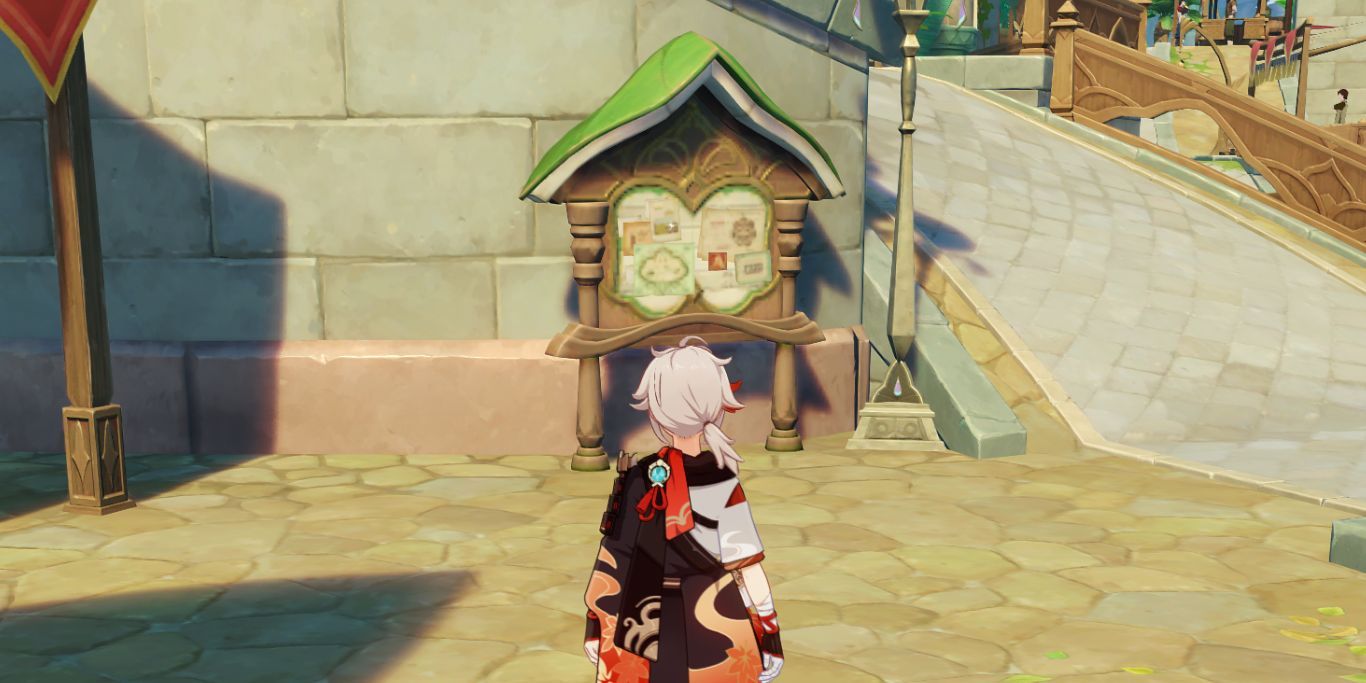 Katheryne is probably the most important NPC in Genshin Impact ever since the beginning, and you'll have to go near her to start this puzzle as well. Teleport to the southernmost Waypoint in the city, right above Yazadaha Pool.

Once you're there, head up the slope that you'd normally take to go to Katheryne, and you'll see a Billboard shining on your left in the middle of your path. Interact with this billboard to start the puzzle, where Kamal will tell you how no one could ever solve these riddles.

It is important to note that if you're doing this puzzle for the rewards, you'll be quite disappointed. Regardless, Kamal will tell you that it was created by someone from the Akademiya. You'll get the first riddle on the bulletin board itself. 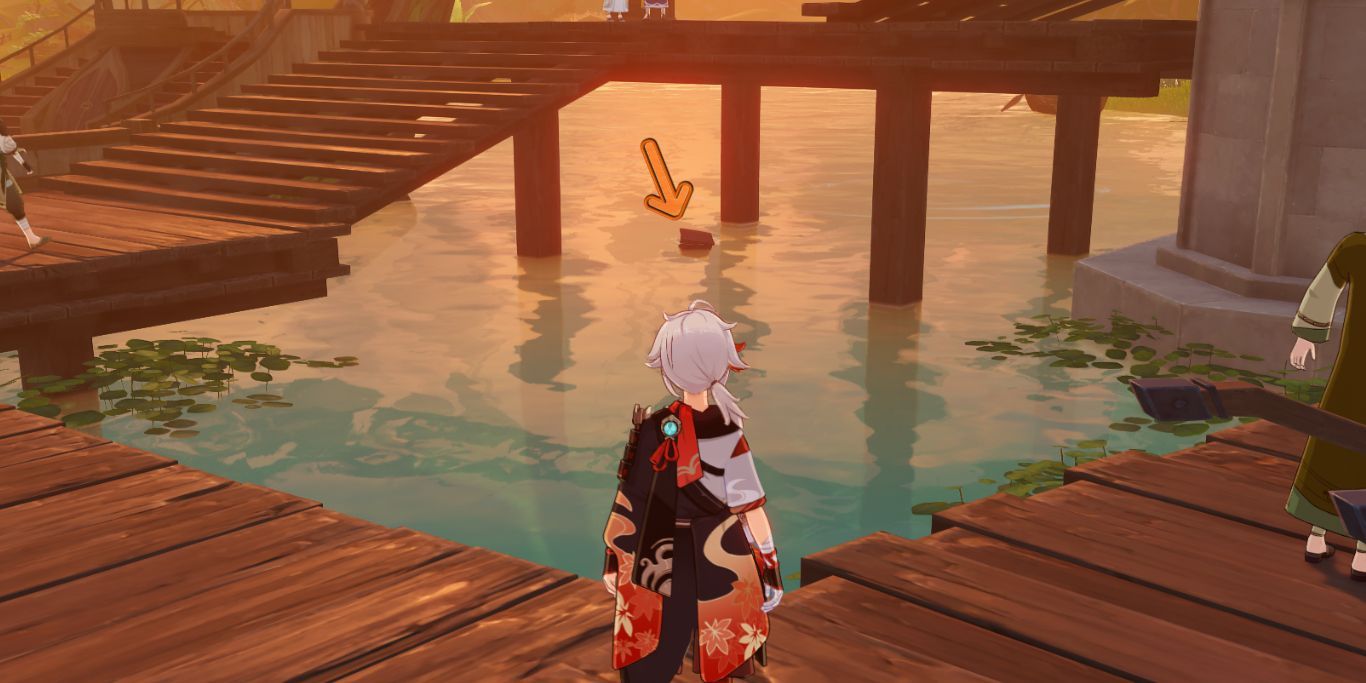 Riddle – In the light of alternating day cycles, one can see the homeward figure of the lighthouse on the beach.

To get the answer to this riddle, teleport back to the southern Waypoint in Sumeru city, and head directly southwest towards the little port area with a couple of ships docked. 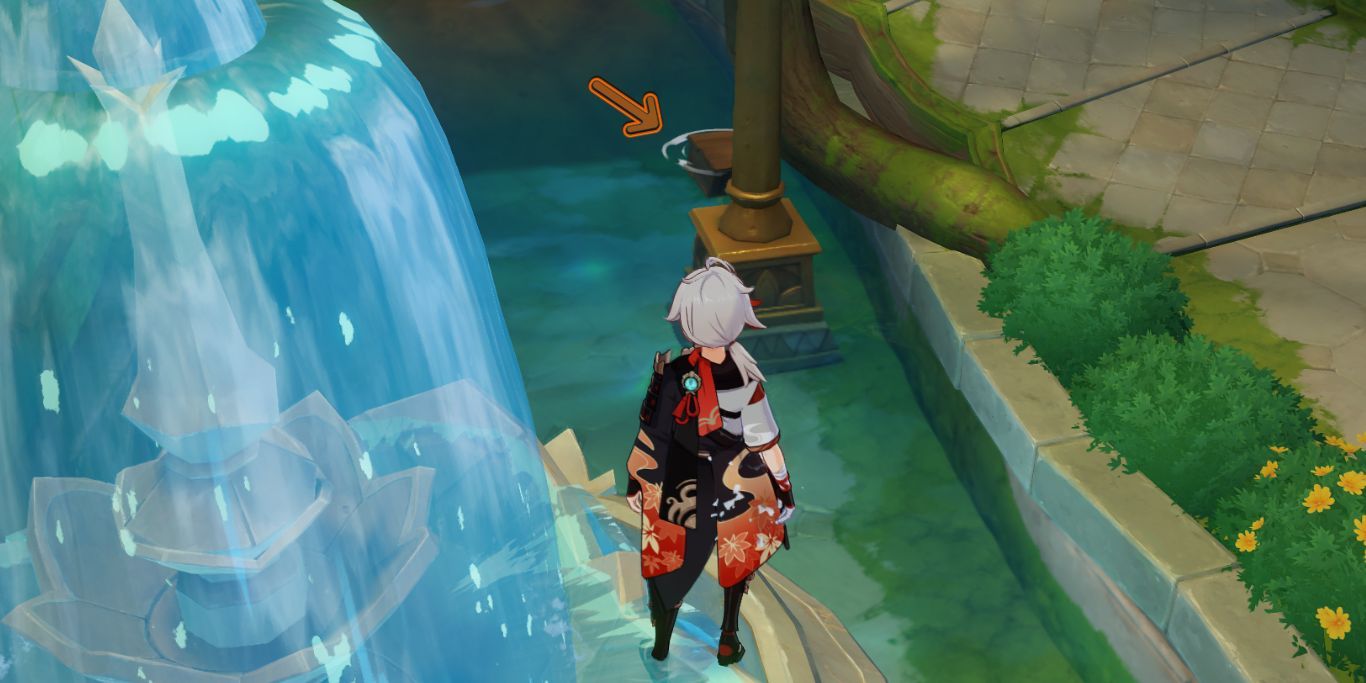 Riddle – A mirror not made of glass reflects every drama

If you've done the first and second Archon quest acts in Sumeru, you might be able to solve this one easily. While there are multiple ways to get it, the easiest one is to teleport back to the same Waypoint near Katheryne.

Keep heading up the slope and cross Katheryne until you reach a flat path with the Blacksmith on your left. Take the path on the left in front of the Blacksmith, and you will see a cave leading downwards. Follow this to reach the same area where you first met Nilou.

When you're in this area, look for the fountain on the right side of the main stage, and you'll find another small brown box at the edge of this pond, giving you the next riddle. 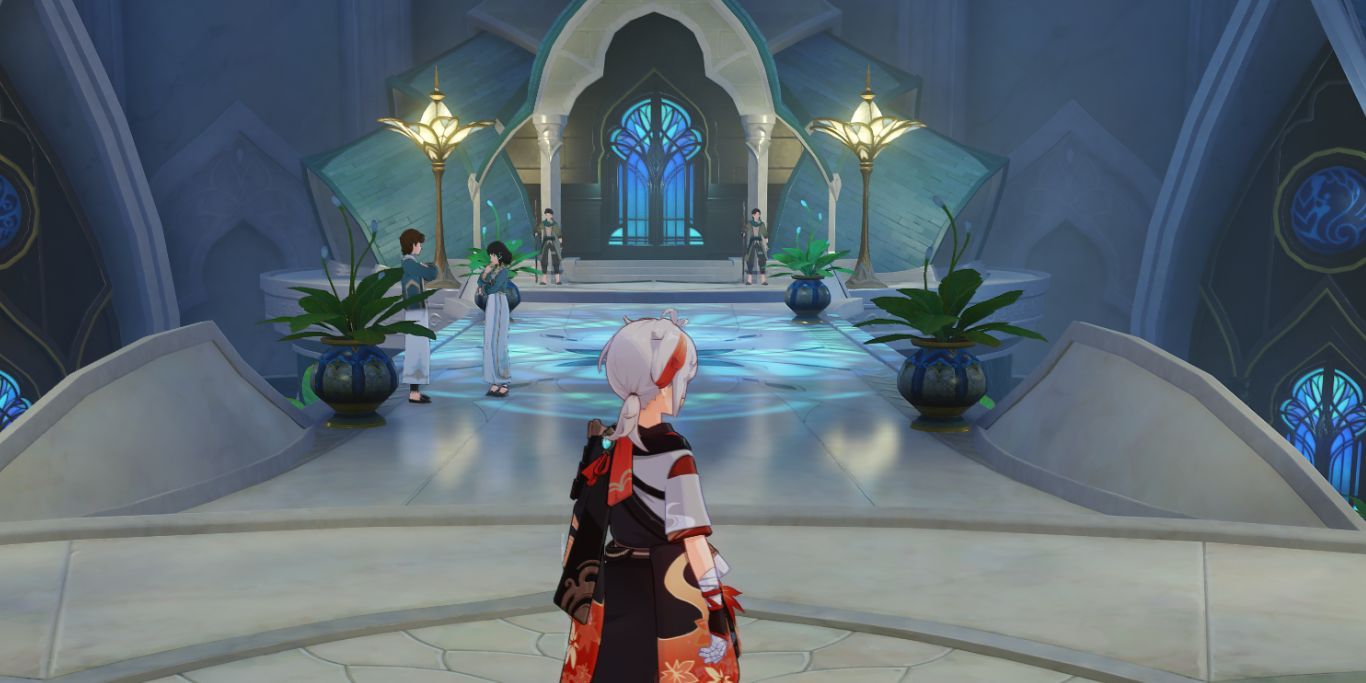 Riddle – The sole path to knowledge

As you can guess, this riddle leads you to the Akademiya, the place where information is treated as a resource in Sumeru through the Akasha. To get there, you need to teleport to the eastern Waypoint in the city just below the Akademiya Liaison Officer symbol on the map.

Once you're there, head up the path in the middle that will lead you directly to the Akademiya. Go through the first door which will open automatically, and keep following your nose until you reach another door that says Enter House of Daena when you get close to it.

Make sure you don't go to the doors on the left or right once you enter the Akademiya, as they'll lead you to different places. You need to head straight to the door mentioned above. 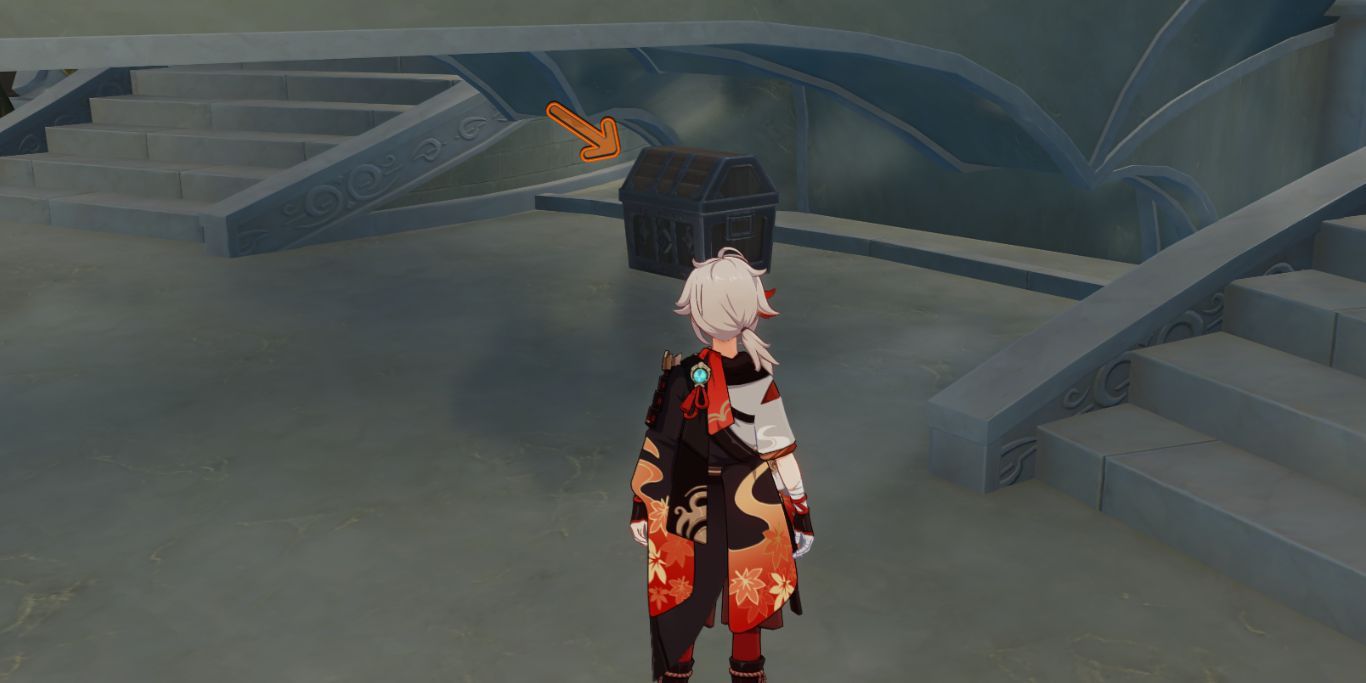 As soon as you enter the House of Daena, go down the bridge in front of you and there'll be an Exquisite Chest sitting at the bottom corner. This will house the next riddle for you. 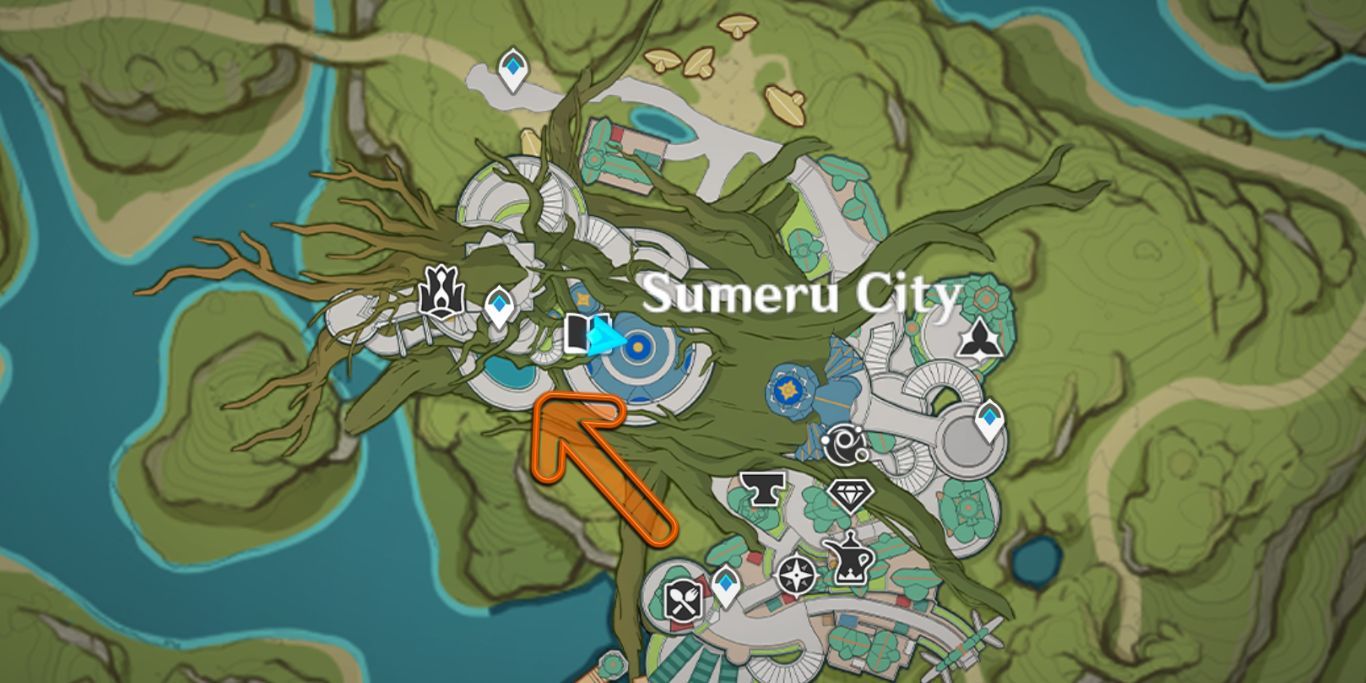 Riddle – The flowers in the pond are blooming, with watery pearls there lingering

To find the solution to this, head to the Waypoint on the western side of the city, right beside the Sanctuary of Surasthana. Once you're there, jump down from the southern side to reach the pond shown in the picture above. 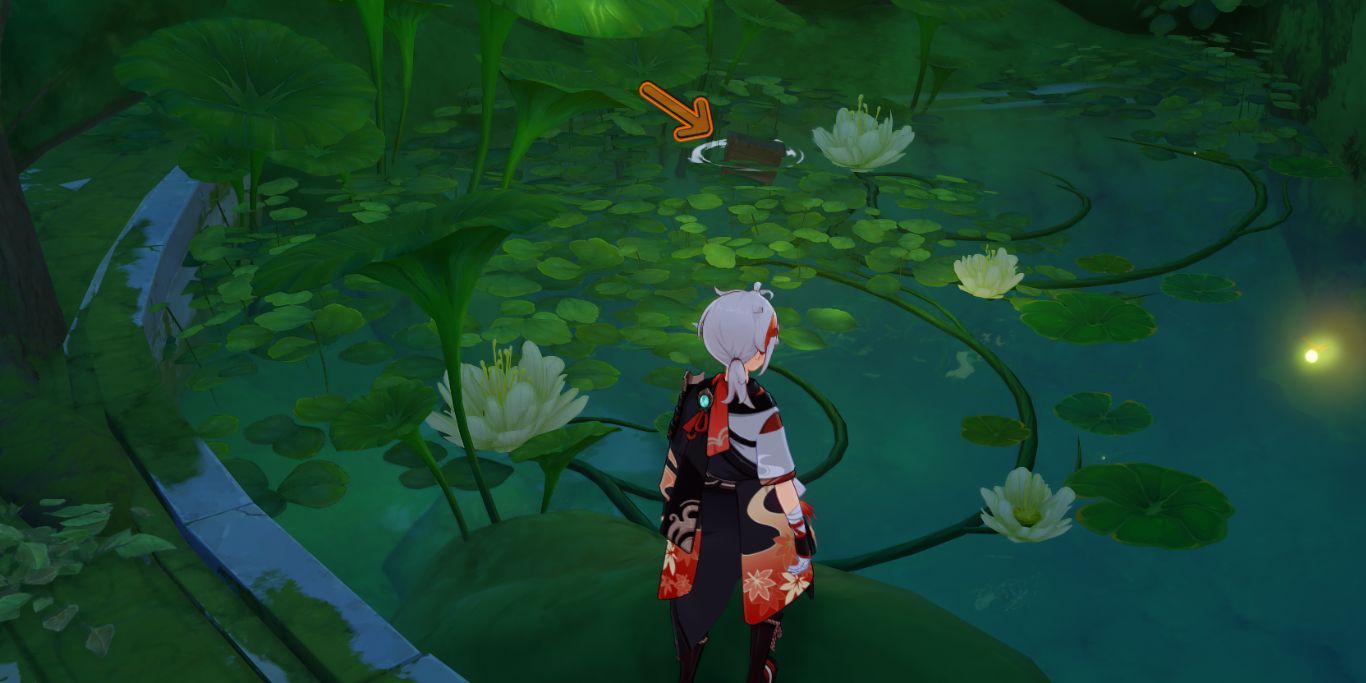 In this pond, you'll see the blooming flowers mentioned in the riddle. You'll also be able to find another small brown box in the upper corner of this pond, giving you the final riddle, which isn't really a riddle. 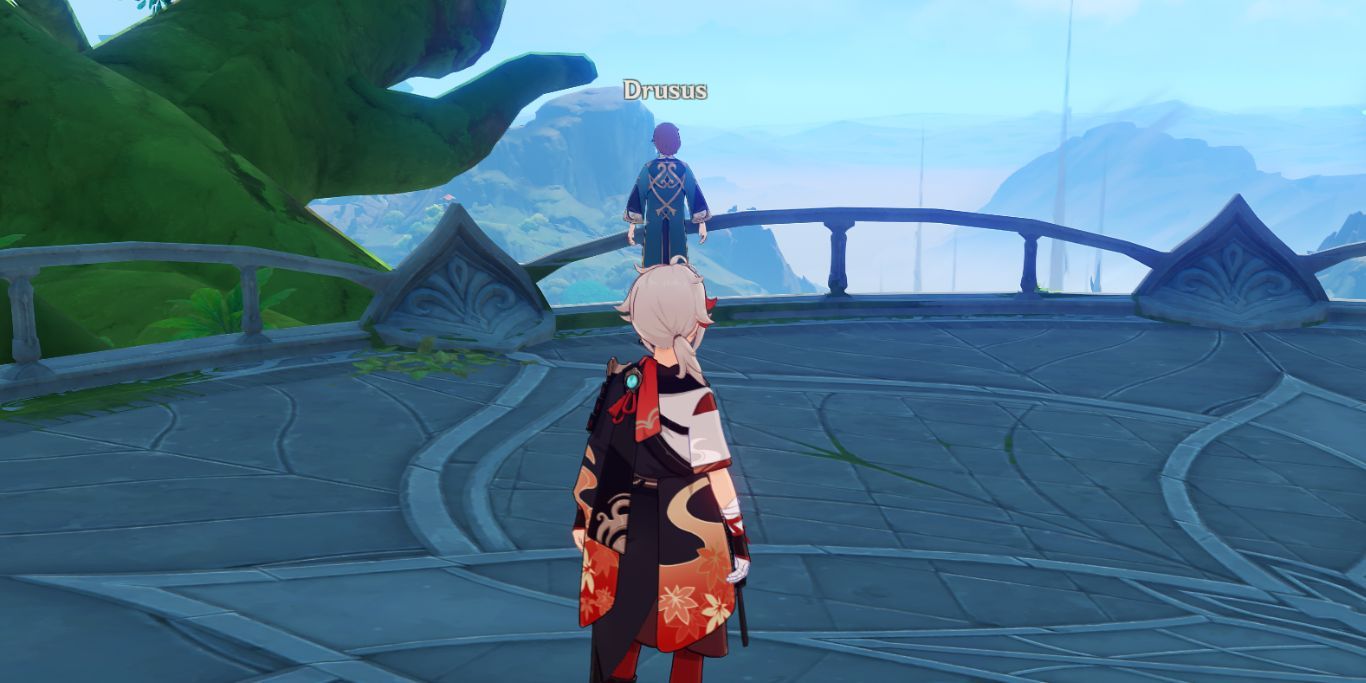 The only riddle part in this one is the "temple of knowledge". This is because you'd normally think that the solution has to be near the Akademiya, which isn't true. To find the creator of these puzzles, you need to head to the front of the Sanctuary of Surasthana.

To do this, teleport back to the Waypoint near the Sanctuary, and you'll spawn facing the path upwards. Keep following this path until you reach a flat circular surface. Once you're there, go to the main menu and skip the time until 12:00.

Once that is done, a character named Drusus will spawn near the edge of this circle. You can talk to him to get the rewards that are going to be disappointing. At the end of this dialogue, you'll unlock an achievement called "I've Got It, I've Got It!" that will give you five Primogems.

You can find this achievement in the Wonders of the World tab and claim your prize.