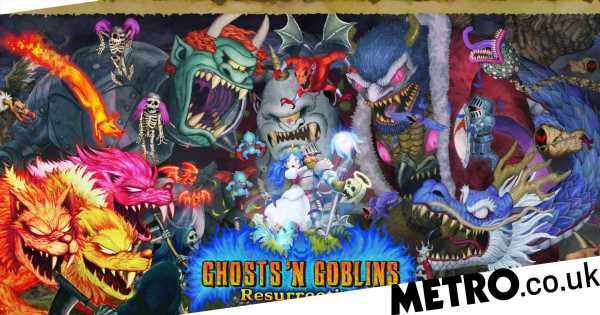 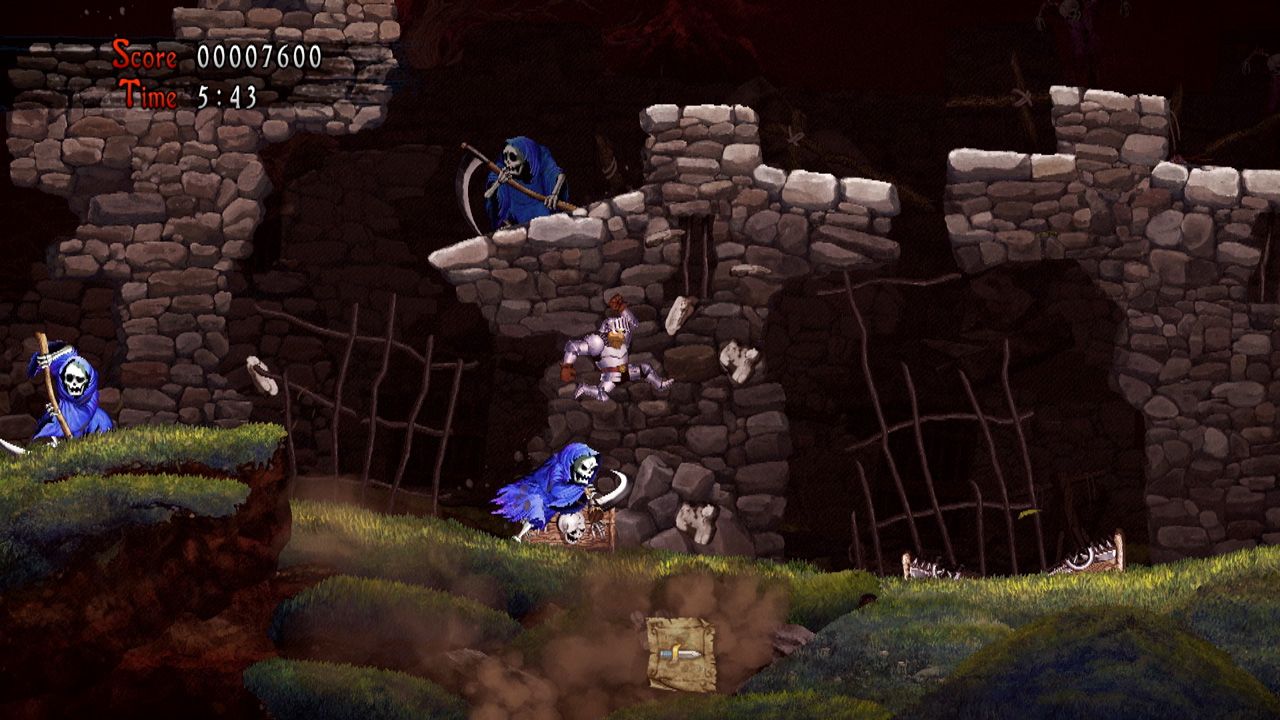 Ghosts’ N Goblins is a franchise we pretend to ourselves that we like. We have very fond childhood memories of the series, both in arcades and the home conversions, and we love the design of the characters and the mix of platform and shoot ‘em-up action. The soundtracks for the original, and especially sequel Ghouls ‘N Ghosts, are glorious, to the point where it’s impossible not to hum along the moment you hear it. But these memories are deceptive, as rather than bringing joy all Ghosts ‘N Goblins has ever brought to the world is frustration and despair.

The original Ghosts ’N Goblins was released in 1985, at a time when all video games were needlessly difficult – especially coin-ops that would rather you drop in another 10p than get to the next level. Many franchises from the same era are still around today but they’ve adapted to the times and altered their approach to difficulty and challenge so that they can be appreciated by everyone. For some reason though Capcom has decided that Ghosts ’N Goblins must always remain teeth-grindingly difficult – which explains why there’s been so few new entries over the years.

Ghosts ‘N Goblins Resurrection is the first proper new game since Ultimate Ghosts ‘N Goblins on the PSP but, alas, this is just a remake. Not a 1:1 remake of either title but close enough that you can always predict what’s coming up next. Well, to be honest, you can do that whether you’ve played the originals or not because what’s coming up next is death. Enough death to leave you broken, as they say in Dark Souls 3.

Resurrection includes remakes, or reinterpretations – something beginning with ‘r’ anyway, of both games, allowing you to switch between either when you get to the end of a level. That means you could technically play it as a reincarnation of just one of the games alone, although most players are more likely to skip between them depending on which level is easiest/has the best soundtrack.

If you’re unfamiliar with the original games they were, like many Capcom titles, unusually involved for a coin-op and while technically they were platform games the platforming was rarely the difficult part, even though protagonist Arthur has a really awkward jump with a frustratingly wide arc. To defend yourself, you had a wide range of collectable weapons, including lances and flaming torches, that could be hurled at enemies at a rapid enough rate to count as a 2D shooter.

It was similar in concept to the original Castlevania, before it gained role-playing elements, but came out a year before Castlevania even existed. Even the setting was similar, although portrayed in a more light-hearted manner. Turning the modern games into Metroidvanias, or at least adding some kind of role-playing or narrative element, seems an obvious way to go but only Ultimate came anywhere close to that, and even then all it added was a few more items and less linear level structure.

Resurrection does even less than that, merely adding some unlockable abilities that are obtained by collecting fairy-like creatures, that remain invisible until you’re right on top of them. None of the abilities are terribly interesting though, and largely consist of a few different magic attacks that either act like a smart bomb or transform ordinary enemies into frogs or statutes. The most expensive ability merely restores your armour, if you lose it, to give an example of just how unexciting some of the unlocks are.

Nothing substantial has changed about the weapons either and the jump is still as frustrating as ever. There are several difficulty levels but even the second lowest is still extremely hard, even by the standards of the original. The lowest difficulty does make you immortal but even then you’ve still got to navigate the levels, which is easier said than done whatever setting you’re on.

In terms of visuals, the game uses an odd storybook style that despite some occasionally nice animation, particularly the scythe-wielding skeletons, often looks stiff and cheap. The art design looks very Westernised, like some long lost BBC children’s programme, but the game has been developed internally at Capcom, which is disappointing for a developer so renowned for their artwork.

Why they’d want to change the iconic art style but not anything else is a mystery, but the game does manage to justify itself in one way, via an unexpectedly imaginative two-player co-op mode. Rather than just having them play as another knight, the second player gets to control a ghost who can take multiple forms, including one who can generate a protective bubble to cover Arthur and another that can create short-lived platforms for him to jump on.

The ghost can also attack enemies and is by far the most interesting part of the whole game, but of course you’d never even know it was there if you were playing on your own – which also means the game is considerably harder when you’re going solo.

Frankly, we had a lot more fun playing the original two arcade games in the Capcom Arcade Stadium (where Ghosts ‘N Goblins is currently a free download), thanks to its rewind and slow-mo options. There is an option in Resurrection to slow the game speed down too, hidden away in the menus, but the effect is only mild and doesn’t really help much, especially with jumping.

We’d love for Ghosts ‘N Goblins to become a major franchise again but Resurrection doesn’t seem likely to facilitate that. The series has got to break its obsession with extreme difficulty for that to occur but given even the Maximo spin-offs were stupidly hard that doesn’t seem likely to happen. Not even Dark Souls is this frustrating and unfair, and while Ghosts ‘N Goblins does have the excuse of age its legacy is becoming harder to appreciate the more it refuses to change.

In Short: A needlessly stringent remake of the original two arcade classics that is just as frustratingly difficult as ever, although it does have a neat co-op mode.

Pros: The world of Ghosts ‘N Goblins is always a fun one to explore, with clever level design and weapon variety. Co-op mode is surprisingly adventurous – and useful. Great soundtrack.

Cons: There’s just no need for the game to be this difficult, as it saps all the fun out of the experience. Few new ideas and a boring skill tree. Cheap-looking new art style doesn’t really work.