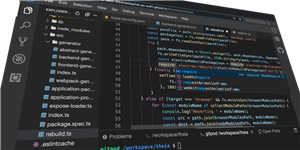 Gitpod, a cloud-based open source development environment, today revealed it has raised $13 million in a round of funding. The German startup also introduced a handful of new features, including native support for Microsoft’s Visual Studio Code editor.

The raise comes amid a boom in activity in the browser-based coding sphere, as developers move away from local development environments to the collaboration-friendly cloud — particularly important in a world that has rapidly transitioned to remote work. Moreover, local development can cause problems when it comes to testing performance and security because not everyone has the same technological setup as the developer. Moving to the cloud helps circumvent many of these problems.

“Developers are automating the world, yet they waste a lot of precious energy manually setting up and maintaining development environments,” Gitpod CEO Sven Efftinge told VentureBeat. “Millions of developers are slowed down on a daily basis with tedious tasks to get into a productive state while also facing annoying ‘works-on-my-machine’ problems. Our purpose is to remove all friction from the developer experience. This makes everyone always ready to code and software engineering more collaborative, joyful, and secure.”

From Gitpod’s perspective, the ethos basically means that it “listens” to changes within a git repository and prebuilds the source code whenever someone pushes a change to it — these prebuilds, according to Efftinge, are “key to preparing dev environments that are truly ready to code.”

“We invented prebuilds so application code, configuration, and infrastructure can all be stored as machine-executable code in your git repositories and applied to dev environments automatically and continuously,” he said. “We are preparing your whole dev environment even before you start. Only then, you are always ready to code with a single click.”

Gitpod works with all the main git platforms, including GitHub, GitLab, and Bitbucket, allowing developers to spin up a server-side (i.e. not local) development environment from any repository in just a few seconds. This includes the IDE (integrated development environment) and all the related tools and dependencies needed to run the project, including compilers, interpreters, runtimes, build tools, databases, and application servers.

Above: Running Gitpod directly from a GitLab repository

Cloud-based coding environments aren’t exactly new, with the likes of Codenvy — which was acquired by Red Hat four years ago — built on the Eclipse Che open source cloud IDE.

More recently, we’ve seen a slew of cloud-based developer tools, including GitHub’s Codespaces, which launched in early access last year and is similar to Gitpod in many ways. Then there’s CodeSandbox, which raised $12.7 million in October to help developers create a web app development sandbox in the browser; Replit, a browser-based IDE built for cross-platform collaborative coding that raised $20 million in February; and CoScreen, which exited stealth last month with $4.6 million in funding to bring multi-user screen sharing and editing to remote engineering teams.

Not all of these are exactly the same proposition as Gitpod, but they demonstrate that development environments are shifting away from “local.”

Gitpod’s decision last August to release its platform under an open source AGPL license was a big move for the company, one that afforded developers more freedom to deploy Gitpod however they want, whether through a SaaS subscription managed and hosted by Gitpod or self-hosted on Kubernetes, Amazon’s AWS, or Google Cloud Platform. And a native integration with GitLab announced late last year will only serve to deepen its appeal.

But Gitpod’s big pitch is that it’s not purely focused on IDE — it’s about automating developer environments in the cloud. The company is currently piloting a feature that allows users to benefit from Gitpod while working with third-party IDEs such as GoLand or IntelliJ and connect to Gitpod containers from their local environment.

“We built Gitpod in a way that its architecture is scalable and it can work with other IDEs as well,” Efftinge said. “The feature is currently still in beta, but [it’s] important to understand our future direction.”

It’s worth noting that Gitpod’s target market is developers, so embracing open source makes a great deal of sense. Developers, after all, play a big part in driving companies’ software buying decisions.

“Making it open source builds trust and allows users to become contributors as well, or at least take part in the development process,” Efftinge said. “From a business perspective, buying power in companies shifts toward the individual engineer — for Gitpod to be successful, we have to win the hearts and minds of developers.”

Founded out of Germany in 2019, Gitpod had previously raised $3 million in funding. Its latest $13 million cash injection was spearheaded by General Catalyst, with participation from Speedinvest, Crane Venture Partners, and Vertex Ventures. Gitpod claims some 350,000 users, including developers from major businesses such as Google, Amazon, Facebook, Uber, Intel, and GitLab, though, Gitpod didn’t confirm whether the companies are paying customers or not.

“What we can say is that all of those companies have projects where they use Gitpod to streamline their development workflows for either their own developers or for external contributors,” Efftinge said.

Alongside its funding, Gitpod also announced today that it now supports Docker and sudo privileges (a Linux program to give temporary root privileges to specific users), which means developers can now run Docker in their workspaces. And Microsoft’s Visual Studio Code will now also work in Gitpod natively. “You get exactly the same editing experience that you would get if you have VS Code installed locally,” Efftinge said.