Forget about GTA 6, because Rockstar doesn't appear to be slowing down when it comes to new GTA 5 content.

Earlier this week Rockstar Games released yet another massive new update to GTA Online, introducing the Diamond Casino Heist DLC to the game.

As you might suspect, this means a wide variety of new cars, clothes, collectables and missions to undertake. Not to mention a brand new heist as the DLC's centrepiece.

As players also know, each DLC features a collection of new secret missions to undertake.

For instance, in the Diamond Casino & Resort DLC, players were first tasked with finding hidden playing cards and then Action Figure collectables before finally, they added Peyote Plants.

With the introduction of this weeks new Diamond Casino Heist DLC, players have two new secret missions. The first involves tracking down 50 Signal Jammers across the city.

The other secret mission, which we'll focus on for this page, involves finding the Los Santos Slasher.

Keep reading we'll explain how to find the killer and why you should want to track down the slasher.

There is no 'start' per se with the Los Santos Slasher mission. You just need to find a total of five clues across Los Santos.

Four clues are in fixed locations and once you’ve collected the four you need to find the fifth and final clue which is a murder van that can be found at different locations around the city.

Clue 1 – “Can You Find Me?” writing on the wall in Great Chaparral.

Clue 2 – A severed hand near the runway in Great Senora Desert.

Clue 3 – A Machete stuck in a barn in Grapseed.

Clue 4 – A bloody handprint on the door of Bayview Lodge in Paleto Bay.

These four Los Santos Slasher clues can be found on the map below (credit to Twitter user @TGFGuru).

Upon finding the four clues above you'll need to track down the Los Santos Slasher's murder van.

The van can spawn in five possible locations around the city, so it's not guaranteed to be in the same location for every player.

You'll find the five possible locations you could find the murder van on the map below:

After location the van you'll be sent a text from an unknown number that reads:

"I'm sick of you sticking your nose in whee it doesn't belong! Now I'm not going to lie… what happens next… won't be nice for you."

This is from the Los Santos Slasher and he will now spawn and ambush you repeatedly in an attempt to kill you unless you stop him.

If he does kill you, he will continue to ambush you, so really you need to stop him.

It's also worth knowing he will only spawn on your location in Blaine County at night between the hours of 7pm and 5am.

Killing the slasher will grant players with the new Navy Revolver, as well as XP and $50000.

There's one final step in this secret mission that players can undertake.

And if the map above guide doesn't help, maybe the video below from GTA Series Videos might? 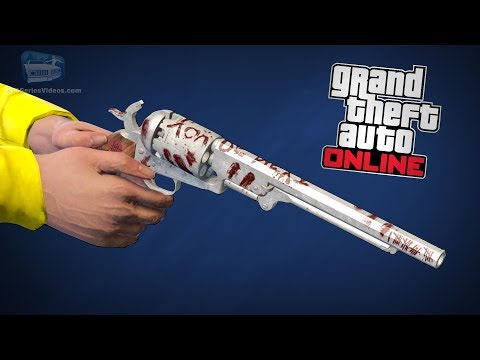 Free Xbox One Games Are Available To Play This Weekend