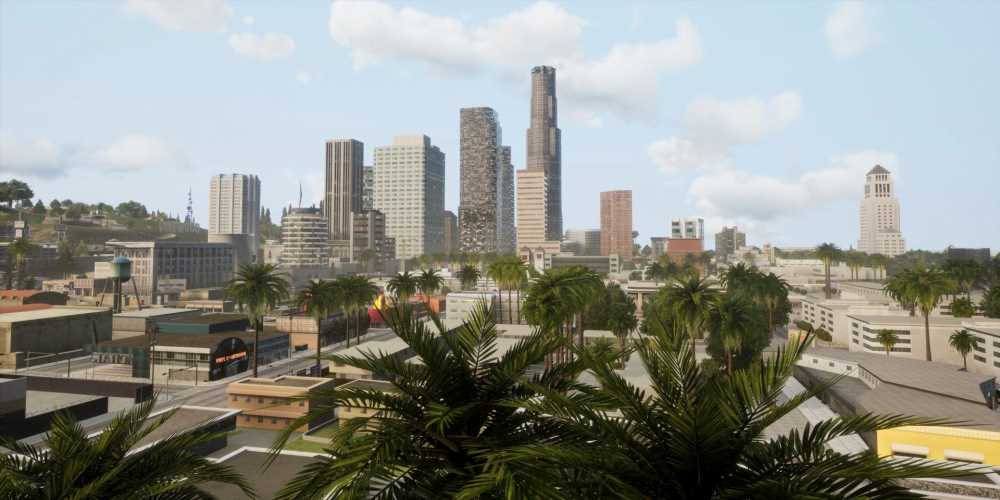 To say Grand Theft Auto: The Trilogy – The Definitive Edition launched in a less than stellar state would probably be an understatement. The bugs and glitches upon arrival were extensive, and the unintended presence of some files in the PC version saw it delisted and unplayable on the platform for three days. The problems were so bad that Rockstar issued a public apology and has pledged to improve the game as quickly as possible.

The first update fixed more than 60 issues, and today's rectifies over 100 more. One of the issues addressed was the lack of fog to be found in the remastered version of San Andreas. That might seem like a trivial omission on paper. However, as you can see in the photos below, without the fog effect from the original game, the entirety of San Andreas can be seen from the sky making the map seem much smaller than it really is.

Modders have been hard at work fixing The Trilogy's issues on PC, and now there's an official fix for the fog across all platforms courtesy of Rockstar's latest update. You can now find a toggle in the San Andreas menu labeled “Ground Haze”. It is switched off by default, but if you turn it on the islands will once again be covered in a pleasing layer of cloudy fog, making San Andreas look more like a sprawling region and less like a model village.

While it does the same job, the ground haze effect now available in The Trilogy's San Andreas is very different from the one that made the original feel so much bigger. While switching ground haze on literally covers the islands in a layer of clouds, in the original game on PS2 it was used to obscure objects in the distance. The different effects used still make the two versions of the game look very different, but that's the whole point of a remaster providing the newer game looks better, which it arguably does now the fog has returned.

As touched upon above, the update, which is now available across all platforms, is an extensive one. Aside from the ground haze toggle, the fixes include correcting misspelled words on signage across all three remasters and stopping rain from falling indoors during certain cutscenes. The rain has been a major issue for The Trilogy so far with so many players labeling the game unplayable during heavy rain.