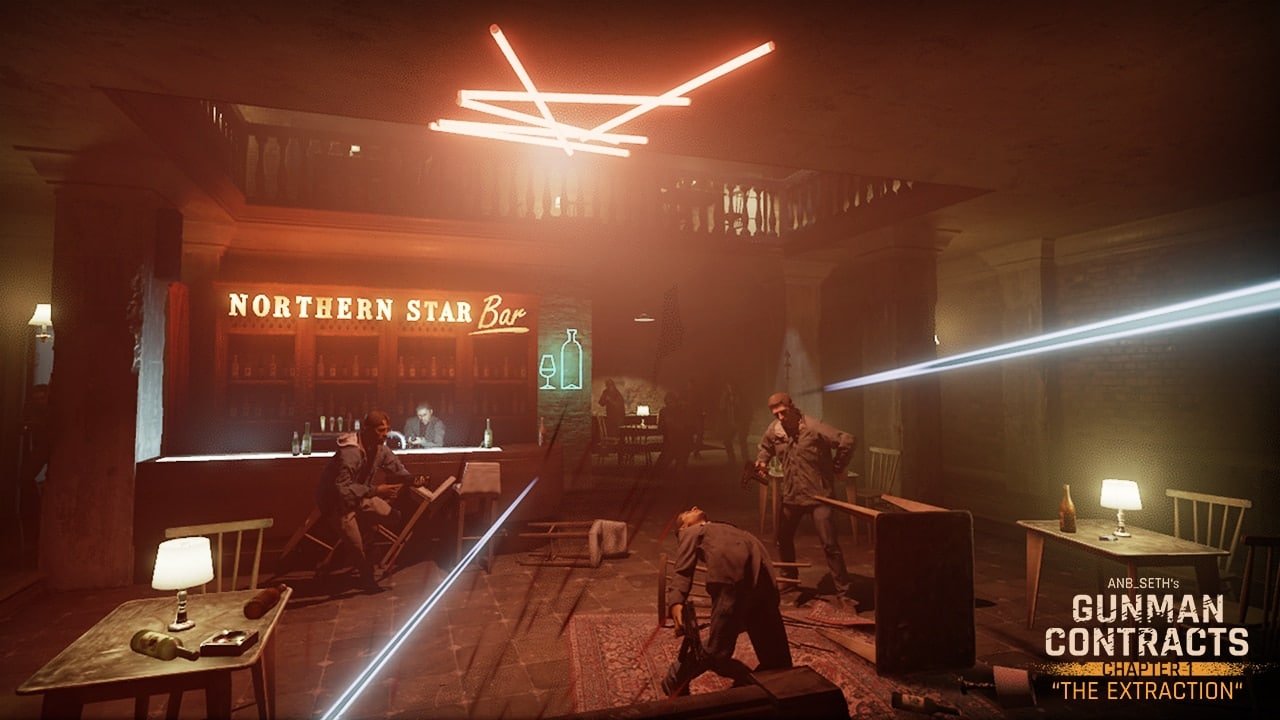 Gunman Contracts, a new Half-Life: Alyx mod by ANB_Seth, overhauls Alyx’s visuals to turn it into a mobster shooter that is almost unrecognizable from the game it started as.

We’ve tried out a bunch of Alyx mods and custom maps over the last year, most of which aim to create an experience and setting similar to the game’s main campaign. However, a select few have pushed the boundary further by replacing assets or creating a level set outside the world of Half-Life, such as the Bioshock, Goldeneye and Wolfenstein 3D mods. Those mods were riffing off other existing IPs, but Gunman Contracts uses Alyx’s engine and gameplay to essentially create a small map that’s entirely new in setting and story, disconnected from Alyx in all but the basic gameplay.

Chapter 1 – The Extraction released this week and is the first part of what will hopefully develop into a series. You play as a hired gun sent to rescue a woman in a nearby bar. In terms of gameplay, it’s similar to Alyx with some elements stripped back. The pistol is your only weapon, the multi-tool is nowhere to be seen and niether are the gravity gloves. It’s Alyx gameplay, but in its rawest, pure shooter form.

You can check out the first five minutes of gameplay here:

The most impressive and notable part of Gunman Contracts is how fresh and different it feels. Some of the default assets and sounds have been replaced, providing just enough fresh assets to feel different while still using the stock Alyx materials to make the buildings and the larger environments. If you had never played Alyx before, you might not even know you were playing a mod of an existing. It feels surprisingly different, even if the replaced assets are realistically only a small portion of what’s being used.

The biggest change is to enemies, which now appear as 1920s mobster types instead of Combine soldiers. It’s an impressive switch out visually, but it does come with drawbacks. Their lips don’t move at all, but the enemies do have a very limited set of voice lines (taken from Max Payne 2, according to the Steam Workshop description). Likewise, the AI and movement of the mobsters is significantly (yet understandably, given the scope) worse than the Combine solider you’re used to fighting in Alyx. They mostly stand still and motionless, interspersed with moments of shooting or movement between two places, sometimes even popping up with no warning behind you.

This can make encounters feel a bit frustrating and cheap at times, but the predictable nature of it also gives it a retro shooter feel — once you learn where the enemies are, you can almost speed run your way through. Even if the combat AI isn’t as dynamic or polished as Alyx, it’s still fun to play and the novelty of the visual change makes it worthwhile.

The mod is super impressive overall and should be congratulated for trying out something different and more challenging than just a standard Alyx map set in City 17. What’s most striking here is the visual overhaul and thematic change — even if there are a few AI and gameplay downgrades, the familiarity of the gunplay and Alyx’s mechanics help you brush over them.

Gunmade Contracts – Chapter is available now on the Steam Workshop.