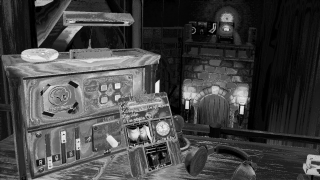 At first it all feels just a little too familiar.

Slinking back into the agent’s armchair and reacquainting yourself with I Expect You To Die’s brand of arms-reach VR feels less comforting, more concerning. The virtual tether to push and pull objects from afar doesn’t have the instant gratification of Half-Life: Alyx’s gravity gloves, and visually everything’s practically identical to the 2016 original. Doesn’t this feel a little, I dunno, dated?

But, in true form, Schell Games soon shuts me up. The Steam Next Fest demo offers just a slice of one of the game’s puzzles but proves the team’s knack for inventive puzzle design hasn’t gone AWOL.

It casts you as a stage hand at a live performance, operating lights and curtains. As usual, there’s a breadcrumb trail to follow; items with seemingly no immediate use are hidden away in draws and there are various buttons to poke and prod. I worry that I’ll be hitting a roadbump almost straight away with so many options at my fingertips but it doesn’t take me long to match a keyhole to a key I’ve uncovered.

From there, reassuringly, things just start to flow. Dots are connected: “Oh, so that button lifts that and this lever lowers this“. Are you’re away. Just like the first time around, the game’s focused on interactions that feel fun and intuitive in VR. Simple stuff like pulling levers to throwaway easter eggs like attaching a fake moustache to your face; all of that is still here.

In fact, the demo ends just as things are about to get interesting; the lever for one of the pulleys snaps and you have to hold the curtains in place with one hand whilst operating the machinery with the other. It promises a brilliant bit of VR multitasking and suggests Schell is once again thinking outside the box for its latest adventure.

It’s probably a good thing that there isn’t much more to say, because these games aren’t especially along if you know what to do and it’d be a shame to shave off anymore from the ‘full’ experience when it arrives this August. I Expect You To Die is all about surprises, so let’s keep it that way.

For now my one ‘complaint’, if there’s one to be had, is that this all feels distinctly like a continuation of the first game’s additional levels than it does a properly evolved sequel. Schell did more than right by fans with extensive extra (and free) content for the first game and it’s definitely the right time for a follow-up, but I’m yet to see anything that really goes beyond what the original offered.

I Expect You To Die 2: The Spy And The Liar launches in August on Oculus Quest, PSVR and PC VR headsets.