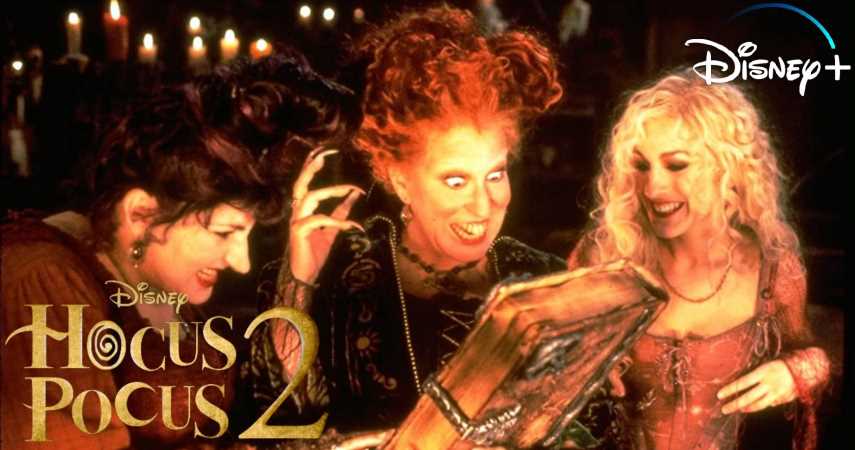 Double, double toil and trouble, fire burn and cauldron bubble! Disney has confirmed that Hocus Pocus 2 will be streaming on Disney+ fall 2022, with Bette Midler, Sarah Jessica Parker and Kathy Najimy reprising their iconic roles as the Sanderson Sisters.

Disney rounded up the screen-captured captions from the original actresses’ Instagram posts confirming their reprisal of the wicked, child-hungry witches of Salem and assembled them onto the official Hocus Pocus 2 poster.

Adam Shankman was set to direct the sequel to the 1993 cult classic, but due to scheduling conflicts, Anne Fletcher, whose credits include the Ryan Reynolds/Sandra Bullock rom-com The Proposal, will be taking over the camera while Shankman will serve as producer.

“Now more than ever, people need to laugh,” she said in a press release from Disney. “We should be laughing every day, and there is so much fun to be had with these three unbelievable women playing delicious characters from such a beloved film. I am so grateful to be able to play a part in bringing these witches back to life, and to be working with my friends at Disney again to make it all the more special. This is a movie for everyone, from the fans who grew up with the first film to the next generation of viewers, and I can’t wait to get started.”

In the original Hocus Pocus, a teenage boy inadvertently resurrects the Sanderson Sisters into 1990s Salem by lighting the Black Flame Candle after they were hanged for witchcraft in 1693, and they’re shocked to learn that Halloween has been turned into a costume-wearing, candy-eating holiday. The synopsis for Hocus Pocus 2 is a little similar, but according to Disney it involves three young women who summon the witches once more to the 21st century, and they have to conjure up a way to stop them from wreaking havoc with their new magic tricks.

Although the original trio of witches will return to the sequel, Disney didn’t confirm any other casting or whether other members of the original cast will reprise their roles. However, Thora Birch, who played Danni Dennison opposite Omri Katz as her brother in Hocus Pocus teased on Twitter last week that she might have some involvement in Hocus Pocus 2 with a GIF featuring Midler’s character Winifred and her catchphrase.

While the first Hocus Pocus didn’t do such a magical job with critics, it nevertheless achieved cult status with its home video sales and repeated television broadcasts on Disney Channel and Freeform’s 13 Nights of Halloween every October. It became so popular among fans, Walt Disney World introduced the Hocus Pocus Villain Spectacular in 2015, and Salem saw a huge surge of tourists around the movie’s 25th anniversary three years later.