Remedy Entertainment has garnered a reputation for engaging storytelling through guided, linear experiences thanks to standout titles like Max Payne, Alan Wake, and Quantum Break. However, Control looks to smash preconceived notions about the projects the studio works on by delivering a more open-ended experience. One way Remedy is hammering home this idea of encouraged exploration is through optional side missions that players can choose to engage with or ignore altogether. These missions not only give you new, unique gameplay to explore, but you’re also able to glean more information about Jesse, The Oldest House, the Federal Bureau of Control, and the Hiss.

Control is a game based in the unexpected and unexplainable, so you can expect many mysteries during your journey through The Oldest House. The nonlinear format of the game let Remedy experiment more with side content for those who truly want to learn all they can about the supernatural entities and mysteries of Control’s world.

According to game director Mikael Kasurinen, when developing past games, Remedy has typically looked for an exciting 30-second loop of action, then attempted to recreate that experience throughout the entire game. The team is taking a vastly different approach with Control.

“Here, we have shifted our goal, so we want to go for more complex scenarios, more different abilities, and you choose the way that you want to fight,” he says. “It means that the combination of what abilities you have, how you have upgraded them, and what weapon mods and character mods you have actually affects the way you should fight your way through the scenarios.”

I watched a developer play through a side mission in its entirety. A desperate man named Phillip begs Jesse for help as she passes by. In the room with Phillip is what appears to be a retro-style refrigerator. As with most things in Control, this fridge is more than meets the eye as it’s a dangerous Altered Item. This item requires someone to keep eyes on it in order to appease it. Phillip explains that he can’t look away from a refrigerator or something really bad will happen. The Federal Bureau of Control set up shifts with its employees to watch the fridge, but in the chaos of the Hiss invasion, poor Phillip has been forgotten. You can choose to give Phillip a hand or leave him to meet whatever horrible fate awaits him.

As with most games’ side missions, this content adds lore and meaning to the events of Control, but they aren’t necessary to complete the main storyline. From a narrative perspective, Control’s side missions are geared toward players who want to learn more about the world of Control, while the main storyline is more focused on Jesse’s personal arc.

One of the most interesting parts about the optional content is seeing how this invasion is affecting different areas of the building and its many employees. “The side missions are some of my favorite because they color the world in a different way because you actually get to see some of that,” narrative lead Brooke Maggs says. “They fold into the narrative by introducing you more to the NPCs you discover along the way. So when you meet Helen Marshall [in the main story missions], you do later get to do a side mission that’s a personal favor for her, and then you find out more about her role at the Bureau and what she does and how she heads up specialist teams that takes care of a lot of these paranatural events as they happen.”

In addition to gaining context within the story, these optional missions can also grant Jesse new abilities through Objects of Power, giving much more tactile reasons to engage with the side content. “Many of the Objects of Power that are really fundamental and important parts of the game are actually in the side missions,” Kasurinen says. “If the player, for instance, doesn’t get the Shield then what does that mean for combat? It might make certain fights really tough later on because it’s optional. You don’t have to go and get the Shield if you don’t want to.” 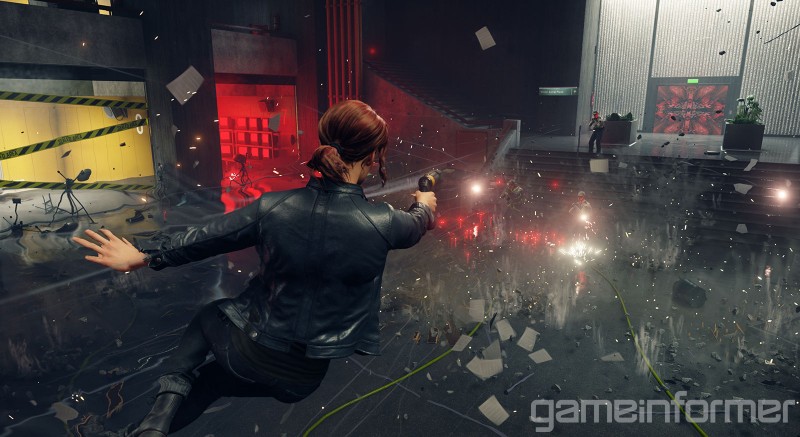 In addition, many of the boss fights are found in the side content. In this playthrough, Jesse decides to not abandon Phillip, and we see all these pieces come together in one strong example. The stranded Bureau employee asks Jesse to go retrieve the panopticon supervisor, Frederick Langston. This side mission lets you learn more about Langston and Phillip, as well as a unique Altered Item. I don’t want to spoil what happens at the end of the side mission, but it culminates in a surprising and massive boss fight unlike anything else I saw in my two days of playing and watching Control.

In addition to these intentionally crafted side missions, Control also features Bureau Alerts, which serve as time-bound world events. A timed event spawns somewhere in the sector Jesse is in and the player receives a notification. If you’re able to race to the location of the alert and complete the event, you’re rewarded with loot.

While Remedy wouldn’t spill any details on additional side missions players can expect, they did mention that another involves a clock. I assume this means the clock will be another Altered Item like the refrigerator, but if I learned anything from my time with Control, it’s to expect the unexpected. I’m looking forward to seeing what other twisted ideas Remedy has come up with when Control launches this summer.

Click the banner below to visit our coverage hub for Control, which will be updated throughout the month with exclusive interviews, features, videos, and more.