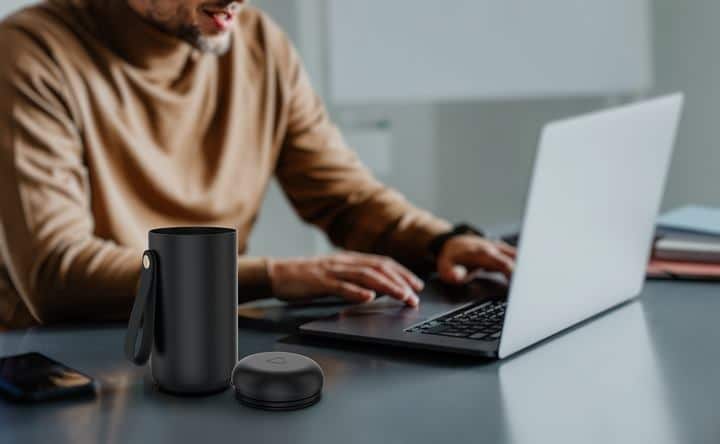 HTC Vive is back at it with the announcement teases. The company is now hinting at a reveal next month in predictably cryptic ways.

The announcement takes place inside the Engage platform at 8am PT on October 14 and anyone can attend on VR platforms or flatscreen devices. HTC accompanied the news with an image (below) of… well we can’t quite tell what. It looks like a flask or Bluetooth speaker. Some have speculated it could be a case for some kind of foldable headset. There’s a little more to the story, though.

The sign-up page includes the message ‘Go with the Flow’. We’d take bets that the reveal is for something called ‘Vive Flow’, then. Vive China President Alvin Wang Graylin also teased the event will have “big news in a small package“.

Now, fair warning, this next one is a big bit of speculation on our part. Taking a look at the event key art, there are two shapes at the bottom that do look just a little like lenses, or perhaps even the front of the Project Proton concepts HTC revealed at the beginning of last year.

Proton was designed to be a lightweight headset powered either by a phone or onboard compute. Could that fit the message of something big in a small package? Or perhaps the company has something on the AR side to show?

But that’s just speculation. Let’s not get too ahead of ourselves just yet. HTC has already launched two VR headsets this year – the upgraded Vive Pro 2 for PC and the enterprise-focused Vive Focus 3 standalone headset. Though Pro 2 can be picked up by anyone, it’s still an expensive high-end device. Whatever the company announces next month — two weeks before the Facebook Connect conference — it’s likely to follow that high-end trend.

We’ll of course bring you the latest on the Vive announcement as soon as we can.