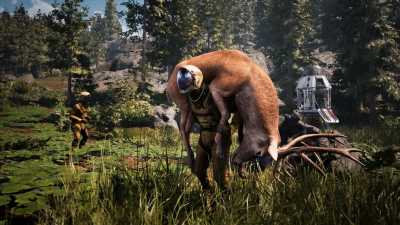 Icarus is a survival game with a twist. Up to eight players drop together from space on an Earth-like planet to mine exotic resources, build settlements, and complete objectives. You’ll also have to contend with local wildlife and the elements themselves. Icarus’ main hook is that it’s session-based. You can only stay on the planet for a limited time (hours, days, or weeks depending on the mission) before you and your crew have to return to orbit, bringing along any valuables you find. Stay too long, and you lose everything for good.

Once you return, you can craft new tech and upgrade your characters to make them stronger and, thus, able to survive longer and tackle bigger challenges during the next drop. This creates a uniquely looping sense of progression. Check out the latest gameplay trailer from the PC Gaming Show below.

Icarus’ standard edition will retail for $29.95. A Deluxe Edition goes for $99.95 and includes the upcoming DLC chapters New Frontier and Dangerous Horizons, both of which will add new biomes, maps, and enemies. There’s no release window on either expansion, which will also be sold separately. The Deluxe Edition also comes with a limited-edition First Cohort envirosuit and two Outposts maps where players can build settlements of 1km x 1km plots of land to share with friends. Pre-ordering both editions nets a 10% discount.

Deal Hall says he and RocketWerkz hoped Icarus could be free-to-play, but has ultimately decided on going the paid route. In a press release, Hall explains the reasoning behind the change, stating:

“We didn’t want the business model to get in the way of the game experience. We also heard loud and clear from our community that they wanted to avoid the pitfalls of free-to-play. We want Icarus to continually evolve as a living game, always adding new session challenges and game modes. We think regular chapters and content updates are a great way to deliver that.”

Be sure to visit our E3 coverage hub to read other big announcements to emerge during the days-long festivities. You can keep track of what digital showcases are still to come in our E3 schedule.