A third of U.S. gamers have experienced anxiety and other stress-induced disorders multiple times in the past year, according to a survey by My.Games, the International Game Developers Association, and the Fair Play Alliance.

The survey of more than 21,000 gamers ages 14 and up in the U.S., Europe, and Eastern Europe showed the impact of the pandemic on the mental health of players — as well as their use of games to distract themselves from the bleak reality.

While the U.S. gamers had the highest anxiety levels in the survey, players in Spain had the lowest, with only about 15% of Spanish gamers saying they had experienced anxiety multiple times in the past year.

The study was held among players of My.Games’ PC titles Revelation, Skyforge, and Warface, as well as through gamers and developers who follow Take This, FPA and IGDA. More than 21,000 players from the U.S., Europe, and CIS countries part

The survey assessed how aware gamers are about mental health, how often they experience mental health issues, and players’ social experiences during the pandemic. Respondents were asked to evaluate their mental health prior to the pandemic, several months into various lockdowns, and presently. The issues of cyberbullying and disruptive behavior in online games were also addressed to compare how these problems were present before and during lockdowns.

Around 42% of gamers in the U.S. said they sought professional mental health help more than once, while 63% said they would seek it if they needed it. 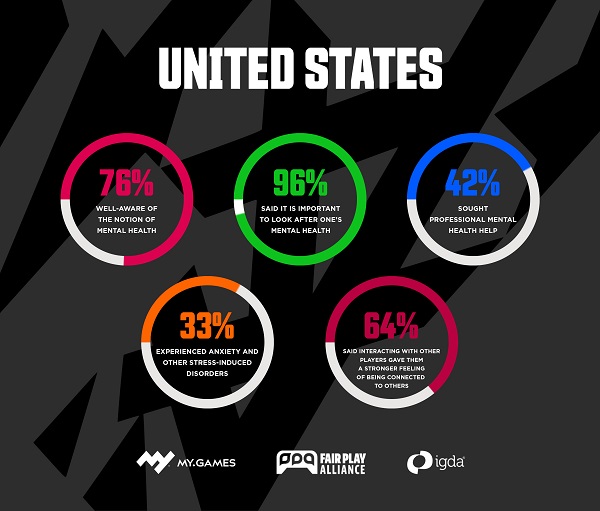 Above: About 33% of gamers in the U.S. said they experienced anxiety in the past year, as well as other stress disorders.

U.S. players noted the cost of services as the most significant obstacle to seeking professional help, while in other countries 8% to 22% singled out this factor. Awareness about the various types of mental health help in the U.S. is very high, with counselors and psychologists receiving the highest number of queries, and online sessions and hotlines being the least popular types of help.

Interacting with other players during the pandemic was mostly met with positive reactions from the respondents as they reported feeling connected, safe, and that it’s OK to make mistakes in games. More than half did, however, note they occasionally encountered aggressive behavior (51%), insults (57%), and trolling (59%). Serious instances of cyberbullying like being humiliated, harassed, threatened, targeted because of one’s identities, and experiencing personalized bullying or social shunning were noted far less often.

“Across the world, we have seen that multiplayer games have helped ease the pains of social isolation for those who enjoy video games,” said Renee Gittins, executive director of the IGDA, in a statement. “Video game developers must make note that toxicity in game communities is still an issue for our industry. Moderation systems, positive culture cultivation, and exclusion of the worst offenders is necessary to allow everyone to enjoy gaming. Management of communities is even more important with the increase in online gaming and its importance in combating social isolation.”

The study showed that, while gamers within the US are aware of mental health resources and issues, they are stopped by the costs.