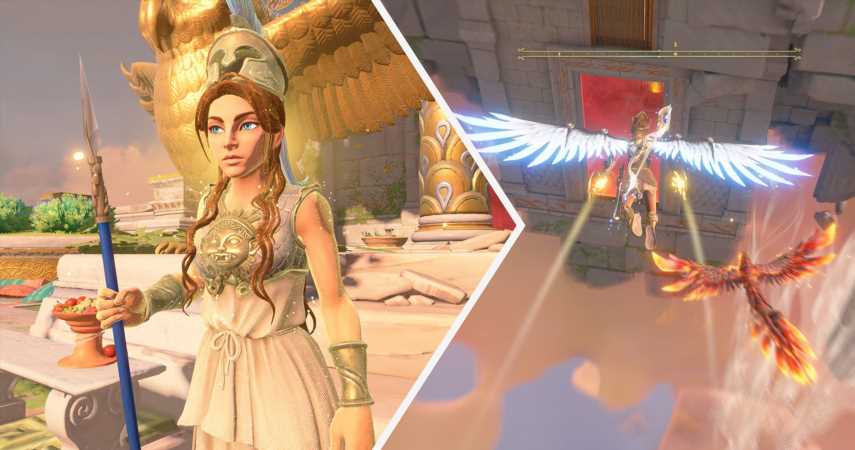 Players will find themselves facing more difficult challenges in the Immortals Fenyx Rising’s new DLC A New God, as the Pantheon tests just how worthy you are of joining them. As part of the A New God story, you will need to complete six vaults for each of the four gods from the main game, and in each vault is an optional chest that holds a relic.

These relics are required to unlock the secret vault, which is the reward for collecting Hermes’s “It belongs in a Museum… er… Pantheon!” side quest where you need to obtain all 24 relics. For those looking for where to find all of the relics in Athena’s vaults and how to solve the puzzles to reach them, we’ve got all the information you need just below. Not all of the vaults are immediately accessible, but Athena will unlock more for you as you progress. 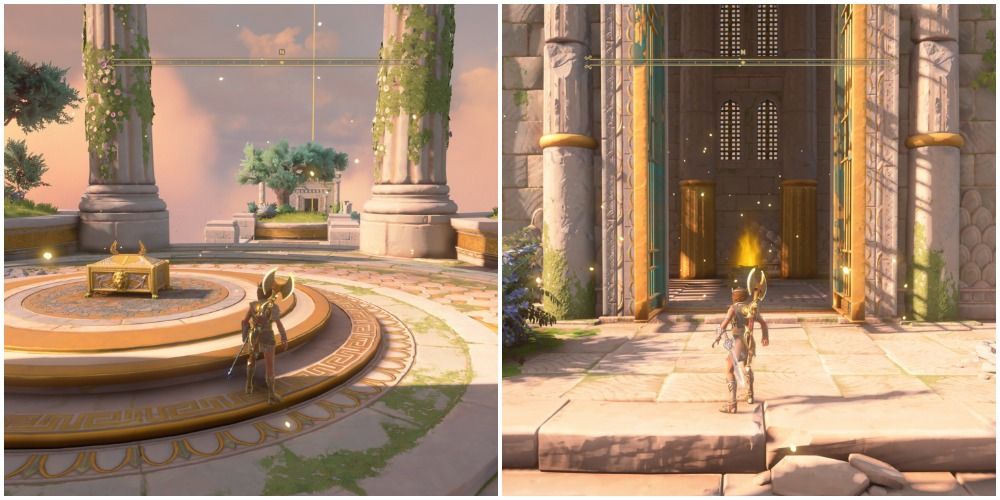 This is a super-easy vault with a super-easy optional chest too. Just continue through the vault until you get to the end chest, but don’t open it. Instead, head behind it and you’ll see the golden pillar that displays the location of the optional chest (though these pillars of light disappear when you get close). There is a puzzle to solve in order to open the gates to the chest, and while the lights will give you the clues, we’ve got the solution for you right here. Simply stand on the buttons in the following order. 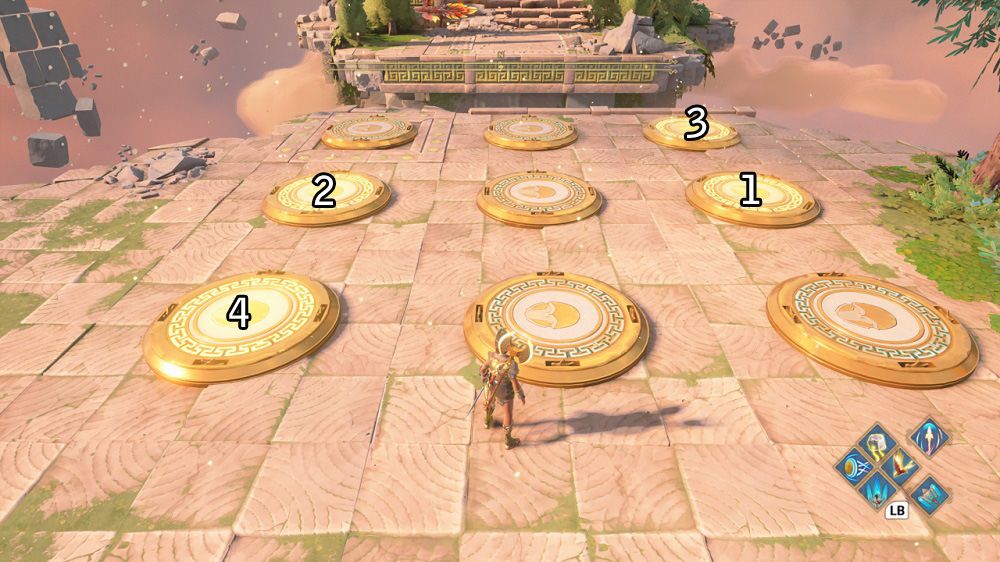 Once you’ve grabbed the Charon’s Coins relic, you can just head back to the end of the level and grab the final chest to be on your way. 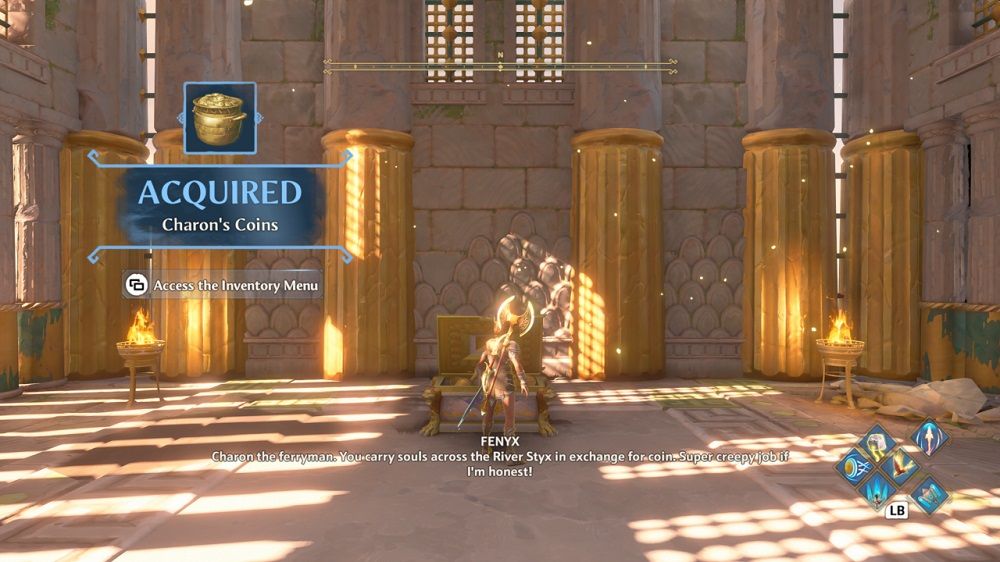 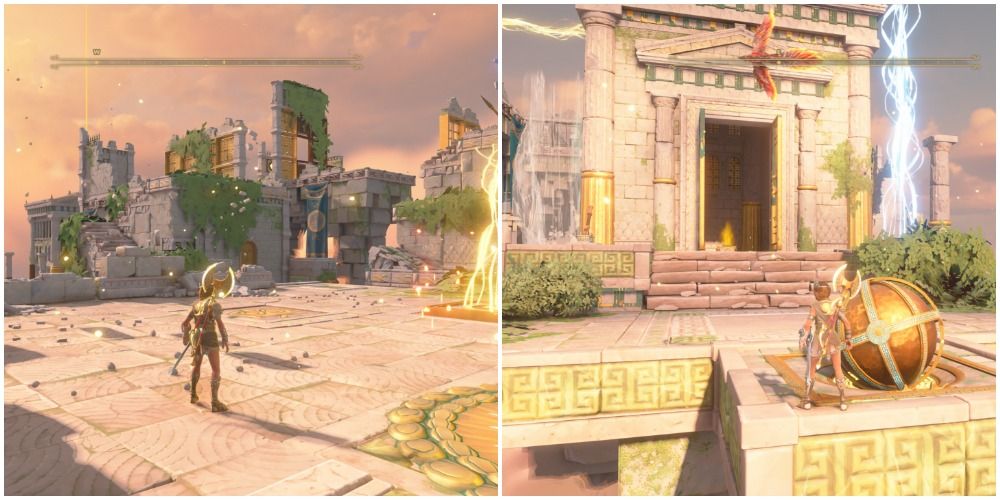 This vault is a little bit trickier in general and it will require you to make the most of your Hephaistos’s Hammer attack to hit various balls around the level, using the normal attack to move them straight ahead, and then the charged attack to help give them some lift upwards. 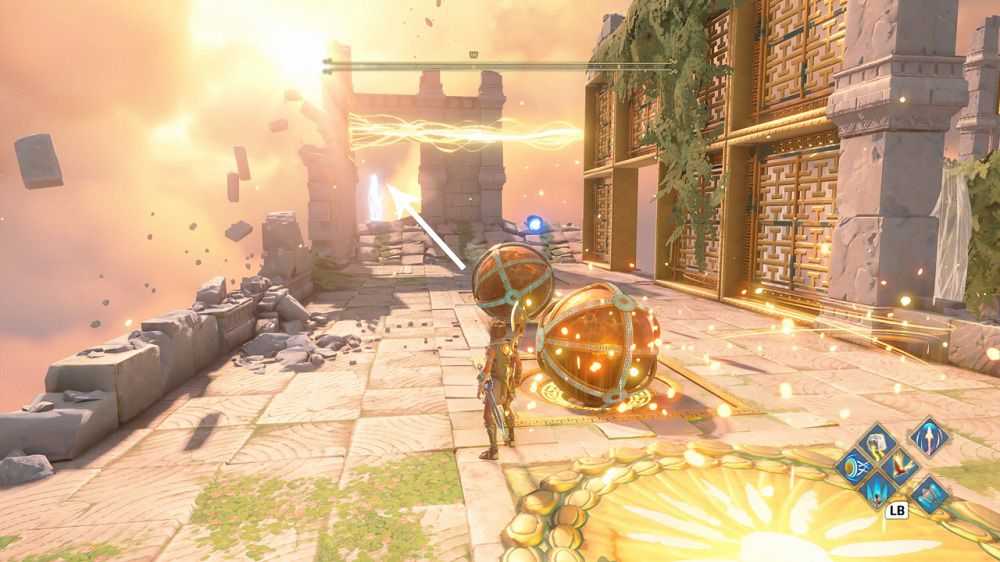 When you reach the part shown above and place the first metallic ball in the recess to spawn the next, this is where you want to take the time to grab the optional chest. You’re going to want to move the newly spawned ball towards the ramp and use a charged hammer attack to make it sail across the air towards the negative charge, as shown above. However, you first need to switch on that negative charge — just head on down to that area and you’ll find a switch in front of the building that is housing the optional chest, as shown below. 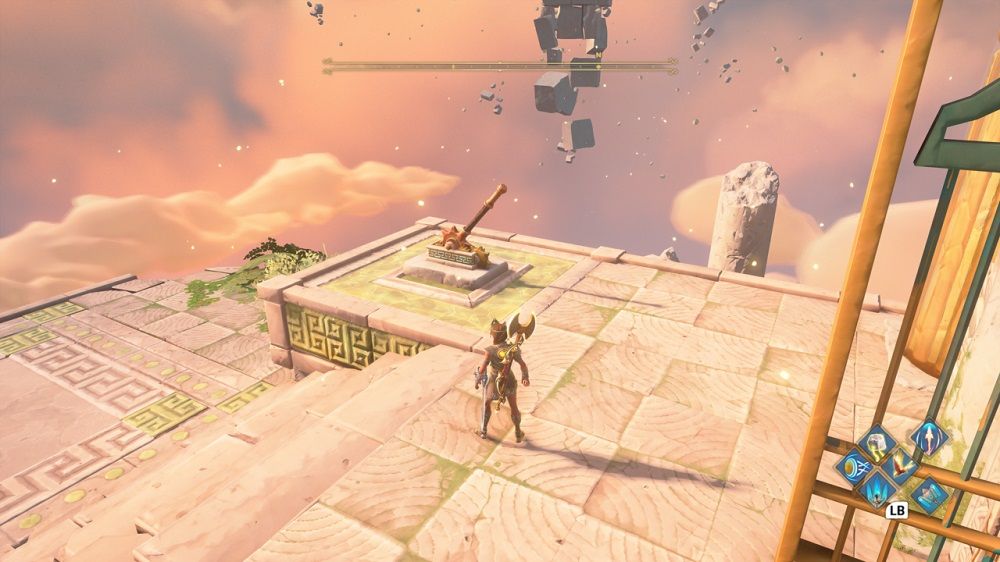 Depending on how good your aim is with your hammer, it might take a few tries to get it right as often the ball will just roll straight off the sloped roof and miss the negative charge. Fortunately, the ball spawns right behind you, so you can easily retry. Once you get it in the negative charge, head over to where it is and drag it out of the charge and into the recess that’s in front of the gates. Grab your Ariadne’s String relic and then continue the level. 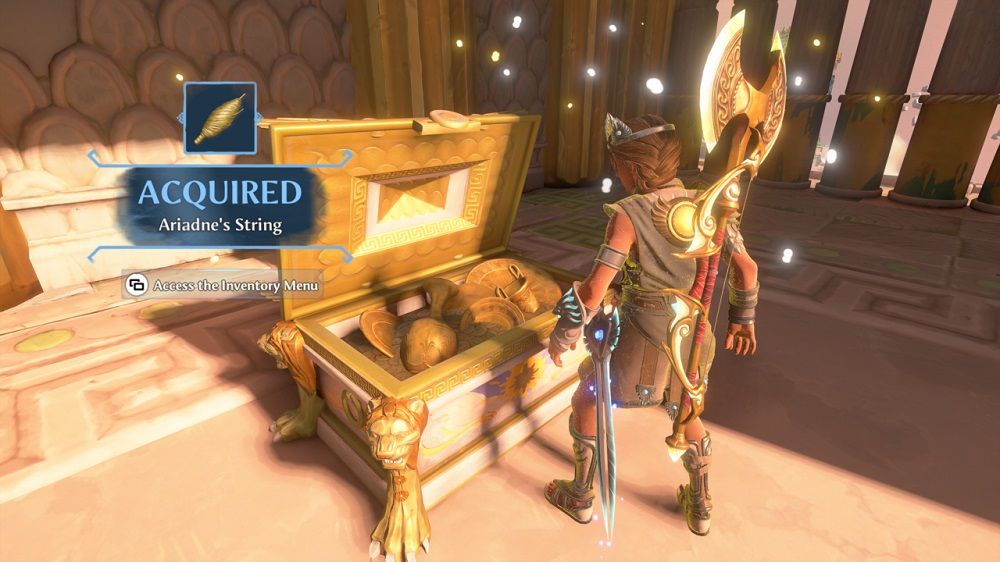 You need to solve a simple electricity puzzle in order to access this vault. Simply carry (while sprinting) the nearby charged block towards the node outside of the gated vault area. Then ensure the block is charged by the new node, and simultaneously hitting the spherical node too in order to open the gate.

This vault is really straight forward and easy, as it’s simple electricity puzzles and two arena battles. You will get to a point where you will see the optional chest off to the left of you, while the vault clearly continues to the right, with there being a checkpoint between the two. It’s right after you use one of the vents to jump forwards. 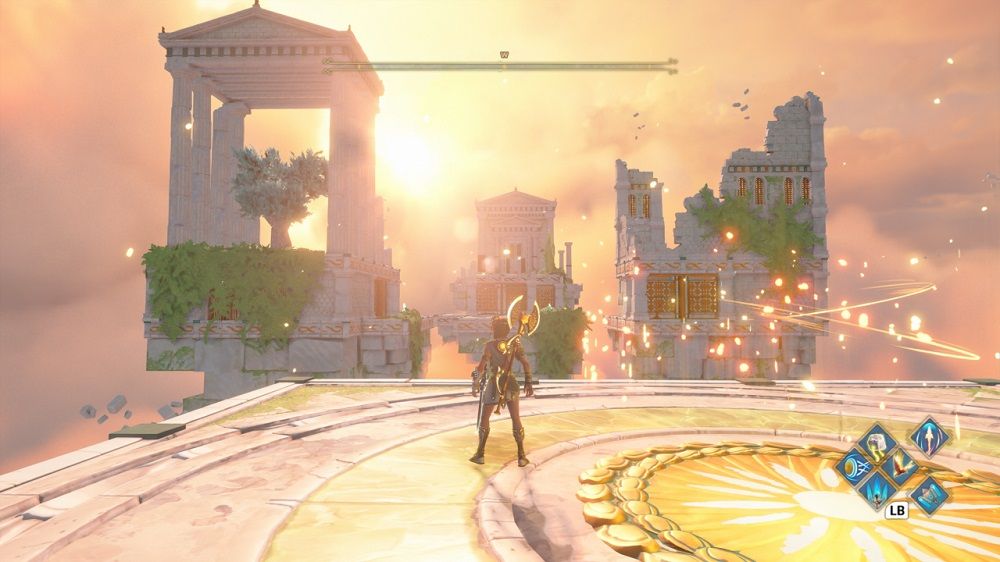 Head to the left and you’ll find yourself faced with a lever and three buildings; one to the left, one in front, and one to the right of you, as shown above. In each of the buildings is an arrow target that you have to hit, but the catch is they are only physically there for a short time after the lever is used. The lever doesn’t give you a lot of time, so if you’re not great at using Apollo’s arrows, it might take you a couple of attempts just to time it right, but it’s pretty straightforward. Just remember to slow down your arrow as necessary.

The crystal in front of each building will light up when you hit the target, but as previously warned, these switch off if the lever resets. Hit all three targets in one pull of the lever in order for the gates guarding the chest to open, which can be found in yet another building behind the one to the north in the image above. Grab Glauko’s Hook and then head back to continue through the vault.

Another straight forward vault with an easy optional chest. You will eventually reach a checkpoint where you can see the optional chest to the left of you, and the way forward into the vault to the right. Fly over to the area where the chest is and you’ll find two linked blocks that you can move. 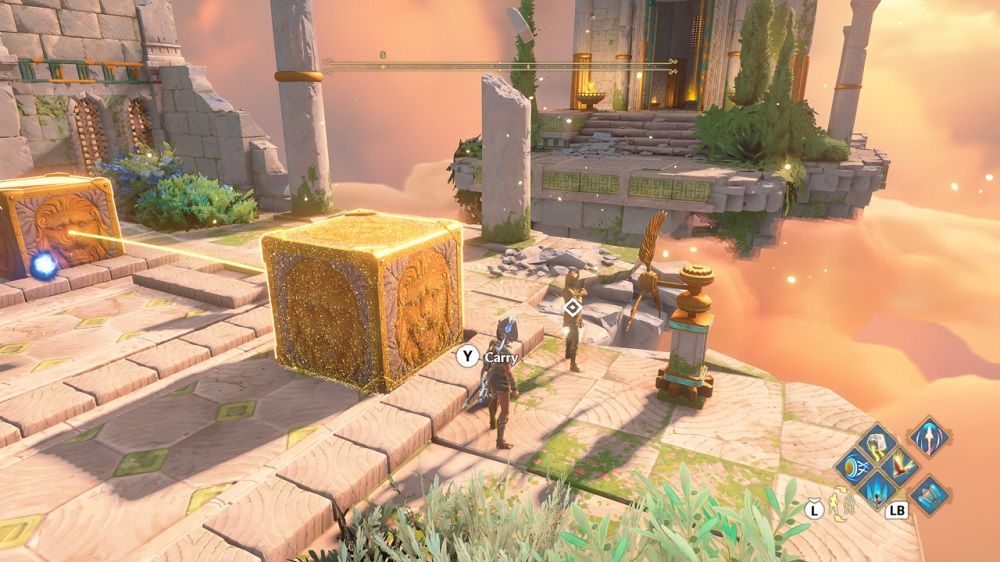 Move the blocks forward to cover as much of the air stream as you can, then use a well-placed Phosphor’s Clone to block the last of the air stream and stop the fan from moving, see above image. Once this is done, the gates to the chest will open and you can head over to claim the Mystery of Persephone relic. There is no second chest, despite the vault listing two, as you receive your second reward from Athena once you have left the vault. 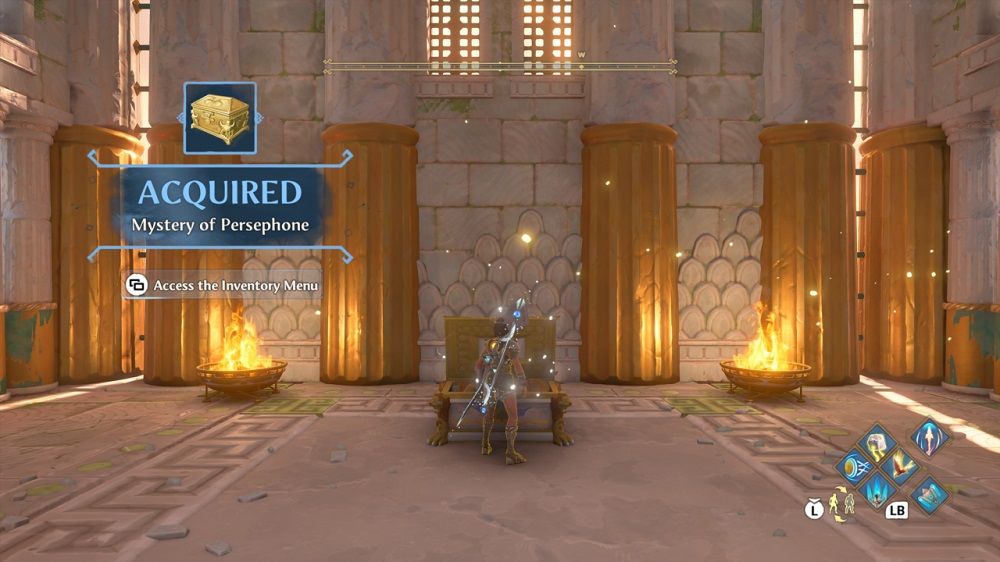 You will need to use the Immortal Field Breaker Godly Power upgrade given by Athena in order to access this vault, as you need to use Athena’s Dash to break the barrier.

While traversing this vault, you will eventually see the optional chest up to the left of where you are. In this area, there is a button that spawns a ball that will start rolling through various portals, as shown below. The arrow on the left is where the button spawns, and the arrow on the right is the portal. You want to hit the button to the right of your character, and then run down and grab the ball before it enters the portal. If you struggle to manage this, leave a Phosphor’s clone near the portal and use Phosphor’s Swap if you have already received it from Aphrodite to quickly apprehend the ball. 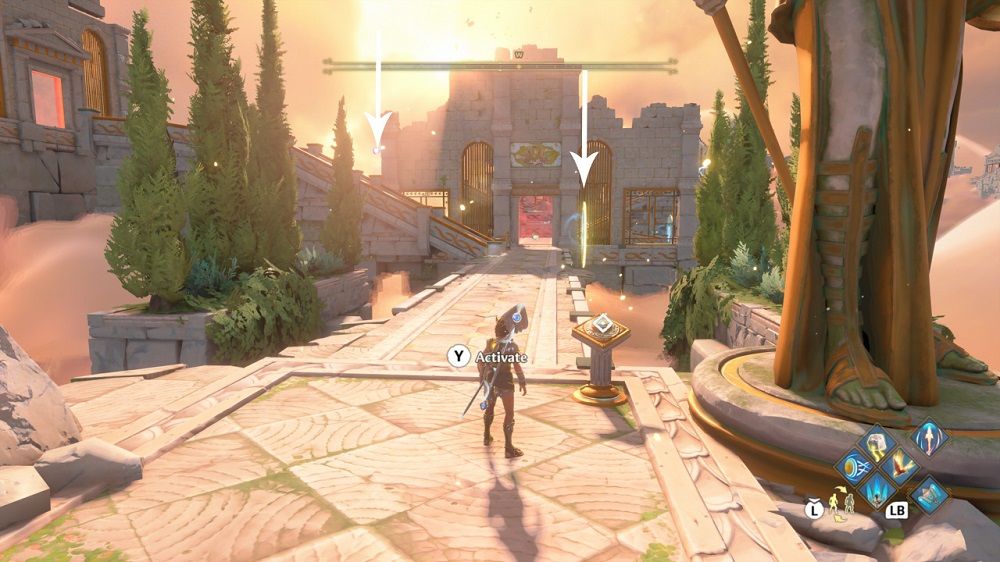 You then want to roll the ball up the slope on the left, or alternatively, you can hit it up with the Hephaistos’s Hammer attack. Stop near the top as there is a gap just in front of you. After the gap is an immortal barrier, behind which is a button that will move the platform on the right, as shown below. 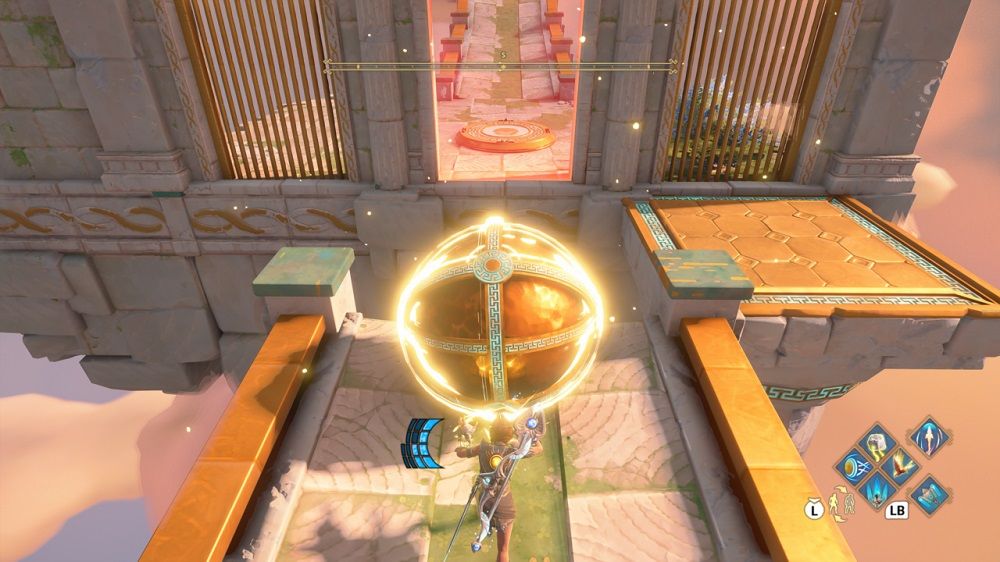 What you need to do is quickly use the Immortal Barrier Breaker to move through the barrier, stand on the button, and simultaneously pull the ball towards you with Herakles’s Strength. You have to do this very quickly, as once you “break” the barrier, it only lasts for a second or two and you need to be on the button so that the platform moves to create a bridge for the ball.

Once on the other side of the barrier with the ball, you need to roll/hit it up the slope again and put it in the recess at the top in order to open the gates to the optional chest. Then you can grab the Pan’s Flute relic. 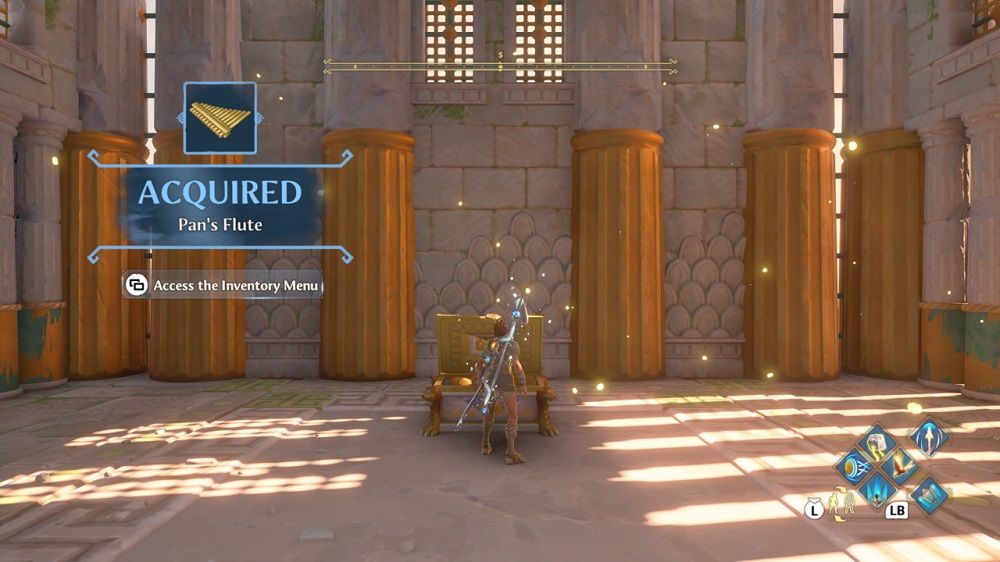 This is Athena’s final trial and you will likely notice that when you enter you will not be able to see the beam of light indicating the chest initially. Continue through the level until you do see it, as shown above, but just complete the puzzle in front of you for the time being. Once you have finished the puzzle, it will activate the jump vent at the top of the building — but don’t use it! Instead, you want to fly off the edge of the building shown below, and further down you will see a gap in the wall with an immortal field barrier, and next to that is an upwards airstream. 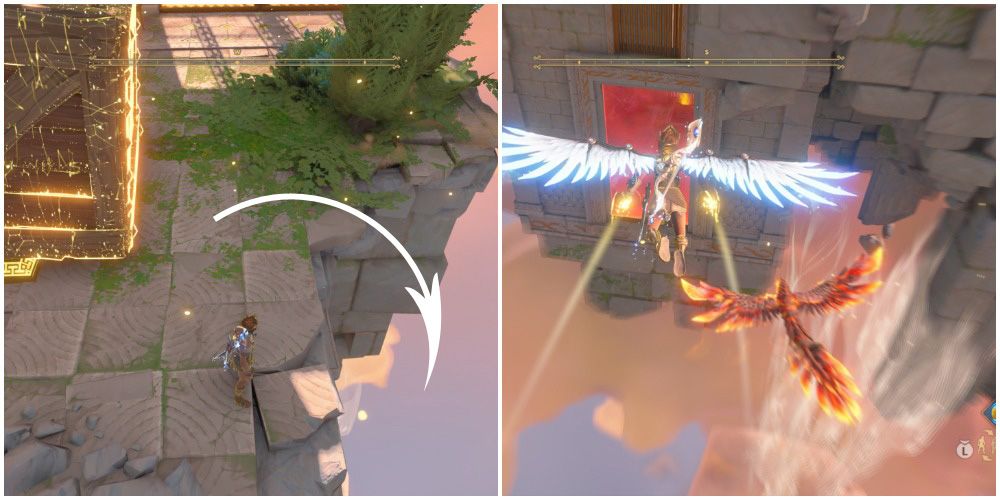 Use your Immortal Field Breaker Godly Power upgrade to break through the barrier and claim the Poseidon’s Trident Head relic in the chest inside. Afterward, break back through the barrier and use the nearby airstream to head back up and continue through the vault. Once again, there is no second chest in this vault despite the menu saying there is. Your second reward is Athena’s blessing, which she will give you once you leave the vault. 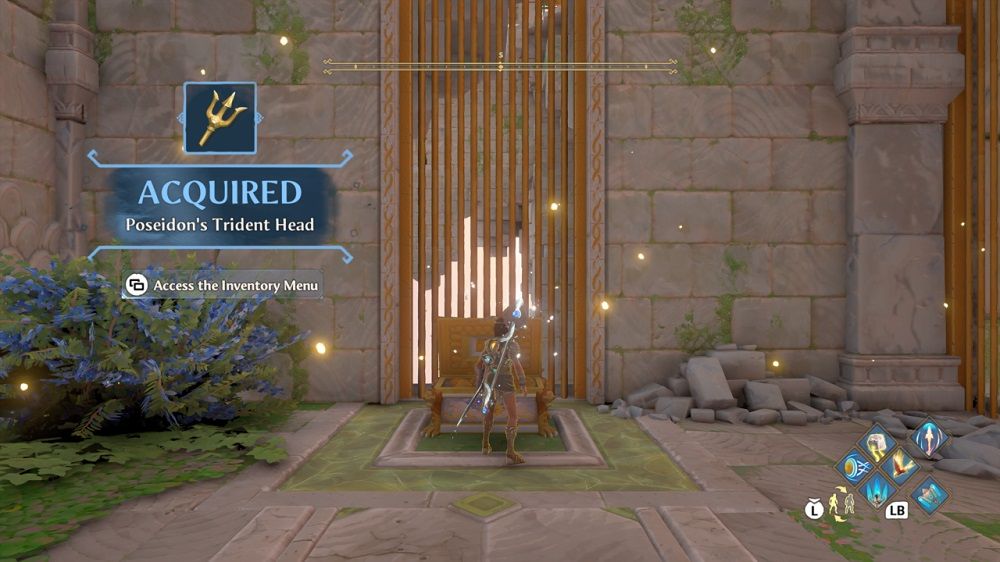 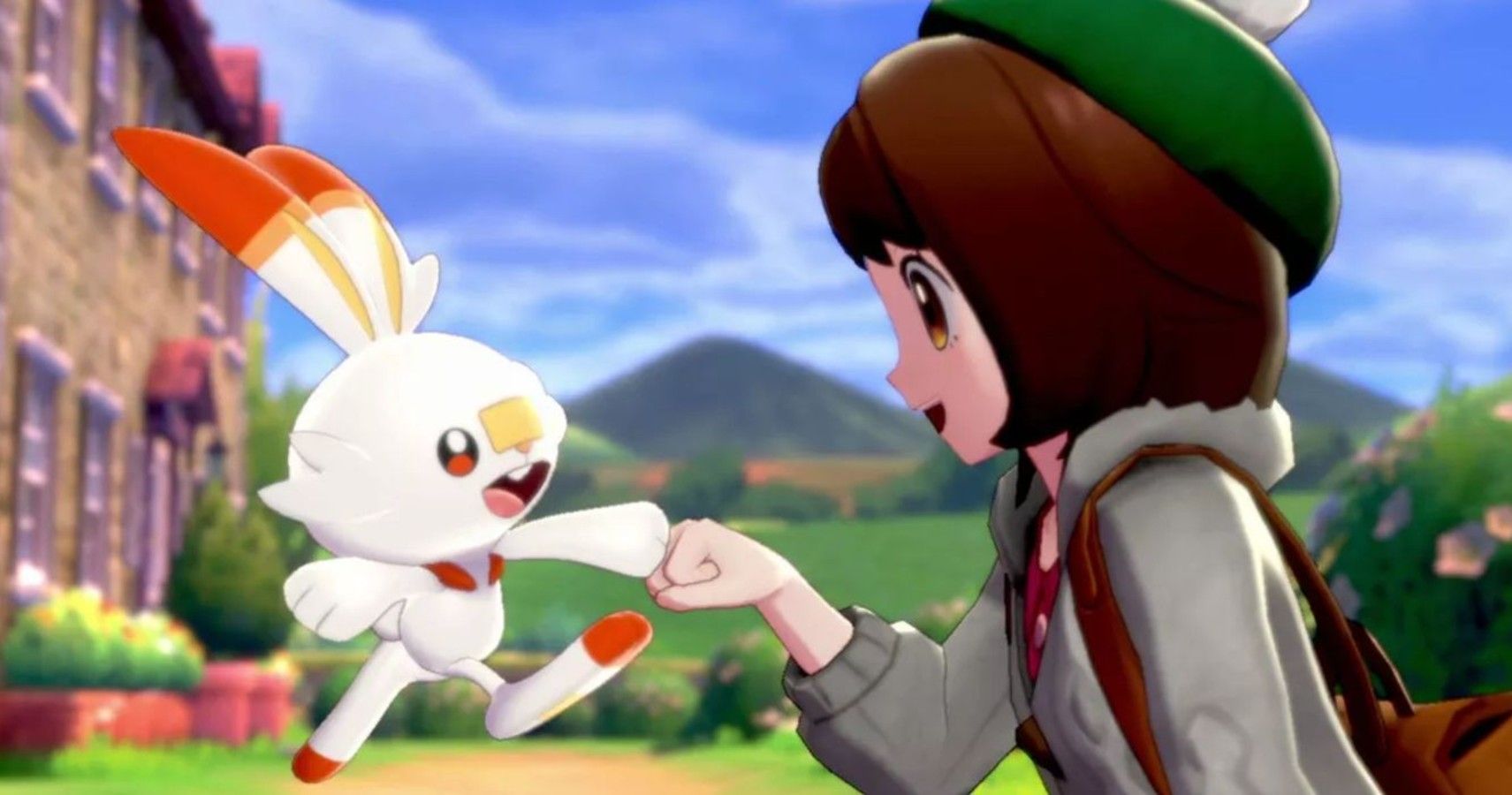