The name “No Man’s Sky” elicits varied emotions depending on where you look throughout the game’s five-year history. Back in, say, 2015 – a year before its release – No Man’s Sky was surrounded by excitement, anticipation, and most of all, hype. Whether it was the promise of unhindered space exploration, gorgeous visuals, or developer Sean Murray appearing on The Late Show with Stephen Colbert to say that the game will have more than 18 quintillion planets to explore, the game was highly anticipated to say the least. When it was finally released in 2016, the hype didn’t match the reception. The visuals were less than advertised, the gameplay was grindy and repetitive, and the lack of multiplayer caused people to second guess their decision to pay 60 hard-earned dollars for an empty universe.

Looking at No Man’s Sky today, after six major updates and more than 70 patches, the reception has been completely turned on its head. Free updates continue to roll out, Hello Games is working on its next project, and players continue to discover new planets and travel to the center of the universe. The community around No Man’s Sky has grown so loving that members rented a billboard across from Hello Games just to thank them for making a game they love.

If you’ve been thinking about getting into No Man’s Sky for the first time or giving it another chance, here’s what’s been added to the game since launch and what you can look forward to in the future. 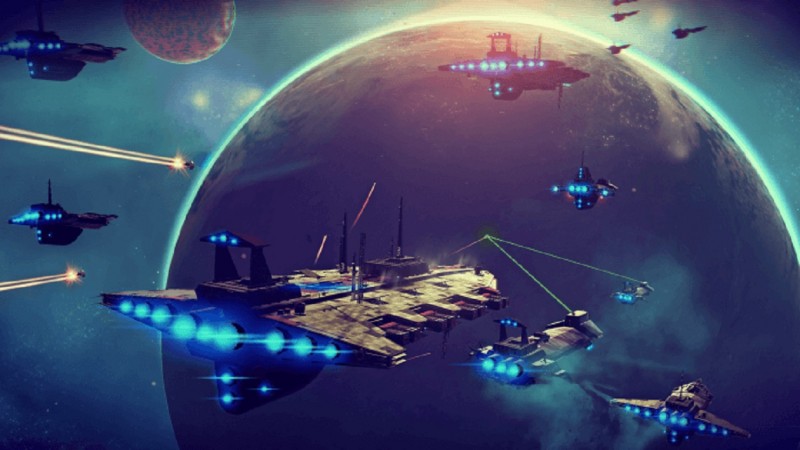 Build A Base On Land Or In Space

Early No Man’s Sky was barren. It was a collection of empty planets good for harvesting and little else. The first two updates, Foundation and Path Finder, started to turn these planets from desolate rocks into homes. The Foundation update added a major base-building component that has been built upon since 2016 to the point that it now allows for some incredible base-building creations from the community. Nothing makes me feel more like a space explorer than coming over a ridge on a planet I lovingly named “Jim From The Office” to see my massive, Taj Mahal-esque base on the horizon. Bases can hold portals, space-market terminals, a farm to grow your own resources; you can even house a ragtag band of aliens in your base, each manning their own terminal with their own lore-intensive questline to keep you company.

There are many, many items that can be used to customize your base, and – after further updates – you can also build your base underwater. These huge additions to customization go a long way to not only add content to keep players engaged with, but also a way to transform at least one of the intimidating 18 quintillion planets into your own little slice of galaxy. Your home doesn’t have to remain stationary, however; Foundation also added freighters for your portable base-building pleasure. Freighters are now used to store your collection of starships, increase storage capacity, and improve the space-nomad lifestyle. With open spaces to build and add to, your freighter can be as customizable as your base. The Next update also added fleets, which allows you to add smaller ships with different abilities to your intergalactic armada.

The Path Finder update added a couple vehicles to improve long treks across a planet’s surface, with a few land vehicles, and, in the Abyss update, a submarine. The improved traversal process cleans up a lot of the monotony of movement, making it easier and more fun to track down necessary resources.

Finally, the Foundation and Path Finder updates added four new game modes between them, each with their own appeal. Players can now choose between normal mode, a creative mode that allows for easy building; survival mode that increases the difficulty; and permadeath that adds, well, permadeath. Casual fans have their choices, and more seasoned players have theirs.

These two updates did a lot to improve the personality players are able to express in-game and cleaned up a lot of the boredom present throughout. However, as Game Informer editor Matt Miller wrote after the Foundation update, “I marvel at the sci-fi grandeur of this universe, but can’t escape the sensation that my role is in fulfilling a never-ending stream of secondary objectives.” The universe, after these first two updates, is still mostly directionless. 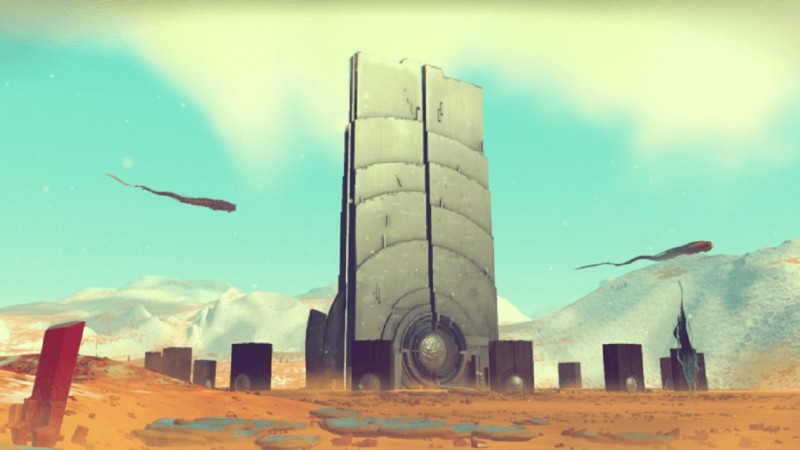 As of the Atlas Rises update, No Man’s Sky gained its much-needed direction. Atlas Rises is a full 30-plus hour narrative with an integrated mission structure and character-driven choices. I know this sounds surprising for people who gave up on launch, but the story adds a lot of content and explores themes the game only hinted at before the update. I won’t go into terrible detail about the plot for fear of spoiling the experience, but it essentially begins with a distress call from a fellow traveler. What follows is an exploration of loneliness and the nature of humanity’s exploratory instinct, as well as a sort of meta look at what No Man’s Sky as a game is supposed to be in the first place.

The addition of a story doesn’t absolve the game’s other faults, however. A lot of the narrative quests are repetitive and grindy, and for players not interested in the lore, it can be uninvolved. That said, for a game that initially only had mining and more mining, moral choices driven by in-depth character interaction were a welcome addition to a steadily improving experience.

Take Some Friends To The Beach

The three following updates did their part to make your character and the worlds they explore more alive. The Next update added a third-person camera which necessitated character customization; instead of a faceless wanderer, the player can now choose their clothing, colors, and pick one of the game’s five races. Now that you can see your own character, so can up to three friends, as Next added four-player multiplayer. The game had multiplayer elements added back in Atlas Rises, but it was incredibly limited. Up to 16 players, seen only as floating orbs, could use proximity voice chat to interact, but that was the extent of the initial multiplayer offerings. After Next, four players can fully interact with each other in a squad or against each other, in a party system or with random players, and can even play through the entire game from the beginning together.

The multiplayer concern was raised from the very beginning. The debacle all started in an interview with Sean Murray here at Game Informer in 2014 in which Murray stated that, while No Man’s Sky is not a multiplayer game, you can “see other players, and they can see you.” Very quickly after the game’s release, this was proven false by the community. Two players managed to stand in the same place on the same planet and were unable to interact or, at the very least, see each other. Since that moment, Hello Games has been constantly working toward giving the community the multiplayer experience they were promised from the beginning. Hello Games even made the controversy canon, as the lore explains how two travelers could stand in one place and not see each other. All of these changes build to the addition of the full multiplayer everyone dreamed of, but we will get to that with Beyond.

The Abyss update basically added Subnautica to No Man’s Sky, with full underwater environments and biomes, an underwater mission system, and as previously stated, underwater bases. If drifting alone in space doesn’t terrify you, now you can drift alone in an unexplored ocean. Finally, the most recent update, Visions, mostly functioned as a visual update, improving the environments of the planets and their oceans. 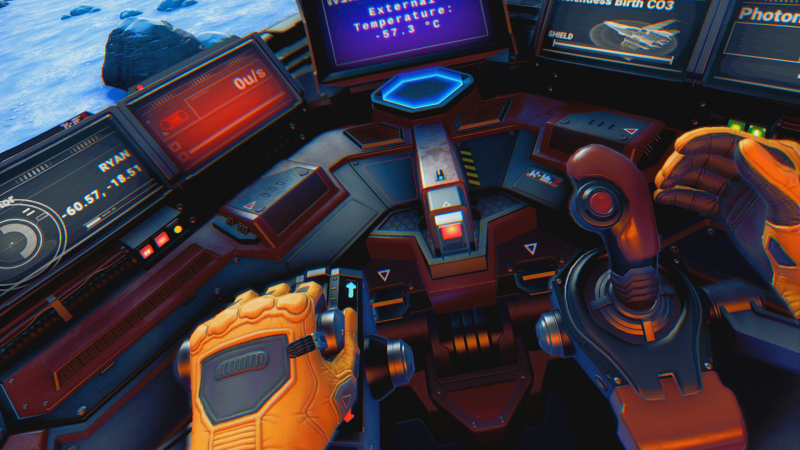 Looking To The Horizon

This leaves the upcoming update, Beyond. The update boasts three major updates, but the release date is, as of yet, a mystery, and only two of the three updates have been announced. However, as is implied by their title, the two updates we do know about do seem to be major shake-ups to the current game, seeking to change up the gameplay in some exciting ways. Firstly, multiplayer is being implemented in its fullest form in No Man’s Sky Online. Instead of limiting the game to simply four players, everyone will be able to interact with anyone at any time. This means no more four-player missions and no more floating orbs, but the extensive multiplayer the community anticipated on launch. Soon you will be able to actually see the other players, and they will actually see you. Hello Games has learned from its past mistakes, however, and are being very careful to temper expectations. The official announcement for No Man’s Sky Online reads, “Whilst this brings people together like never before, and has many recognizable online elements, we don’t consider No Man’s Sky to be an MMO.” It is currently unknown what constitutes a recognizable online element, but it is known that the update is still free and will not include microtransactions. The second update is a pretty huge addition to the gameplay – No Man’s Sky VR. Coming to PlayStation VR and Steam VR, this update will bring all the immersive aspects included in previous patches full circle.

No Man’s Sky continues to grow, and it doesn’t show signs of stopping. In a recent interview with GamesIndustry.biz, Murray said, “Beyond is on the horizon for us, we’re working very hard on that at the moment. After that, I think we’ll continue to update No Man’s Sky. But a thing I’ve learnt is, I never like making promises when I don’t have to. We’ll see, right? As long as people are interested and playing it, it’s something that the team here is passionate about. We’ll only do it while we think there are fun and interesting things to add.”

Now is the perfect time to return to No Man’s Sky. Quality of life patches and substantial content updates have provided more structure and gameplay than ever before, and even more is on the way. If you turned away from No Man’s Sky in the beginning, maybe it’s time to explore the galaxy one more time.

For more on No Man’s Sky, check out our interview with Sean Murray on the Beyond update, or our impressions of No Man’s Sky VR.