The competitive multiplayer game lets players choose from a diverse roster of aliens, humans, and robots to battle on the planet Crucible, where they can collect the resource Essence while avoiding death from fellow hunters and the environment.

Louis Castle, cofounder of Westwood Studios and co-creator of games such as Command & Conquer, joined Amazon in 2017, and he runs the Relentless Studios game studio at Amazon in Seattle. Relentless made Crucible, which has elements of multiplayer games such as Blizzard’s Overwatch, Riot’s Valorant, and even Call of Duty.

The game debuts with three models: Heart of the Hives (4 vs. 4), where players battle big bosses and capture their hearts to win; Alpha Hunters, eight teams of two players each in a final team standing match; and Harvester Command, where players capture and hold spots on a map. I talked with Castle about how Amazon made the game and the thinking behind its design. We’ll find out soon if those decisions resonate with players who are eager to play new games while in lockdown.

The game was originally scheduled to come out in March, but Amazon decided to push the launch back to May 20 so the team could deal with the pandemic’s disruption as they were finishing up the title, Castle said. Castle said the game was made from the beginning to be watchable, and all eyes are going to be on this first major PC game release from Amazon.

Here’s an edited transcript of our interview.

GamesBeat: I was chatting with a developer who said this project started about four years ago?

Castle: It’s a little difficult to pin it down. The game started about five years ago, but it’s gone through some pretty big changes. It was announced before I joined the company at a TwitchCon in September 2016. When I came on board we had a playable version, and we had a community group already put together, 100 people or so. It was quite a good number. From the very beginnings, when it was barely stood up as a playable prototype, it’s always had community guidance.

When I came to Amazon it was the project that resonated with me as being customer-obsessed, the way Amazon likes to be. It’s one of the things that attracted me to Crucible. All the leadership is tied into community. It’s been built hand in hand with a bunch of advisors. 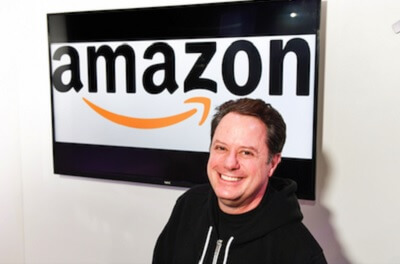 GamesBeat: How big would you say the team was when you got there? Were you going in just to run the game, or more to manage a larger studio?

Castle: The quick answer is we’re not supposed to give exact sizes of teams. But it’s smaller than teams that would be working on competitive titles in the same space. It’s nowhere near some of the larger teams I’ve worked with in my career. It’s a relatively small, scrappy team.

GamesBeat: Was it a prototyping team or a production team at that point?

Castle: When I came on board there were two groups at Amazon. Amazon has a principle of single-threaded leaders, so there were two single-threaded leaders that had development teams under them. When I came on board, one of those groups was being redistributed to start on The Grand Tour and to do some stuff for Lumberyard. The other one was Crucible. It was a reasonably sized, adequate — it was bigger than a prototype team. It was a full-size development team. They had a game that was playable. I had a chance to play it in the lab, and it was quite fun. There were a number of concerns at that time, which have of course been remediated since then, but right from the get-go the game has always been a lot of fun to play.

GamesBeat: How did this get going?

Castle: I was called by my friend Rich Hilleman. I’d known Rich since I was in high school, so it’s been a long time. He said, “Hey, you should talk to Mike Frazzini.” It just so happened that I was contracting for companies like Kixeye and Kabam and a bunch of others. Everything was closing out at the same time, and I was looking for new work. I talked to Mike and there was a lot of talk about the kinds of roles I could do at Amazon.

He asked me point-blank, “What would you like to do? What would be your favorite thing to do?” I said, “Well, I’ve been in the trenches for a few years now, working on actually touching the code again. I like being closer to the products. It’d be great to be a head of studio again. I like working with the teams directly.” He said, “We can work that out.” I went in and did the interviewing at Amazon. I love the teams I’m working with. I love the work. I’m super happy to be doing it.

Mike Frazzini shares internally with our group the original pitch to the senior team leaders at Amazon, the same way that Jeff Bezos shares that letter to the shareholders. Just a reminder of the north star. We have a real reason to be here. Amazon’s games, for ages — as a company, AWS, is used by about 80 percent of the top game companies in the world. All the features, all the services we offer. We’re also selling games too as a retailer. It’s not that big of a jump to say that we should not just be offering up the stack tools, but also down the stack tools. That’s how Lumberyard got built, and there are lots of cool things still coming from game tech.

We’re all in on games in lots of ways. One of the things you should be doing if you’re making products for customers is knowing you understand the customer’s position. As an internal customer, having game teams makes a lot of sense. It slowed us down in the beginning a bit, because we were trying to do an awful lot of things at once. I’m proud of how they came out and people rallied around the excitement of building something that’s truly obsessed right from the team level. 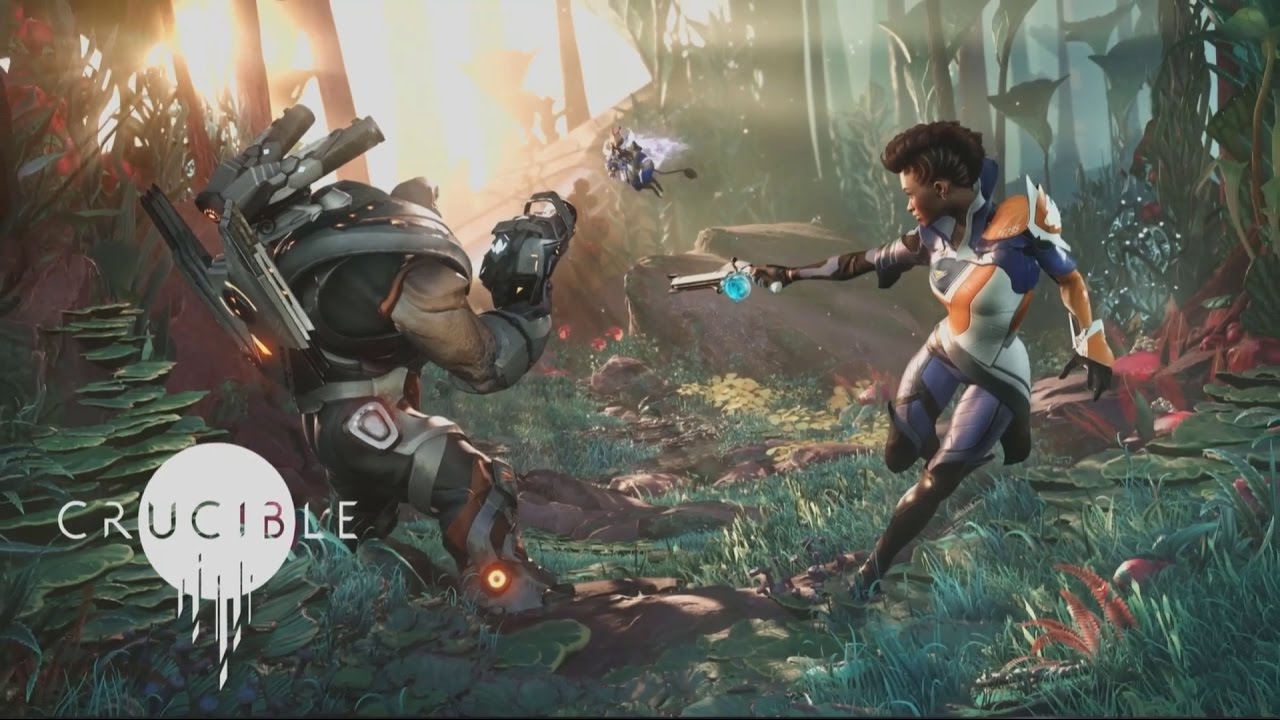 Above: Crucible is coming on May 20 on the PC.

GamesBeat: Was it difficult learning how to use Lumberyard, using a new game engine?

Castle: Lumberyard has a lot of interesting features about it, because it’s been built with a lot of ideas around feedback from customers and things like that. We’re working very closely with that group and with other customers on unannounced products. It’s the same internally. It was nice to have a team that’s dedicated to a technology base right there next to you. It’s also caused some amount of friction, because it’s a brand new thing.

The nice thing about Amazon is we can build whatever tools we want. We were building on Lumberyard because that made a lot of sense at the time. We may or may not be doing that. I’m sure it just depends on the project. But Lumberyard is a great tool. It’s good at many things that it does. Lots of companies, especially simulation companies that love the highly technical scale issues in Lumberyard — for game development it’s not as mature as some of the other game engines, but we’ve managed to make something that’s as competitive as anything else out there.

GamesBeat: When you came in, did you reboot the project in some way, or re-orient it?

Castle: There was something I did. I first came on board in February. By July we had a big playtest, about 250 players. It was pretty interesting that in July 2017, we had 250 people playing this in the wild. I liked the feedback from all the customers. It was clear that we were on to something exciting, and they were itching to play it.

This was before PUBG had become too big, and way before Fortnite. The game was a character-based shooter. Even back then it had some battle royale aspects to it. It had all these other features you’re seeing that are unique when you play it, the attention to detail in the map and the placement of objects, the MOBA aspect of characters leveling up during the match. All this stuff that you don’t see in other games in the genre. The reason Crucible predates all those games — it has not been developed in parallel to the industry finding all the fun in these competitive games.

I felt like we needed to do a big technology upgrade on our networking infrastructure. Some of the team members convinced me that we needed to change some of the core tech around entity component systems, so that we would be able to have better scalability. For the non-technical people out there, it’s more about making this a fair place to play. It’s performant over many kinds of connections. We could update the graphics quite a bit with some dynamic global illumination. Stuff that’s in Unreal Engine 5 now, that’s in Crucible. It’s not quite exactly what they’re doing, but it gets the same effect.

There was a visual upgrade. Online play had to be better. That would also require us to rewrite the game. The previous version of the game was live for the full year-plus that it took to rewrite the game engine, just so we could keep playing with our alphas and make sure that we refined the game. We have a game that’s been in testing for more than three years, more or less in the same state it’s in right now. That shows in the quality of the experience and the balance of all the characters.