The NFL loves its superstars, from team-lifting QBs like Tom Brady to game-changing wide receivers like Antonio Brown, and QB-crunching monsters like Aaron Donald. But Madden hasn’t always been able to highlight these kinds of players in ways that not only make them powerful but like they perform in real life.

This year’s new Superstar X-Factor feature hopes to address this fact and not only make these players feel like the stars they are, but also influence Madden across its many modes.

Young says there’s another reason for the new feature: How can the game go beyond ratings? “I think ratings are really good at the measurables,” he says, “the combine type stats like speed, but for instance, Tom Brady has never been a great quarterback in Madden. What we’ve done is try to differentiate the quarterbacks and give them very unique things based on their archetype.”

Here’s how it works: There are around 70 Superstar abilities in the game. Some players have none, some have multiple abilities. These abilities are shaped by real-life players’ skills and in-game player archetypes. Thus, you aren’t going to see a slower, bruising running back get abilities related to more nimble backs.

Here are just a few examples:

Most of these abilities have counter-abilities across the line of scrimmage, so that there are no automatic victories on the field, but you obviously want to pay extra attention to these players. To this end, players with superstar abilities will always be marked so everyone knows.

X-Factor players have to play themselves into the zone for their zone ability to activate. For example, if JuJu Smith-Schuster catches four run-after-the-catch (RAC) passes of 20 yards or more, he’s in the zone. When he’s in the zone he’ll usually win single-coverage RAC passes with an animation that gives him an advantage in that situation.

These zone abilities are powerful, but they can also be “turned off.” Brady’s quick read zone ability deactivates when either he scores a touchdown or you sack him.

Abilities aren’t just in Franchise mode or Play Now, they’re usable throughout the game, including Ultimate Team and the new Face of the Franchise mode. This should shake up what players use in Ultimate Team as well as help you further define your QB in Face of the Franchise. In regular CFM, abilities for draft prospects are tied to their development trait. So you’ll have to keep an eye on any players with abilities as you are scouting. Then you can draft them and watch them mature and unlock their abilities.

“What we’re finding is it’s made a lot more teams a lot more interesting to play,” says Young. “Right now, people in the office love playing with the Browns… It’s hard to say as a Steelers fan, but they are probably one of the cooler teams because they have superstar guys on both sides of the ball.” 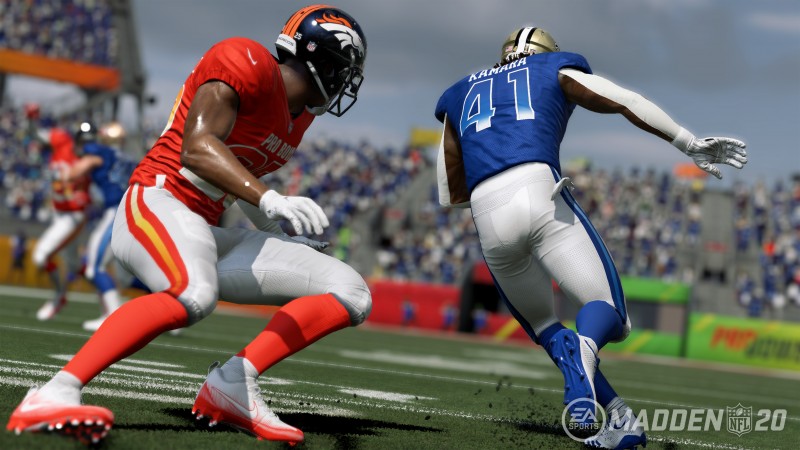 Madden NFL 20 ships for PS4, Xbox One, and PC on August 2. To learn more about the game, read about what’s new in Franchise mode, the new Face of the Franchise career mode, and how the developer is addressing last year’s gameplay issues.