Magic: The Gathering is set in an expansive multiverse where almost any vibe can be found. From the Steampunk splendours of Kaladesh to the art-deco heights of New Capenna, you can build your Commander deck to fit any aesthetic you want. With Halloween coming up, you may be wanting to build something particularly spooky to chill your pod with at the table.

Instead of aiming for raw power and crushing your group as fast as possible, this list will help you pick out a commander that fits the spirit of Halloween. They’re creepy, sure, but also a bit camp and theatrical. You’re more likely to be cackling maniacally than instilling mind-numbing terror, but that’s all the fun of Halloween. 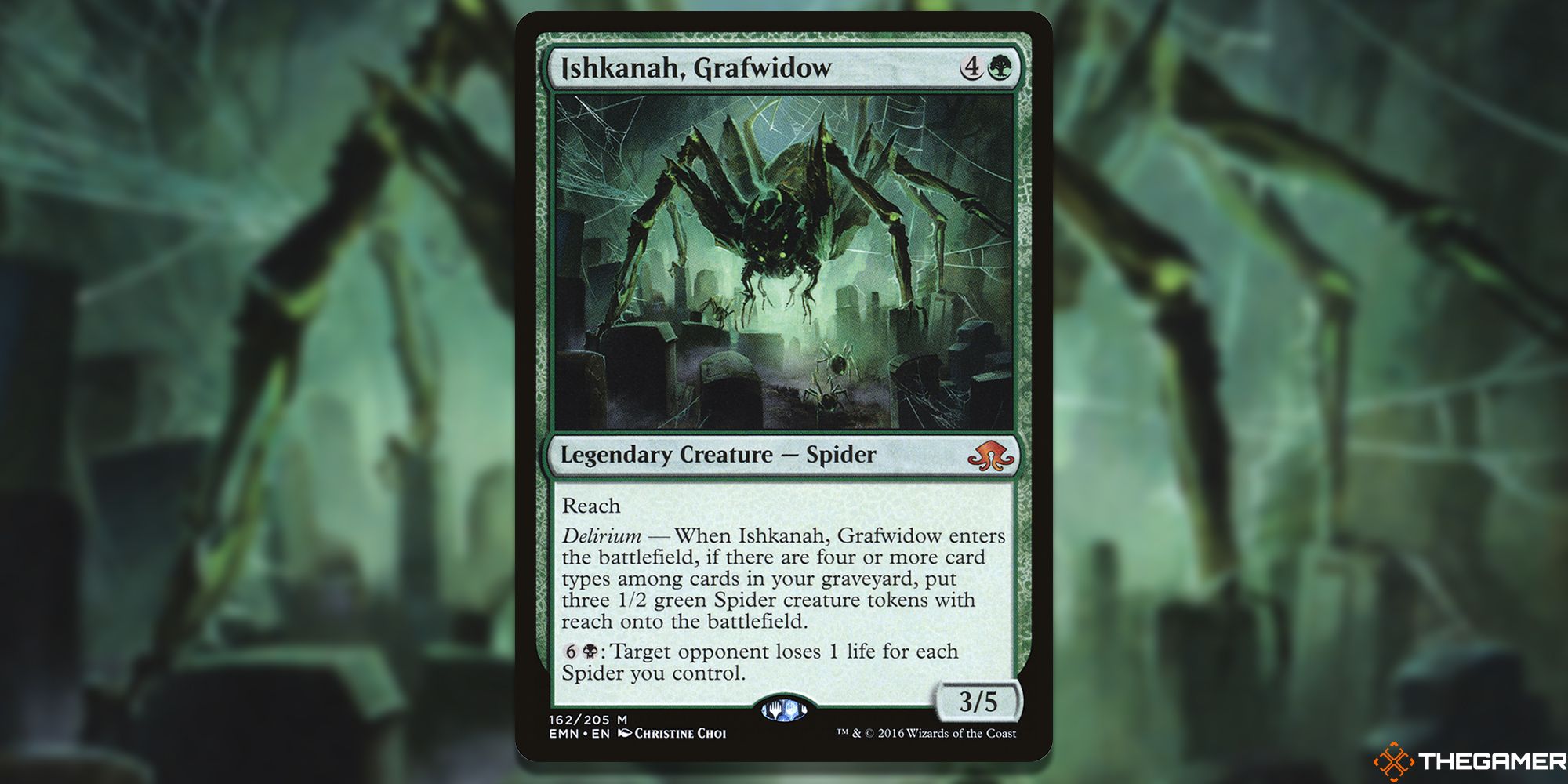 The only thing worse than one, big Spider are lots of smaller ones following behind it, and Ishkanah, Grafwidow can do both. A great Spider tribal commander that rewards you for having lots of different card types in your graveyard with 1/2 Spider tokens.

There are lots of ways to make even more Spiders in black and green, such as Arachnogenesis, Arasta of the Endless Web, and Curse of Clinging Webs. Don’t forget the many excellent nontoken Spiders too, like Nyx Weaver, Rotwidow Pack, or even Unfinity’s Spinnerette, Arachnobat to buff up your brood.

Once your battlefield is adcequately gross and Spider-y, just activate Ishkanah’s ability to drain an opponent of a ton of life. Maybe follow it up with throwing a few novelty rubber Spiders at them, it is Halloween after all. 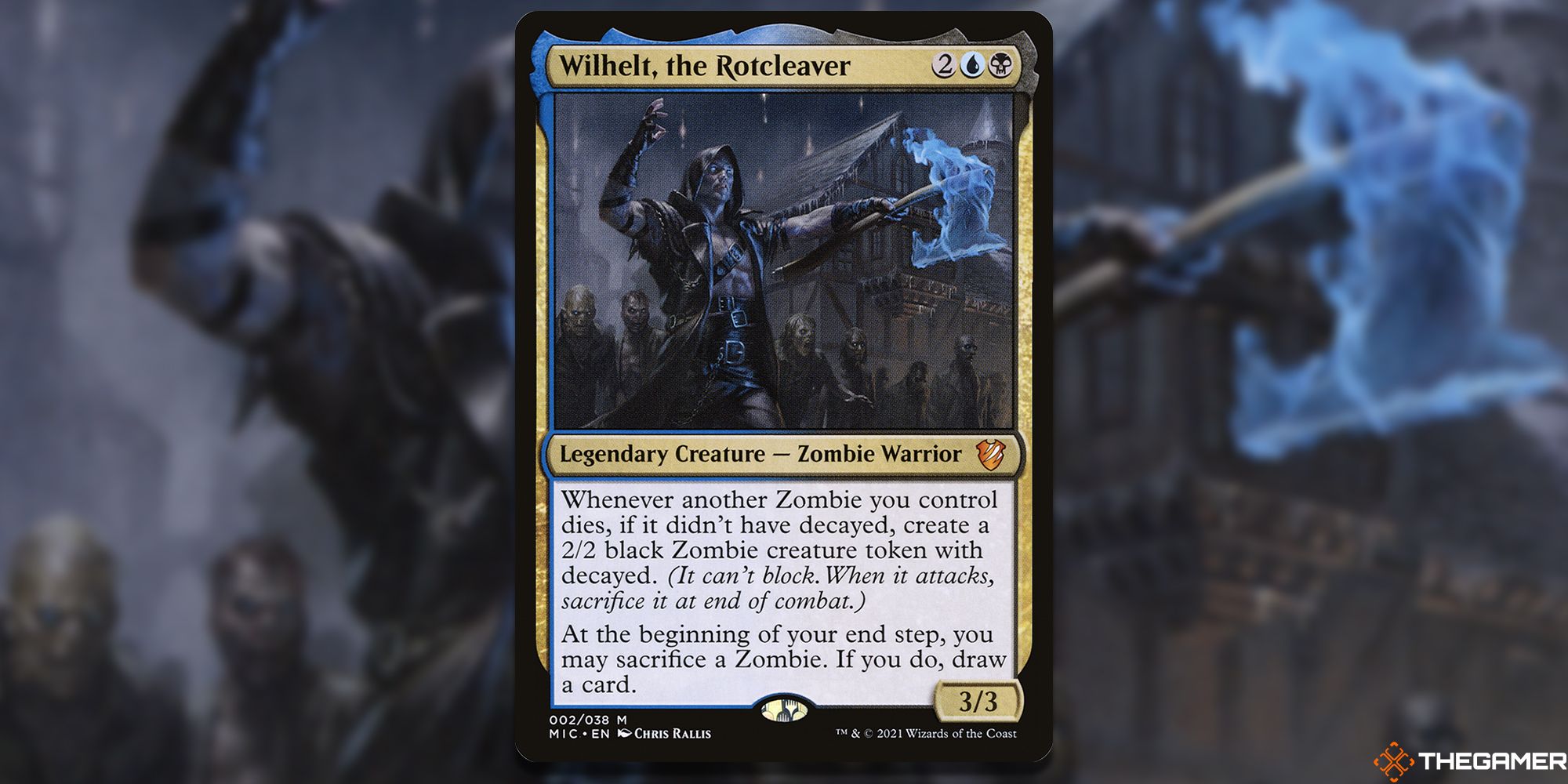 While this list isn’t sacrificing spooky theatricals for the sake of power, sometimes the two come hand-in-hand, and you get cards like Wilhelt, the Rotcleaver. A creepy Zombie utterly infatuated with Innistrad’s famous necromancer Gisa, he’s also one of the strongest Zombie tribal commanders in the game.

It’s tricky to not make Wilhelt a really powerful deck. Zombies are one of Magic’s most-supported creature types, and thanks to cards like Rooftop Storm, Diregraf Camptain, and Gravecrawler you’re able to easily find numerous ways to go infinite without sacrificing too much of the spooky-factor.

If you don’t want to completely demolish your Halloween pod, you could just run some of the game’s most iconic Zombies without the likes of Rooftop Storm. Cards like Champion of the Perished, Headless Rider, Midnight Reaper, and Diregraf Colossus are still creepy and powerful, especially with Wilhelt, but won’t completely crush your board for a fairer, scarier game. 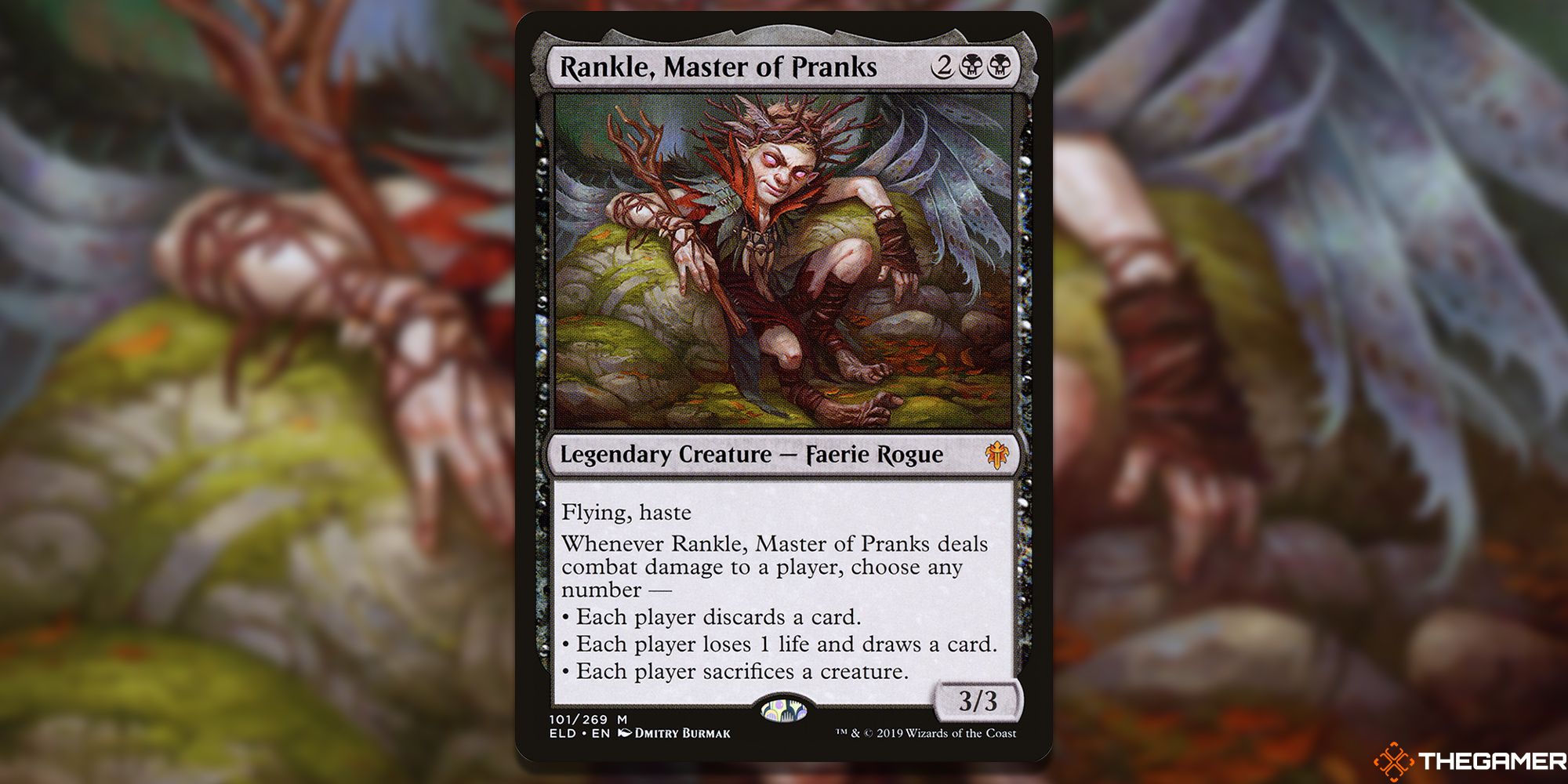 Halloween isn’t Halloween without trick-or-treaters, but with very few children in Magic, and even fewer as eligible commanders, Rankle seemed to be the next best thing. Cheeky, mischievous, but also potentially giving the table a reward under the right circumstances, he’s the quintessential Trick or Treat creature.

To build this, you’re likely going to want to run a few cards that trigger when other things are discarded. Stuff like Waste Not, The Raven Man, or, if you’re feeling super evil, Tergrid, God of Fright would be good inclusions here. You’ll also need ways to either bounce Rankle back to your hand to keep your options open, or just kill him off with a sacrifice and bring him back into play through practically any graveyard reanimation.

Alternatively, you could play it a little bit nicer by relying more on the card draw aspect. By using cards like Underworld Dreams and Sheoldred, The Apocalypse, you can give your opponents the treats they’re hoping for while also giving them a nasty fright at the same time with plenty of life drain. 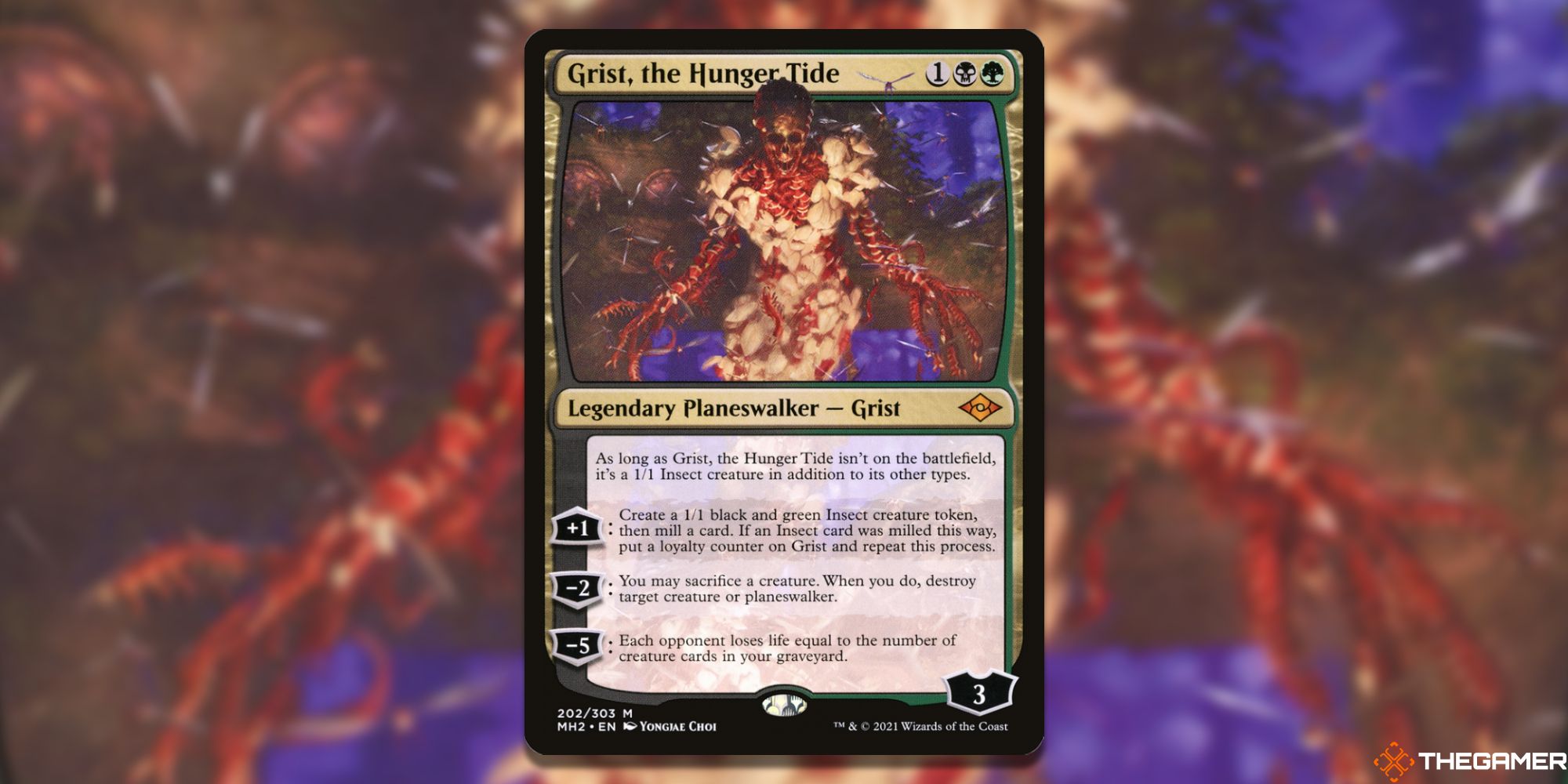 The second bug on this list, Grist is unique in terms of Planeswalkers in that, despite not saying so, she is a valid commander. This is because she’s a creature when she’s anywhere other than the battlefield, which includes the Command Zone.

This is one deck you’d want to play for pure shock value. A Planeswalking bug that recruits the swarms of whatever world she is in to devour everything in her path is utterly terrifying, and building her up as an Insect Tribal deck will really add the creepy-crawly factor to your game.

Building a Halloween Grist deck is easy enough: just pick lots and lots of Insects. Scute Swarm, Hornet Nest, Hornet Queen, Giant Adephage, and Moldgraf Millipede are all great choices. If you’re leaning into her graveyard strategies with some self-mill, also chuck in things like Izoni, Thousand-Eyed to make lots more Insect tokens and Old Rutstein to reward all that milling you’ll be doing. 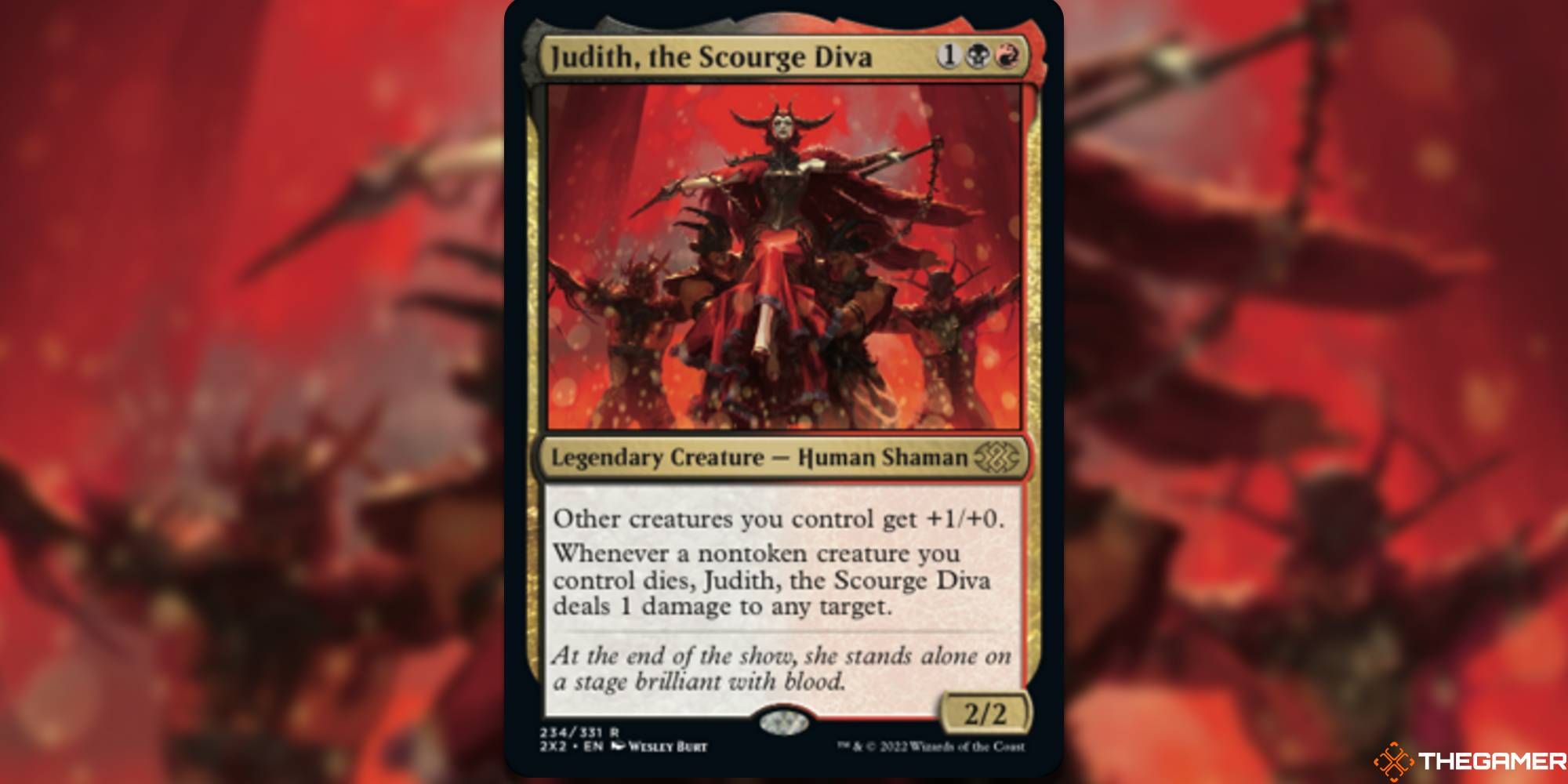 Judith, The Scourge Diva is the personification of Halloween theatrics. She’s a queen, she’s the moment, she’s the whole vibe. The Grand Dame of the Cult of Rakdos on Ravnica, she combines the Rakdos’ thirst for blood and love of performance, prompting you to build up a big board before sacrificing everything for gain.

Judith isn’t the scariest commander out there. She’s just a performer, not a Demon or Zombie or anything traditionally spooky. But she can be an absolute terror to play against, especially if you’re combining her ability with others like The Meathook Massacre and Bastion of Remembrance. Throw in a Viscera Seer for instant-speed sacrifice, and you’ll be dishing out damage with Judith super quickly.

If you wanted to be even scarier, try enchanting her with Phyresis to give her infect. That way, the damage she deals can knock the entire board out of the game in only ten deaths. It’d be put a major target on your back, but being the centre of attention is what Judith is all about. Why not have a bit of torturous fun? 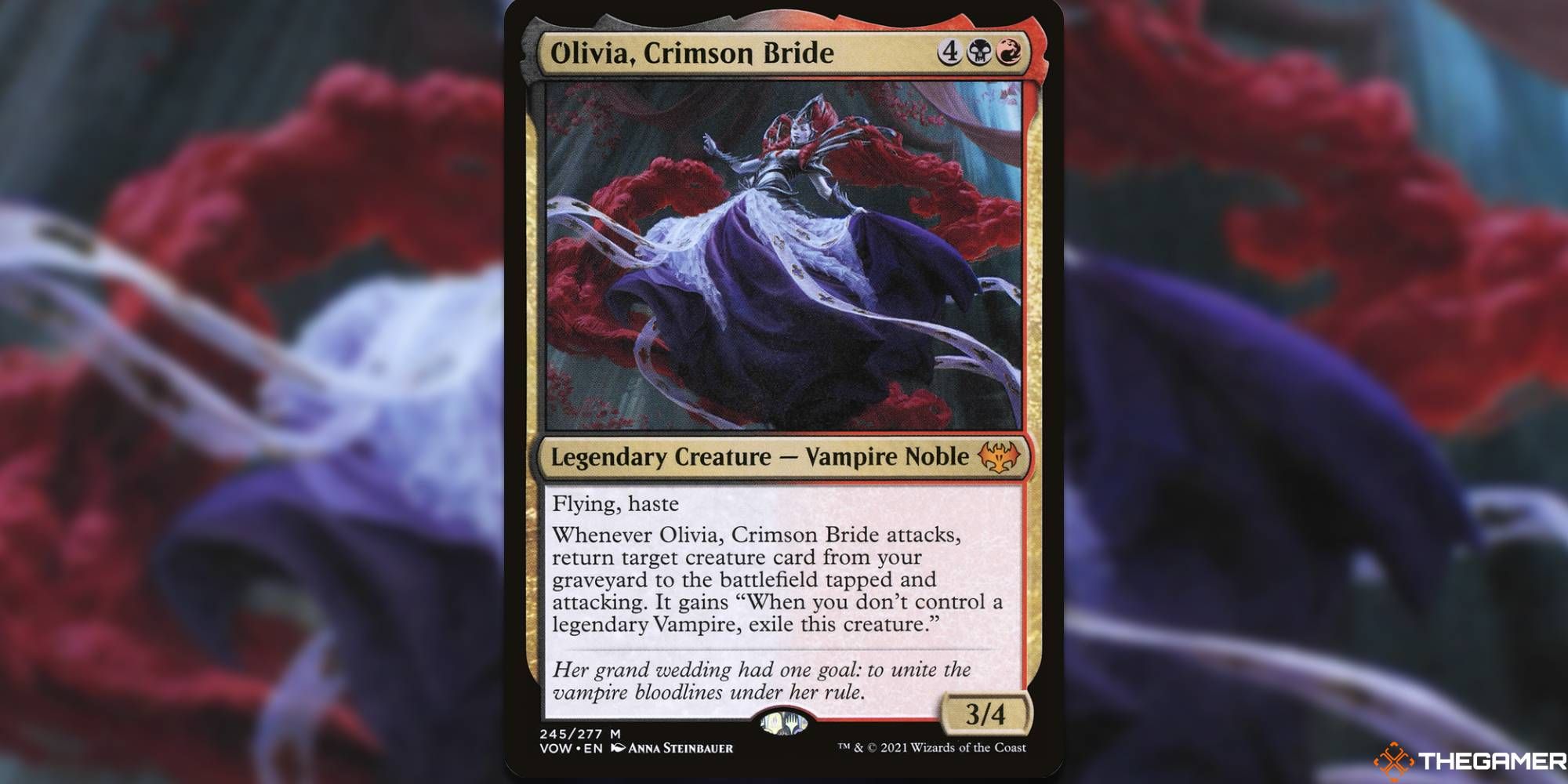 You can’t have Halloween without a Vampire, so go for broke and run Innistrad’s Vampire Queen, Olivia Voldaren. This blood-sucking aristocrat is all about getting more big names in Vampire high-society into play, and then using them to bring even more out of your graveyard and into play.

Magic is full of iconic Vampires. If you want to go the classic Dracula-esque route, you’ll want Innistrad’s elite, such as Anje Falkenrath; and Strefan, Maurer Progenitor. The Vampires of Ixalan are also a good shout too, most notably Vito, Thorn of Dusk Rose. For a slightly more unconventional take, look no further than Zendikar’s much more aggressive, Elvish Vampires, like Anowon the Ruin Sage and Zagras, Thief of Heartbeats. You could even go to the only-technically-Vampires of Kaladesh and play the likes of Yahenni, Undying Partisan and Gonti, Lord of Luxury.

The scary thing about Olivia is that, if she can keep swinging, you can keep bringing creatures into play from the graveyard. With a sacrifice outlet you could be triggering a Gray Merchant of Asphodel every turn, for example, to help wipe out the board. Playing Magic’s most famous Vampires and efficiently taking out the board while doing it? Only Olivia could pull that off. 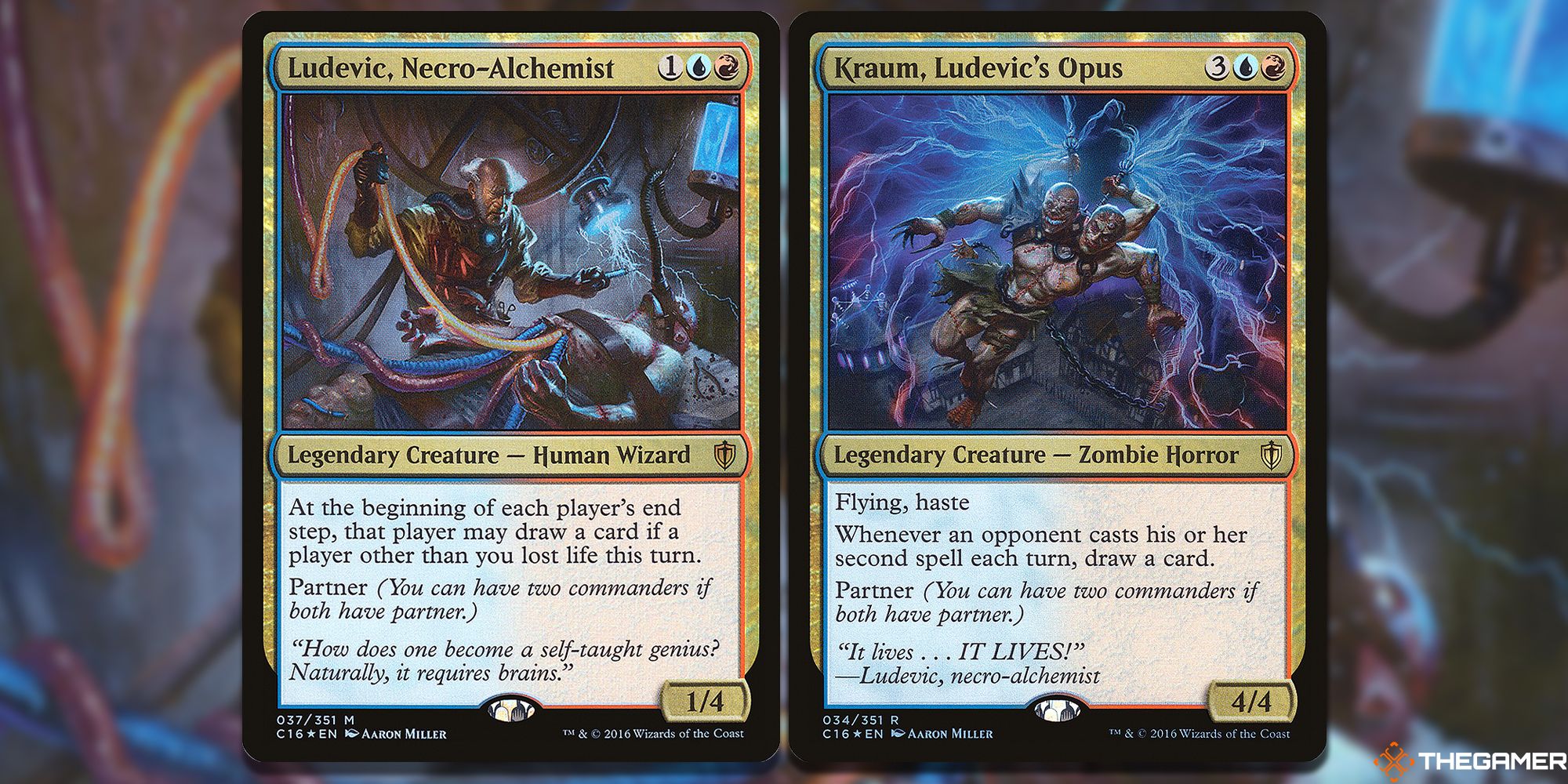 Another Halloween staple is the Mad Scientist and their ‘masterpiece’. Ludevic’s taken a few whacks at perfecting his zombie art over the years, but Kraum was when he finally got one right and made a real monster.

This is the only partner pair on this list, with Ludevic prompting your opponents to go for each other instead of looking too closely at what you’ve got going on. With Kraum on the battlefield at the same time, you’ll also be drawing cards as your opponents go all-out hoping to take each other’s lives down for a measly single draw of their own.

In all honesty, Ludevic and Kraum’s abilities don’t feel too Halloweeny at first – why would a Zombie care about what your opponents do? However, this deck is all about Sowing discontent across the table, and turning your opponents against each other like scared villagers facing an unknowable monster. Your opponents aren’t playing you, they’re playing their own greed, which is at the core of plenty of horror movies. 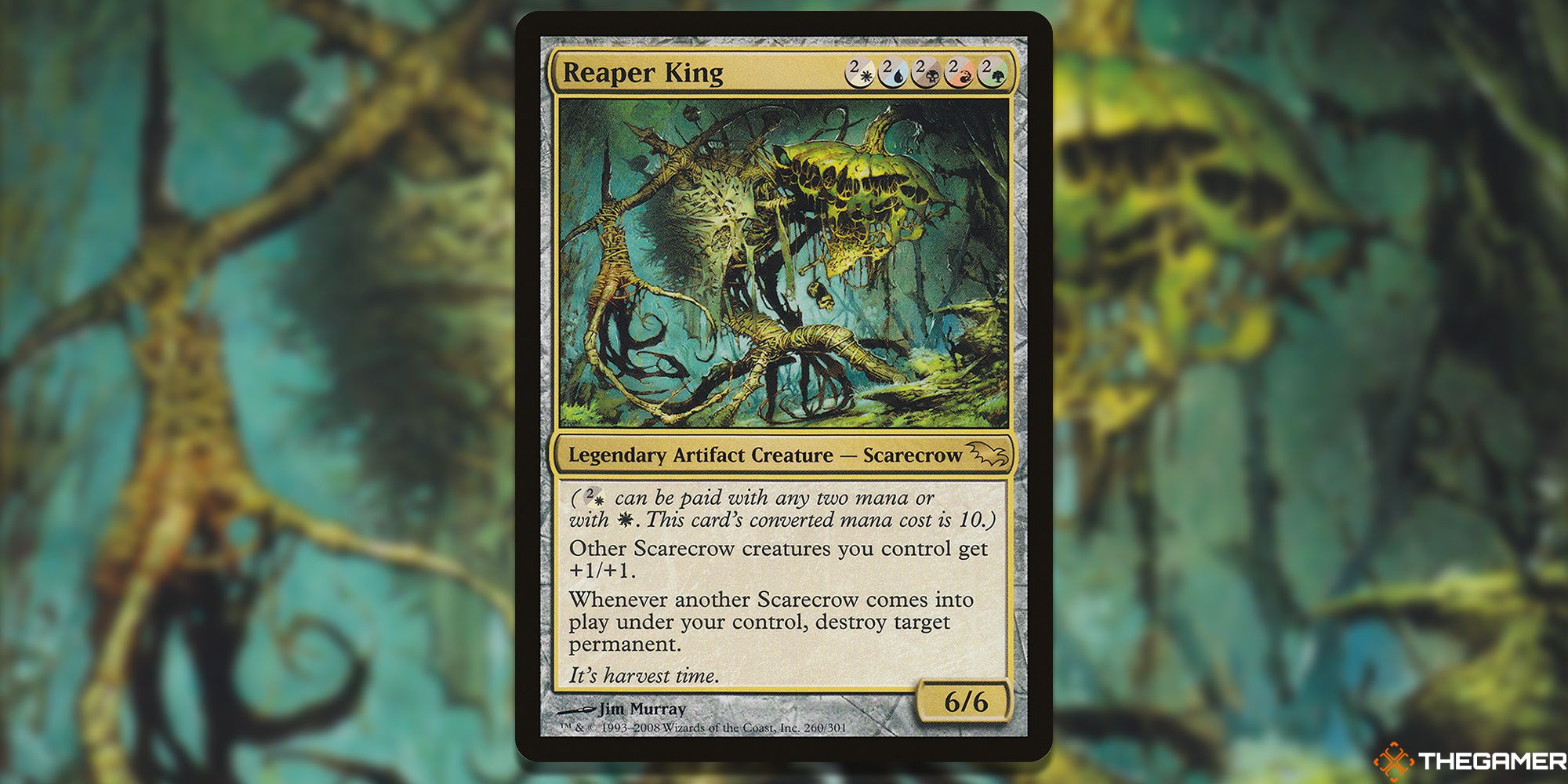 Scarecrows are terrifying – it is in the name, after all. Stood alone in a field through rain or shine, they strike the same automanophobic nerve as shop dummies or puppets. It’s unreasonable, of course, as scarecrows aren’t alive. That is, unless that scarecrow is the Reaper King, and then the fear is entirely justified.

Scarecrow Tribal isn’t something that many players would think is even viable in Commander, and yet the Reaper King’s ability makes even a single Scarecrow a massive threat. You can destroy any permanent on the board, which includes your opponent’s lands. Considering how many Scarecrows just cost one or two generic mana, being able to eat away at your opponent’s lands, commanders, and anything else they’d need to stay in the game is utterly devastating.

Throw in things like Maskwood Nexus and Reflections of Littjara and you’ll be shutting down the game and bringing it to a close incredibly quickly. Alternatively, if you want to keep things at a more wholesome level, you could decide to just keep Reaper King waiting in the Command Zone, looming over the game and bringing terror without ever even being cast.