Consequently, the Gods featured in this set have played roles both active and passive in Dungeons & Dragons stories for decades. The history of each God is as deep as the ocean, and it would be an easy task to provide them with multiple articles all their own if we could. Instead, let's glaze over each God's profile to see just how well their characteristics are reflected in their card mechanics. 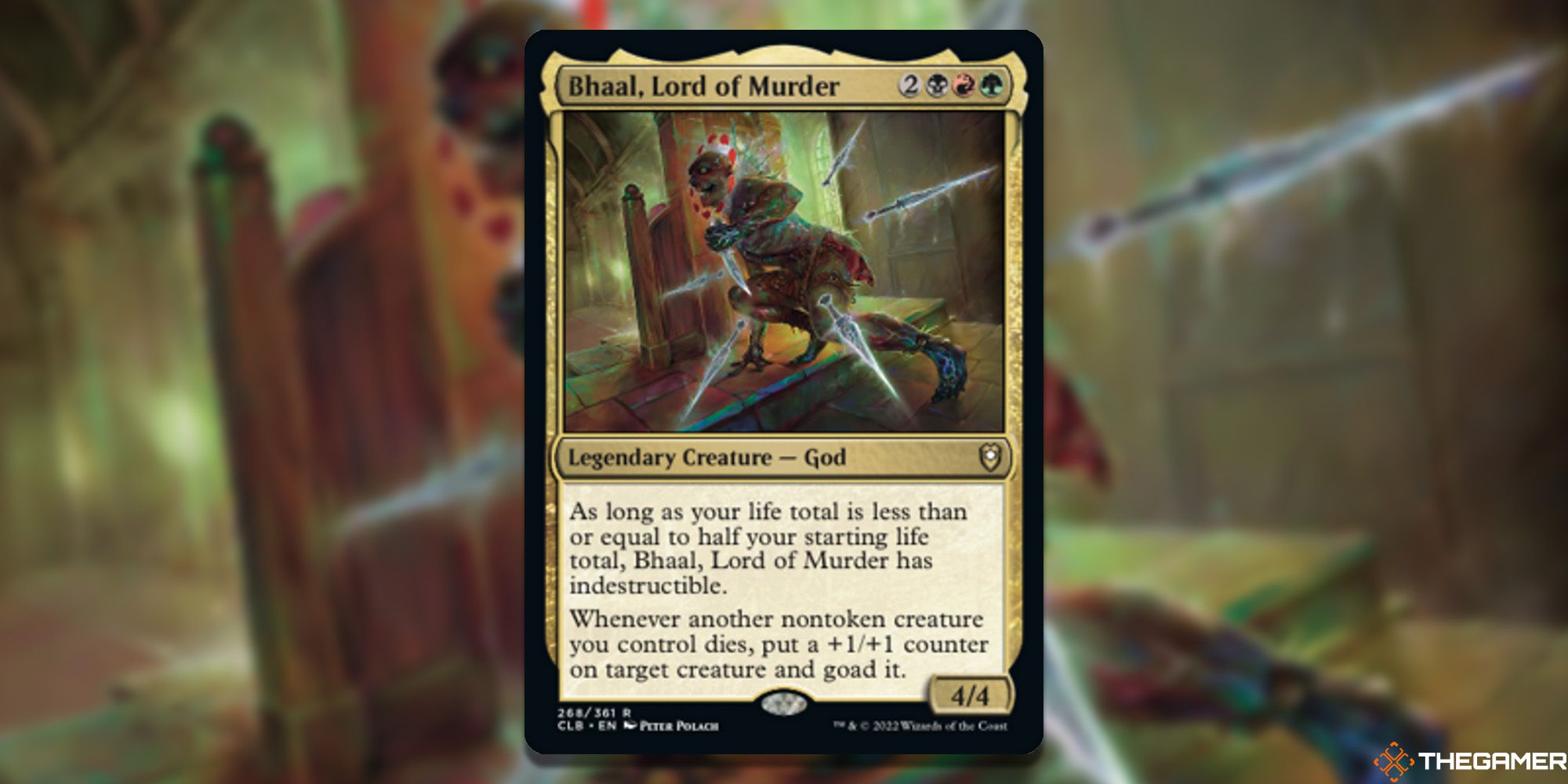 In Dungeons & Dragons, the Gods weren't born as such. In fact, they first existed as mere mortals who adventured together during their mortal lives. Over the course of their adventures, the three mortals eventually destroyed one of the Seven Lost Gods, taking in some of the Lost God's divine power in the process.

Then, they ventured forth to Gray Waste and reached the Castle of Bone. There, they fought off hordes of undead minions and eventually stood triumphant before the bone throne of the God Jergal. To the three adventurers' surprise, Jergal had served in his duties for millenia, and gladly stepped down from his throne.

Jergal offered his godhood to one among them. However, as the three then argued to no end over who would take the throne and ascend to godhood, Jergal eventually split his godly portfolio so that each of them might reach apotheosis.

Jergal's portfolio was split over a game of knucklebones. Bhaal finished third in the game of chance. As such, he was the last to choose what domains of godhood to receive. Bhaal went with murder, thinking that its power would allow him to both defeat Bane's minions and starve Myrkul's kingdom by staying his hand. Bhaal's power over murder is well-represented mechanically by both of the abilities on his card. If your life total is less than half your starting life total, the god has indestructible.

In other words, the closer to death you are, the more powerful Bhaal becomes. Secondly, whenever a nontoken creature dies, Bhaal is able to put a blessing of murder on another creature by giving it a counter. Of course, this blessing also comes with the urge to murder again, as is displayed by the goad mechanic, which forces a creature to attack. 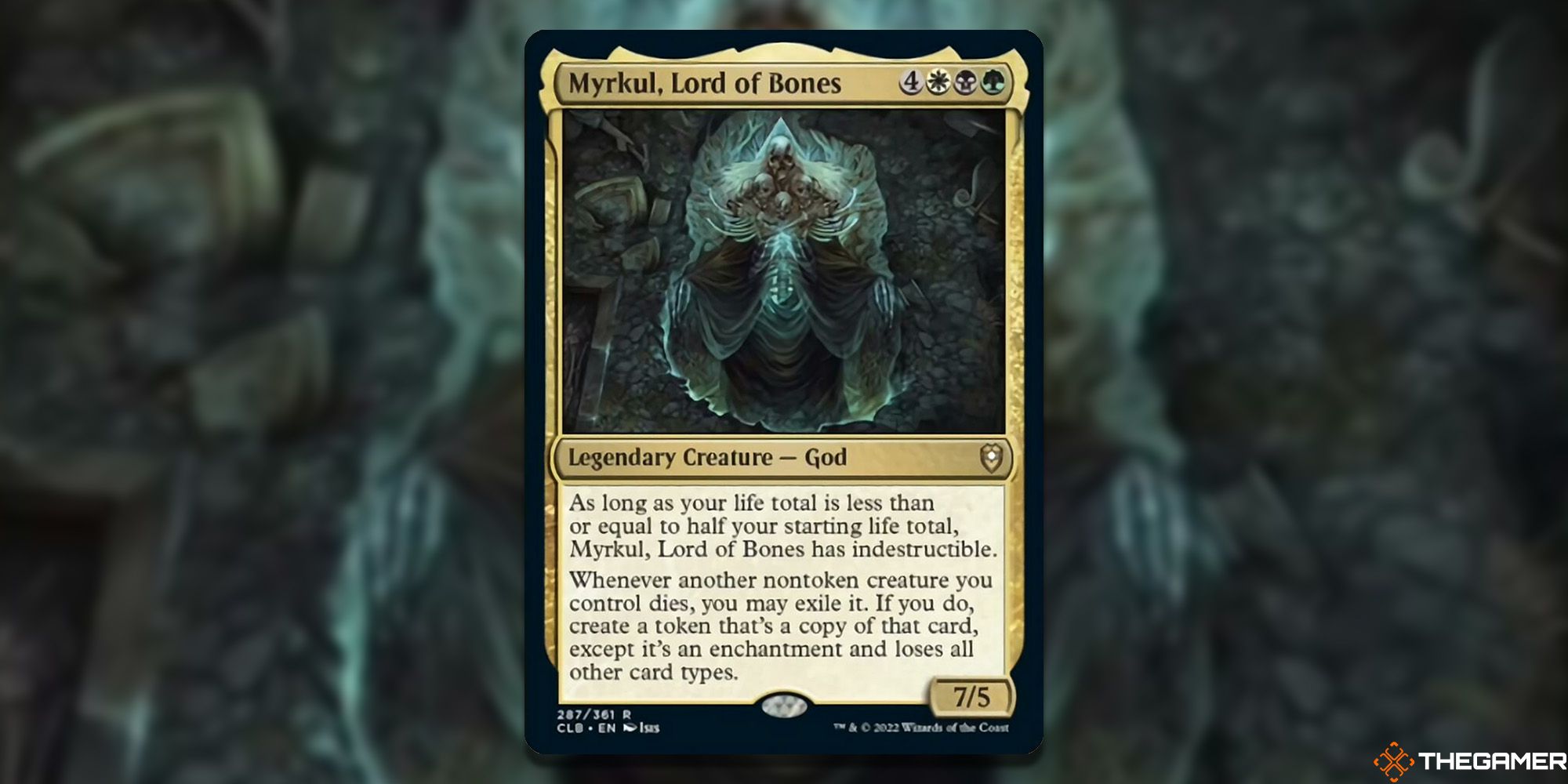 During his mortal life, Myrkul Bey al-Kursi was a crown prince as well as a powerful necromancer. As such, it only makes sense that, in his ascension to godhood, he became the Lord of the Dead. During his reign, Myrkul professed that death was something that all mortals should fear, as he preferred to always be on the fringes of mortal's minds.

To him, death was the incessant knocking at the back of one's skull, and that the fate of all mortals would inevitably lead them to his domain. Unlike worshippers of many deities, worship of Myrkul was something mostly done in secret; there were no common gatherings for religious ceremonies in his name.

Rather, those whose work was close to death such as undertakers, necromancers, and intelligent undead themselves would pay homage to the Lord of Bones in a more solitary manner. After all, death is a journey we all must go on alone.

Myrkul's card mechanics mirror his portfolio over death in much the same way that Bhaal's do for murder. He also shares the ability to become indestructible when his controller is closer to death than life, which makes even more sense for the god of death. Additionally, whenever a nontoken creature dies under your control, you create an enchantment token that's a copy of the creature, except loses all card types and becomes an enchantment instead.

This mechanic is an inventive way to represent the passing of a creature to the underworld. The token left behind is no longer living as it's no longer a creature, but its spirit yet remains under the control of the Lord of Bones as is represented by the token's enchantment card type. 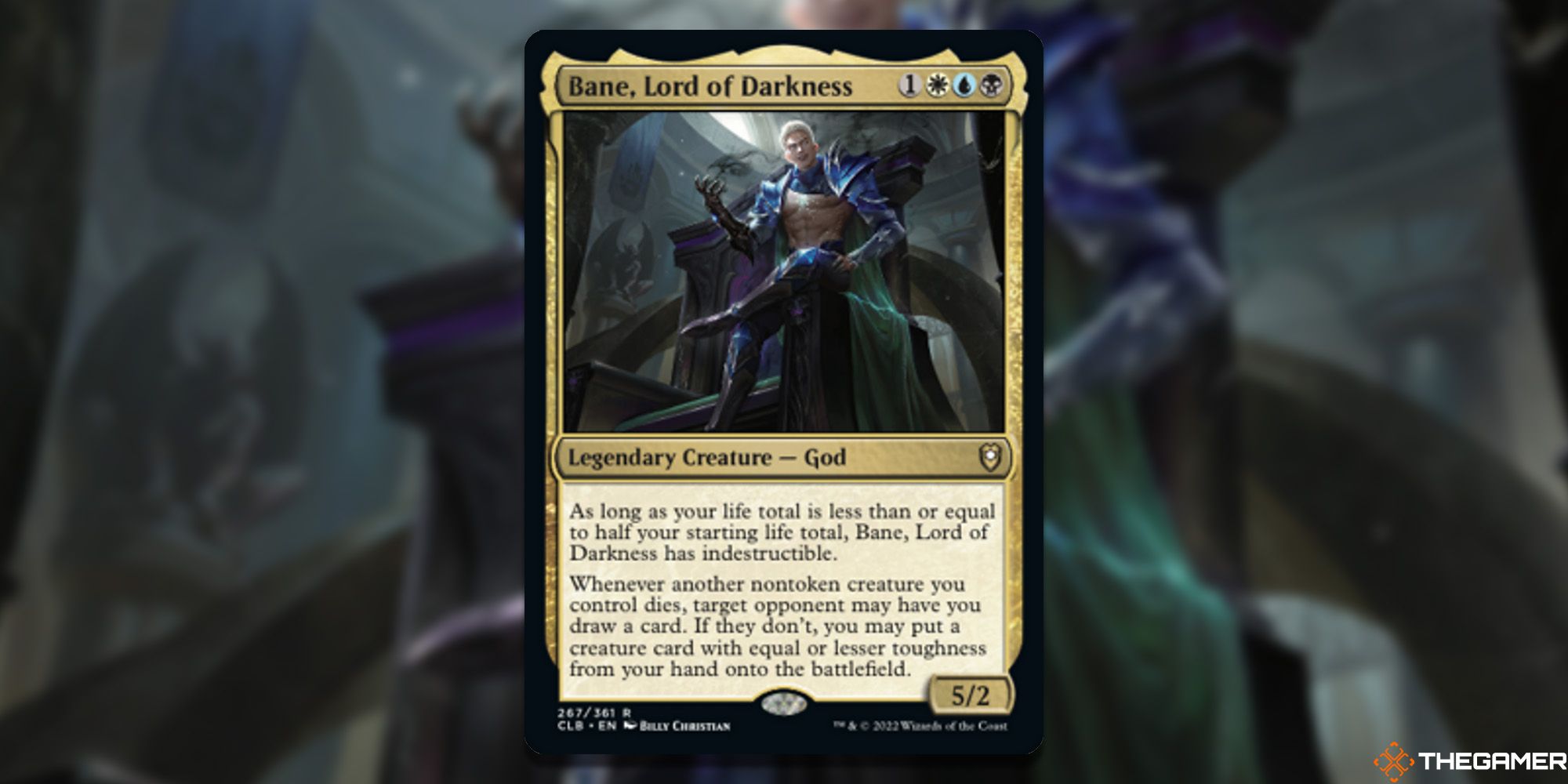 Bane was the winner of the game of knucklebones the three played to determine how Jergal's portfolio would be split. As a result, he was the first to choose his domains. Without hesitiation, he chose to rule for eternity as the ultimate tyrant, becoming the God of tyranny, hate, and oppression, better known as the Lord of Darkness.

Using the powers of his new godhood, Bane planned to rule over all of the Material Plane. Unfortunately for him, he had to contend with just about every other god in existence. In order to further his plans of tyrannical domination, Bane eventually came up with a plan to steal the Tablet of Fates from the overgod Ao.

Along with the help of Myrkul, Bane succeeded in stealing the tablets. However, this only led to Ao casting all of the gods down from the realms of divinity, forcing them to become mortal and walk upon the Material Plane as an act of humility.

During this event, known as the Time of Troubles, Bane was actually slain by the god Torm, whom guarded the celestial stairwell that led back to the gods' divinity. However, Bane had planned for this setback through the birth of his son whom he had given a small amount of his divine power.

Years later, his son was pressed into a ritual that ended with the reincarnated Bane bursting forth from the godly essence left inside of him, killing his son in the process. Bane, Myrkul, and Bhaal would all die during the Time of Troubles, earning the group the nickname the Dead Three.

However, the others had also laid plans to be resurrected in one way or another as Bane did. Presently, all three of them remain as quasi-deities who are effectively mortal, yet retain great powers from their previous divinity.

This is perhaps the best explanation as to why each of the gods' cards feature the mechanic that gives them indestructible the closer their controller is to death. Bane's card also allows you to draw a card each time a nontoken creature dies. Alternatively, your opponent can choose to not have you draw a card, but instead allow you to place a creature with equal or lesser mana value to the one that died from your hand onto the battlefield.

This mechanic is a great representation of Bane's own resurrection through the grisly sacrifice of his son. Bane's card draw ability represents his always being one step ahead of his rival gods, and the ability to play a creature from your hand is a reflection of Bane's return. Death is all part of the plan.