Same as reality, the Rats of Magic: The Gathering are the tiny beasts we associate most with swarms and plagues. The king of vermin, they are responsible for not only spreading disease but causing many extinctions in the avian and reptile world. They are nearly impossible to contain and highly intelligent, featuring physiological and neural capacities similar to humans.

Despite all of this, they make for great pets — especially for the MTG Commander player! In the realms of strategy, the Rat creature type swarms tokens onto the battlefield, attack with menace or fear, discard cards, and even reduce hand sizes. Rat commanders feature graveyard synergies and mass attacks that will leave your opponents as nothing more than a pile of bones. Oh, and some are ninjas too!

6/6 Patron Of The Nezumi 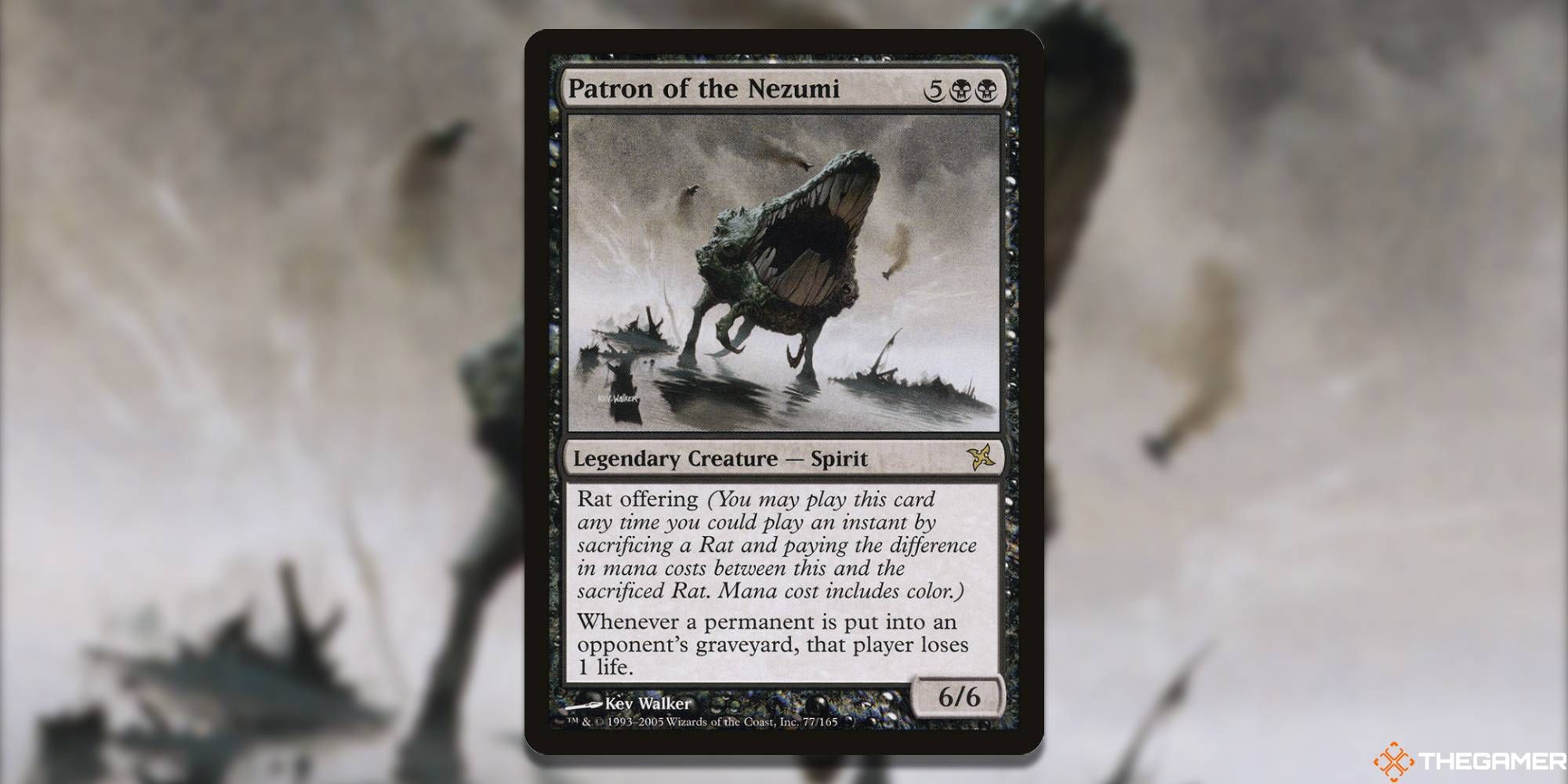 Patron of the Nezumi is not a Rat creature type themselves — they are the God the Rats pray to. Thus, this Legendary Spirit creature can flash onto the battlefield with a sacrifice. Any opposing permanents you can destroy, sacrifice, or otherwise consume with your Rat horde will continuously ping players for one damage each.

Needless to say, that kind of damage can add up over time. Steeply costed at seven mana, Patron of the Nezumi needs heavy black mana production and non-token Rats to offer up. Protect the Patron and build up an army for communal sacrifice. This commander and the legendary dementia caster and permanent-sacrificer Braids make for a great duo (that goes for all Rat commanders, in fact). 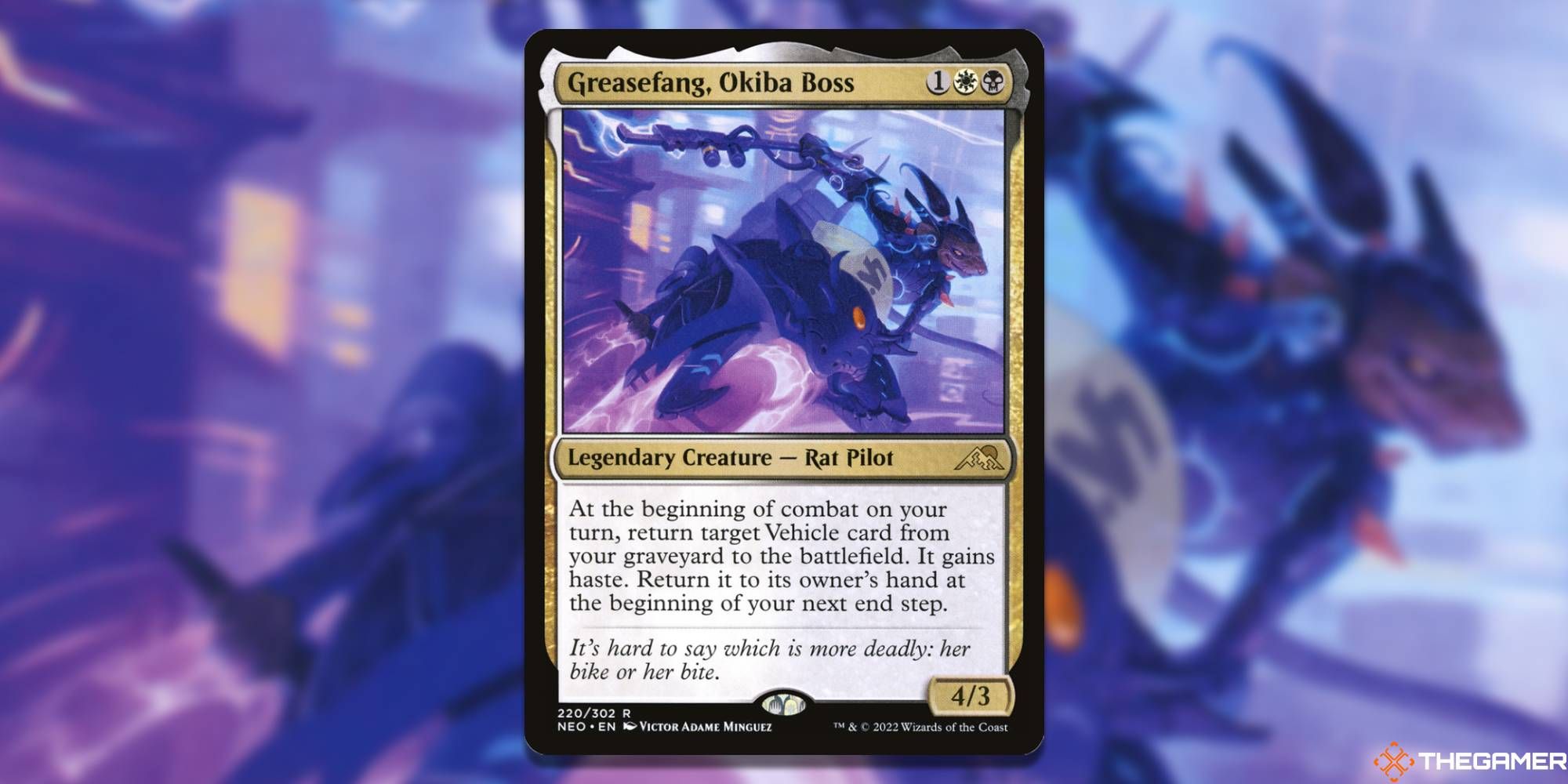 Greasefang, Okiba Boss is your resident Rat Pilot, a neon energy biker perfect for an Orzhov (white and black) Vehicle deck. Create your Rat biker gang with heavy duty ships to crew, such as High-Speed Hoverbike, Smuggler’s Copter, Surgehacker Mech, Necron Monolith, and even the Vehicle mothership that is Parhelion II. Greasefang can retrieve them all from the graveyard when they end up there, by destruction or mill.

Rats are perfect for Vehicles because the major drawback of the latter is the constant need for creatures to tap and animate them into combat, on attack or defense. Your Rats can provide the crew costs to send off your fleet each combat. Pair Greasefang with Peacewalker Colossus and make your peace by wiping everyone else out. 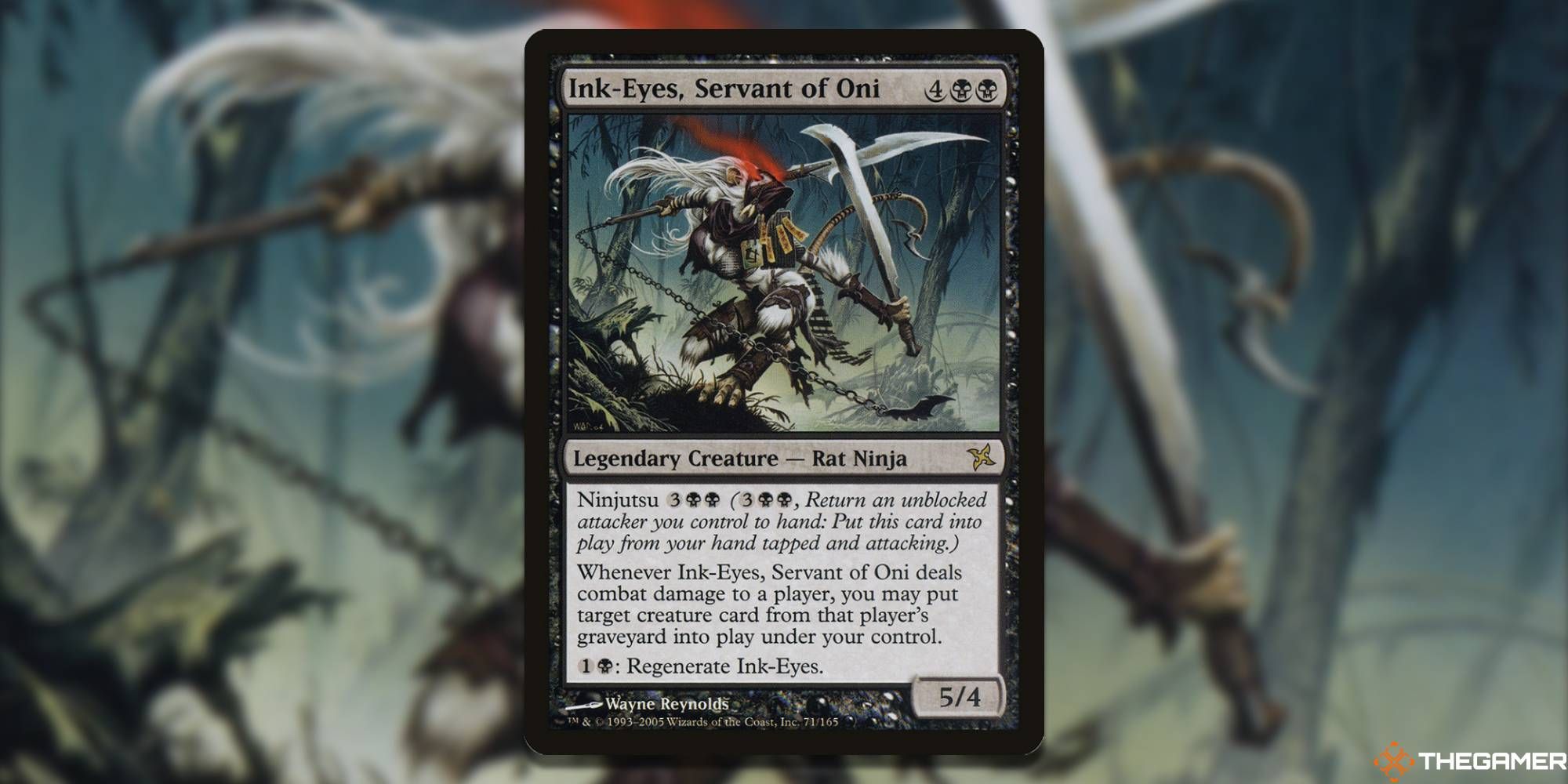 The original Kamigawa sets from 2004-2005 launched many Rats and Ninja into the game of Magic. And Ink-Eyes, Servant of Oni, the legendary Rat Ninja that favors graveyard recursion, is thus one of the most important creatures of the type ever printed. Wayne Reynolds expressive art showcases a duel-wielding killer beast with smoky red eyes, hungry for unlife.

She's destined for a ninjutsu deck that can get your opponent’s bruisers into the graveyard. Ink-Eyes can even protect herself through regeneration and provides a hefty five power. Surround Ink-Eyes with discard effects to fill graveyards, and then deploy lieutenants like Ogre Slumlord and Piper of the Swarm to unlock your Rat shinobi assault. 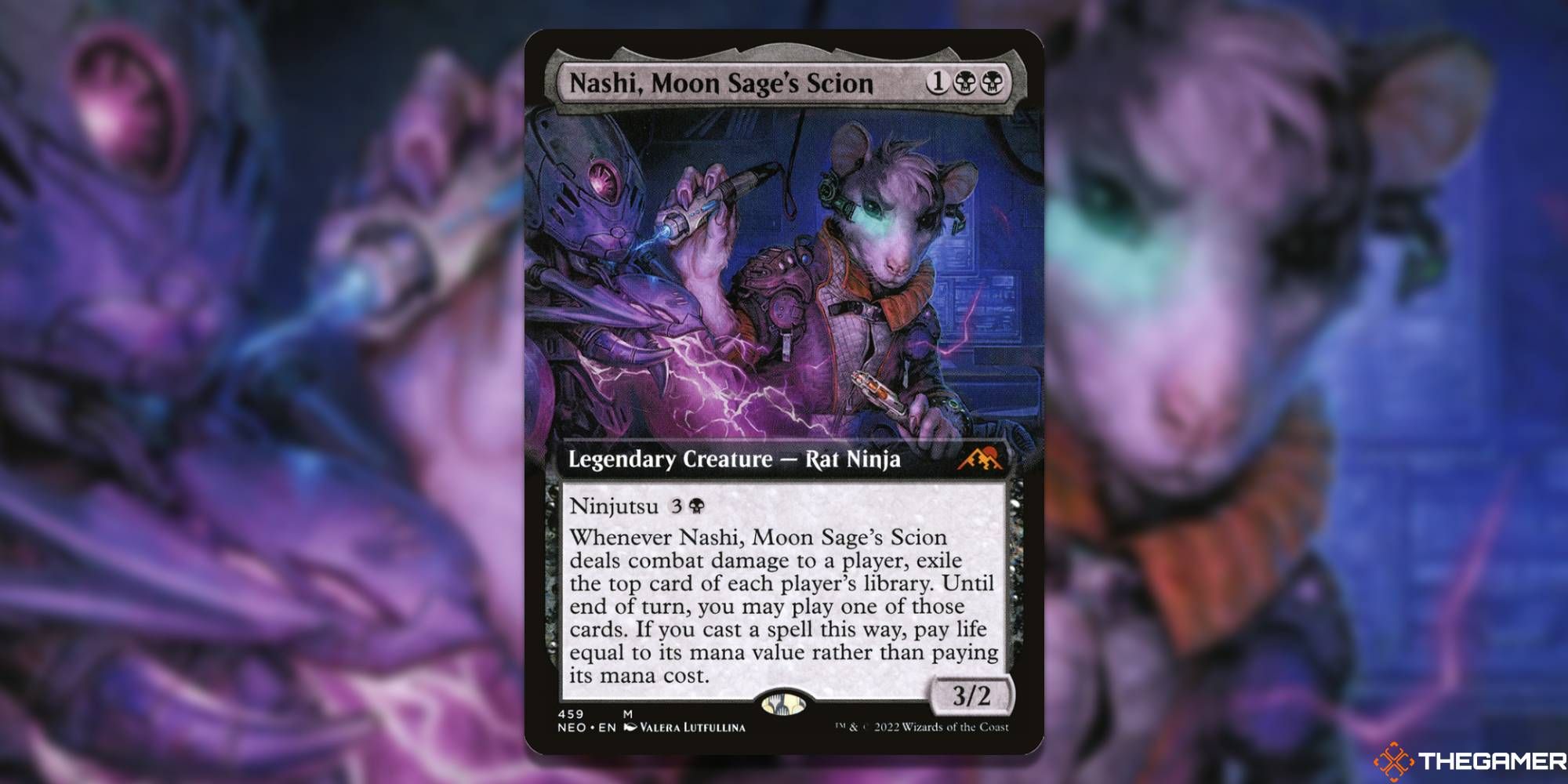 Nashi, Moon Mage’s Scion is a Mono Black Control player’s dream. Make the wicked electro tinkerer unblockable with Whispersilk Cloak or Rogue’s Passage and prepare to cast your favorite spell off the top of any player’s deck, paid in blood. This hi-tech Rat Ninja uses life to steal effects right out from underneath your opposition.

Pitch perfect synergy exists between Nashi and cards like Scheming Symmetry, Varragoth, Bloodsky Sire, and the wretchedly terrifying Brainstealer Dragon. Utilize the drawback of paying life by deploying enchantments like Exquisite Blood and Font of Agonies. The legendary Demon — Vilis, Broker of Blood — can go meteoric with nigh unstoppable card advantage from every top-of-deck cast. Just don’t forget your Loxodon Warhammer, Whip of Erebos, and other life gain effects before you embark on Nashi’s bloody quest to steal the show at your Commander table.

2/6 Ashcoat Of The Shadow Swarm 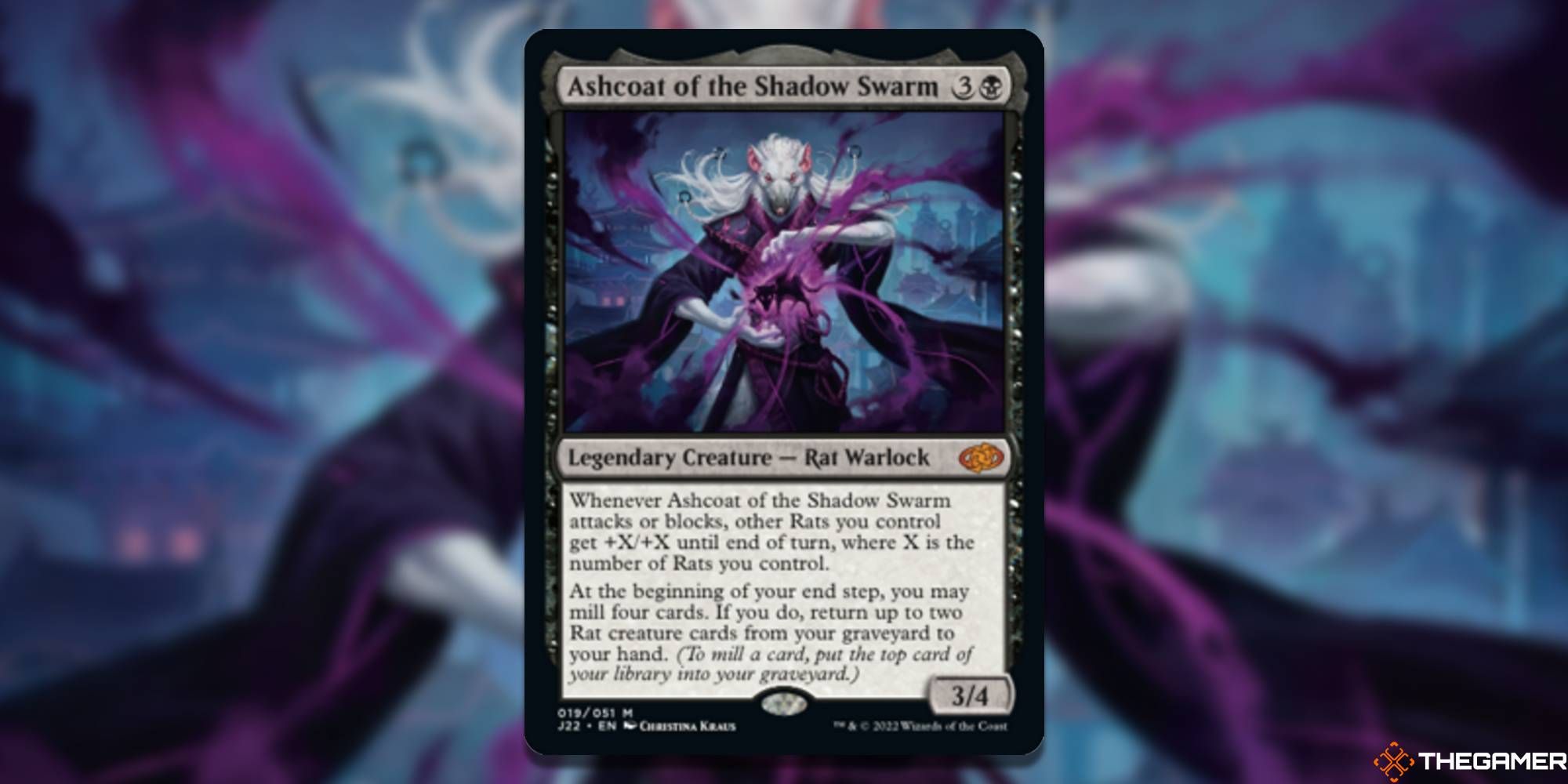 Ashcoat of the Shadow Swarm is a Rat from Jumpstart 2022. This Legendary Rat Warlock appears to have unlocked the full power of the Rat! He immediately makes his mark as one of the top choices for a tribal Rat commander deck. Every time Ashcoat attacks or blocks, he empowers every other Rat you control with +X/+X equal to the Rats you control. If left unchecked, this vermin-based mini-Craterhoof won’t even take that many Rats to win you the game.

The strategy is pretty simple: make as many Rats as you can and get into the red zone with attacks from all of them. However, Ashcoat will eventually need evasion in the form of fear, menace, or unblockability to survive such attacks (he does not gain the boost himself). Additionally, Ashcoat’s other mill ability enables access to black’s many graveyard returns, or metallic food for Trazyn the Infinite to use. 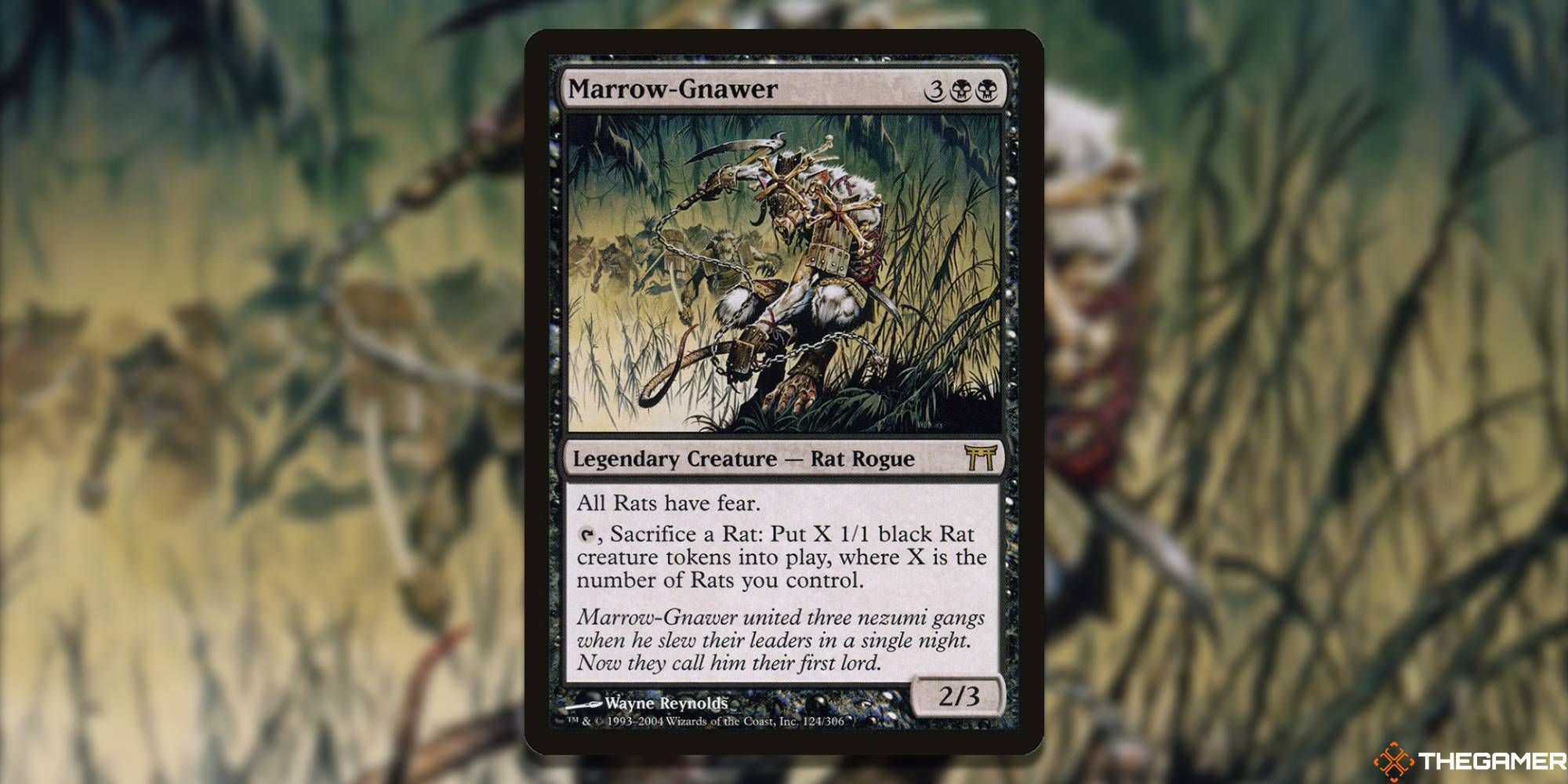 Another artistic masterpiece from Wayne Reynolds reveals one of the hardest Rats with one of the best names: Marrow-Gnawer. It doesn’t get any more visceral than that and sounds like something straight out of a Stephen King novel. Marrow-Gnawer united the Rat clans in Kamigawa lore by slaying all his opposition in a single night. Now he wants to do the same in your Commander pod.

This Rat Rogue gives all your Rats the perfect tribal bonuses: fear (which can’t be blocked except by black or artifact creatures) and the ability to double the swarm with a single sacrifice. Focus on the mass production of Rats and Marrow-Gnawer will be able to do the rest. Coat of Arms and other tribal artifact augmentations can turn your Rats into world-ending monsters. Cards like Pack Rat and Species Specialist also provide incredible advantages for this commander. Now get out there and gnaw some marrow!