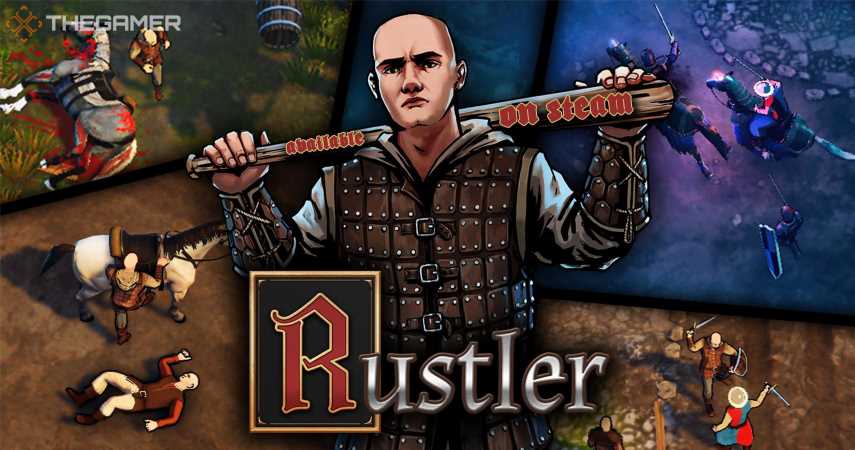 Polish developer Jutsu Games has finally released a medieval GTA called Rustler in Early Access on Steam. The game was funded on Kickstarter just in two weeks in 2020, and since then the team has worked hard to bring players a sense of being a thug in a crazy open-world with many cheeky activities and even more pop-culture references.

Rustler is the GTA2-style open-world action game with a top-down perspective. The project aims to fulfill players’ desires to cause chaos not only in modern settings, as plenty of games suggest, but in medieval times too. Rustler is currently available on Steam with 15% discount for a limited time and there is a brand-new release trailer to admire all its features. During its Kickstarter campaign, the game attracted thousands of people to contribute 152% of the planned goal, causing developers to further improve Rustler with additional content. However, there is a long road ahead for the game to be fully released.

Now is the time to experience the life of a bald thug named simply The Guy in a historically inaccurate medieval sandbox, filled with feudal injustice and witch-hunting, all spiced up with Monty Python sense of humor. Rustler offers some neat activities, like killing and robbing peasants and lords around, but that’s far from the full scope. Players will be able to steal horses while listening to bard music, drifting a cart, causing havoc everywhere, dig up dinosaur skeletons, shoot cows into the sky with a trebuchet, and even join the Round-Earthers sect. And there is a story-mode with some twisted quests too!

Of course, the team sets foot on the crowded medieval genre today, but as it seems Rustler possesses enough of its own distinctive elements to go unrecognized by Steam audiences. Fans of more serious projects can look upon the upcoming Chivalry 2 release from Torn Banner Studios, slated just for June 2021. This historically accurate first-person slasher will bring the players on the battlefield for some epic-scale showdown.

Developers Jutsu Games did not clarify when the full version of Rustler is coming on PC. But there is really no point to wait, as this humorous Grand Theft Horse already can bring a lot of pleasant memories from your last GTA2 play session.