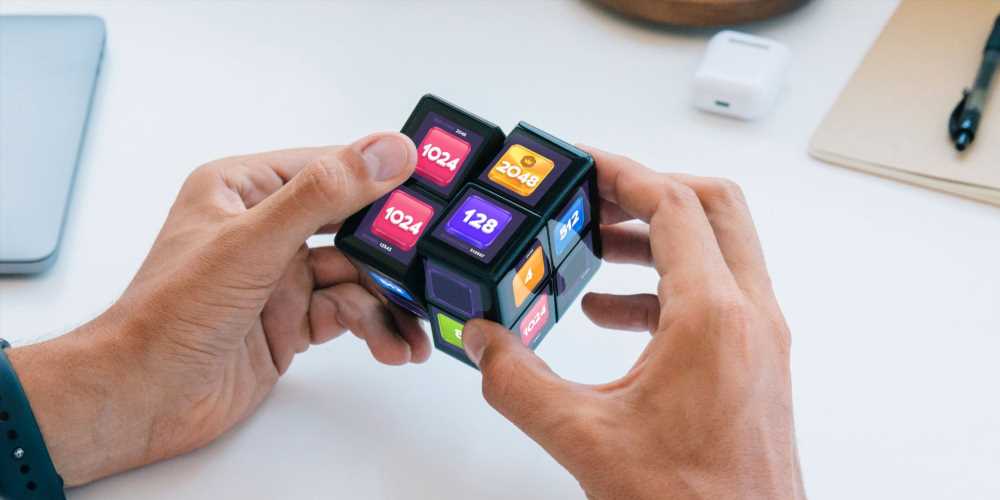 Picture a Rubik’s Cube made of glass. It’s about twice as heavy as a normal one, and it only has four tiles on each side instead of nine. When you twist it, the screens on each of the 24 tiles spring to life, revealing a suite of three-dimensional games and apps that are controlled with only a few simple gestures – tapping, shaking, tilting, and twisting. As intuitive as it is puzzling, the WOWcube is a curious piece of technology that its creator hopes will have far reaching applications, from gaming to productivity, to early child development and STEM.

It may sound simple, but the technology powering the WOWCube is anything but. As CubiOS’ CEO Max Filin explained to me over Zoom last week, it isn’t possible to build a device with a single, centralized CPU that can twist and turn the way WOWCube does. Instead, the cube is made up of eight individual modules, each with their own CPUs, batteries, and screens, that connect together with 144 neodymium magnetic balls, 96 of which continuously share low voltage data between the modules. This is the real mechanical marvel of the WOWcube, which Filin demonstrates by disassembling a cube in front of me.

First, he launches one of WOWCubes easier to understand games, called Playball, in which you use the cube’s internal gyro to roll a ball around until it lands in a hole. Filin then took the cube apart and reattached the magnetic modules in a random order, and miraculously, the tiny ball was able to pass back and forth across each screen. I barely understand how the technology works, but my mind was instantly blown wide open to all the possible uses for these tiny, interactive computers. Filin describes his vision for a board game that uses each module as the playing pieces, which can be attached together and pulled apart to make units fight or interact.

Whatever this technology may eventually become, for now, CubiOS is focused on the WOWCube. The first thing you notice when you get your hands on the WOWCube is how incredible it feels to twist. Every turn involves disconnecting and reconnecting dozens of tiny magnetics, which gives each twist a nice chunky haptic experience that snaps into position. You can flip and twist the cube quickly and it always feels precise. This is something Filin says was an important part of the design, just as it was to Ernő Rubik when designing his cube. Filin says it took about ten different prototypes to nail the tactile feeling he wanted. It’s something you have to experience for yourself to understand, but sometimes I like to twist the cube around like a fidget toy without ever launching any of the games.

But the games are what WOWCube is all about. What’s remarkable is how intuitive they are to play, despite how uniquely weird the mechanics of control are. Most of them can be played without any tutorials at all. Though simple to understand, they’re often difficult to complete as your mind adjusts to thinking about two-dimensional objects on a three-dimensional, cube-shaped field.

One of my favorites is Ladybug, in which you’re tasked to guide a ladybug along a path to eat berries. The ladybug walks automatically along the path, but if it hits a dead end, it’s game over. Your job is to find ways to reposition each segment of the path by twisting the cube so that the ladybug never runs out of road. It’s easy to lose track of the constantly moving ladybug as you twist the cube around in your hands looking for ways to make new paths, and it’s a perfect demonstration of the way the WOWCube turns simple concepts into engaging, complex tasks.

There’s a lot of games available on the WOWCube already, including cubed versions of 2048, Cut the Rope, and Space Invaders, but Filin was quick to point out that most games were made by software and hardware developers at CubiOS, not game developers. Until recently, CubiOS had no professional game designer on the team. Bonbon, a variation of 2048 that trades numbers for colorful candies, was created by Filin’s eight year old daughter. One of the productivity apps, a simple timer, was designed by someone that works in HR. Filin sees WOWCube as a platform that amateur and professional developers can work within, and providing the SDK to people will lead to games and apps beyond what even his team could have imagined. “You cannot believe how many requests we have,” Filin says, “[of people saying] I want to make a game for you.”

Beyond games, the WOWCube has a ton of potential as a smart device, a productivity tool, and perhaps even medical applications, like helping people suffering from traumatic brain injuries recover. There’s a widget app, customizable from an iOS device via bluetooth, that uses the 24 panels to relay information, like the weather, phone notifications, moon phases, and stock prices. Filin says it will be able to link with your social media accounts so it can display pictures of your family, or connect to a phone to be used as a bluetooth speaker. He’s got more applications in mind, like Google Streetview’s panoramic images stretched over the faces of the cube, or esports athletes checking their WOWCubes for their match times and rulesets during a tournament. Filin makes the possibilities for WOWCube seem infinite. 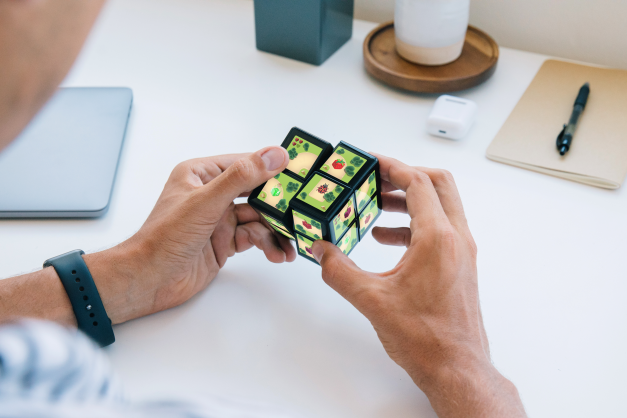 The version of the WOWCUbe I’ve been hands-on with this month is an in-development model. When it ships to customers later this year (pre-order are available now at a hefty 40% discount) it will be twice as bright, 11.5x louder, and charge more reliably – though I personally haven’t had any charging issues, beyond the fragility of the fins that need to slide between the modules when docking it. It’s a fairly heavy device, and the battery only lasts for about an hour, but Filin says future iterations, including one that replaces the glass panels with plastic ones, should improve it.

As a novelty, there’s a lot to love about this weird little cube. Its brain-teaser games are great for a short distraction, and younger kids will love twisting and turning it, but the efficacy of the WOWCube as a platform will come down to the kind of support it gets from innovative developers. The tech is remarkable and full of potential, and I’m excited to see what the game developers and app makers decide to do with it.

Devkits are available by request, and you can sign up to pre-order as well. You can learn more about the WOWCube on the official website, or on CubiOS’ Start Engine page, where it is still taking on new investors for the project.