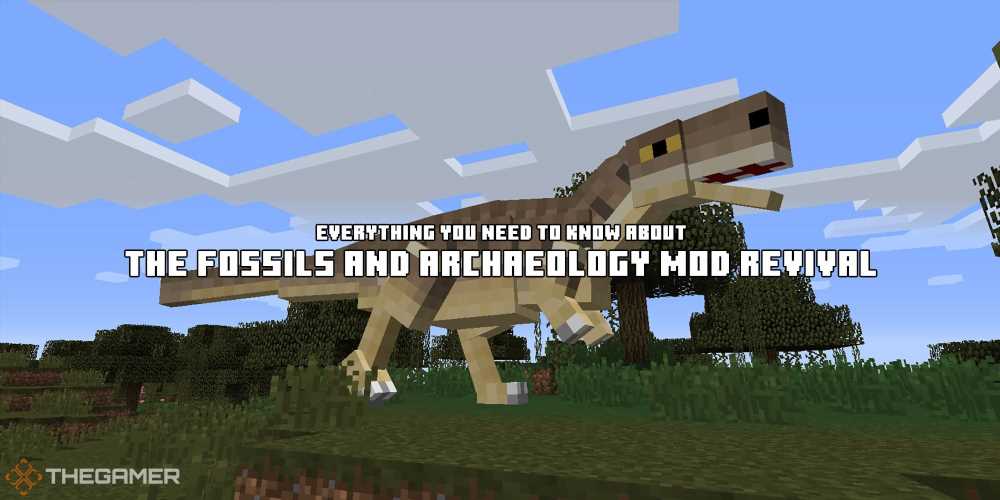 With over 2.7 million downloads, the Fossils and Archeology Mod Revival is one of Minecraft’s most beloved mods and it’s not difficult to see why. While most mods introduce a few simple features, this project aimed to bring a whole swathe of prehistoric beasts to the game, as well as new biomes and fossil-based features.

Its huge fandom is also owed in part to its seniority. Originally the mod was released over 10 years ago by Flammarilva and Team July, but upon going open source it has seen dedicated support over much of the last decade by an entirely new group of modders who sought to see the mod reach its true potential. Over the years they’ve added a great deal of content that makes this release stand out from others due to its stunning attention to detail.

7 It All Starts With Fossils 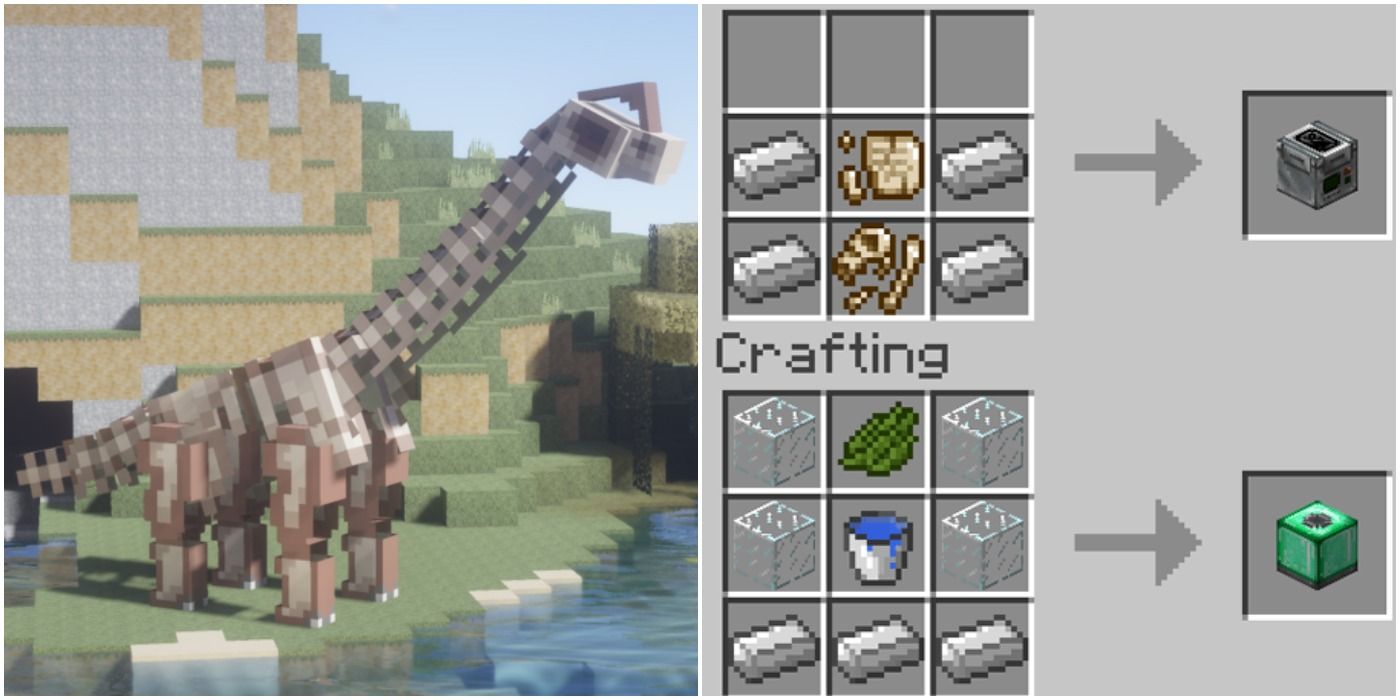 Apart from a few living fossils that naturally spawn, such as Coelacanth, you won’t find any extinct dinosaurs and beasts roaming around when you load up this mob. Instead, you need to get to work mining fossil blocks before later unleashing your inner scientist. These blocks drop a big variety of materials but the ones you’re initially going to be after are bio-fossils, which have a 22.5% drop rate.

The next step will then be building an “Analyzer” to search your bio-fossils for DNA. With this comes a lot of suspense as the DNA is randomized and you can’t predict what will be produced. The best thing is to have plenty of stock beforehand, so you can have a variety of DNA to play around with and prioritize.

Finally, you’ll need the all-important “Culture Vat” to create embryos and eggs from the harvested DNA. Inside the Culture Vat also goes the rather questionably named “Bio-Goo” which is the main agent of the cultivation process. Of course, this is a complicated science with no guarantee of success, but before long you’ll hopefully have the early stages of some prehistoric life in your hands and not the zombie-like failuresaurus… 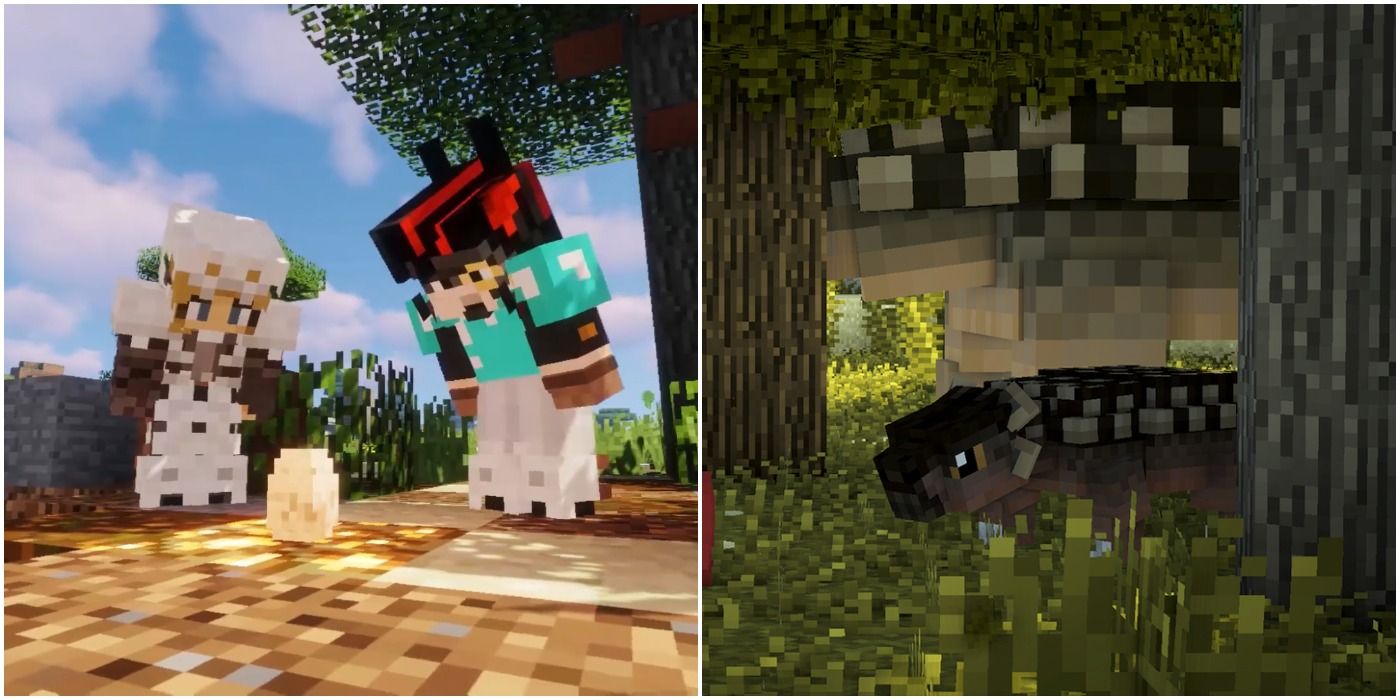 Once you’ve got all the hardcore genetic science work out of the way, you can start hatching your dinosaurs! While they all take 100 seconds to hatch, conditions can delay or interrupt this entirely. Many will need to be placed on dry land during the daytime, for instance, but this isn’t always the case.

Also, make sure to provide the eggs with adequate spacing, or else you might be presented with an error message once the countdown is over. This isn’t game over though, just move it elsewhere and it’ll pop out in no time. Just keep this in mind if you want to keep them within enclosures instead of having dinosaurs running amock.

5 Use The Dinopedia As A Guide 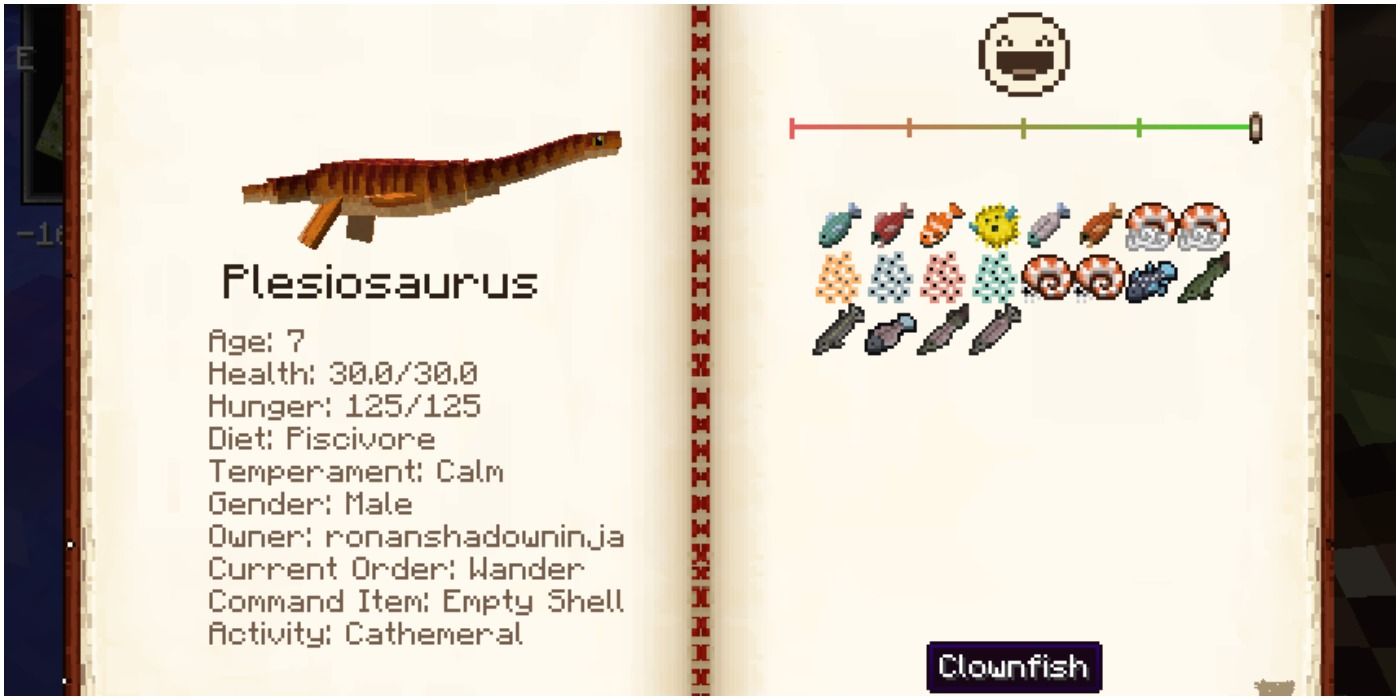 The Dinopedia is your best ally in learning everything about the prehistoric beasts and how to avoid disaster. It’s easily crafted by just combining a book and a single bio-fossil.

Once materialized, right-clicking on things from the DLC will reveal vital information about them. Primarily it offers a care guide, but also includes detailed lore that’s true to real-life dinosaur science, unlike the more cartoonish Jurassic World DLC.

The Dinopedia can also be used to learn a lot about individual dinosaurs and their stats. By using it you can find details about their age, gender, happiness, diet, taming status, health, and current mood. So if in doubt, whip the book out… it’s even pretty useful in the previous step. 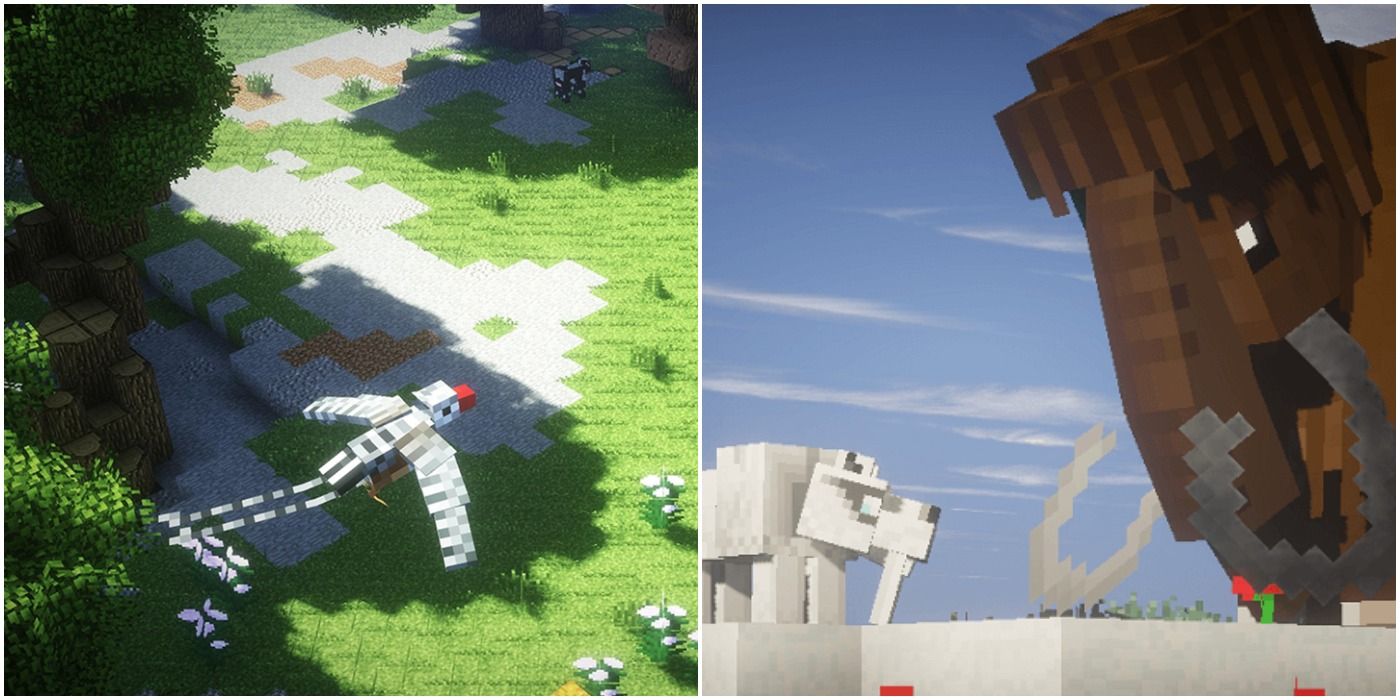 While dinosaurs will be the main attraction for many, this mod set out to feature all sorts of prehistoric beasts and not just fan favorites. There are actually over forty different species! These are then all divided up into three different categories, which you can learn through checking their DNA color: orange = Mesozoic (dinosaur era), blue = Cenozoic (after dinosaurs), and green = Paleozoic (before dinosaurs).

Soon it won’t be just your average dinosaurs roaming the land, but giant mammals like mammoths and huge insects from when the Earth was oxygen-rich. Then up above pterodactyls will dominate the skies, while fearsome sea beasts will lurk way below in the watery depths.

Many of these are sourced and produced in a whole different way to dinosaurs, however. Cenozoic fossils, for instance, can only be found by analyzing frozen meat found in permablocks and tar drops. Once you’ve made something of their DNA, mammal embryos will need to be injected into appropriate hosts like cows, which while then later give birth to them. Bird eggs, however, are simply thrown at the ground like with chickens. 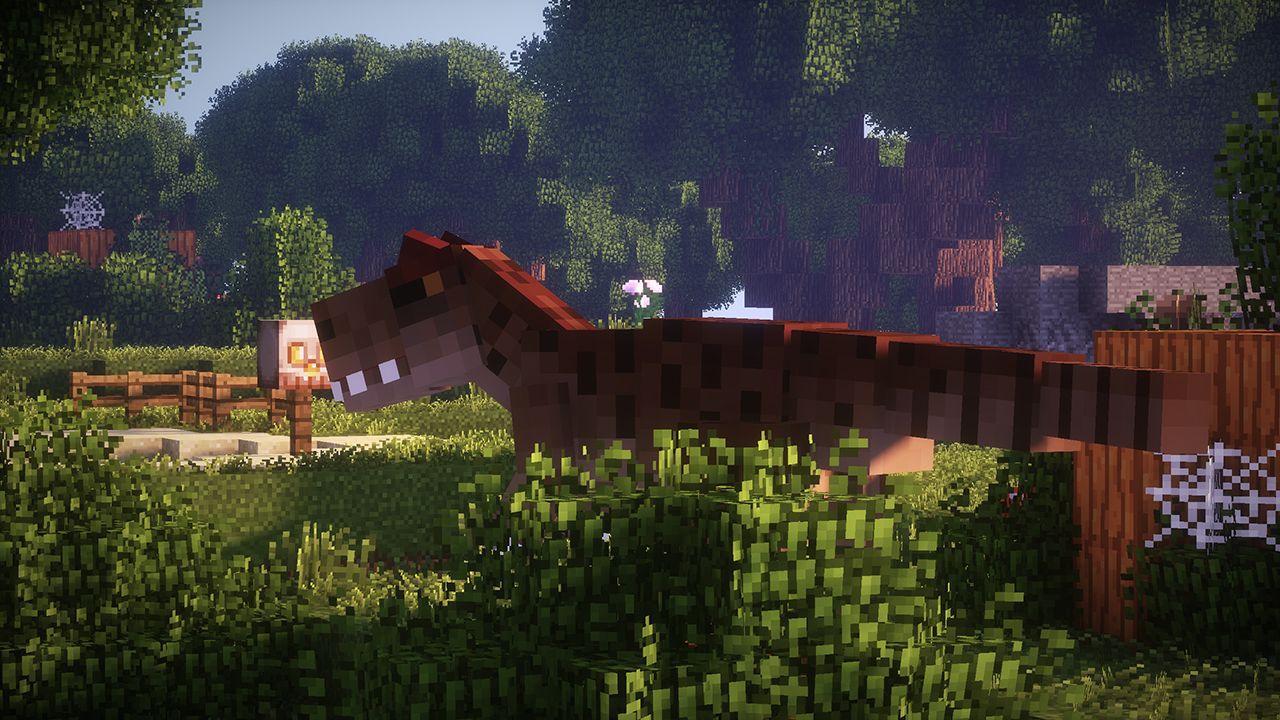 To the delight of everyone, nearly every creature in this mod is tameable with the exception of fish, quagga, and nautilus. Most can be tamed with just a simple whip, which is crafted like a fishing rod, but with the top stick replaced by string. This is then used by right-clicking the mobs, which lowers their moods until they’re tamed. It’s rather a sad way to do it, but I’m sure you can make it up to your dino friend afterward.

Once tamed an additional right-click with the whip will allow you to live out your wildest fantasy of riding dinosaurs. Movement then works like normal, though you need to keep the whip equipped at all times. A few of the more menacing beasties will need more than a simple whip to be tamed, though. You’ll need a Scarab Gem for the Tyrannosaurs Rex and Allosaurs, and an Aquatic Scarab Gem for Mosasaurs and Spinosaurus. These are the mod’s two rarest items, however, so use them wisely.

One other thing you can do is completely halt the growth of any dinosaur, to keep them young and cute. To do this you’ll need to feed them Poisonous Potato Essence. Just try to think of it as like an Everstone from Pokémon that stops them from evolving.

2 Hostile Mobs And A Final Boss 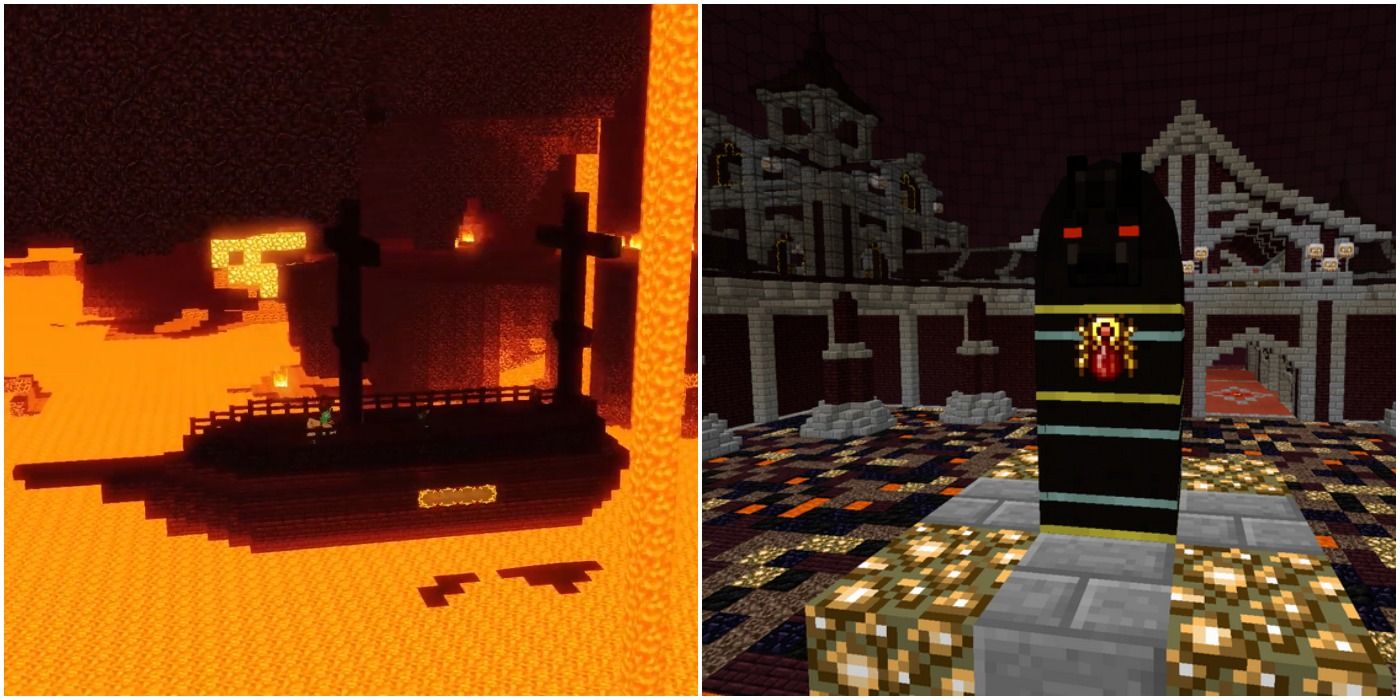 This mod also has a story of sorts which ends in a big boss battle against the ancient king Anu. To get there, you need to first be brave enough to venture into the nether and then find a Hell Boat floating out there in the lava. On it assemble four redstone and figures to open up a portal. Go through this and you’ll end up outside of Anu’s Castle.

This castle is no walk in the park. It’s defended by Sentry Pigmen and Anubite statues that explode into life, which you’ll need to battle your way through or carefully avoid. Finally, in the center, you can find Anu’s sarcophagus, which can only be opened with a Scarab Gem.

The ensuing boss battle then goes through three stages, each more dangerous than the last, before Anu is finally defeated. If you click on his corpse, you’ll reach the game’s final secret. By doing so you’ll be teleported to a mysterious room with a treasure test that teases one of the game’s most long-awaited updates… 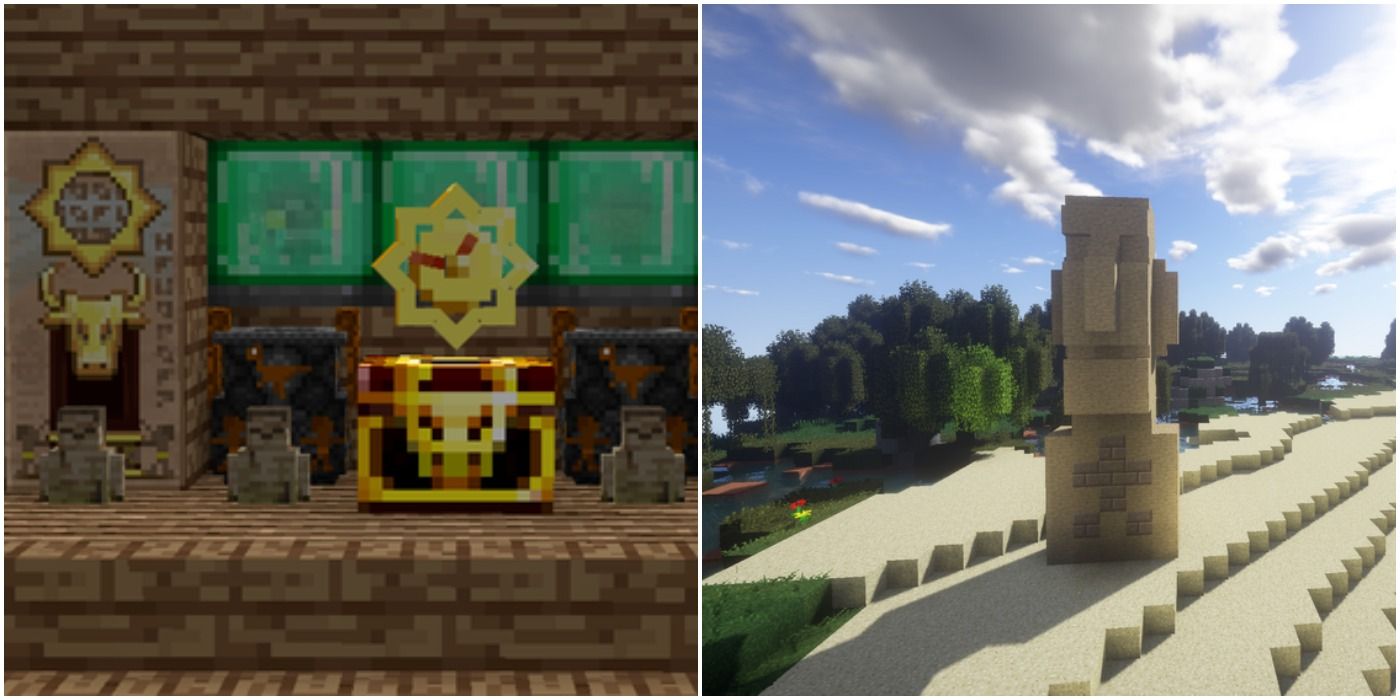 A lot of extra content is lined up for this mod, which is no surprise given its longevity. It’s most likely that the next update will bring more creatures and plants from the Paleozoic era before dinosaurs existed, due to the mod’s partnership with the Brymbo Fossil Forest project. You can also expect the fossil system itself to be reinvented, including the possibility to find full sets of fossilized skeletons.

The mod also wants to go beyond paleontology content and incorporate more archeology, with around ten ancient civilizations planned, which shall all come with their own unique biomes, as well as intricate paintings and treasures. This may not be so surprising given the mod’s name, but will likely take a long time to implement.

Finally, the addition teased after the game’s boss-fight is the Time-Machine. This will allow players to venture to a dimension where prehistoric beasts of all eras exist together, without any need to science them back into existence. Around 125 of them are planned to be in the mod by the time this one releases though, so be happy with a steady roll-out of mobs and other surprises until then!