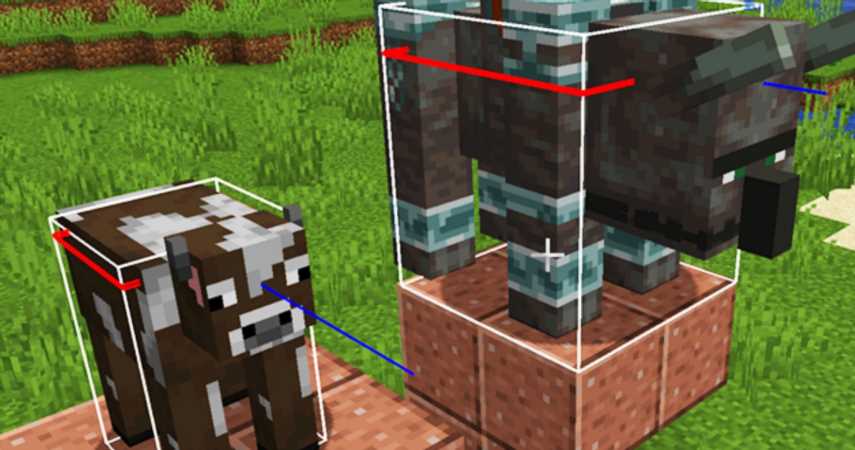 At times, Minecraft can feel like a very randomized game. However, the truth is that everything has a purpose and many of its mechanics simply remain hidden or misunderstood by players. Finding particular structures or mobs can be a challenge, but through speedrunning players have been able to learn quite a bit about the game.

The debug screen is a famous option in Minecraft which allows players to see more information about their world. Some players prefer not to use the debug screen due to how much it reveals about one’s surroundings, and since it can make finding some resources like diamonds significantly easier, it almost counts as cheating. However, the debug screen and some additional debug keybinds can be a tremendous help for players looking to be efficient.

The Debug Screen And Other Keybinds 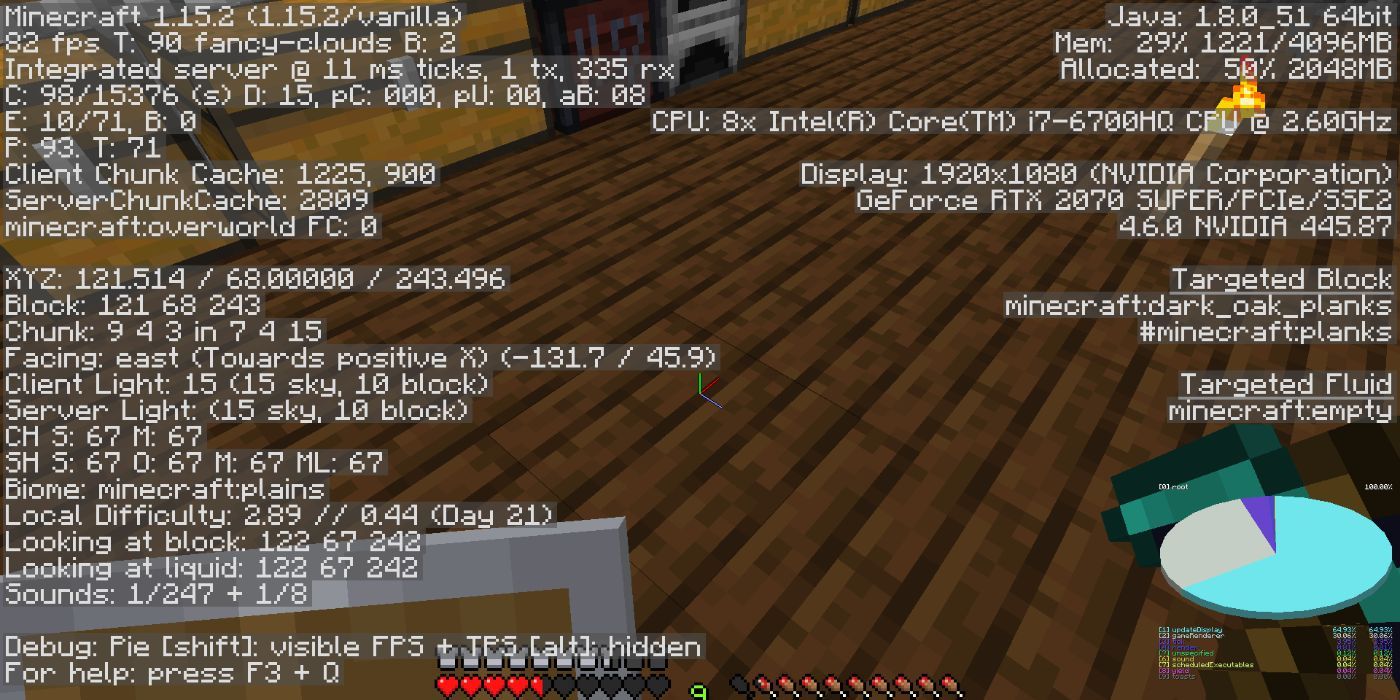 In order to open up the debug screen, you need to press F3 on your keyboard. This will bring up a whole bunch of information on both the top left and top right of your screen. If you’re playing on a modded server or a vanilla multiplayer server, there’s a chance the admin has disabled some information that would normally be shown in the debug screen, so it might be missing.

There’s a ton of basic information to be found on this screen, including your current Minecraft version, and even your CPU and GPU. On top of this debug screen, there are some additional F3 keybinds that come in handy. 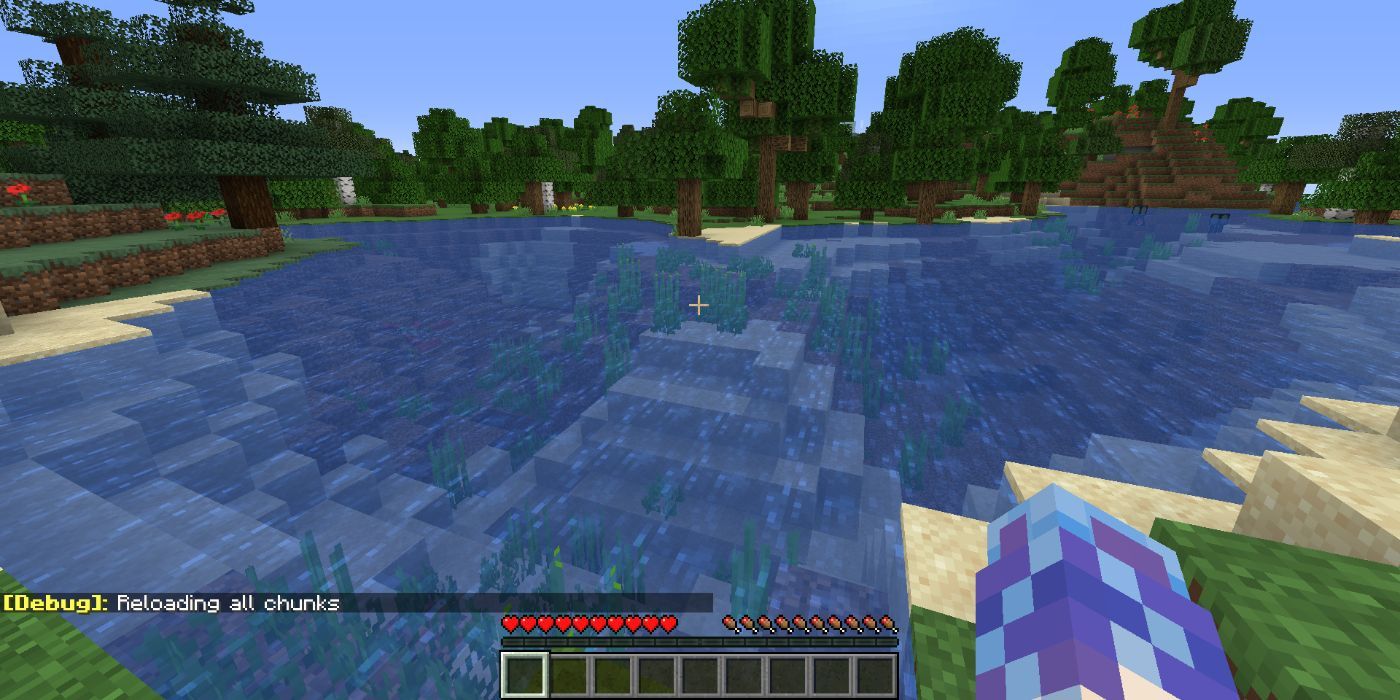 By pressing F3 and A down at the same time, you can reload all chunks within render distance. This is particularly handy if you’re having a hard time loading chunks or if there are any loading errors in a slower game. Be warned that it can make your game slow down momentarily. 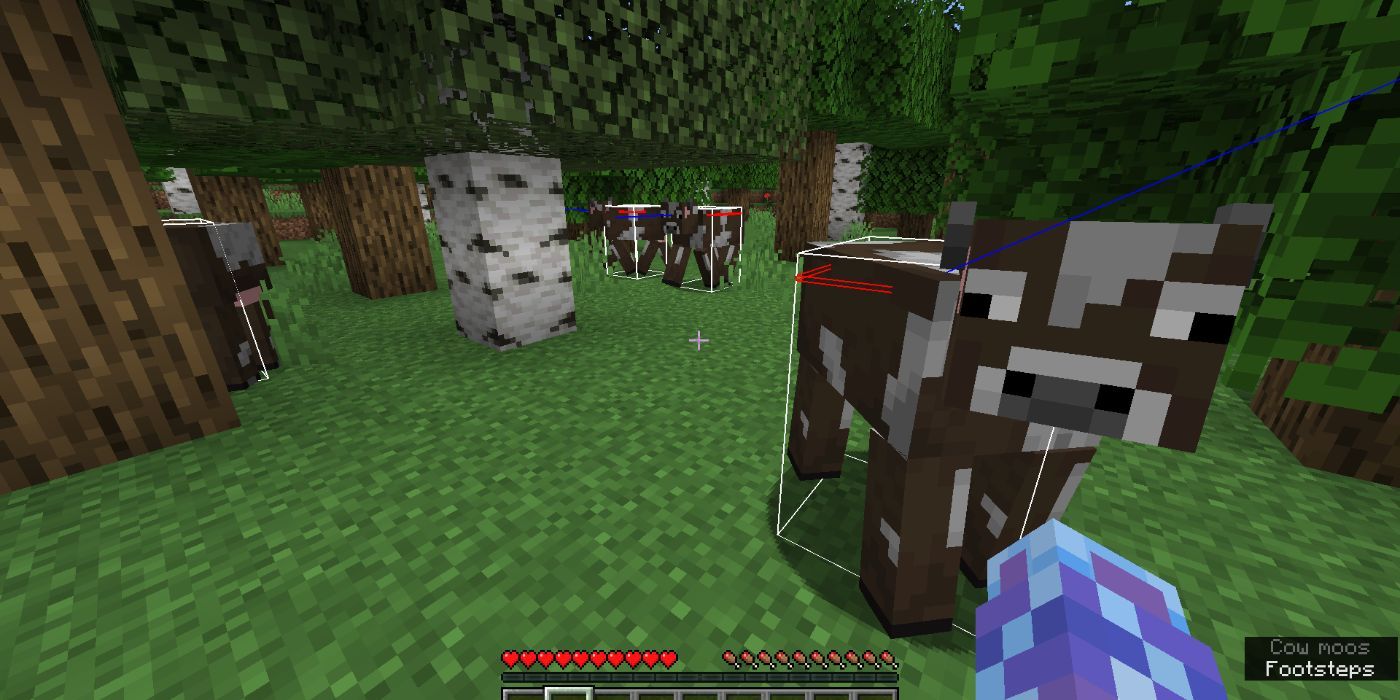 In order to see hitboxes for mobs and other entities, press F3 and B at the same time. This is incredibly useful for players who might be struggling with combat, or if they’re just starting to get into Minecraft.

The blue line on the heads of entities also indicates the direction that they’re facing. For speedrunners, this tool is absolutely vital when they eventually go on to fight the Ender Dragon. 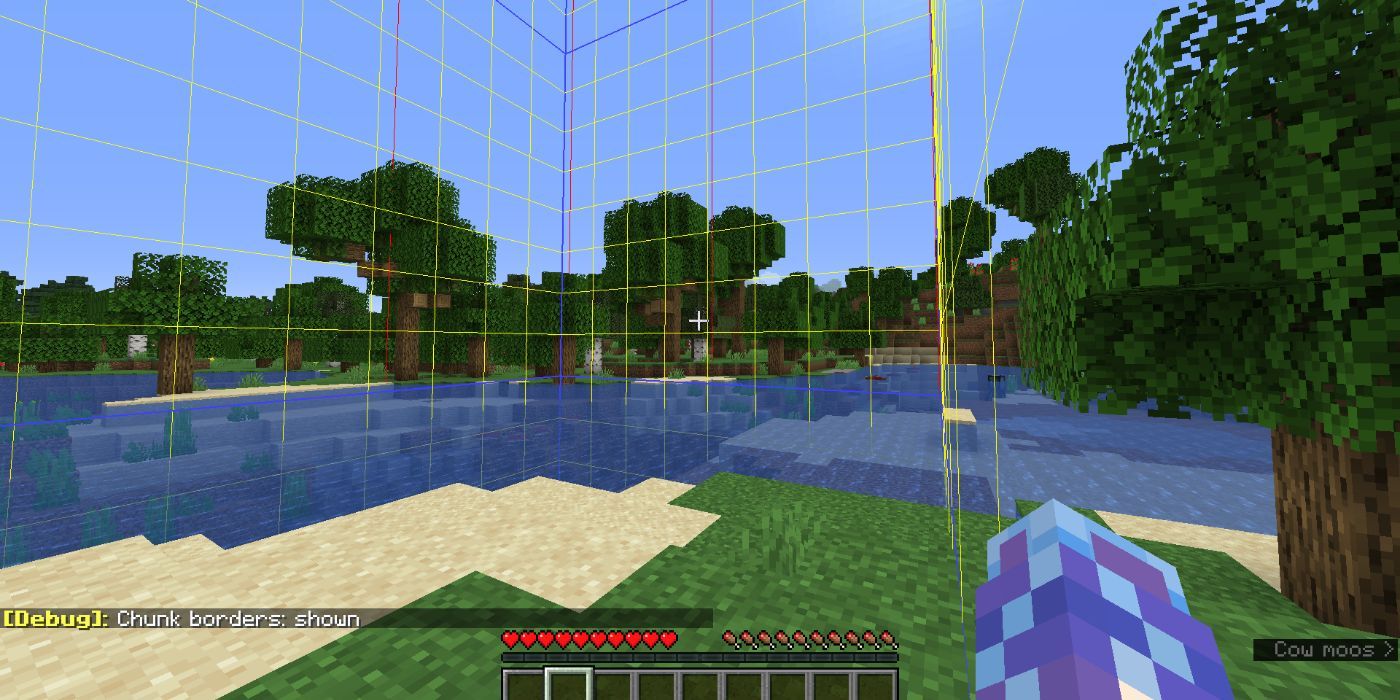 Minecraft worlds are made of chunks, which are 16 by 16 block areas. Some resources spawn differently per chunk (most notably slimes, which only spawn in special chunks). However, it can be difficult to visualize how big a chunk actually is.

Press down F3 and G to show chunk borders in real-time. This can be super useful for builders or for people tracking down a stronghold. It can help you track down the right chunk and determine which chunk is a slime chunk. 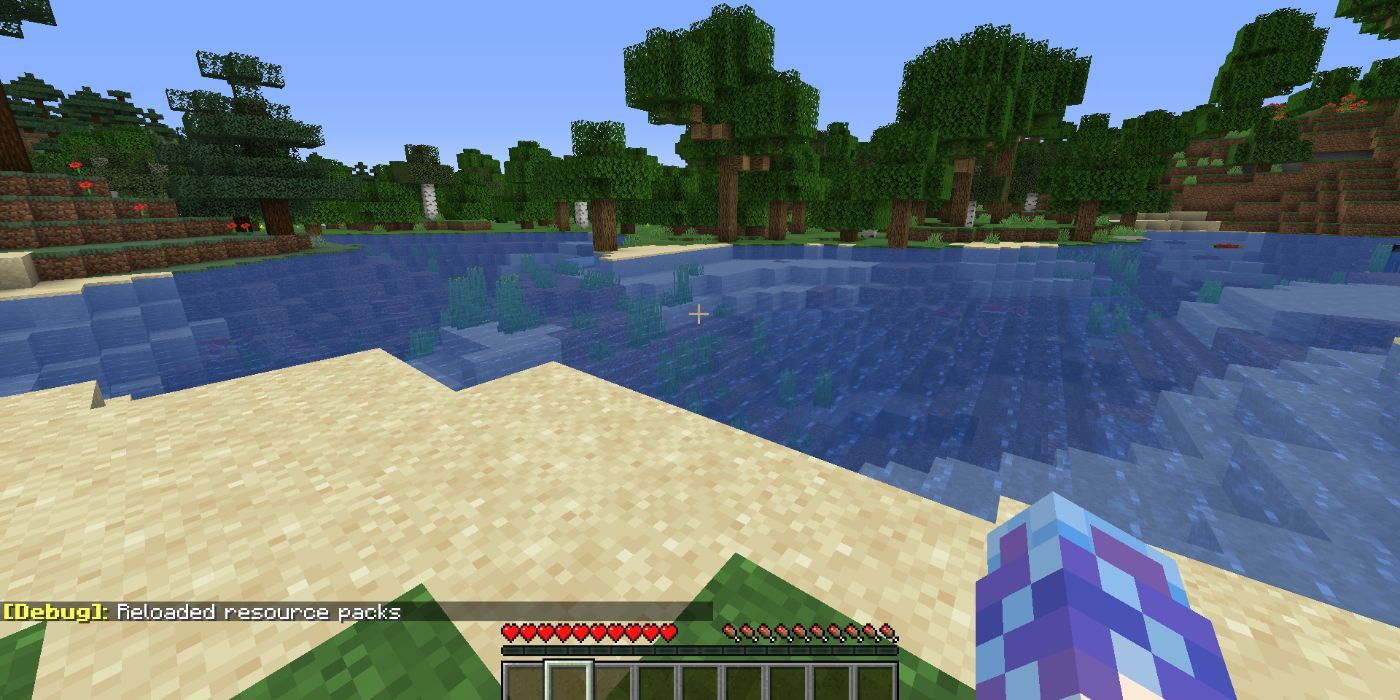 Players who use resource packs and face any issues regarding them, whether it’s texture packs or audio changes to the game, will want to know this keybind.

Press down F3 and T, and the game will reload your resource pack. It’s normal for it to momentarily return to the Mojang loading screen when this keybind is used.

Important Details In The Debug Screem 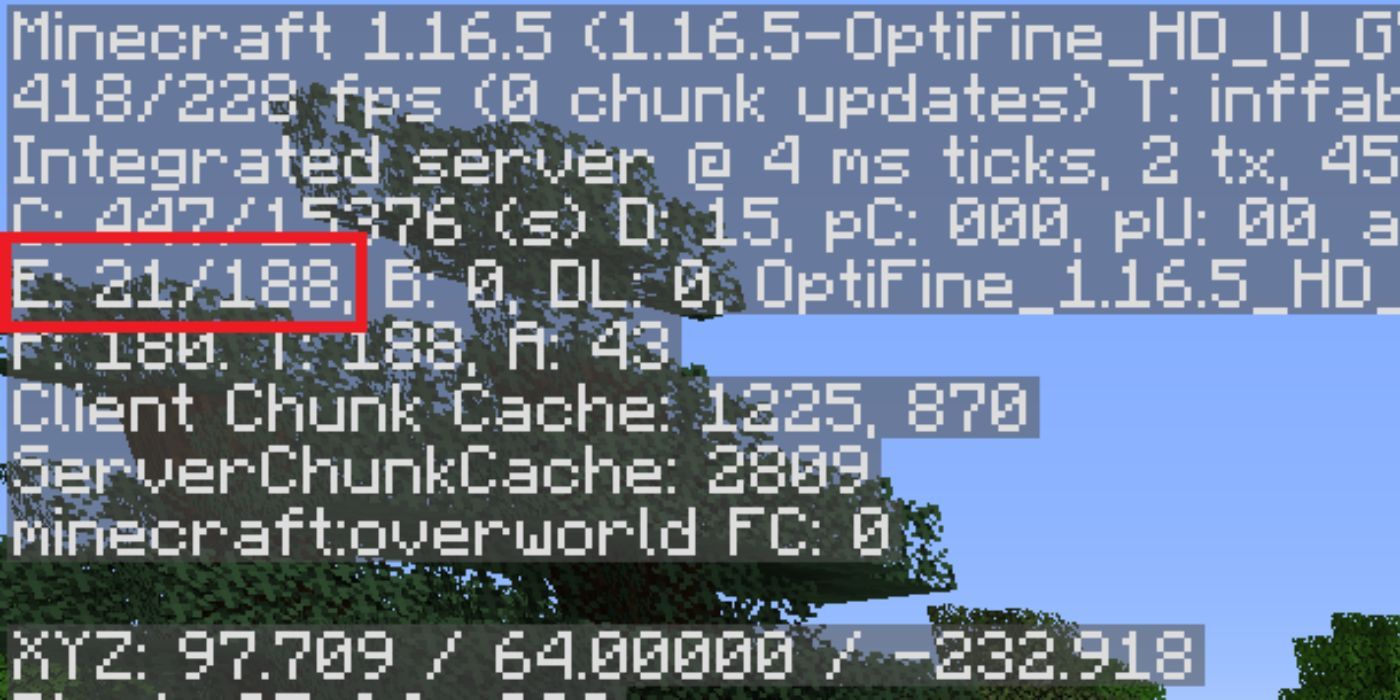 Looking around with the screen open, if the first number shown goes up, chances are there’s a structure such as a dungeon with a high number of entities somewhere within your field of view. To make this more precise, you need to up your entity render distance. Speedrunners will use this technique to find bastions and fortresses easily inside the Nether. 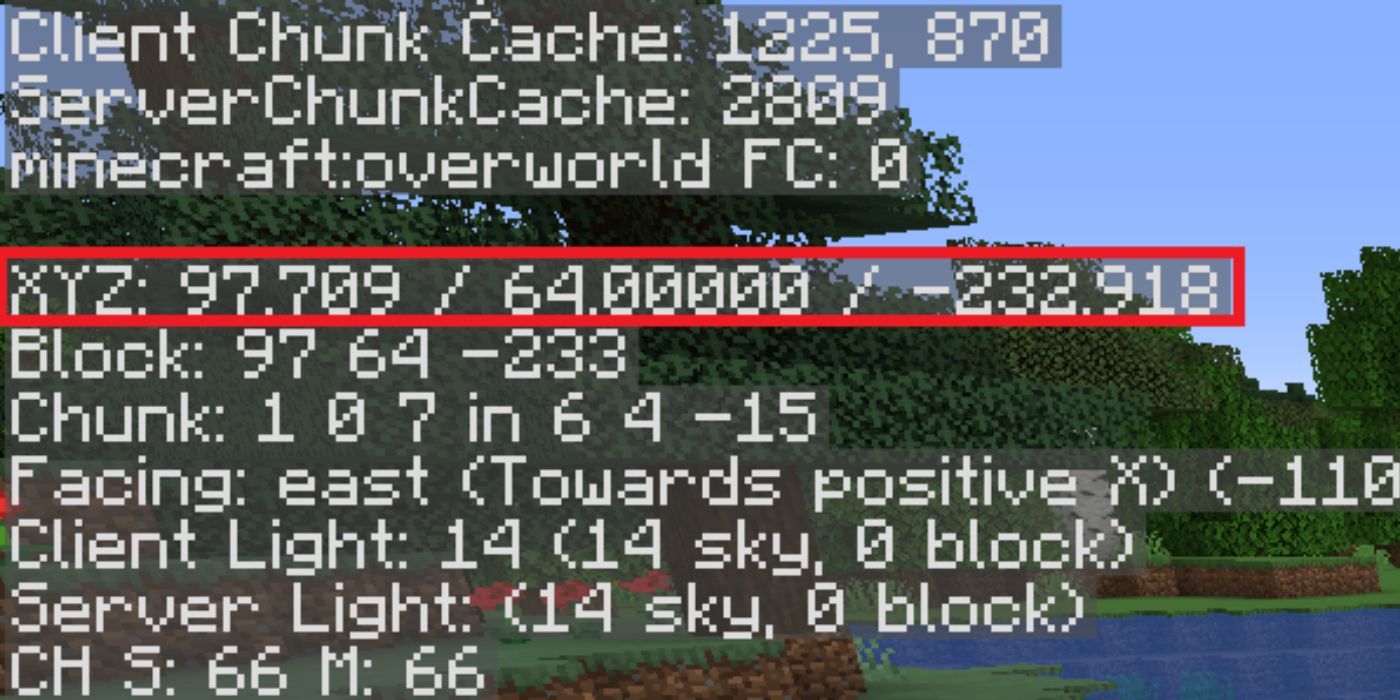 Y is usually not relevant when sharing or jotting down coordinates in the overworld. It simply shows your elevation in the world and is much more useful when traveling in the Nether, where you might spawn at different elevations. 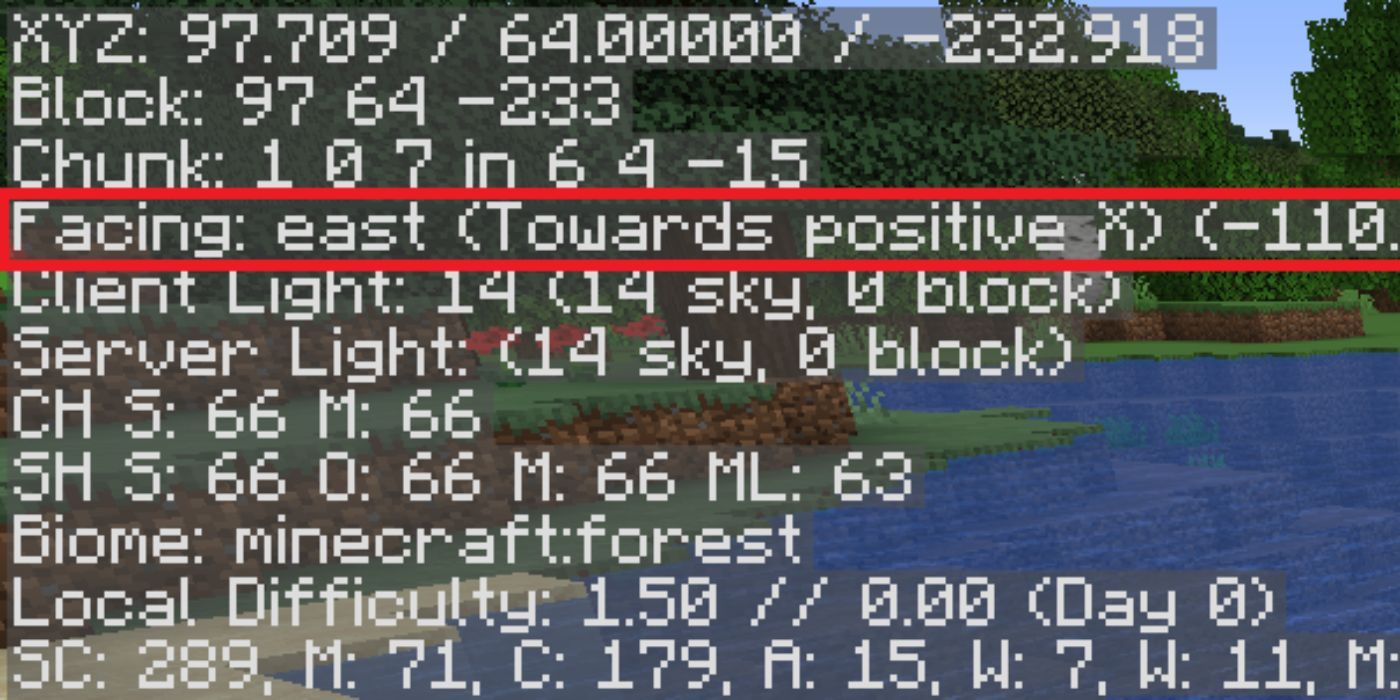 Having coordinates to help you out is one thing, but when it comes to reading any of the maps in Minecraft, you’ll always need to know which way you’re facing. That’s because maps are always made the same in the game, with north being up, south being down, east being right, and west being left.

In order to make things easier for yourself when trying to find a buried treasure spot or even a Woodland Mansion, make sure you’re facing the right direction by checking the Facing data on your debug screen. 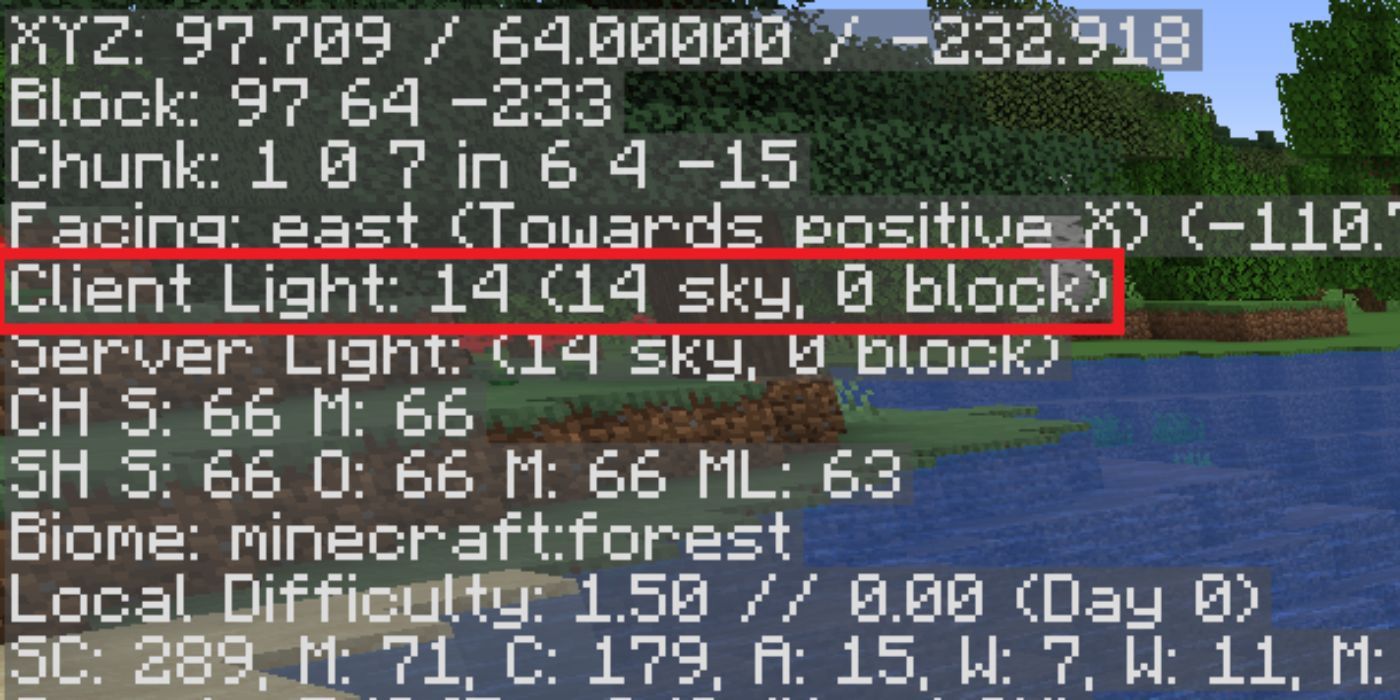 Light levels are an important gameplay feature, because hostile mobs will only spawn at a certain light level. Anything under a level of 7 is guaranteed to spawn a mob, so if you’re looking to make your base safe, use the debug screen’s Client Light data to check your light levels.

The light level also shows the specific level on a block and that of the sky. What you most care about, however, is the first number.

Biome: What Biome You’re In 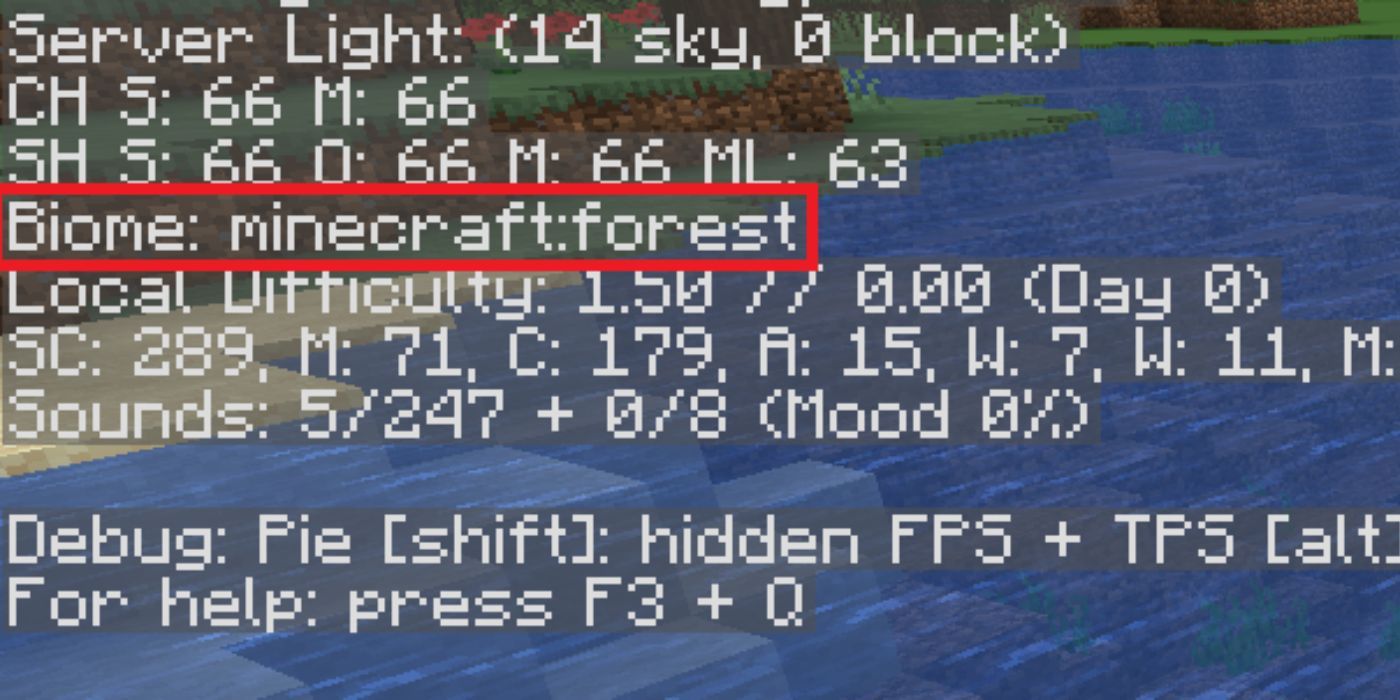 In Minecraft, biomes aren’t always completely and strictly separated from one another. Occasionally, biomes will bleed into each other to give the world a more natural appearance.

If you’re confused about your current location and the biome you’re in, the Biome data will tell you what biome the block you stand on is in. Some biomes can be as small as just a handful of blocks, but it can still make a huge difference while standing on those blocks.

Local Difficulty: How Tough The Game Is Locally 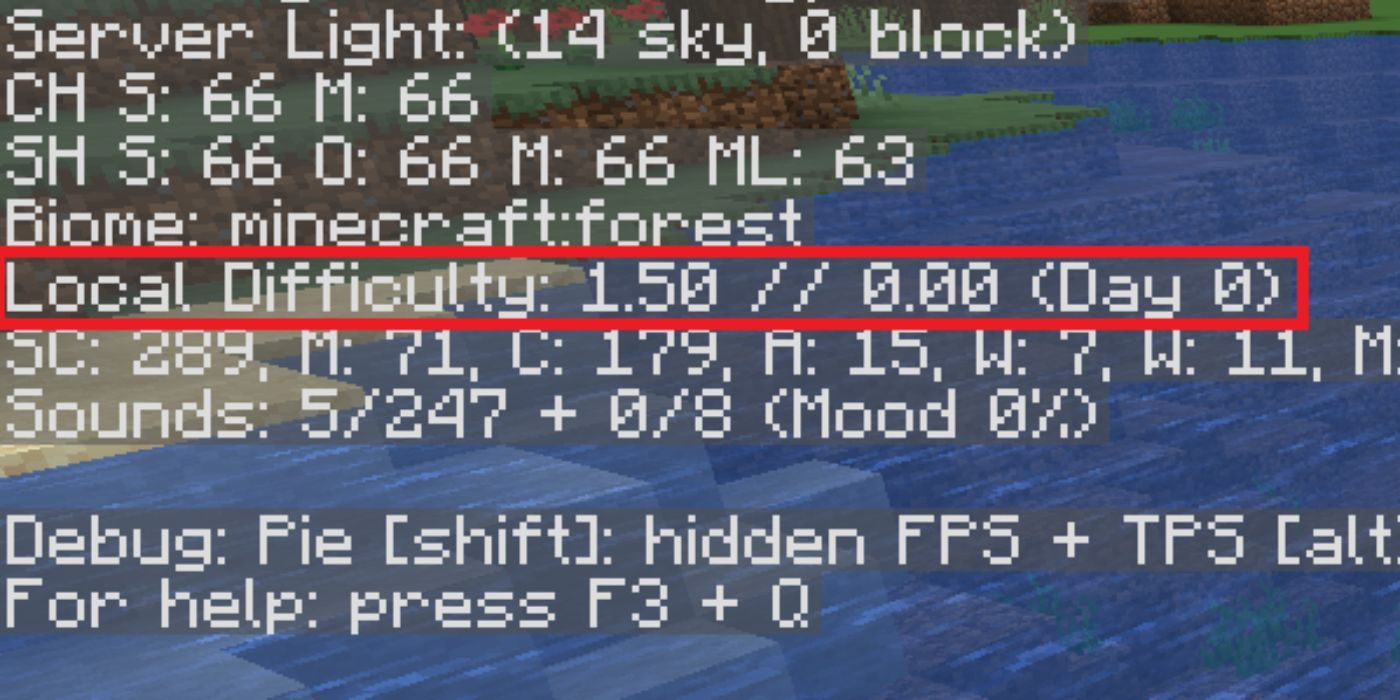 Most players are familiar with the regular difficulty selected from the New World menu at the start of the game, but not many know about Local Difficulty. The game actually naturally gets more difficult over time based on a couple of factors, and the difficulty ranges from 0.00 to a maximum of 6.75.

The length of time you live in a chunk, the length of your overall playtime, and even the phase of the moon are all factors in increasing difficulty. Next to it, you’ll also see how many days you’ve gone by in your Minecraft world.

Mem: Amount Of Memory Being Used 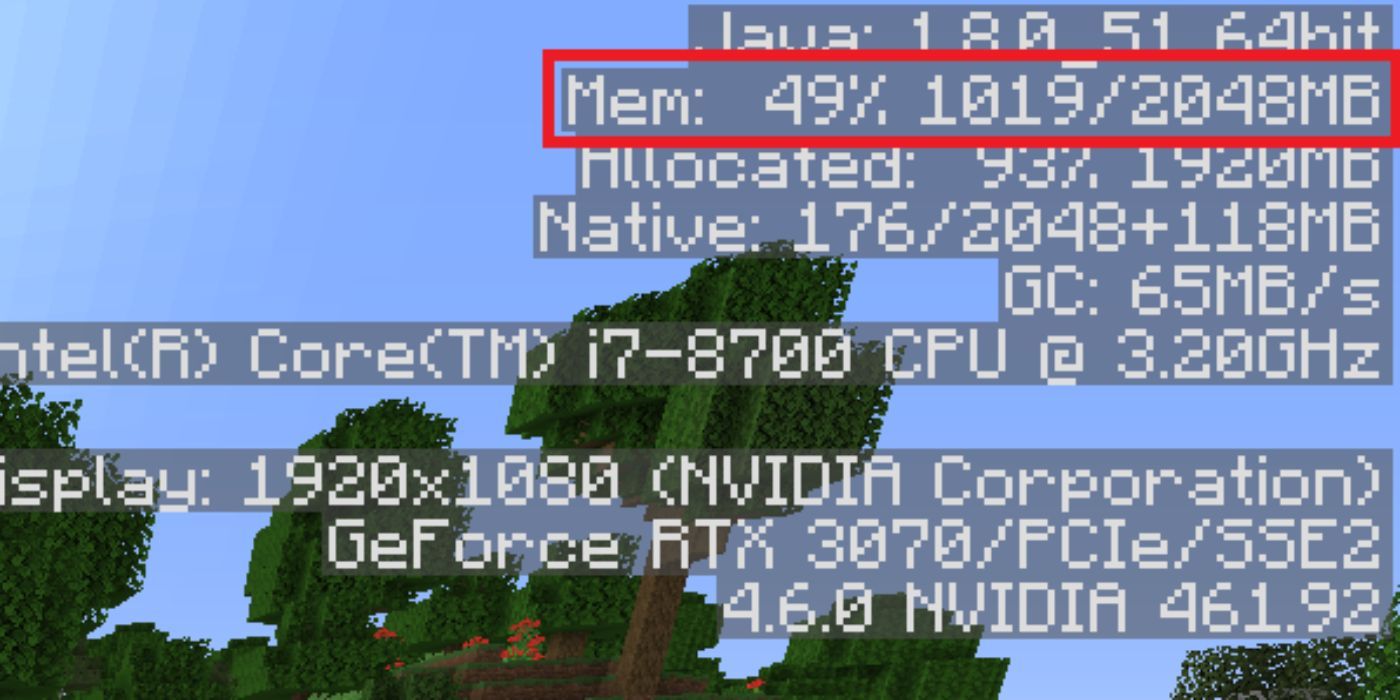 On the right side of the debug screen, you’ll receive more information about your PC. It also shows how much memory is being used, first in percentage and then the actual amount out of the maximum amount of memory the game can use.

This is pretty handy information for players who are worried about their game being slow. Memory is most often a culprit for a sluggish gameplay experience. 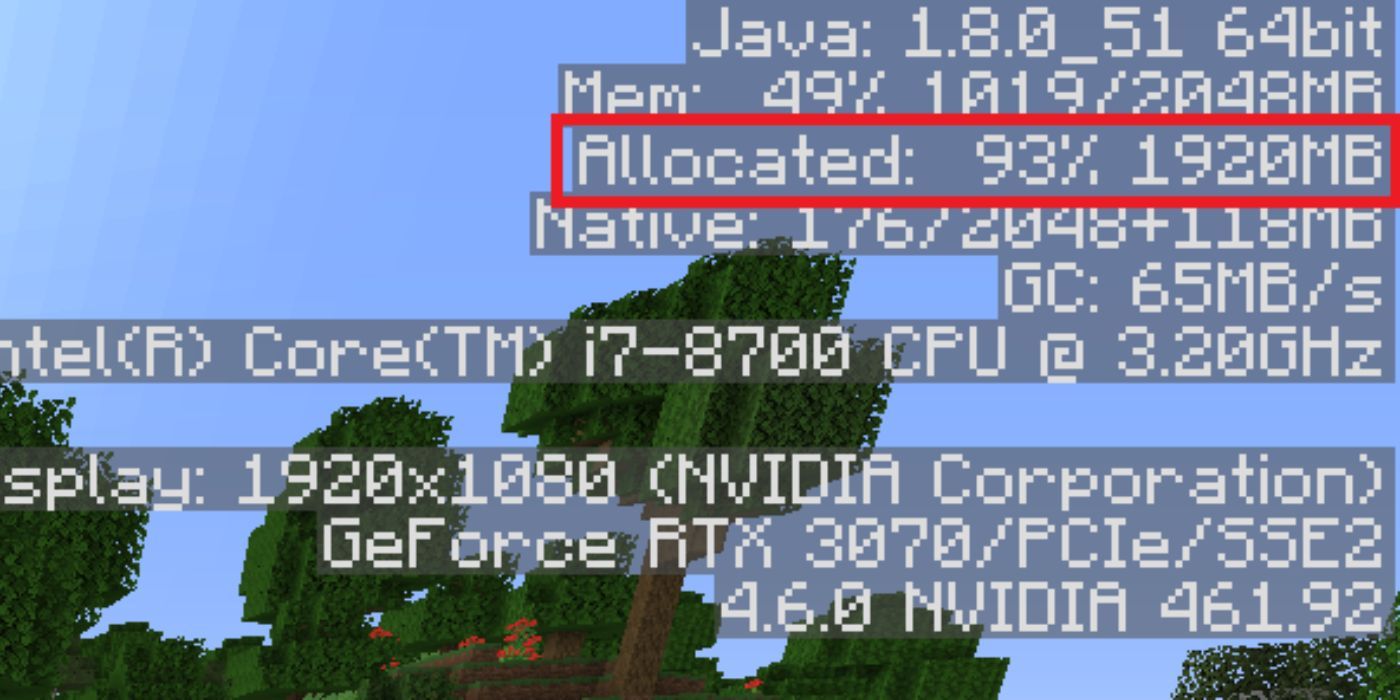 In order to up your memory for Minecraft, you first need to know how much memory is already allocated for the game. The Allocated part reveals just that, first in percentage and then in the precise amount. 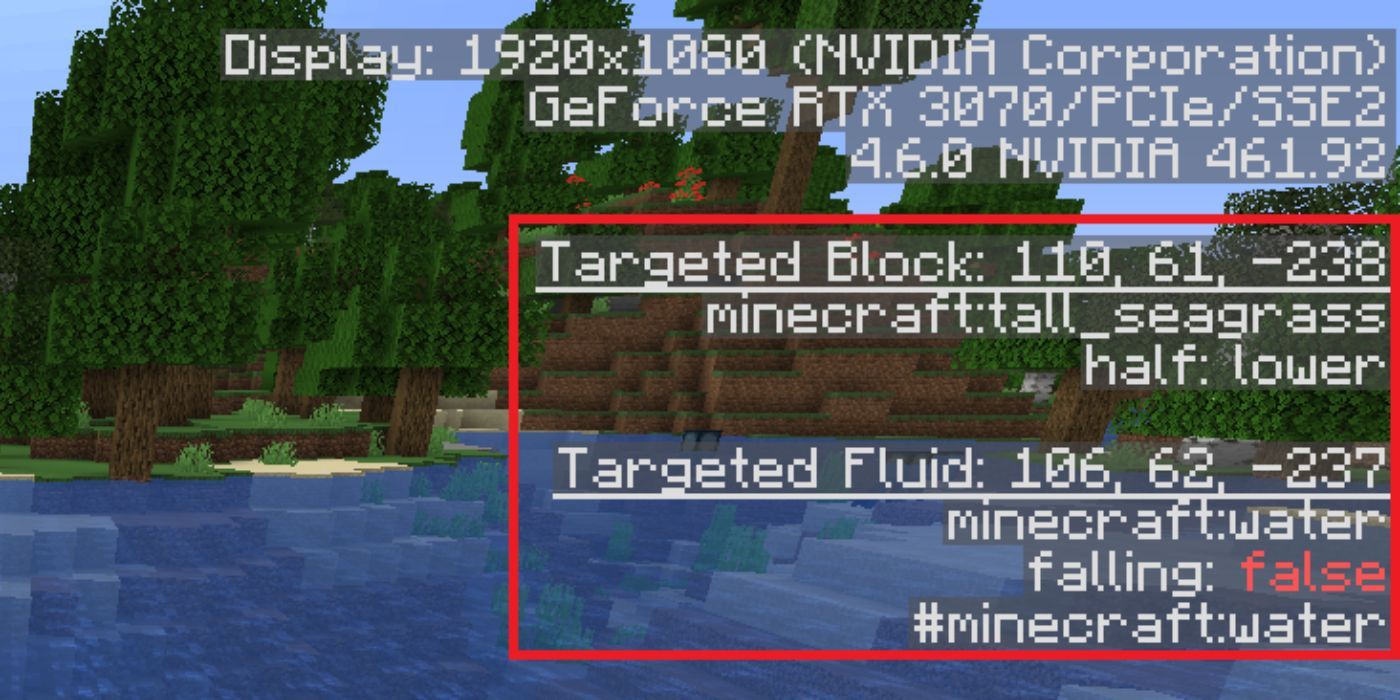 There are so many unique blocks and entities in Minecraft it might feel extremely overwhelming for a beginner. Luckily, the debug screen gives you just a bit more information on the block your crosshair is currently on.

The data will depend on what you’re looking at. If it’s an entity, it will show information on a Targeted Entity, rather than on a block or fluid.

NEXT: Minecraft Complete Guide And Walkthrough 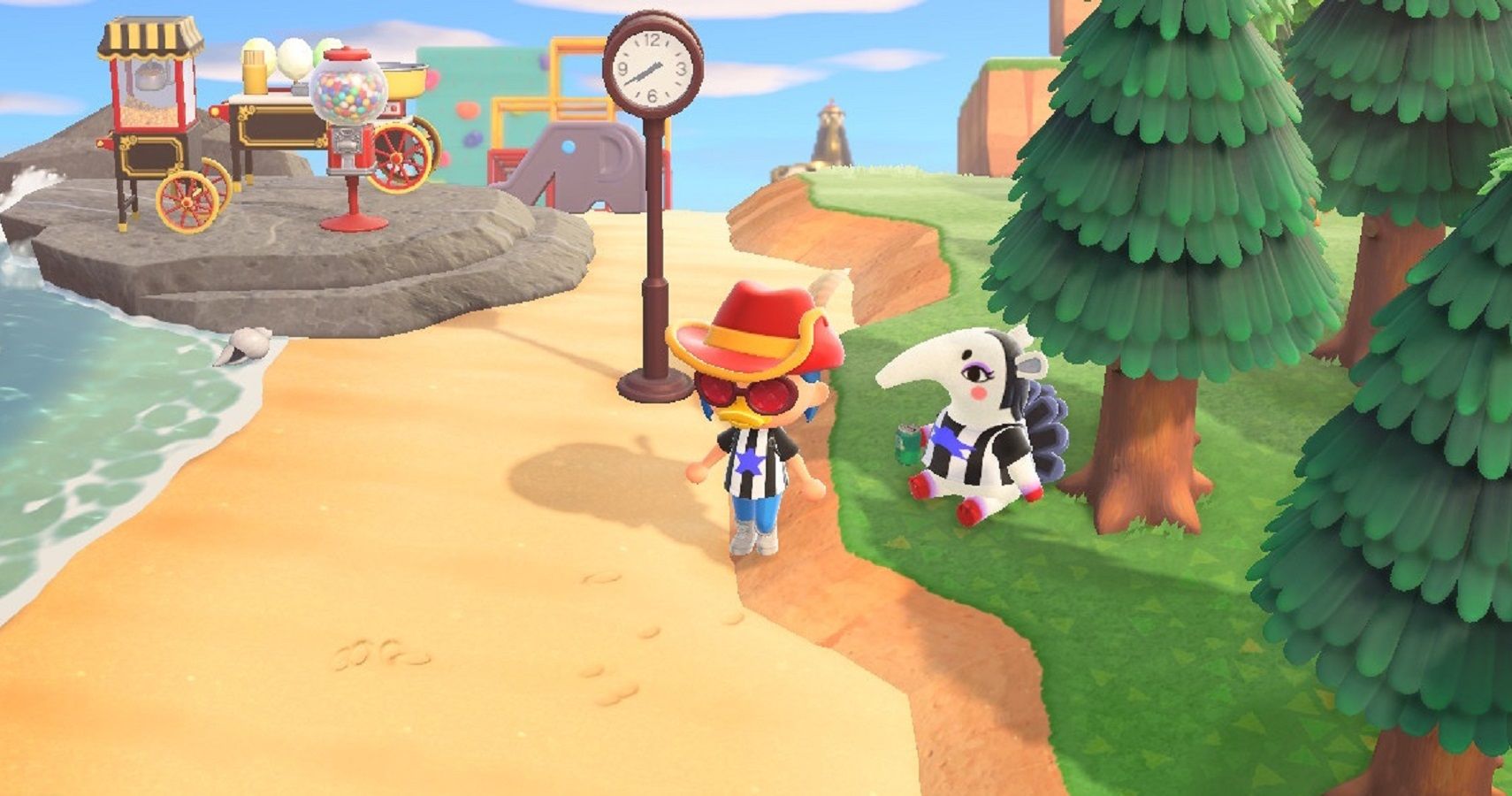