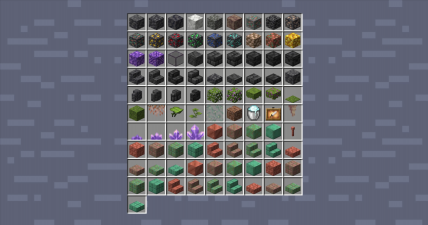 Mojang has revealed that Minecraft’s Caves & Cliffs Part 1 update will add “up to” 91 new blocks to the game.

In a video uploaded to the Minecraft YouTube page, Mojang developers Alexander and Brandon go into detail about some of the blocks being added in the upcoming first part of the Caves & Cliffs update, revealing the total number of blocks as 91 and detailing some of the more interesting additions.

Two of the coolest blocks are featured early on in the video. The powder snow block is a block that you can fall into and move around in, whilst the big drip leaf block acts as a platform that will fall down after being jumped on.

The “up to” bit of the 91 block statement seems to be there in case of delays or certain features not being added in the first part, which makes sense considering the first part of the update still hasn’t been dated beyond a vague “Summer 2021”, and the update is so big it was split into two parts.

Interestingly, some of the blocks that are being added in the update won’t actually properly feature in the game until the second part of the Caves & Cliffs update comes out later in the year and introduces some new biomes. Items like moss and glow berries can be found in the first update despite being attached to the second part, and roaming traders will also potentially have some of the blocks. Copper is one of the bigger things coming to the first update and will allow players to create lightning rods to attract lightning to specific areas.

The update video also goes into some detail about some of the changes coming to cliffs in the first part of the update. Some of the highlights include deep slate versions of every type of ore in the game and updates to the lighting and structure of mine shafts. The textures for all of the game’s ores have also been changed in order to better accommodate colourblind players who had difficulty telling them apart.