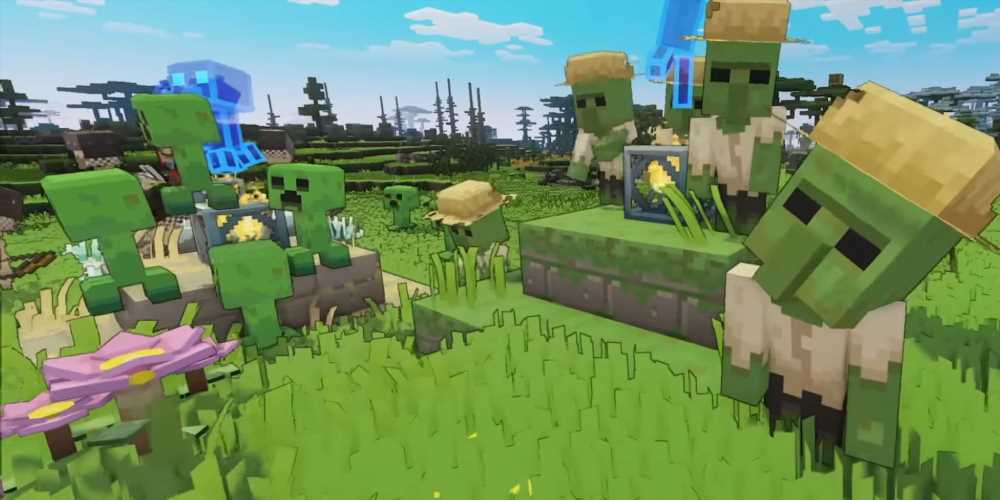 Minecraft Dungeons was the series' first major spin-off and it did a lot of interesting things with existing mobs while also adding its own – see Redstone Golem. And Legends, an all-new RTS, is doing the same as revealed in a new feature video.

We have plank, cobblestone, grindstone, and mossy golems, cutesy little cubes with arms and legs, as well as flail pigs, and more to be found in-game. Existing mobs have been overhauled to fit Legends' art style, turning them more chibi-like with cell shader outlines and squished proportions. Creepers are now disarmingly adorable which is fitting because they're no longer hostile.

Nope, you befriend skeletons, zombies, and creepers to build up your army. There are bigger fish to fry and the denizens of Minecraft understand that. We see as much when Steve, on a hilariously small horse, rides into battle with a horde of undead behind him. "The game is a utopia," lead artist Lisha Leston said. "You have a bit of a different relationship with something like the creeper than in vanilla Minecraft."

You'll get to use these mobs in battle as seen in the video above where a group of creepers are sent to a fort so they can blow up its wall. But the team wanted to make zombies and skeletons a little more friendly looking – originally, that meant toying with the face, giving them a smile, but this was scrapped. Instead, zombies and skeletons were given little hats with bigger eyes. Hats also serve a functional purpose – zombies and skeletons burn in sunlight, and the hats protect them.

So everyone coexists in this world. What's the villain, then? Piglins. They come from the Nether, a twisted Hell-like dimension, and we fight them in the base game, raiding their forts and pillaging their goods. Now it's their turn to invade us and "take everything that's not theirs."

They're designed like children armed with weapons. There are tiny grunters and runts with giant maces too big for their bodies, but also other variations that will prove more formidable. The grunters and runts are the first wave and there are millions of them, all sent to die while making a dent in our defences.