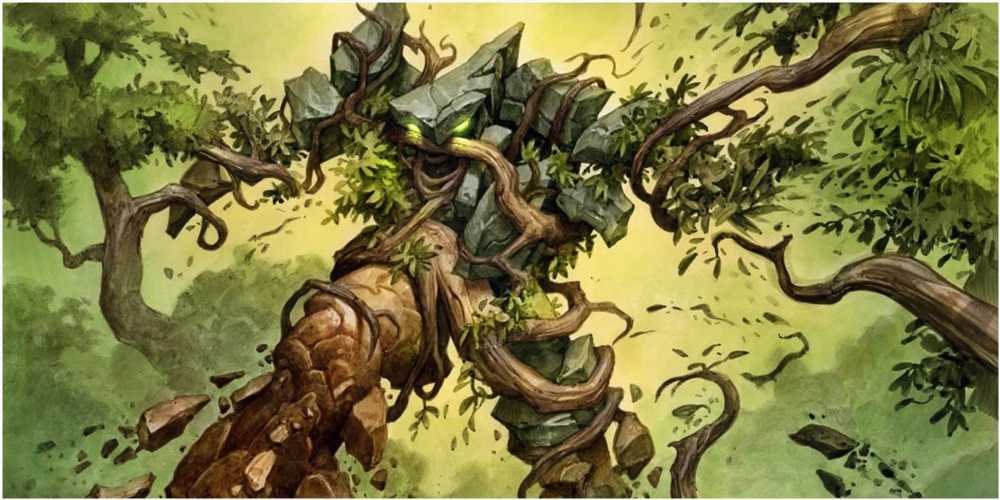 Few Magic: The Gathering products are as popular as preconstructed Commander decks. Fully playable out of the box, these decks are regularly released alongside every set, containing both new cards designed for the Commander format, as well as much-needed reprints of older cards.

Due to their combination of accessibility and high-quality card inclusions, these decks are great choices for new and experienced players alike. While most sets release alongside two decks, Magic's most recent set, Streets of New Capenna is released alongside five Commander decks; each representing one of the set's three-color crime families. So today, we're going to examine the cards featured within the Riveteers Rampage deck and see which are the strongest. 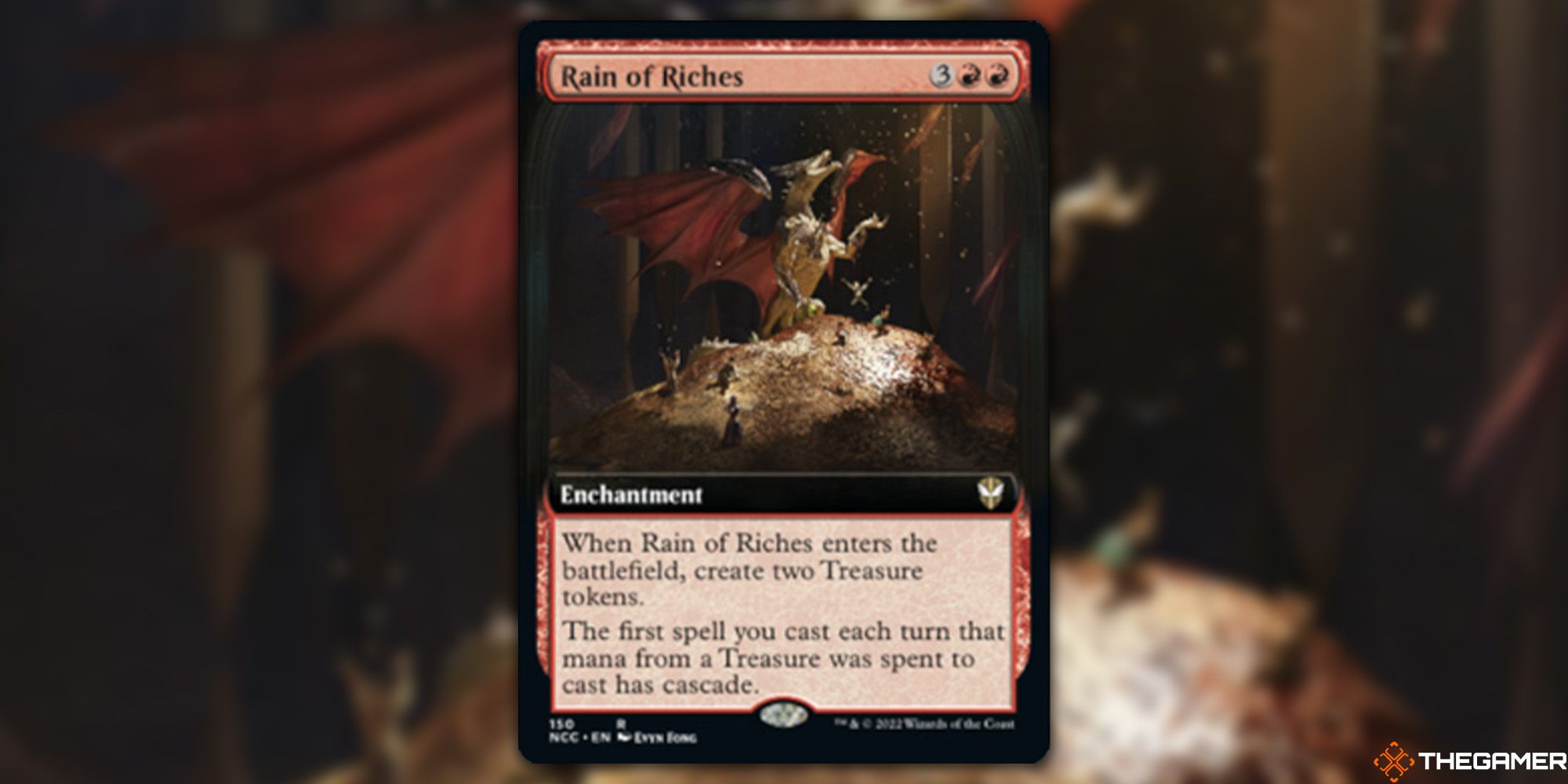 For the cost of five mana, Rain of Riches is a Red enchantment that synergizes with decks that aim to utilize treasure tokens, capable of using treasures to cheat spells directly into play. While this enchantment creates three treasure tokens when it enters the battlefield, its core value is in its ability that states whenever its controller casts their first spell of a turn in which mana from a treasure was used to cast the spell, that spell gains cascade.

Cascade is a stellar ability that effectively allows a player to get two spells for the price of one, revealing cards from the top of their library until a non-land card with a lesser mana value is found, with that spell being castable for free. Though the ability to provide one of its controller's spells with cascade each turn is quite potent on paper, it's important to note that this card only functions particularly well in decks capable of reliably producing treasure tokens. 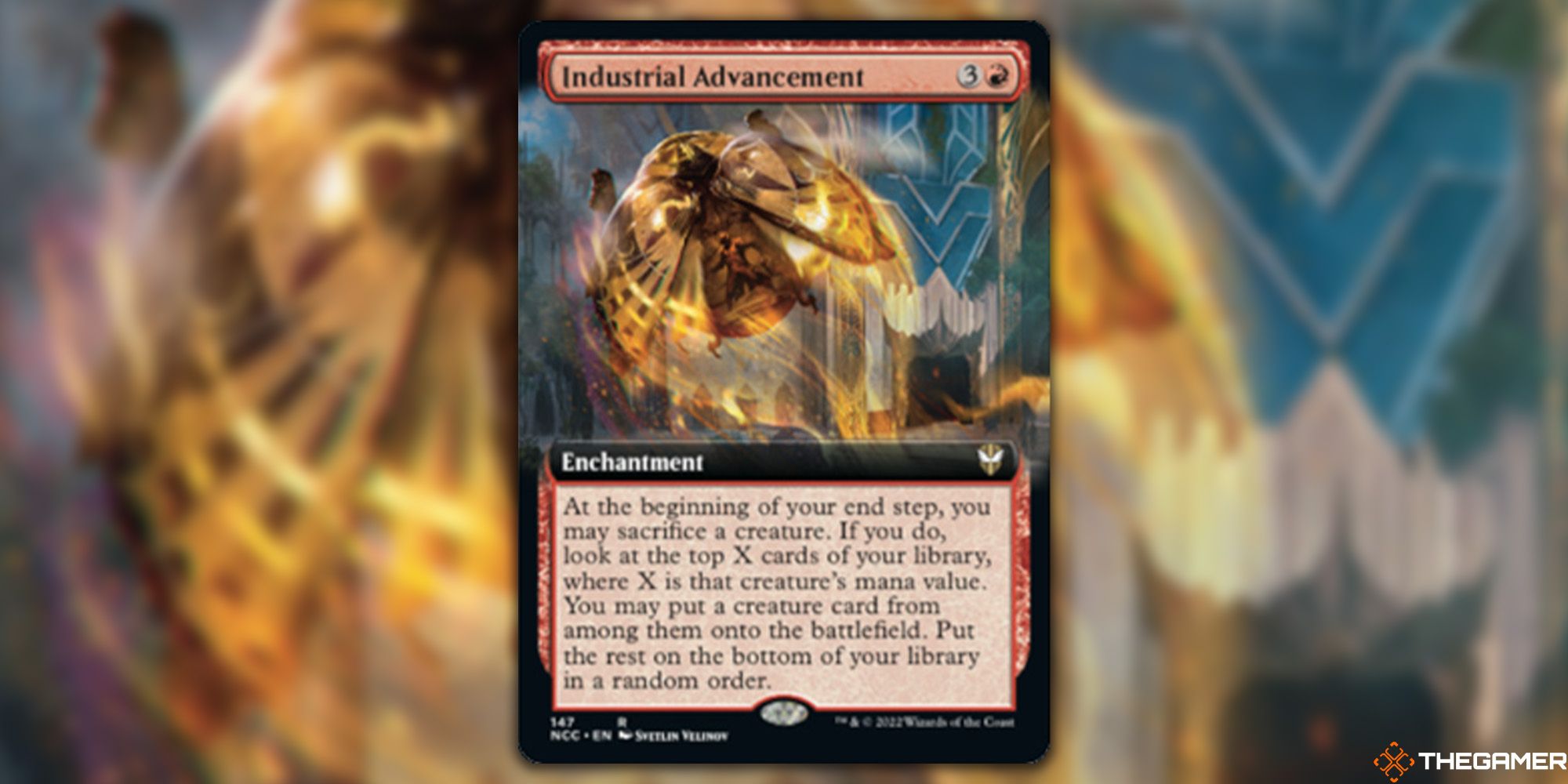 A new red enchantment for four mana, Industrial Advancement is a risky yet potentially potent card that can allow high value creatures to be cheated into play from one's library.

At the beginning of its controller's upkeep, that player can sacrifice a creature. If they do, they look at the top X cards of their library where X is that creature's mana value, putting one creature found this way directly into play. This means that by sacrificing higher value creatures, a player is able to look at a larger number of cards while sacrificing a creature with a low mana value this way is a much riskier endeavor. 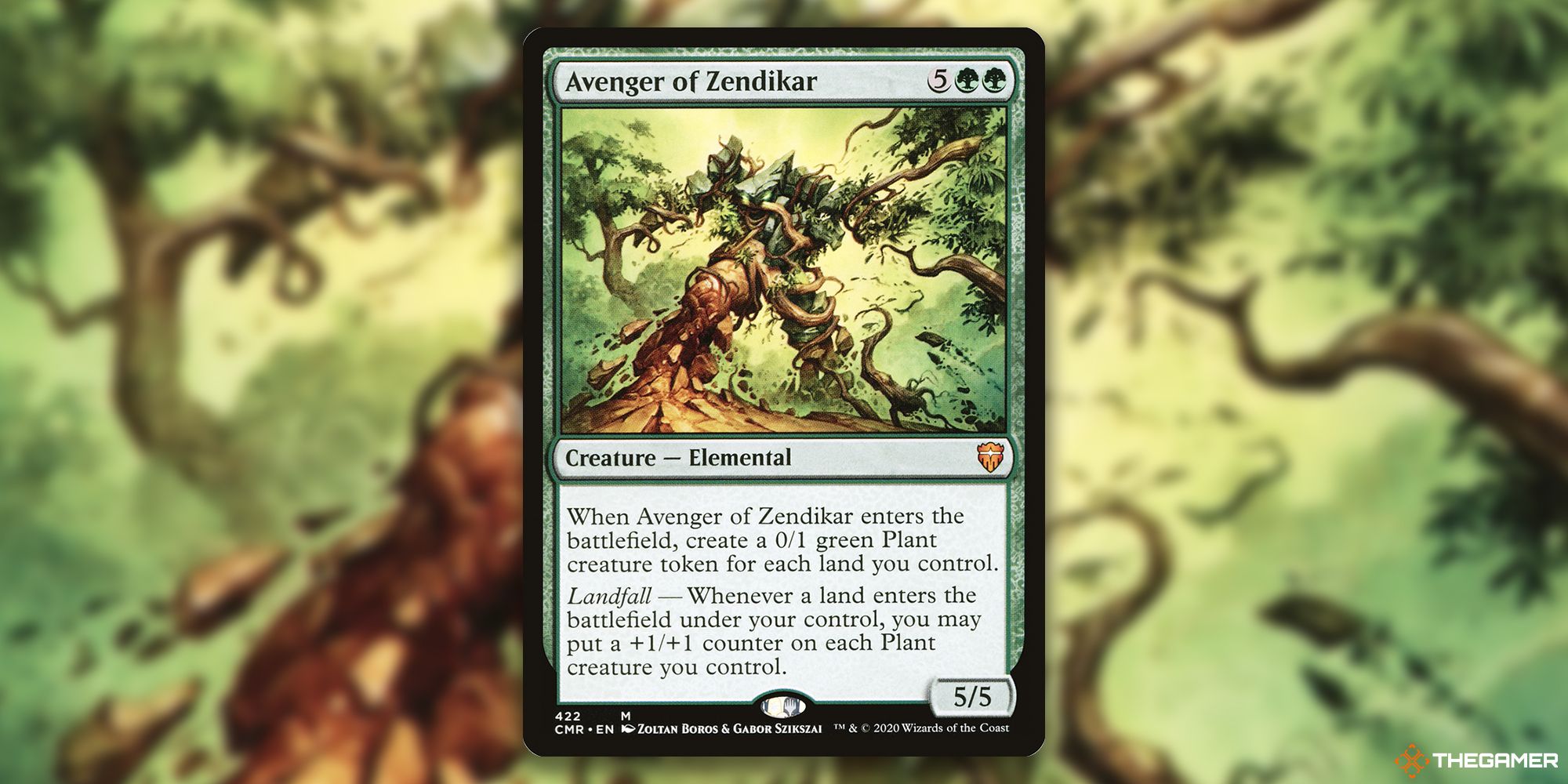 Avenger of Zendikar is an excellent reprint within the Riveteers Rampage deck, seeing a significant amount of play in land-focused Commander decks. A Mono-Green elemental for seven mana, upon entering the battlefield, its controller creates a 0/1 plant token for each land they control. This means that late into a game, this creature can instantly amass a sizable number of plants.

Once in play, whenever a land enters the battlefield under its owner's control, they may put a +1/+1 counter on each plant they control, meaning these tokens can blossom into substantial threats. Whether a player is building a deck based around land-based synergies or tokens, Avenger of Zendikar is always a great inclusion in the 99 of a deck.

Though not the featured Commander of the Riveteers Rampage deck, Jolene, the Plunder Queen is a stellar new commander that may end up serving as the premier option for those looking to build decks around the use of treasure tokens. Both serving as a means of generating treasure for its controller and an incentive for opponents to attack each other, whenever a player attacks one or more of Jolene's controller's opponents, that attacking player creates a Treasure token.

Additionally, whenever Jolene's controller would create treasure tokens, they create an additional token. Not only does this improve other treasure-generating effects, but it allows Jolene to provide its controller with more treasures than it would provide to one's opponents. While treasures are most often used as mana sources, Jolene also gives them an alternative purpose, allowing five treasures to be sacrificed at any time to put five +1/+1 counters on Jolene. 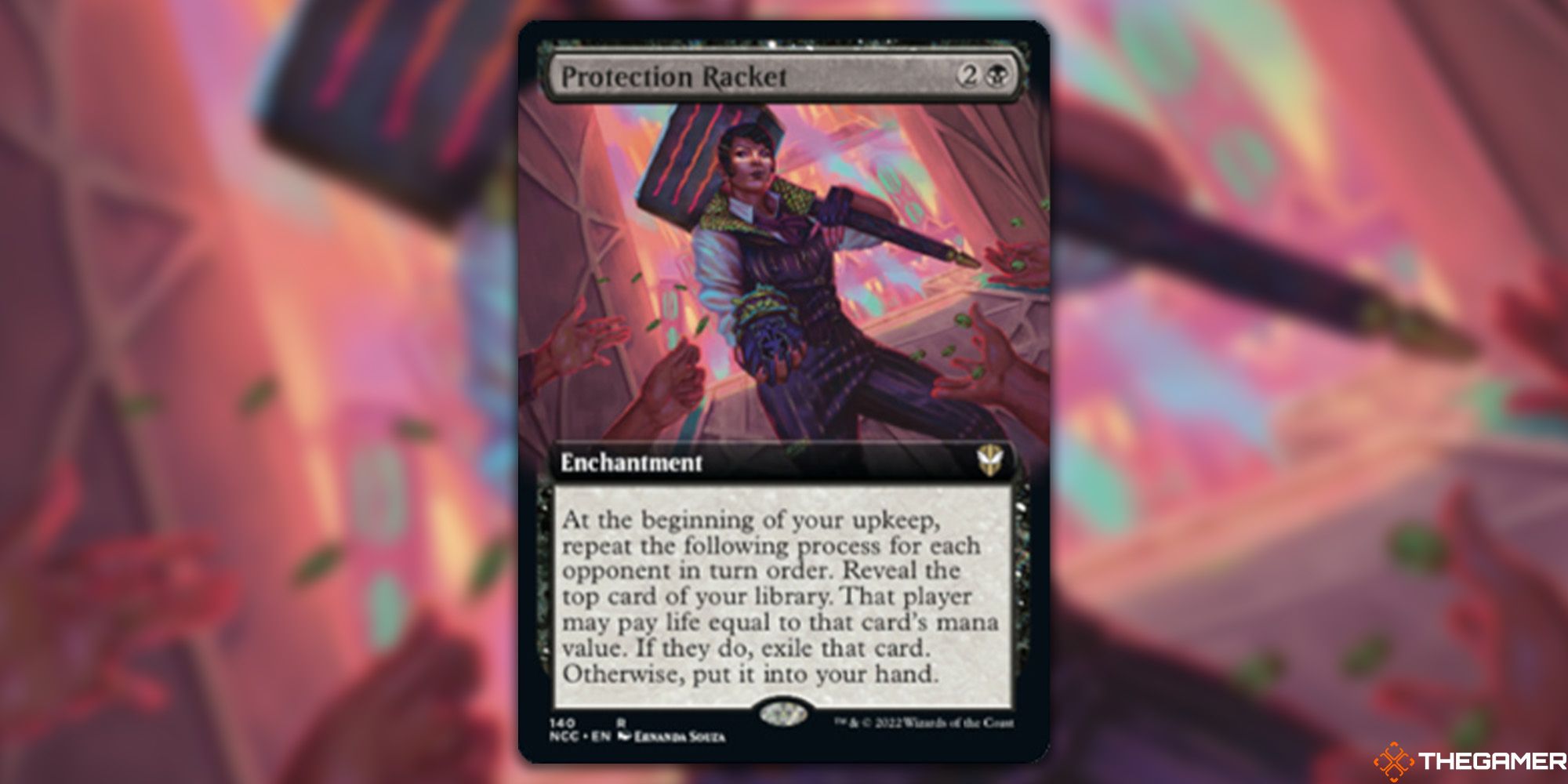 Protection Racket is an impressive Black enchantment for five mana that is capable of simultaneously offering card advantage to its controller whilst potentially dealing severe damage to opponents over the course of a game. At the beginning of its controller's upkeep, for each opponent, its controller reveals the top card of their library. The opponent at hand has two options: allow that card to be put into its owner's hand, or they may pay life equal to its mana value to exile it.

This means that if opponents don't want to pay the life tax from Protection Racket, in a standard four-player game of Commander, this card allows its controller to draw three additional cards on their turn. Even if opponents refuse to allow this card to provide card advantage, the damage Protection Racket deals to one's opponents over the course of a game is capable of piling up rather quickly.