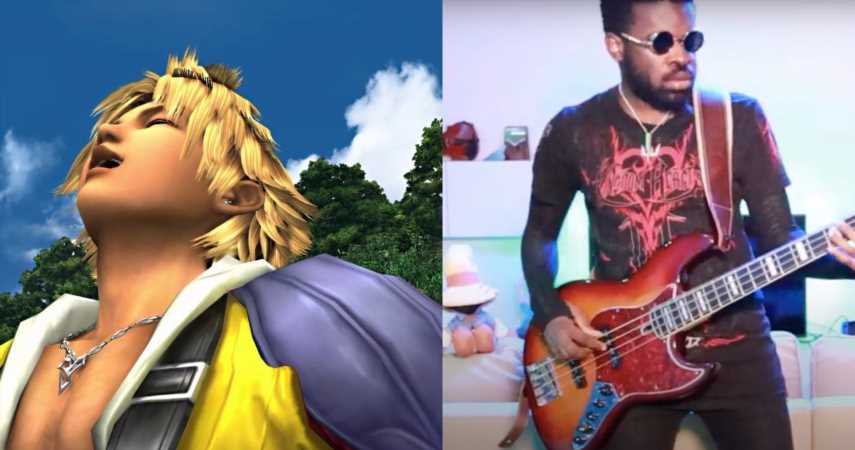 Whether you are a fan of Final Fantasy 10 or not, chances are you have come across a rather cringe-worthy scene from the game. The infamous “Tidus laughing” scene has been a source for plenty of jokes and memes since the game launched. Well, one fan decided that Tidus’ laugh would make the perfect beat for a song, and he is not wrong. Turns out, Tidus’ laugh is pretty funky.

Alex Moukala, a music producer and composer, took to Twitter to share a rather funky mix-up of the Final Fantasy 10 scene. The song, which uses Tidus’ laugh and the instrumental track “To Zanarkand”, is a funky medley of bass lines and drumbeats that makes even Tidus’ terrible laugh sound pretty cool.

Along with this great video of Moukala rocking out to his meme-inspired creation, he has supplied the bass tabs and backing track for the song, which he calls “To Zanarkand Is Funky”. He also shared that this particular bassline was one of the hardest he has written and that working on the track really highlighted the weird way this scene fits into the narrative of the game. While the laugh has become a source of joy for fans, it is also one of the first times in the game where the two protagonists, Tidus and Yuna, bond over their internal sadness and grief. Though the moment is a light-hearted one, it’s tinged with a sadness that comes from having to pretend to be happy when you are not.

This is not the first Final Fantasy inspired track by Moukala, whose music has been featured in films like Avengers: Endgame and John Wick: Chapter 2. The composer has amassed over 7000 Final Fantasy remixes and music clips from the series, which he documents on his YouTube channel. These tracks, which includes a funky remix of Final Fantasy 7’s “One-Winged Angel Rebirth” that would make even Sephiroth bust a move, also aim to help up-and-coming composers and musicians learn some tips and tricks.

Final Fantasy developers Square Enix even joined in on the fun by commenting on the video with the “neutral face” emoji. This is likely to mean that the developers would rather forget the infamous laughing scene and leave it buried in the past. But, that is not likely to happen as it is one of the game’s most memorable scenes, simply because of its absurdity. Plus, with such a sick beat attached to it, people won’t be forgetting Tidus’ laugh anytime soon!