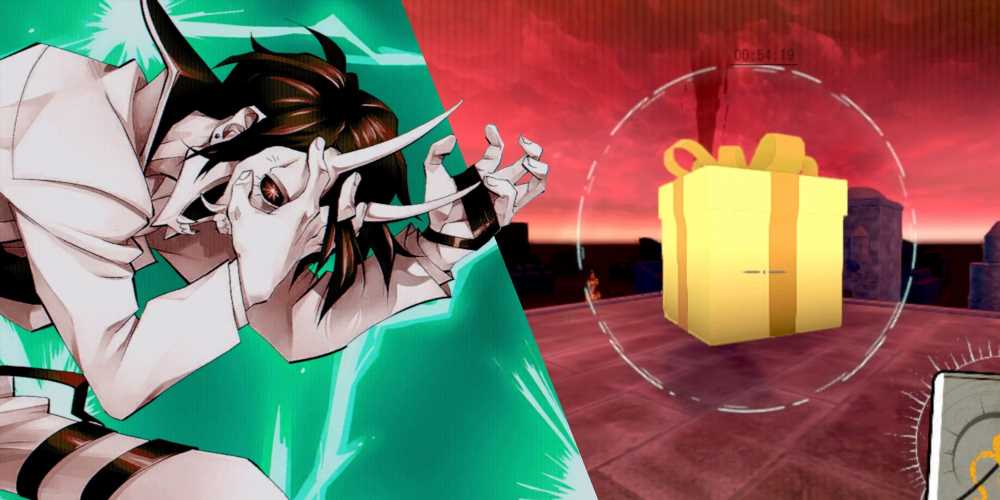 Neon White's fourth mission is a pretty notably abbreviated one. This makes sense, as it is primarily a boss encounter. So, we are throwing it in the with the fully-featured fifth mission. Mission 5 will see you utilizing a brand-new weapon: the shotgun. This new addition to your arsenal will have you turning yourself into a giant, human fireball and dashing in every which way.

And, of course, with more mobility comes more ways to hide those precious, precious gifts. But worry not, whether they be sitting on top of a distant tower, or cleverly concealed under your feet, we have you covered for both of these missions. 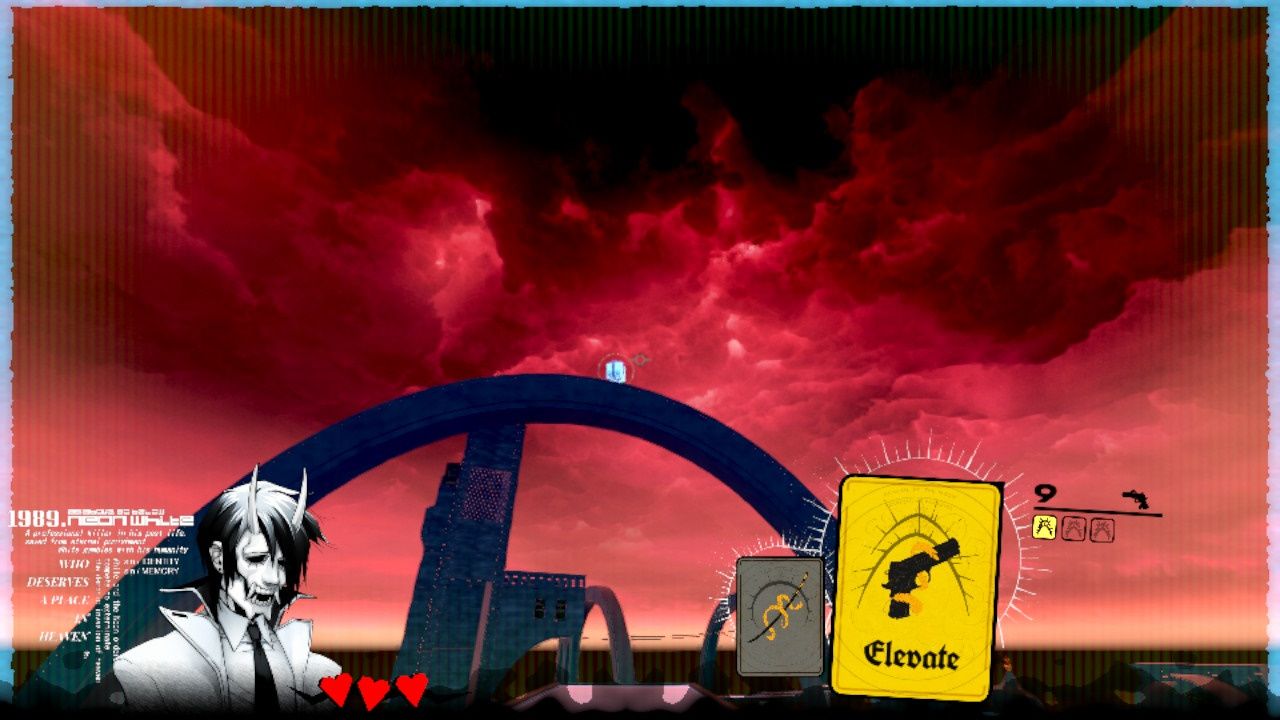 This stage's gift is found on top of the giant arch during the canal section at the end of the stage. Use the first handgun to get up to the next platform. Then, grab the next handgun card sitting in the canal. Now, turn around and face the giant arch. Jump toward the arch's outer side and use the handgun's discard ability to get on top of the corner of it. You can now just walk up to the gift and grab your new Lucky Cat Statue. 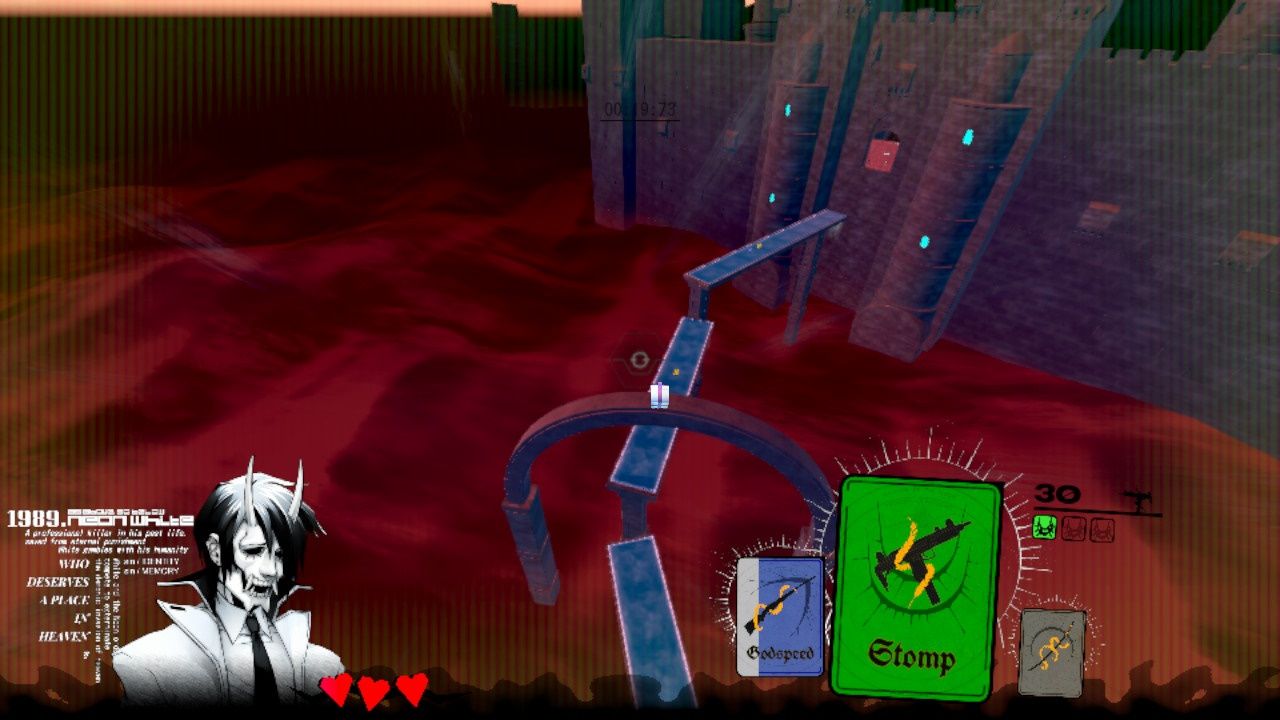 Alternatively, you could also just hold onto your sniper rifle, and shoot the red barrels up close at the beginning, propelling you into the sky, discard the SMG you obtained from the previous set of demons to slam down on the explosive barrels on the roof, and then use the sniper rifle's discard ability to boost on top of the arch from above. Either method will work. 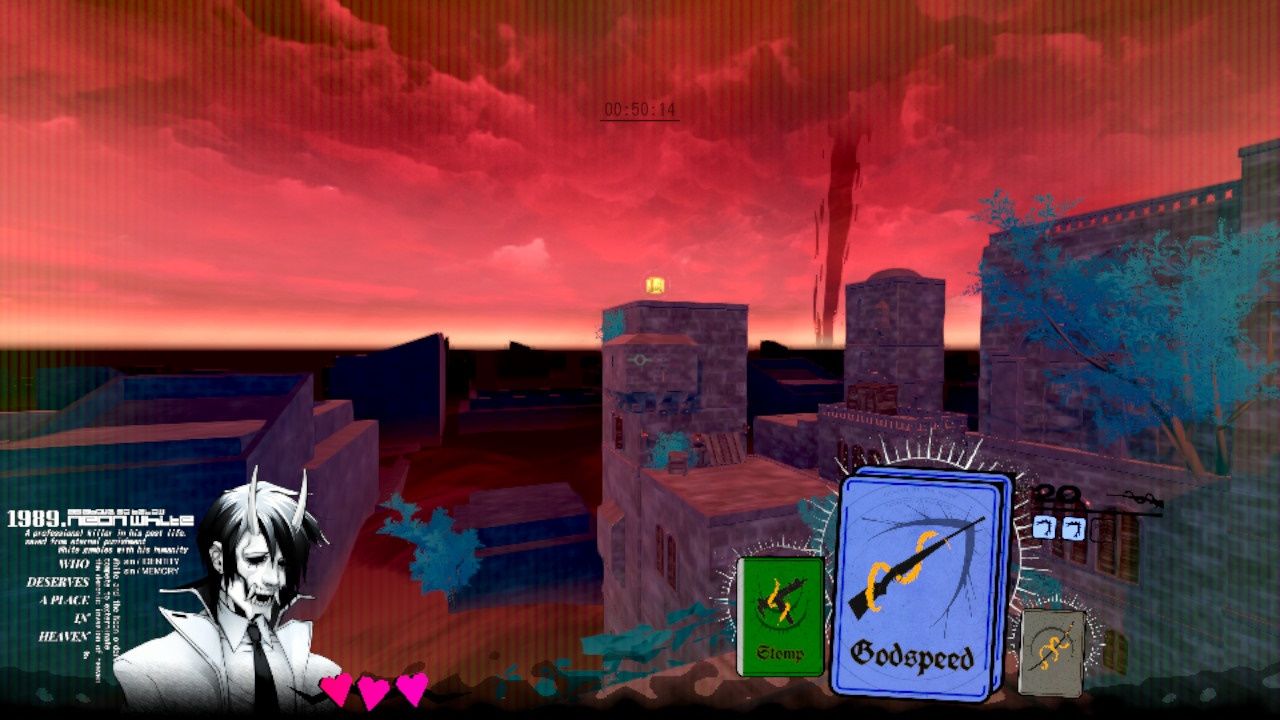 This gift is obtained at the very end of the stage. Once you know where it is, it won't much of an issue obtaining it. Just make sure you don't take the shortcut here, as that will leave you with fewer sniper rifles. 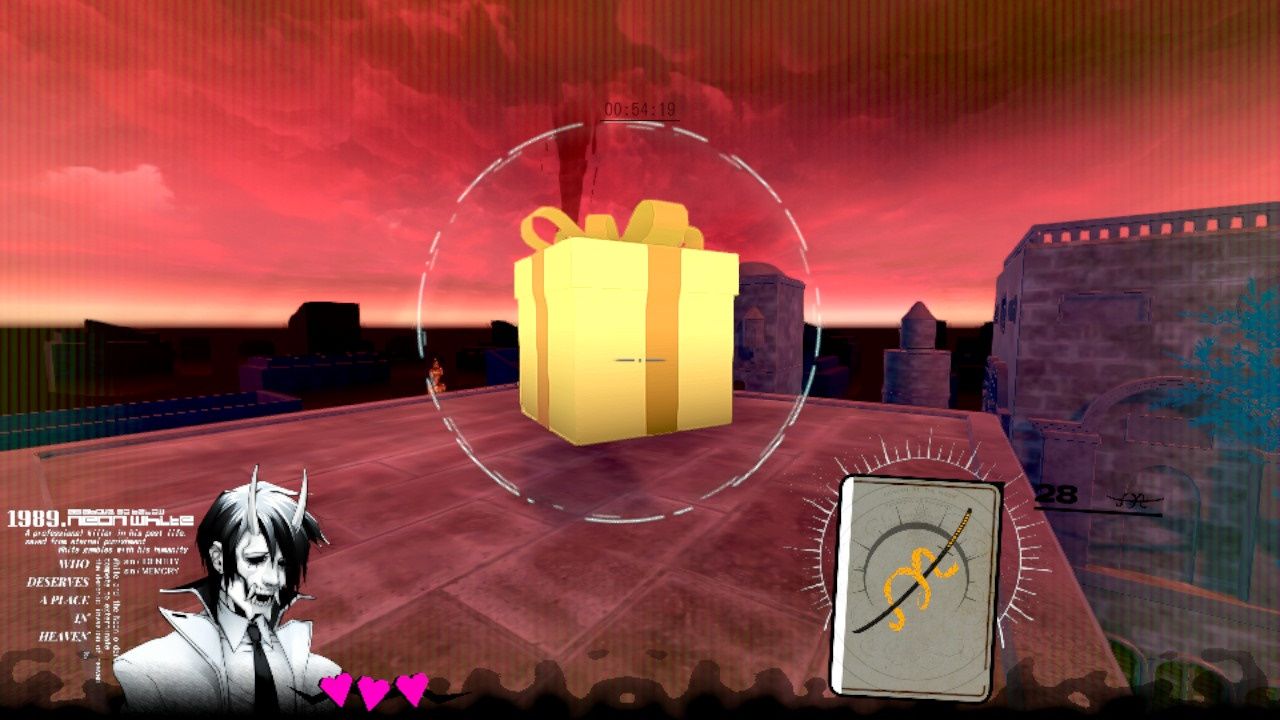 Instead, travel along the main path; you should finish the level with two sniper rifles without any extra preservation. Once you reach the stage's exit, look across the way, and you will see the gift sitting on the rooftop of the nearby building. Just jump toward it and discard your sniper rifle's to dash across the gap.

Mission 5: The Burn That Cures 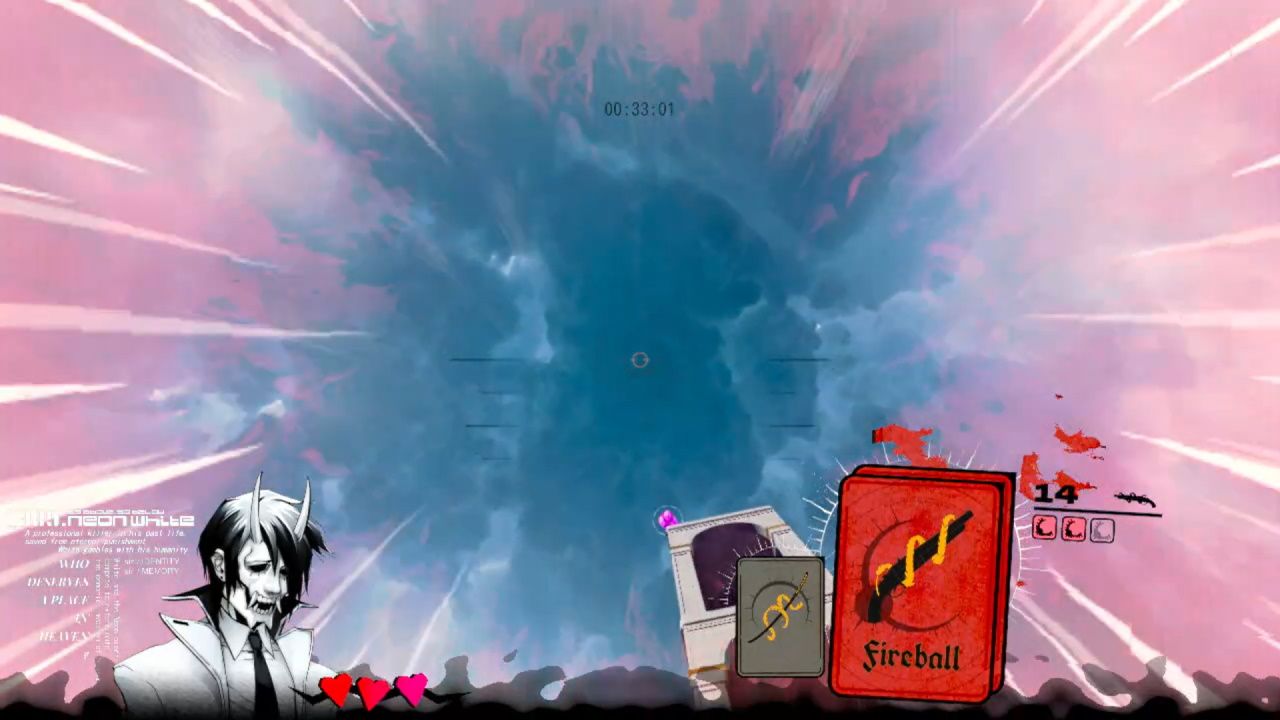 This is another one of those stages where the gift isn't particularly hard to get, but it forces you to approach the stage in a different manner, as you are going to need to stockpile shotguns. By the time you reach the final balloon demon platforming section, you need to have three shotgun cards on hand.

This isn't a problem, just don't take any of the shortcuts, and you should be fine (time is irrelevant here anyway). Actually getting the present is simple enough if you have the necessary cards. Just platform up the balloon demons then aim yourself at the sky and use the shotgun's discard ability ("Fireball") three times to make it to the roof of the tower. You will now be the proud owner of a Tattletail Toy. 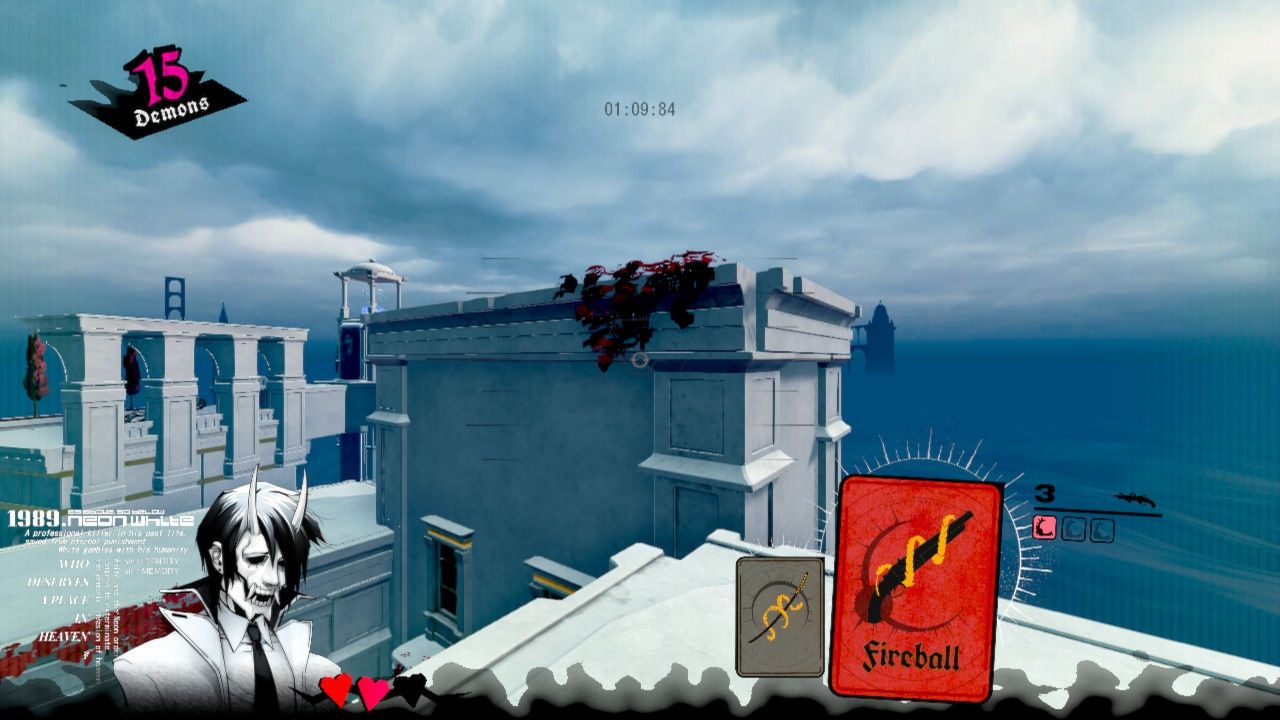 The gift here is on top of the tower at the very beginning of the stage. So, start the level by shooting the demon and grabbing the shotgun. Now, turn and face the area you just came from. You will see that there are a number of lower roofs leading to taller roofs. 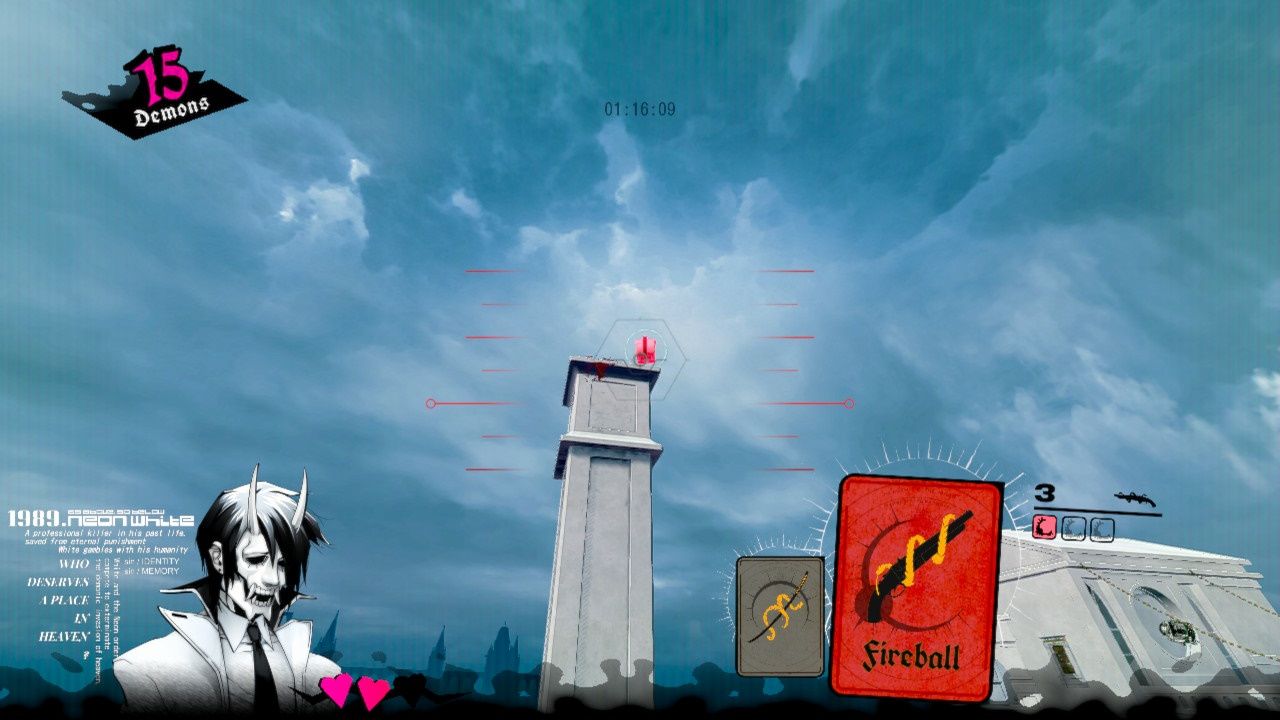 You are going to hop from building to building, making your way to the tallest building. Once you are there, use the shotgun's discard ability to reach the top of the tower. You will obtain the Perfume. 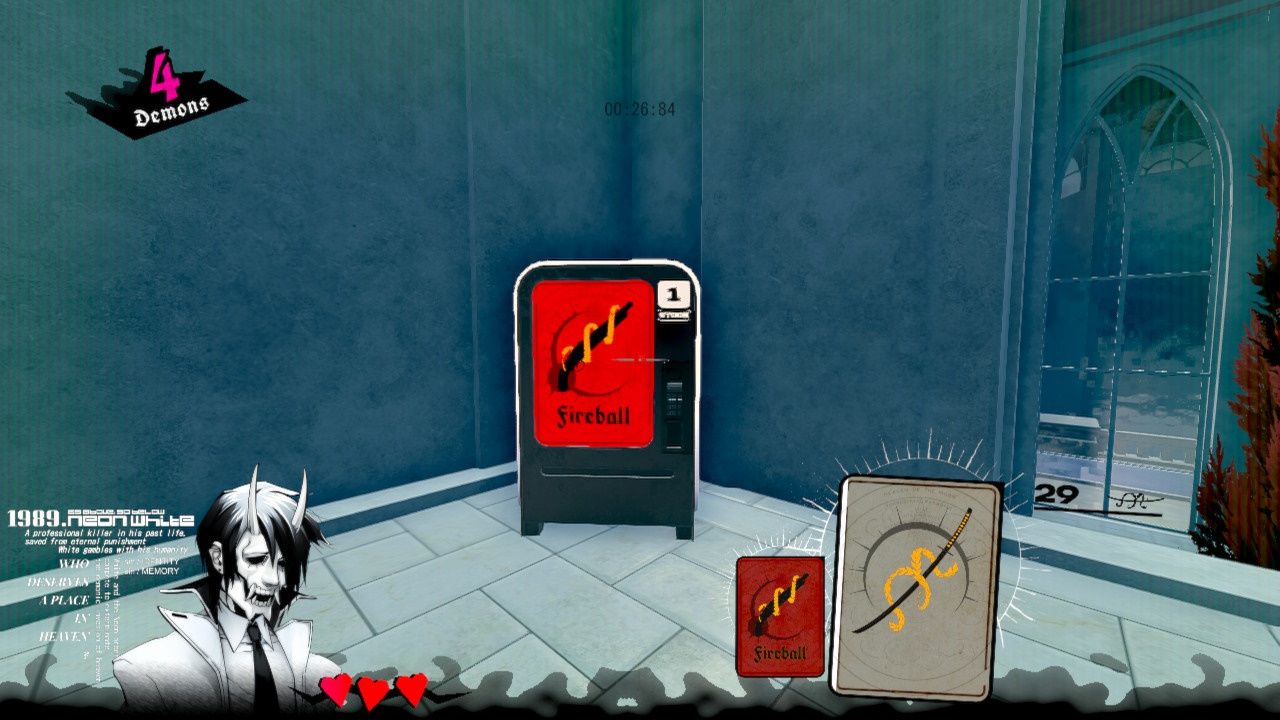 Once you know where this gift is, it is easy enough to obtain. Complete the stage as you normally would (you can take the shortcut if you like). Now, when you begin the segment where you are using the shotgun's discard ability to launch yourself through those breakable red panels in the ceiling, stop! There are two vending machines along the way that you will need to grab shotguns from. 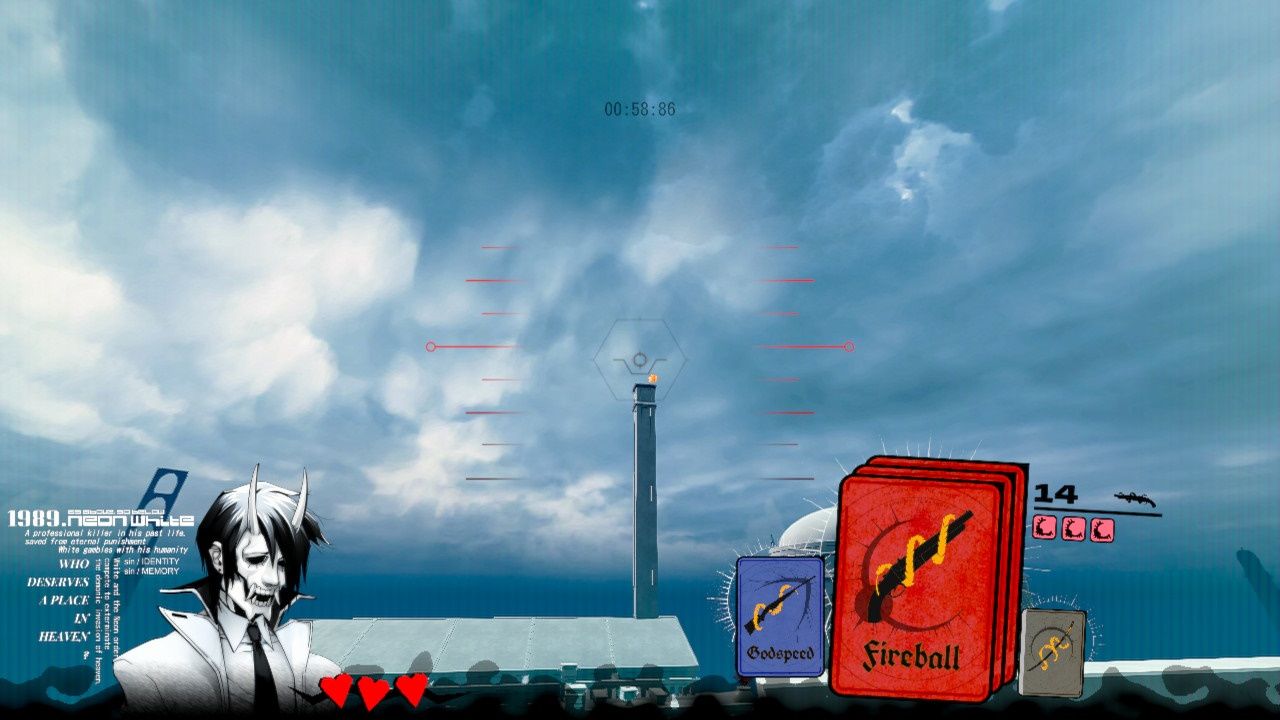 If you picked up the vending machine shotguns, you will arrive at the stage's exit with three shotguns. There is a blue demon just in front of the exit, take them out and grab the sniper rifle card. Now, if you look into the distance (behind where the blue demon was) you will see the gift. All you need to do is discard your three shotguns to gain some height and make your way closer to the present. Then, synch it with the sniper rifle's dash. Presto, you should easily grab the cigars. 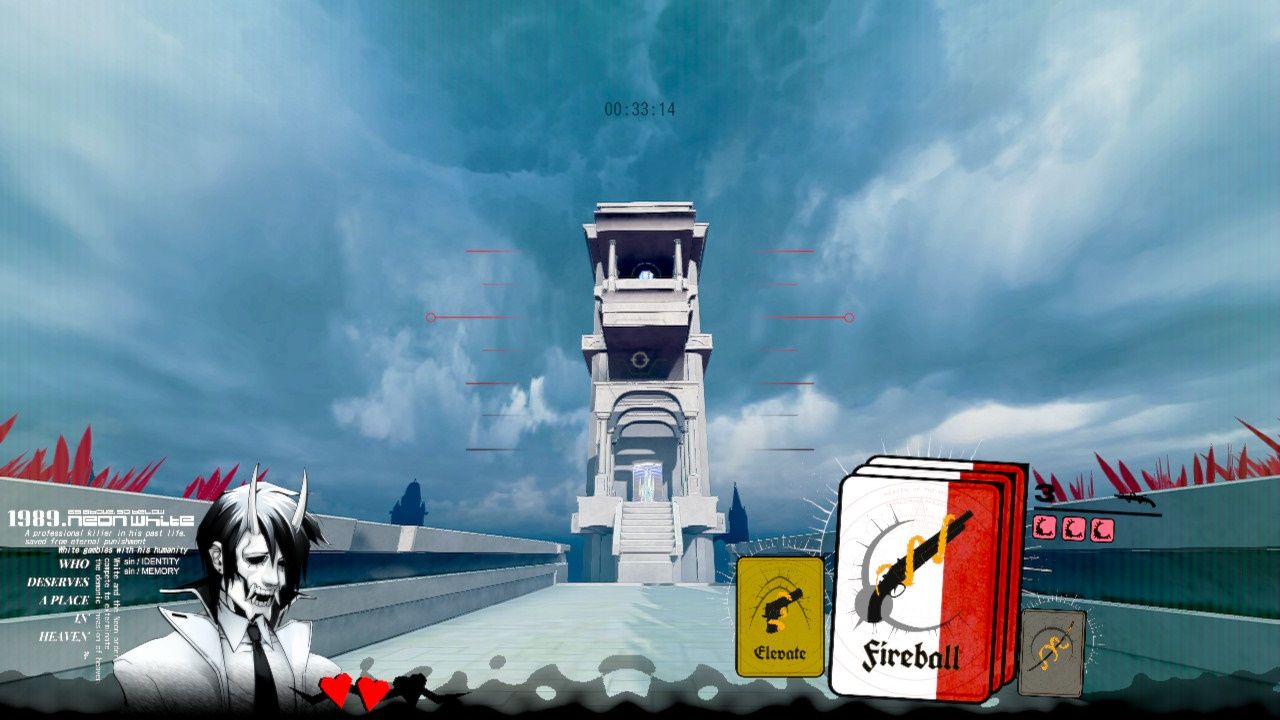 This is a super simple one. Just don't use your shotgun's discard ability unless you absolutely have to, choosing to shoot enemies instead. Once you get to the end of the stage just discard your shotguns to dash up to the room in the tower above where the level's exit is. 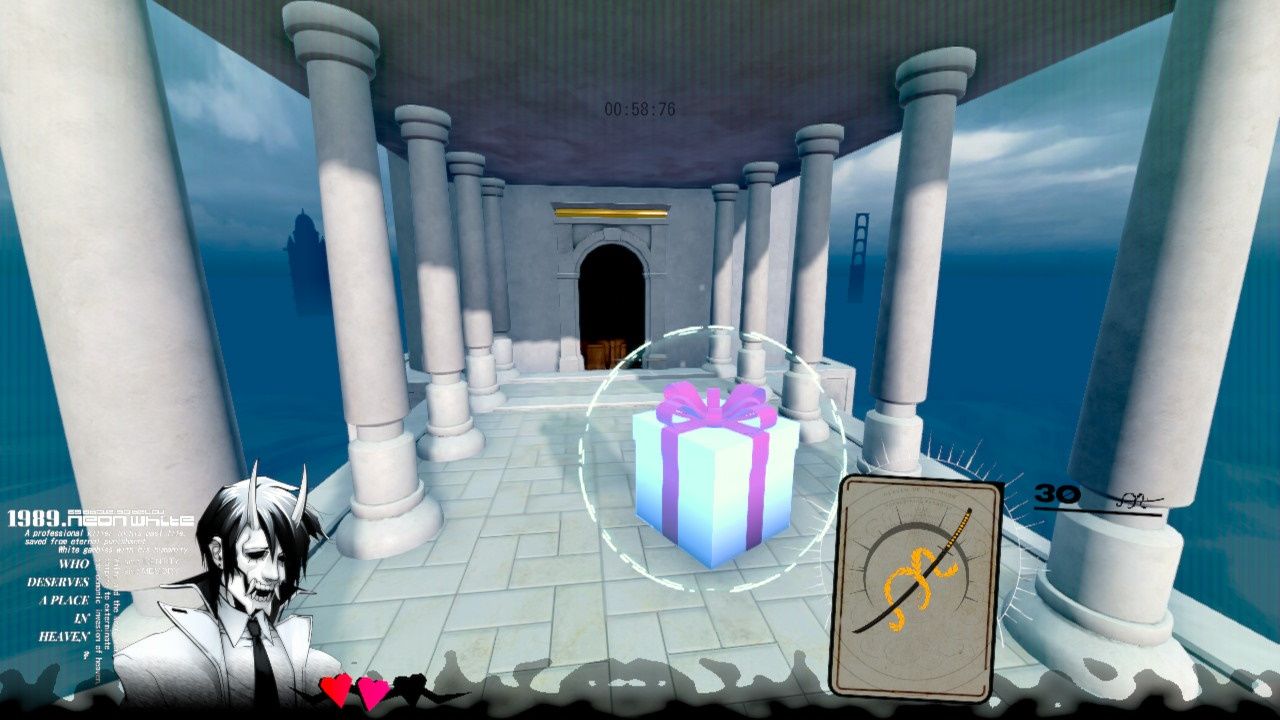 If you have been carefully preserving all your weapons, you can actually have a handgun (good for an additional double jump) at the end as well, making this section even easier. You will be rewarded with the Lucky Cat Statue. 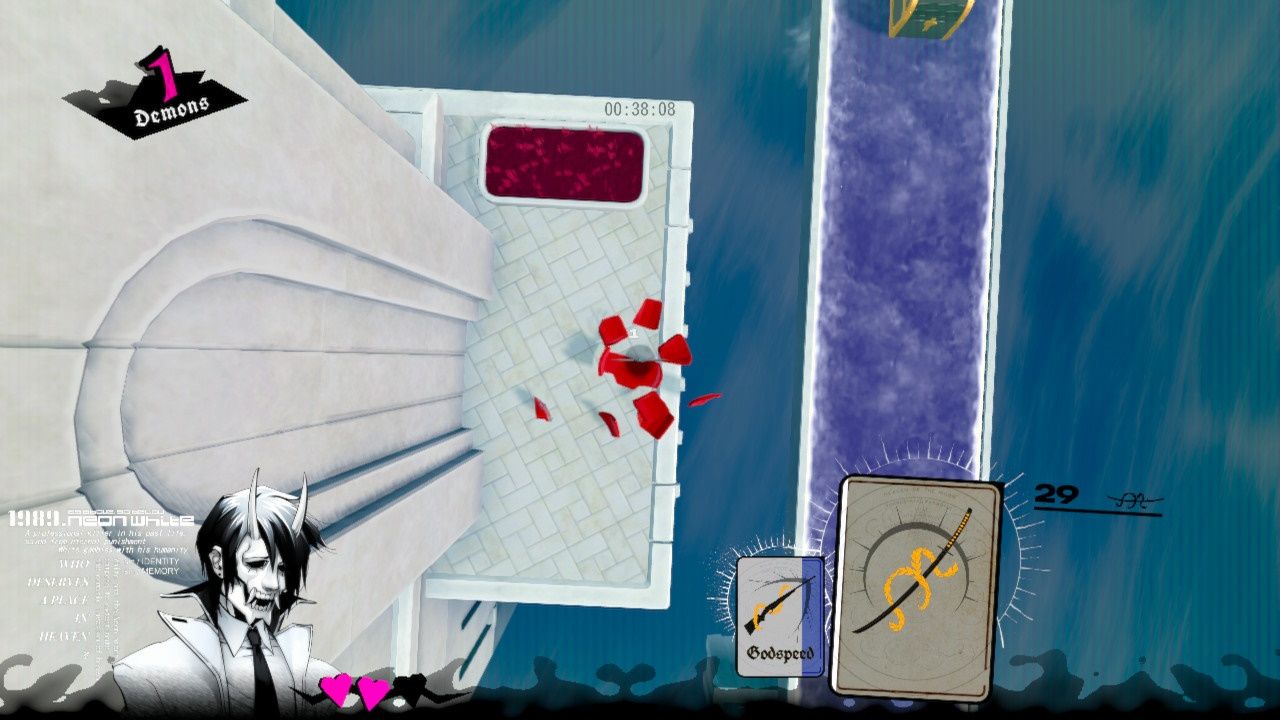 Play this stage as you normally would. Once you get to the end, make sure to not shoot the red barrel to your left. Now, grab the shotgun from the treasure chest. Jump on top of the red barrel and shoot it while in midair to get a bomb jump. Then use the shotgun's discard ability to dash up the rest of the way to the top of the building. You will get a bottle of Perfume. 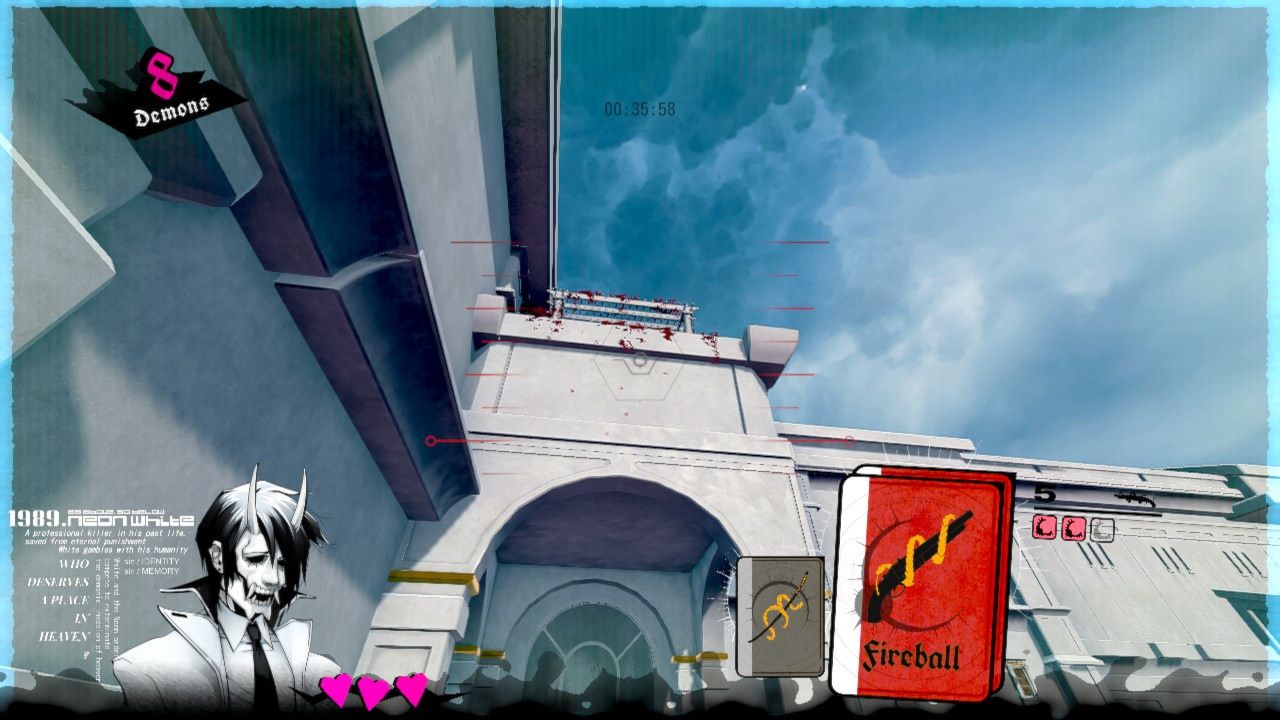 The present is actually just on top of the roof of the building right beside where you start the level. Getting it is a total breeze. Start by grabbing the shotgun, then kill the two lesser demons at the beginning of the stage with your sword. 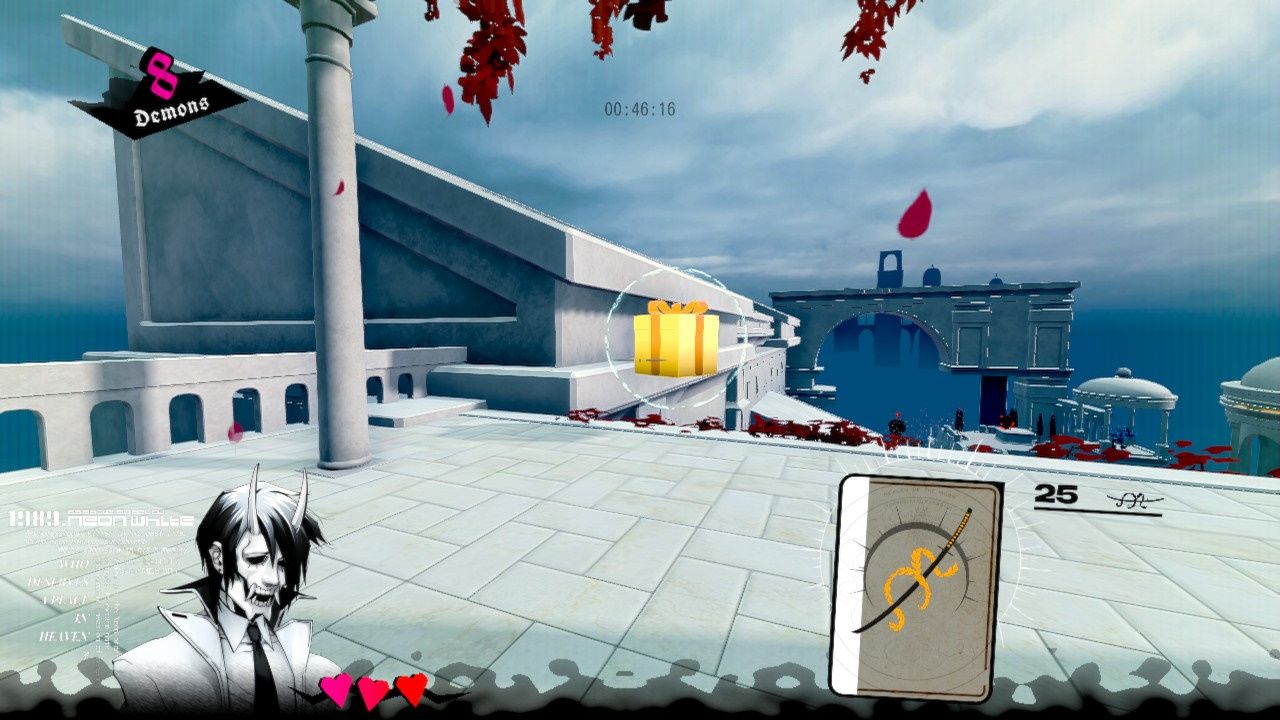 Now, jump across the gap and blast the giant head demon with your shotgun a point-blank. There is another shotgun card behind it. Grab that and head back to the beginning of the stage. Now, just fireball yourself up to the roof and you will grab the Six Pack. 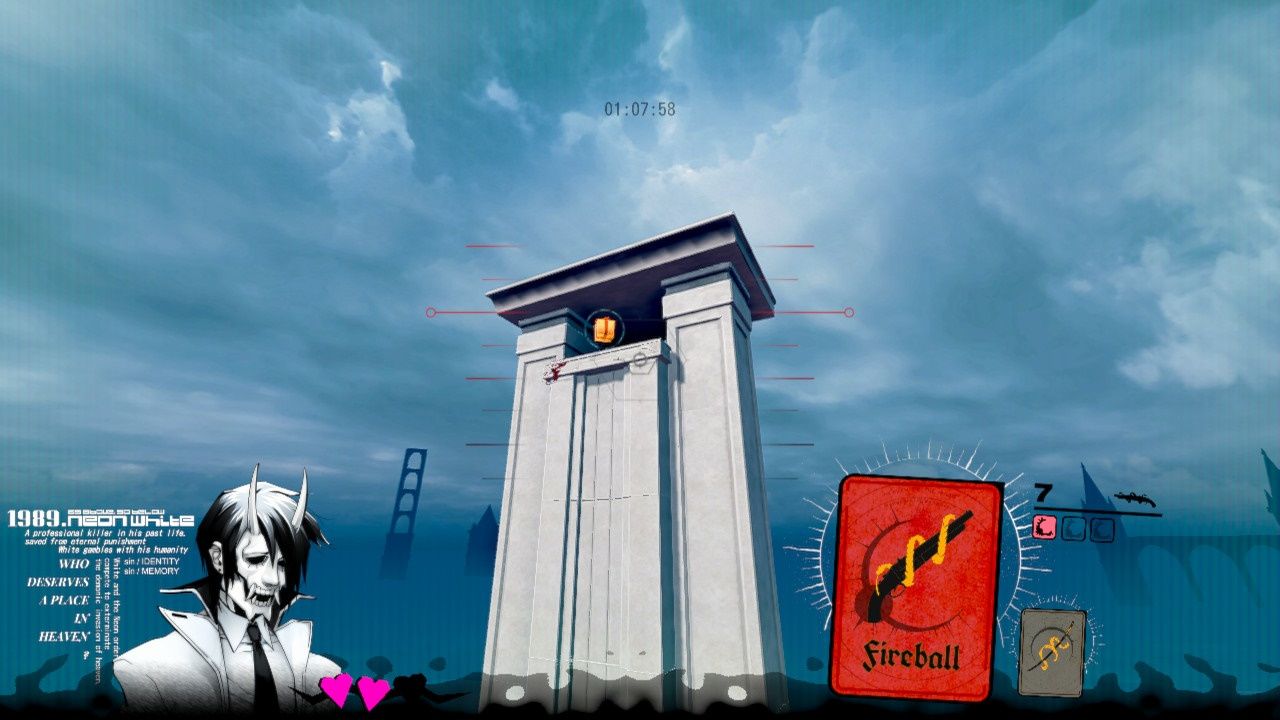 In order to get this gift, you need to get to the end with two shotguns and a sniper rifle. Don't burst through the door with the blue demon; go around instead. At the end of the stage, hop on top of red barrels, explode them and bomb jump. Use the fireball to get on top of the roof. Then, use the sniper rifle's discard ability to boost to the roof closer to the gift. All you need to do now is fireball your way to the Cigars. 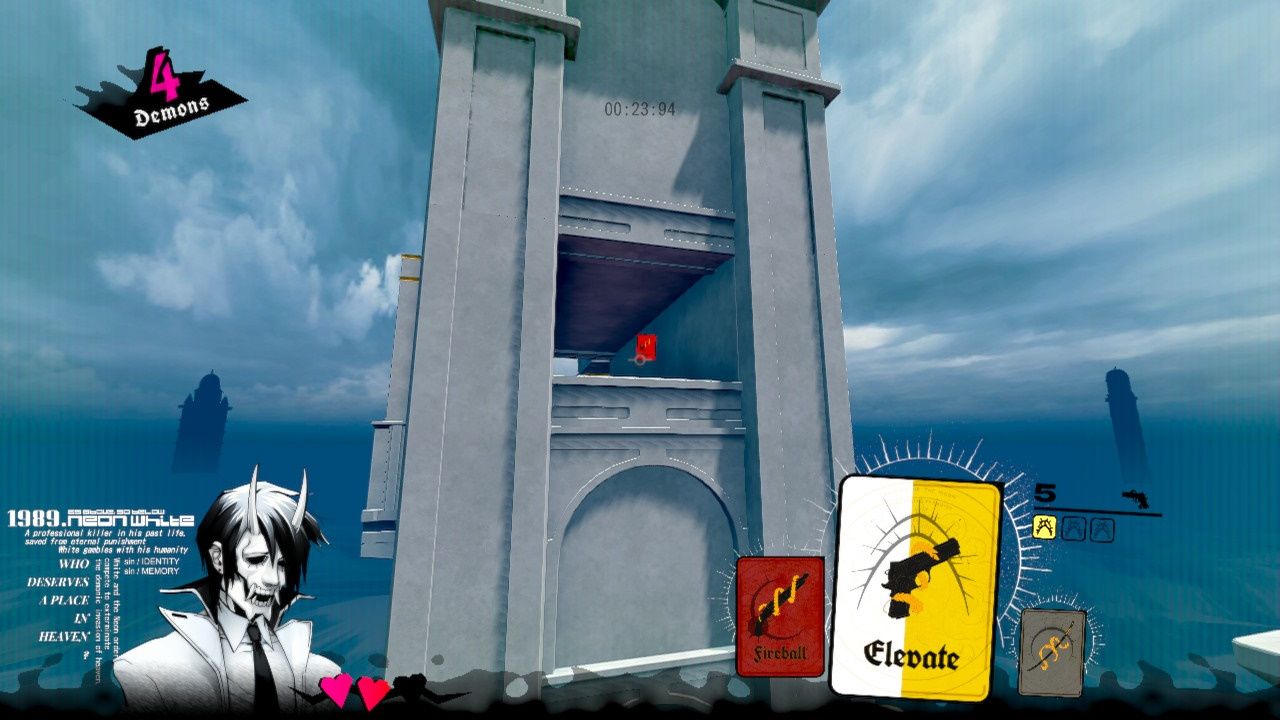 Once you enter the section of the stage that you get to by jumping on one of those balloon demons, you will be greeted by four enemies and a vending machine. Take out all four of them, but don't use any discard abilities and grab the pistol from the vending machine. 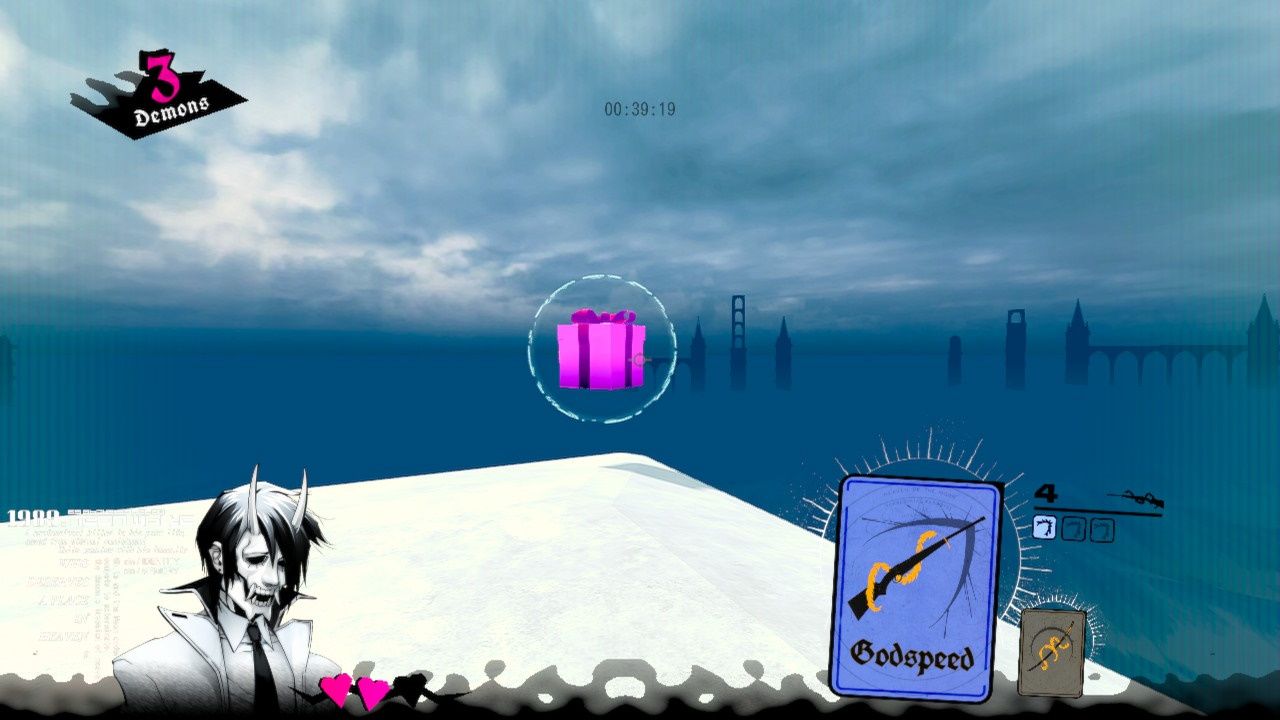 The present is sitting nearby on top of the structure with the shotgun sitting inside of it. You simply need to use the handgun to hop over to that shotgun, then discard the two shotgun cards you have, to propel yourself to the roof of the building. From here you will acquire the Tattletail Toy. 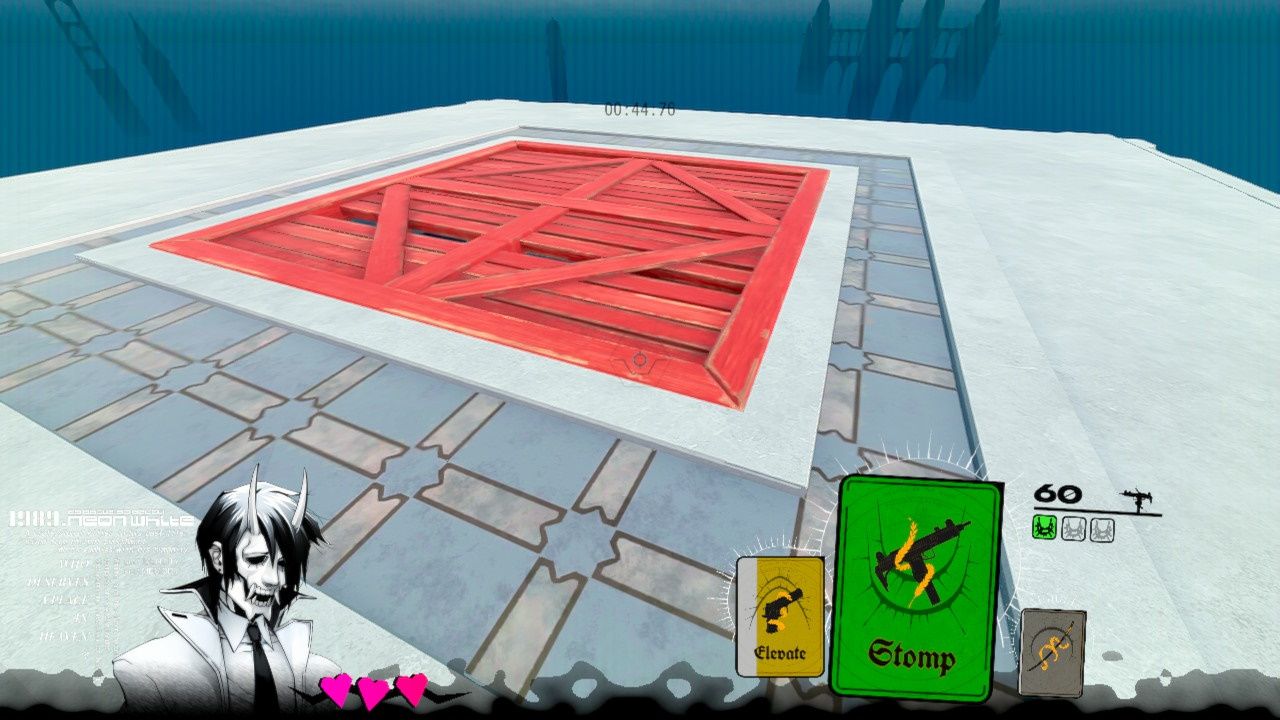 This gift is an absolute gimme as long as you follow one golden rule: don't slam down. You will need three SMGs at the end of the stage, so just avoid using the discard ability, and you will be fine. Instead, just shoot the red barrels to get your bomb jumps. It isn't as fast, but when chasing gifts speed is irrelevant. 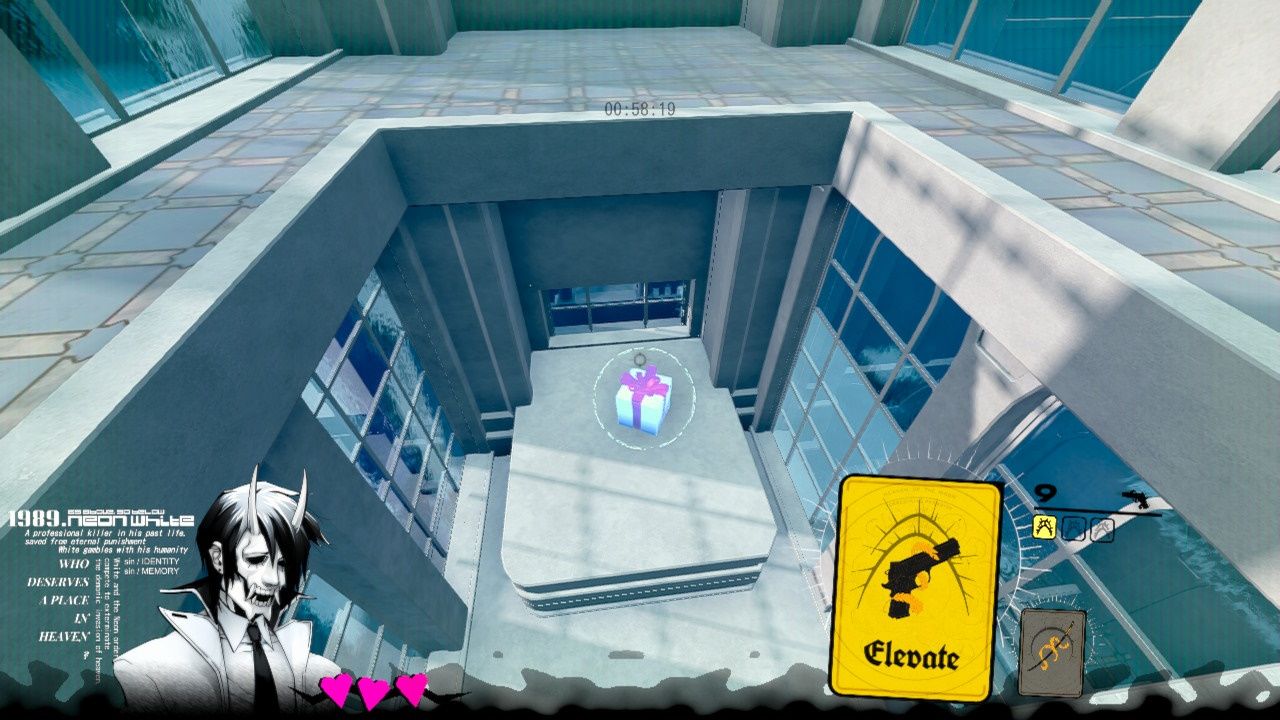 Otherwise, complete the level as you normally would. At the end of the stage, you will do a bomb jump (once again, without using the SMG's discard ability) and it will propel you to the roof of the tower you are currently in. Look for the trapdoor on the roof. Now you just need to use your three SMGs to break through each subsequent trap door, and you will earn a Lucky Cat Statue. 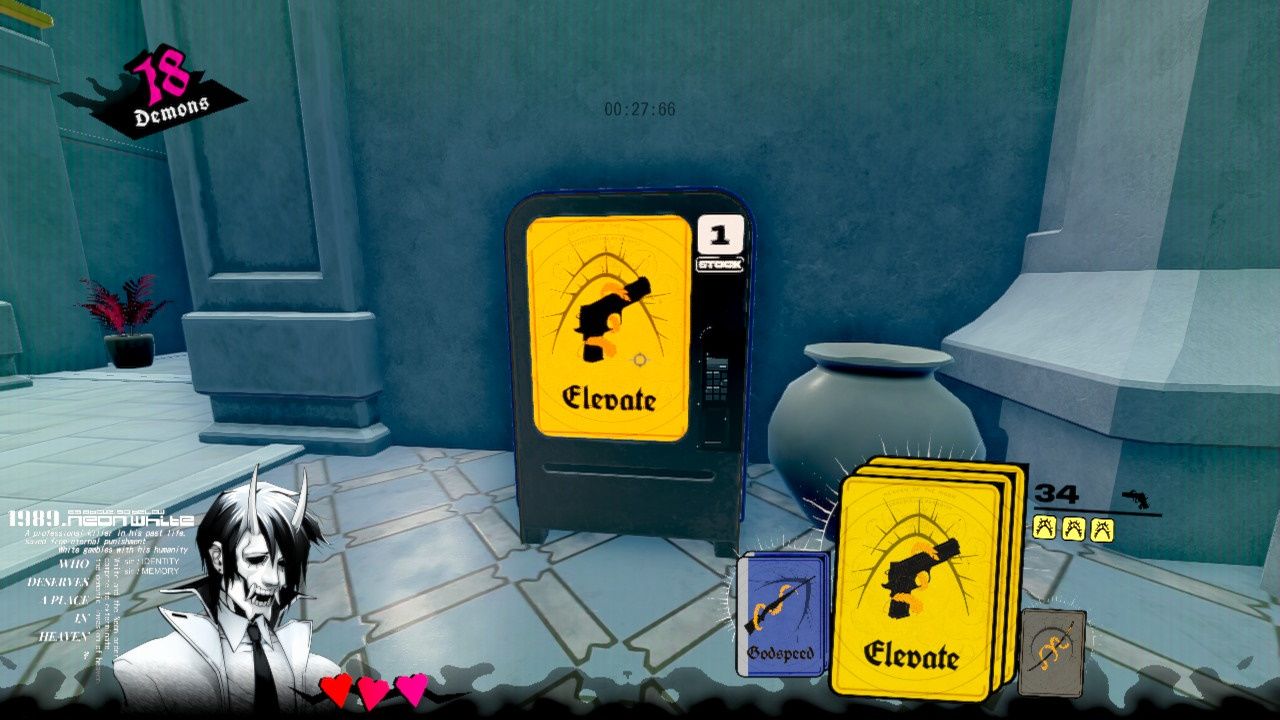 In this stage, you are going to be climbing a bell tower. Once you get to the top, the gift is hovering below the bell itself. All you need to do is stockpile shotguns. When you need to make jumps, use the assault rifle's discard ability to get a bomb jump. 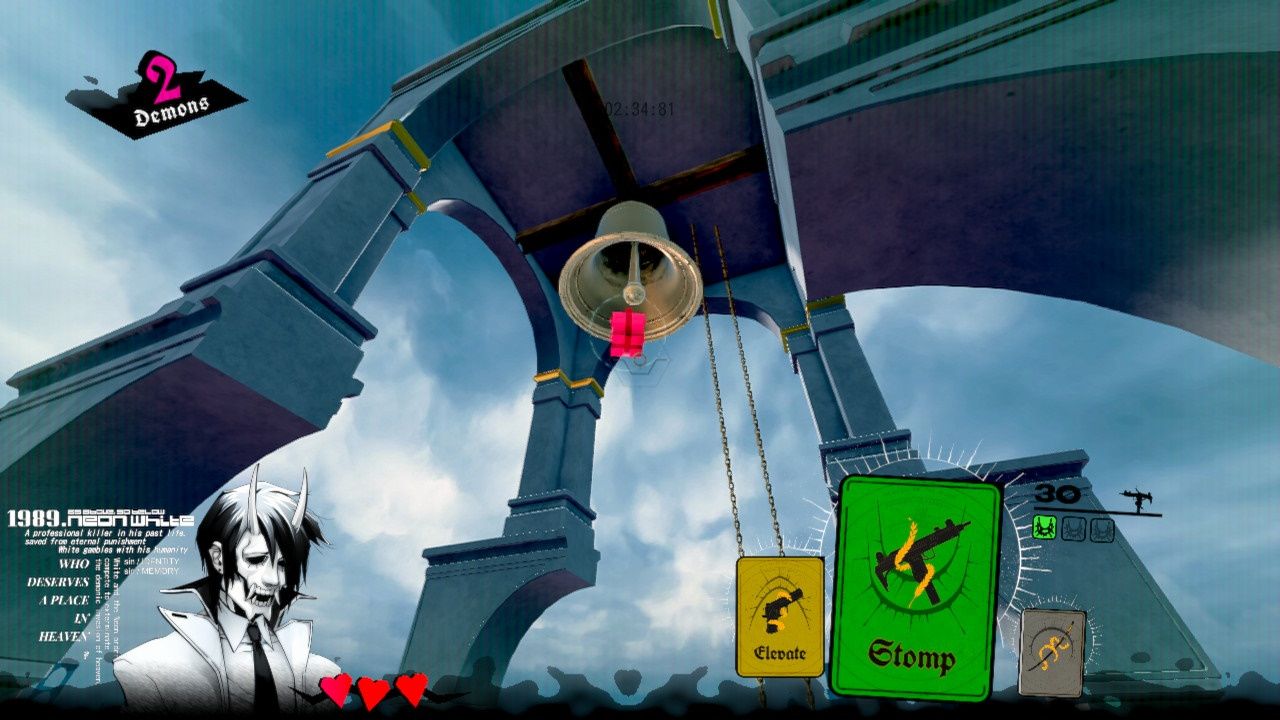 There is also a handgun vending machine, so hit that up as well. Once you get to the top, discard your shotguns to fireball your way up to the present. With that, you will grab hold of the Perfume and the final gift in this mission.