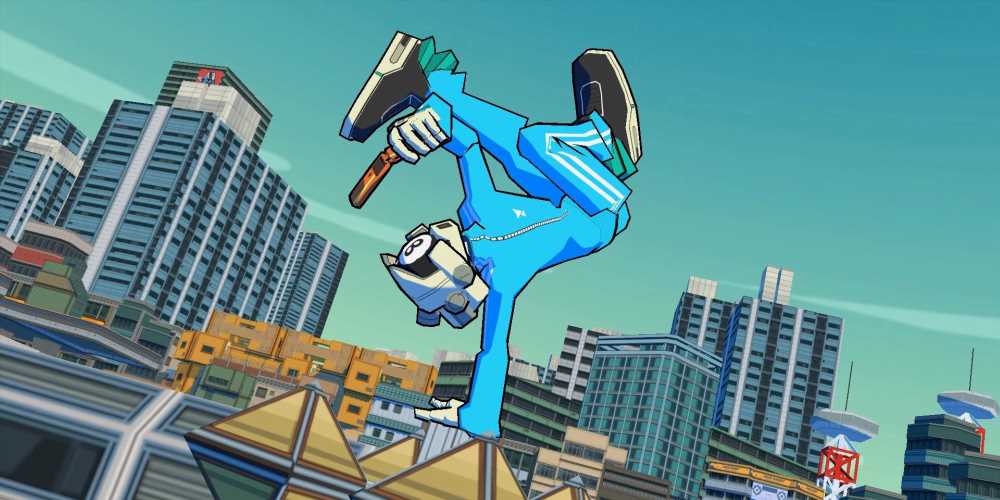 Last time we heard from Team Reptile and its upcoming game, Bomb Rush Cyberfunk, we found out that the robotic-headed protagonist might actually be on the warpath against the city government to regain his cranium. And to do that, he’ll need to take over the city by aligning the five burrows.

Four months later, Team Reptile is once again teasing their spiritual successor to Jet Set Radio with another trailer showing off Bomb Rush Cyberfunk’s sick moves and funky fresh soundtrack. Bx'treme wrote the track you're hearing as you witness the robot-headed one grind rails and skate off walls thanks to his Boostpack–a jetpack that lets each character in Bomb Rush Cyberfunk perform tricks that would normally land even the best pro skaters on their heads.

Next, we get to see a BMX biker with a ring on his back perform similar tricks while flipping through the air, while the blue-haired girl on skates brings us home.

"Wherever you are from, chances are you grew up going out to the local skatepark, scratching your name on the bins at school or hanging out at the mall, dancing, before heading back home to do some extreme tricks in your favorite video game," wrote director Dion Koster in the latest video's description. "Bomb Rush Cyberfunk is a big street culture symphony of these feelings. In that spirit I have decided to include skateboarding, BMX, and inline skating in the game."

Koster also let us know that how you traverse the city is as important as doing it in style. "Many secrets can be found by getting points and doing combos throughout the stage," said Koster, although you can still switch back to sneakers on pavement if you'd prefer a more sedate tour of the streets.

Bomb Rush Cyberfunk is coming out sometime this year; first on the Switch as a timed exclusive, and also on Steam for PC. After that, we'll likely see the game ported to PlayStation and Xbox, although we haven't gotten an official word from Team Reptile on that front.