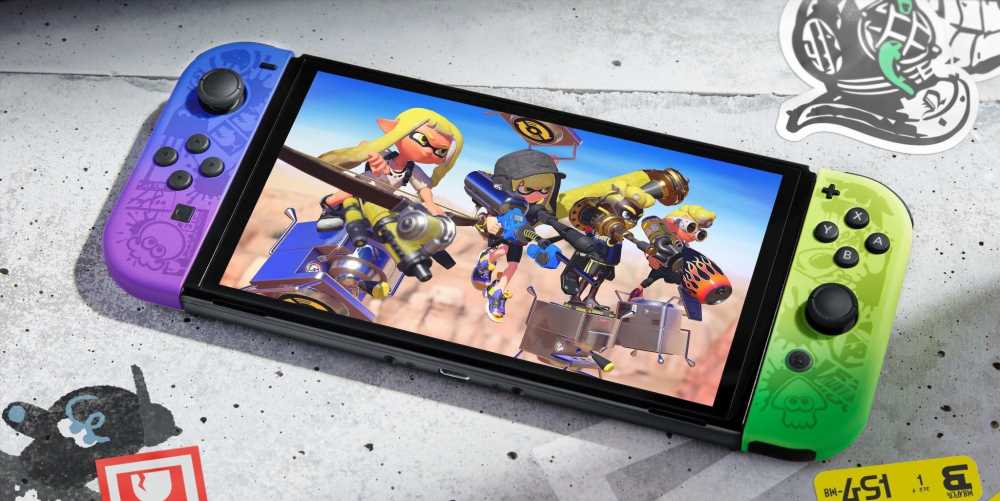 Splatoon 3 is coming to Nintendo Switch later this year. Right before the latest installment in the series arrives, Splatoon fans will be able to get their hands on a special edition, Splatoon-themed OLED Switch. Even better, on launch day two weeks later, accompanying accessories, including a Pro Controller and carry case, will launch alongside the new game.

Nintendo revealed the special edition console via a short trailer which you can check out below. Similar to other themed Switches that have launched in the past, the Splatoon OLED model is covered in a pattern featuring various characters and elements from the game, including plenty of Inklings. The Joy-Con that come with the console are the shades of yellowish green and purple most commonly associated with the series.

Those colors clash with the OLED console's dock somewhat, which remains white like the base model, but they're the only colors that really make sense for a Splatoon theme. There's an additional splash of yellow on the deck which is also covered in the same pattern as the console and the Joy-Con. The same goes for the back of the console which is black.

The pro controller that was revealed shortly after the console sports a simiar color scheme. Black in the middle with yellow and purple handles, though the all over pattern has been replaced with simple splats on the black area and nothing on the handles. Last but not least, the case you'll carry it all in if you're a big enough Splatoon fan to fork out for all of the above is the same shade of white as the OLED dock with a Splatoon-yellow zip. No word yet on how much each individual item will cost, but the console launches on August 26, and the other items will be available on Septemmber 9, Splatoon 3's release date.

News and details regarding what to expect from Splatoon 3 continue to filter through from Nintendo as one of its biggest launches of 2022 draws closer. A first look at the series' new Squid Research Lab stage was offered up earlier this week, and last week Nintendo revealed you can choose what your Inkling's eyebrows will look like.