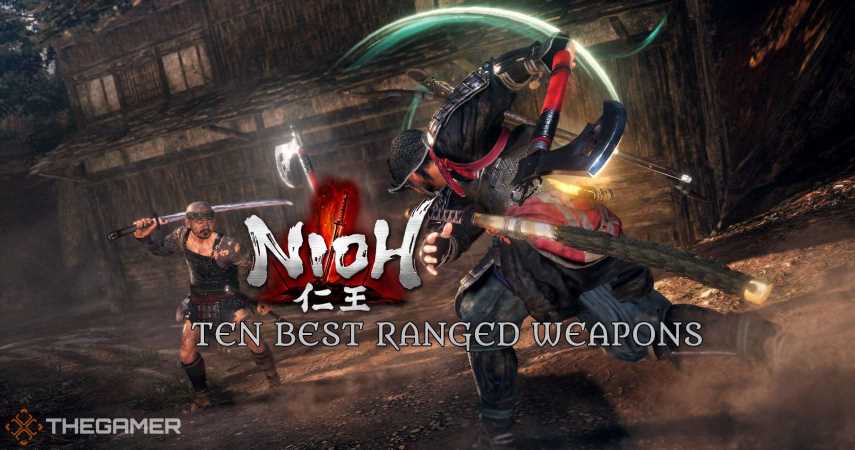 Action game Nioh is not just cutting and slashing. There is a fair amount of shooting and exploding, as well. Being at low health and using hand cannons to finish off certain enemies is a valid strategy, as is using the bow to lure an enemy to a better arena.

Bows have easy-to-find ammo, rifles have real cost-benefit, and hand cannons have great damage. Each weapon type has a reason to be there. There are plenty of weapons in the game, and many with random statuses that might be really useful, but knowing the best base statuses of a weapon might help players decide what weapon to craft, keep, or sell.

Warrior Of The West Bow 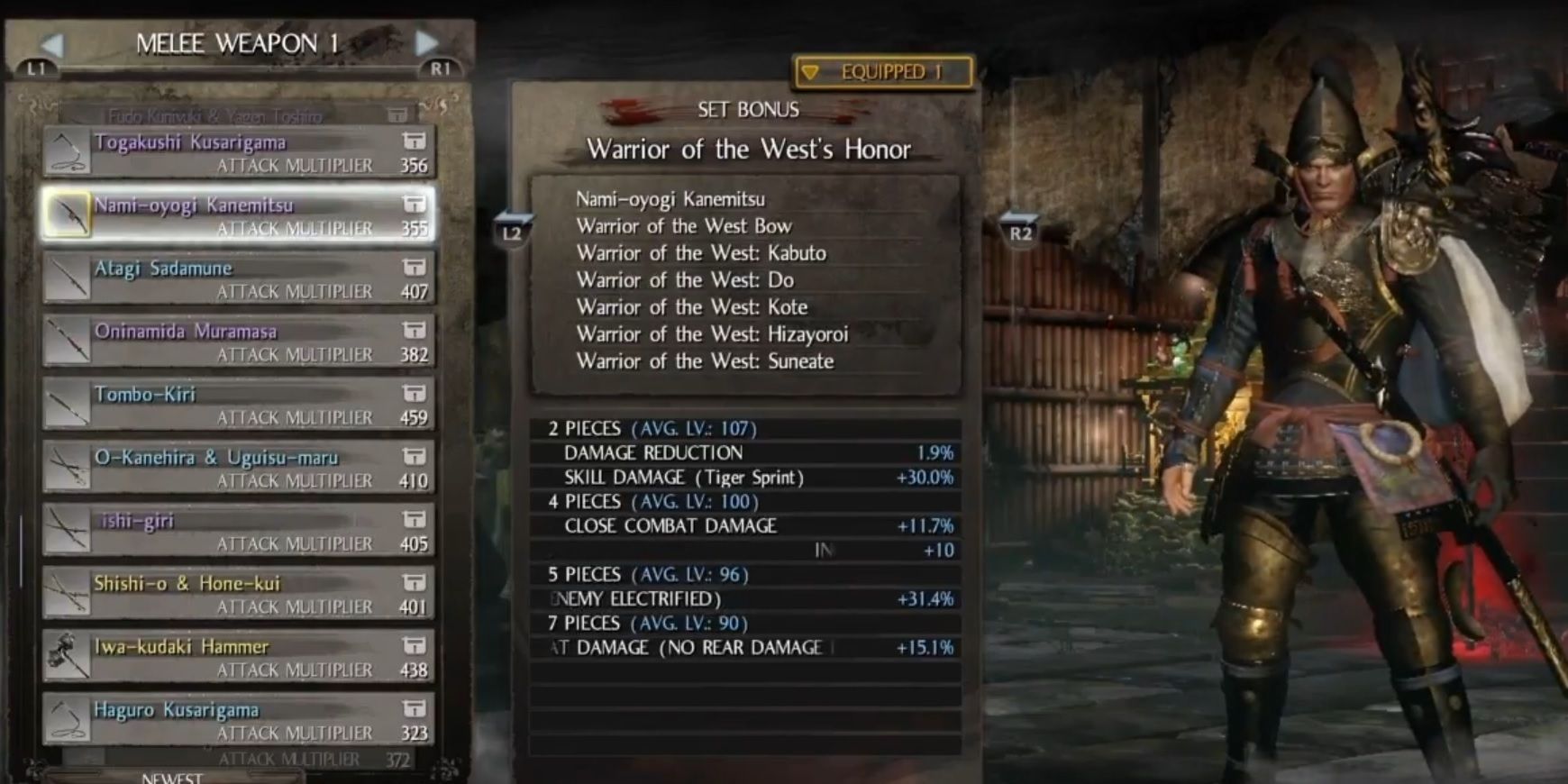 This is said to be the favorite longbow of Tachibana Muneshige, who was praised as the Warrior of the West by Toyotomi Hideyoshi. All bows scale the same way, and this one does not make it into the top three bows with the best attack multiplier.

It might not be the best on its own, but it does have good base damage. What makes this bow special is being a part of the Warrior of The West Honor set, one of the best sets of the game. This means it will grant damage reduction and bonus damage even if the player only has two of the seven pieces that belong to the set. 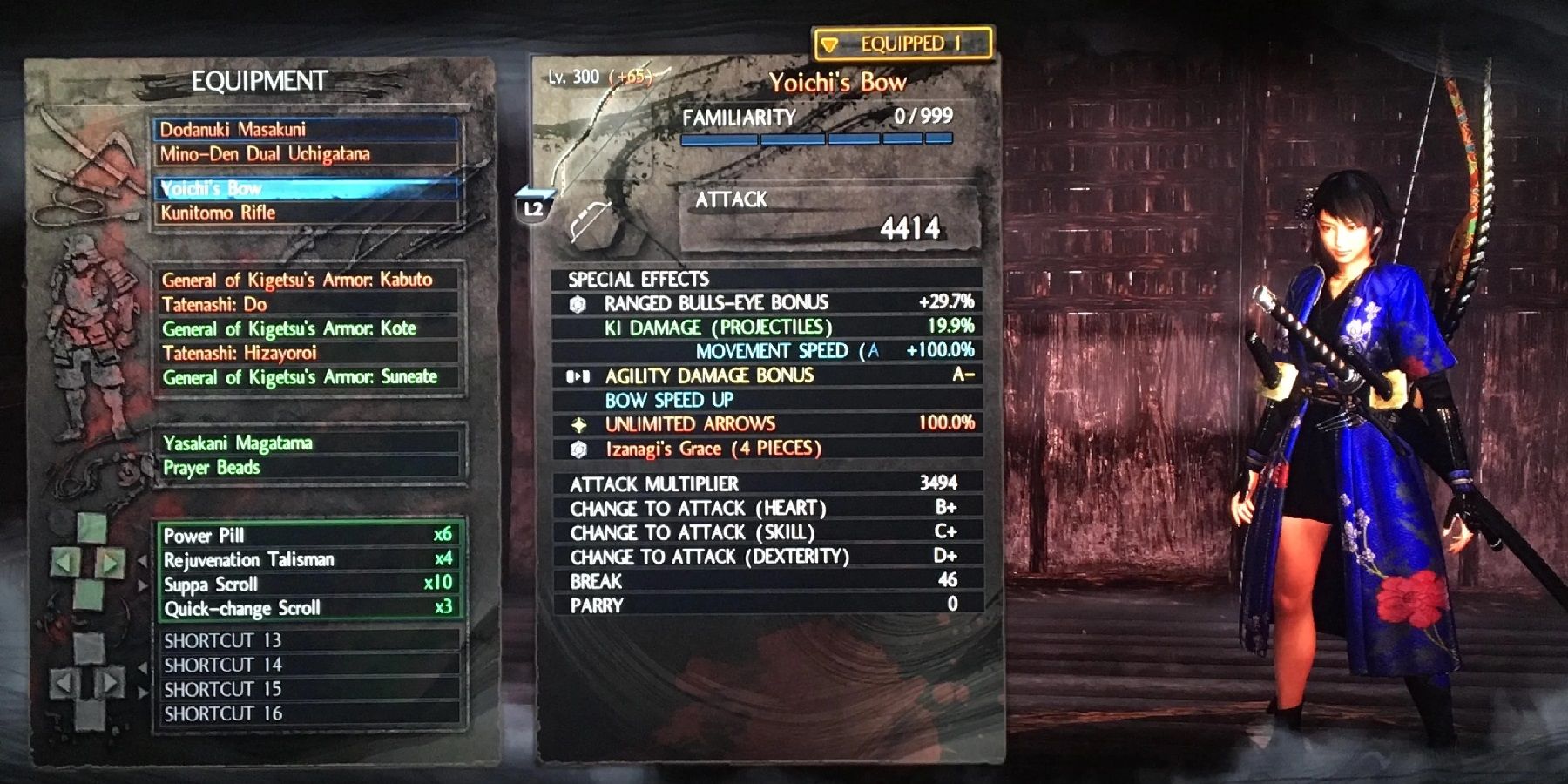 We learn from the in-game description that this was the favorite bow of Nasu-no-Yoichi, a warlord who fought in the Genpei War. Yochi’s Bow is one of the bows in Nioh that has the highest attack multiplier of its weapon type, but the greatest thing about it is the Special Effect that this weapon has.

The weapon description says that “the feathered designs that extend out along the limbs from the grip serve to stabilize the bow.” In game mechanics, this translates to the 20% to 30% bullseye bonus damage that this weapon has. 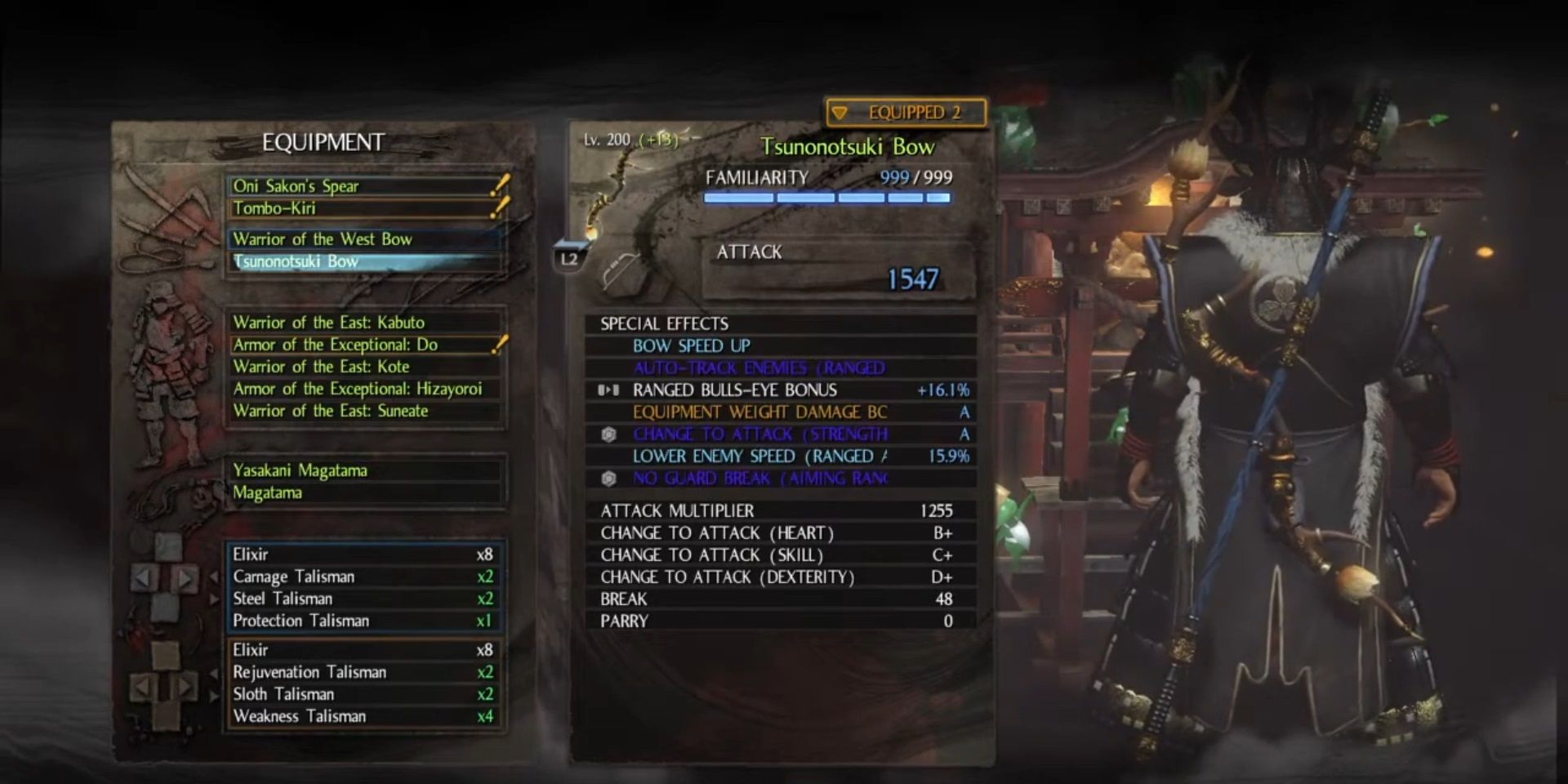 There are many stories about this bow. The in-game description says that a legendary bow wielder received it from the thousand-armed Kannon. It was the bow used to pierce the left eye of the Demon known as Konheika and was also used to slay the demon god Akuro.

This bow has the third-highest attack multiplier among the bows of Nioh, but this is not its best feature. Tsunonotsuki Bow’s damage scales with Strength. That alone is the most important effect that, depending on the build, makes this bow amazing. This is a solid bow to carry when challenging the hardest twilight missions. 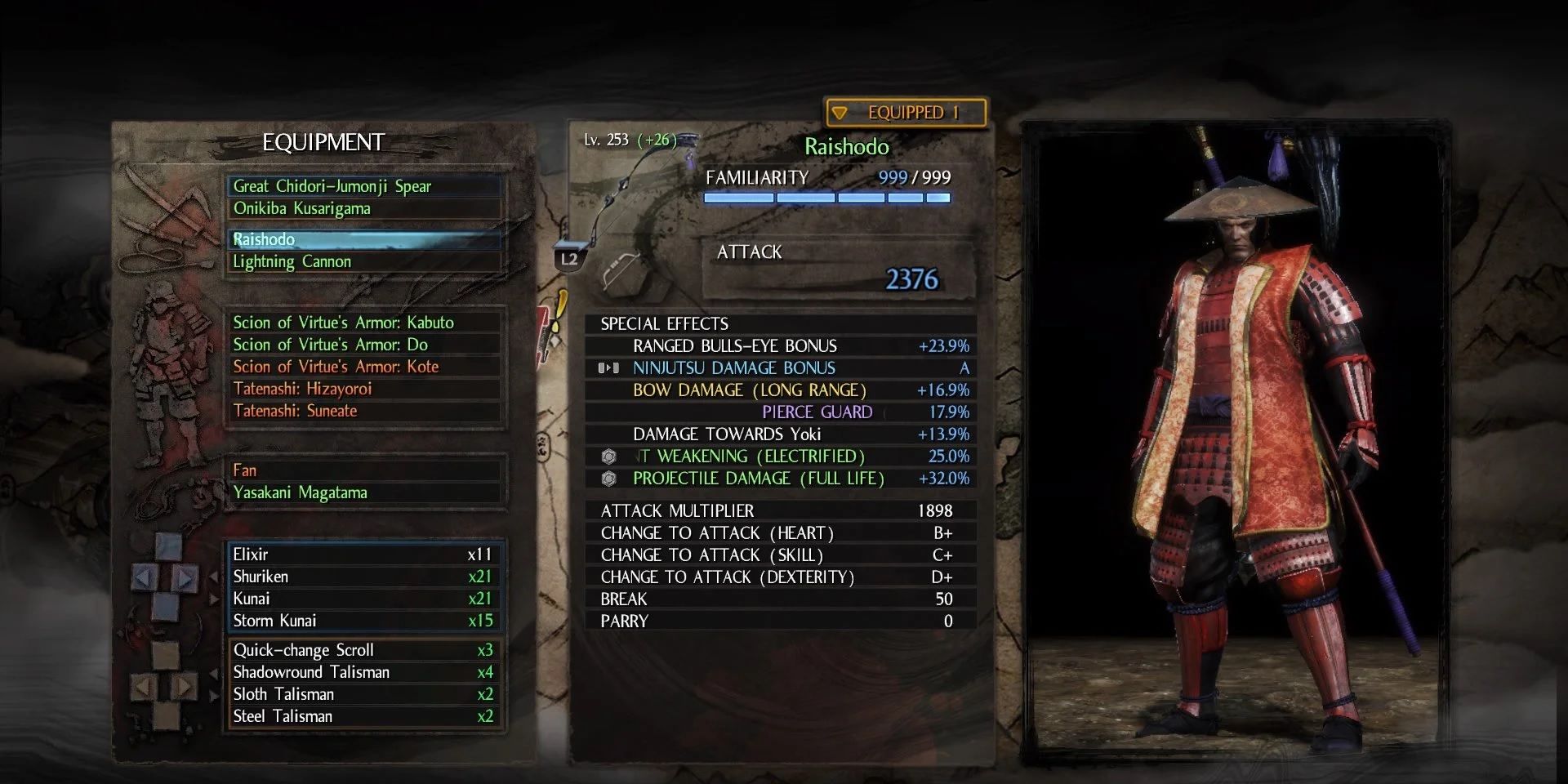 The in-game description says that this bow was used by Yorisama. He was commanded to slay the Nue that was terrorizing the capital every single night. A Nue is a yokai with the face of a monkey, the legs of a tiger, and the tail of a snake. It is said that with this bow, Yorisama defeated the creature effortlessly.

Raishodo is the bow that has the second-highest attack multiplier. Additionally, it has at least two special effects: Status Ailment Weakening — Electrified, and an extra 27% to 32% damage dealt when the wielder is at full health. 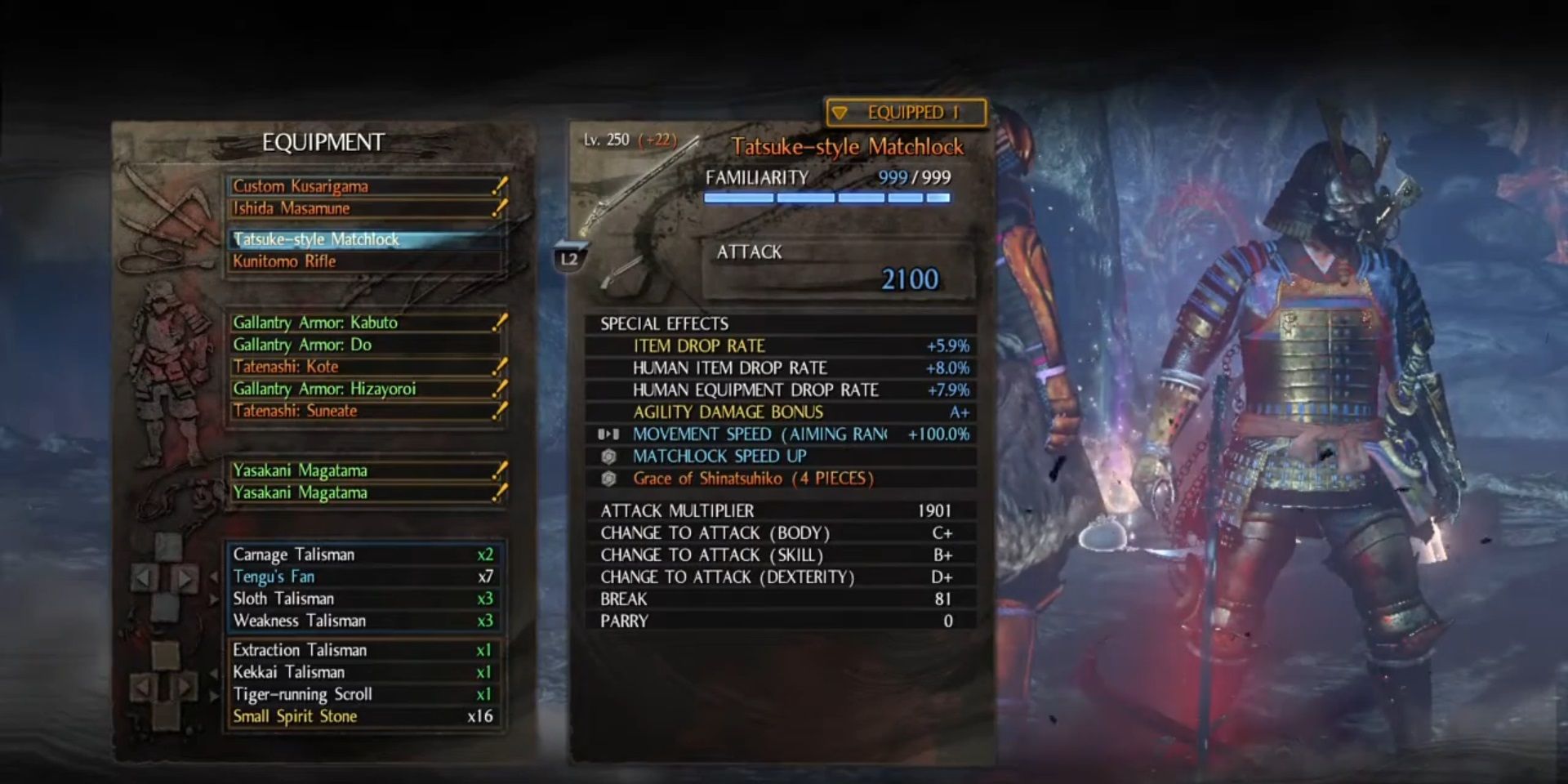 The in-game description of this item says that it was widely used in the Tatsuke style of firearms. The founder of the Tatsuke style was a famous firearms specialist who served both the Edo Shogunate and the legendary Tokugawa Ieyasu.

As a weapon in the game, it has the highest attack multiplier of all rifles. Although players can try reforging it to get the Matchlock Speed Up effect, it is quite hard to do so. Still, it might be a good weapon if for those who have the right effects on it, and the base damage is pretty good, too. 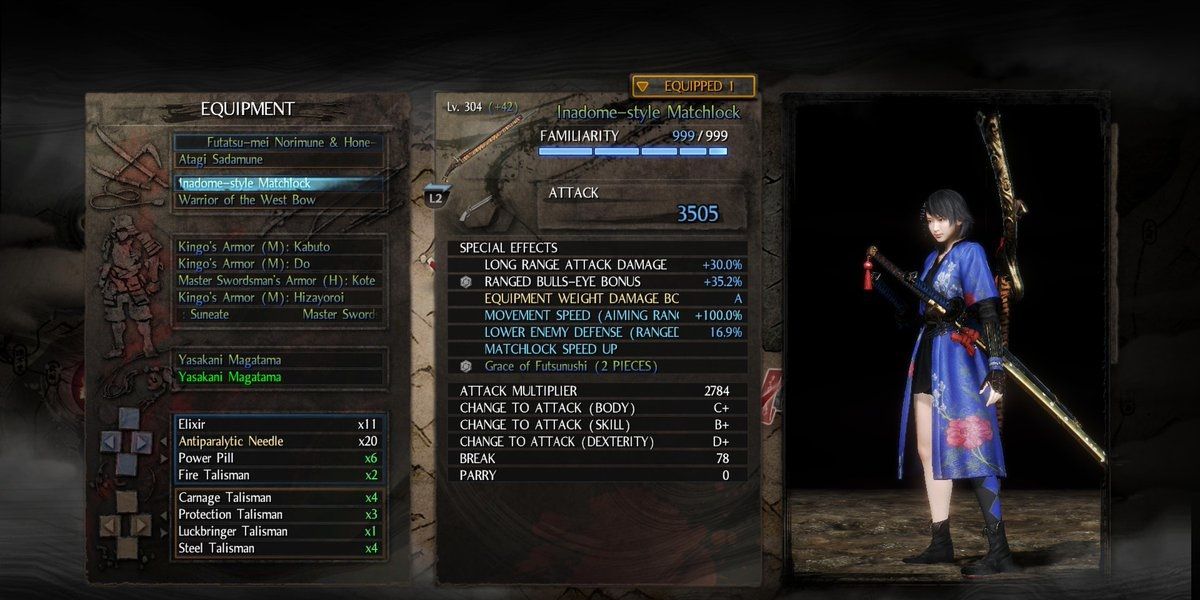 This rifle’s in-game description is not very different from the Tatsuke-style Matchlock’s. According to the descriptive texts, this kind of weapon is widely used in the Inadome style of firearms. The founder of this style was also a famous firearm specialist named Inadome Sukenao. He and Tatsuke Kagesumi are two of the three firearms specialists that the game mentions.

A lot like the Yochi’s Bow, the Inadome-style Matchlock has an effect that adds Ranged Bulleye Bonus to the damage it deals. The bonus granted from the rifle can be from 29.6% up to 35.6%. 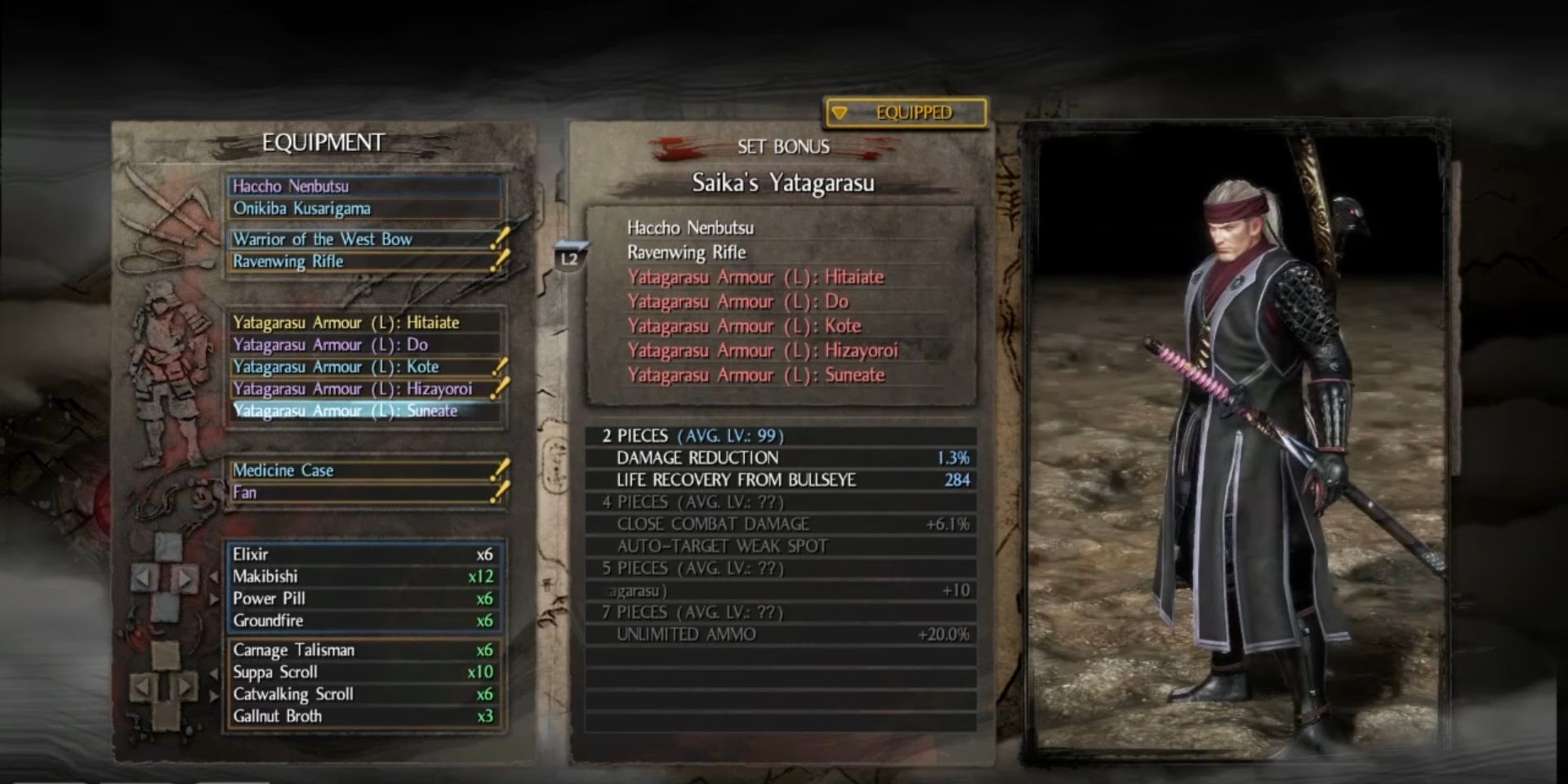 The game mentions that this rifle belonged to the head of the Saika clan, Saika Magoichi. It is decorated as an homage to the three-eye raven that acts as Magoichi’s Guardian Spirit. It is said that this raven, known as Yatagarasu, guides the bullets shot from this rifle to the target’s weak points. It sounds like a great guardian spirit, although it might not rank as one of the best.

This rifle has the third-highest attack multiplier of all rifles, but the most important thing about this weapon is the fact that it’s part of Saika’s Yatagatasu set. This means that the player gains some bonuses when two pieces of the set are equipped (the rifle counts as one). More pieces grant even great bonuses, with the whole set consisting of seven pieces in total. 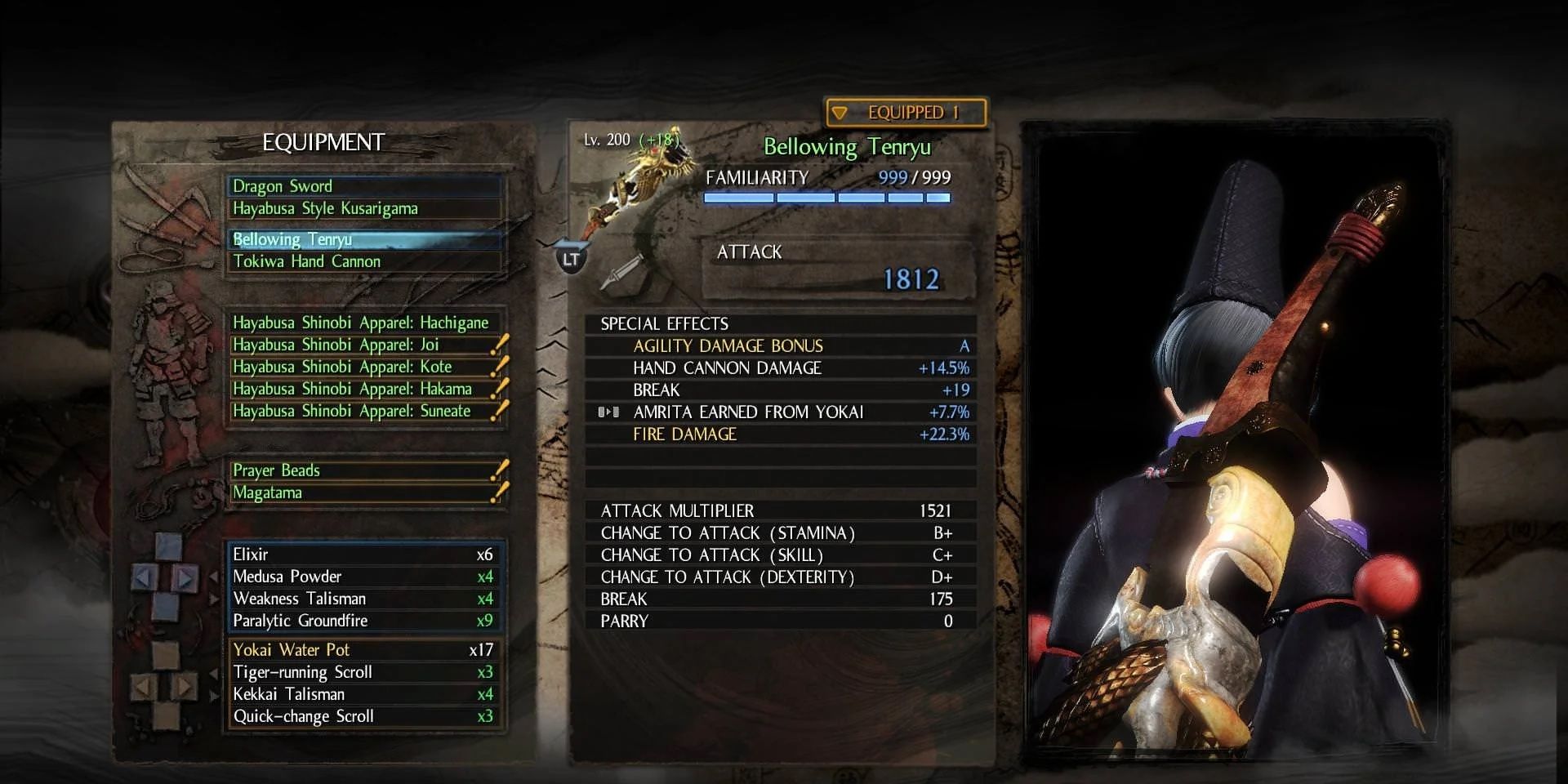 It is said in the in-game item description that this hand cannon is special. It was built by a great gunsmith, and it’s shaped like a European castle cannon. It was said that the explosion it causes is similar to the destruction caused by a heavenly dragon shouting.

All that fluff does not make it extraordinarily great in-game, though. Although many random effects might come with it when reforged, besides being the third hand-cannon with the highest damage, there is really nothing else special about the Bellowing Tenryu. 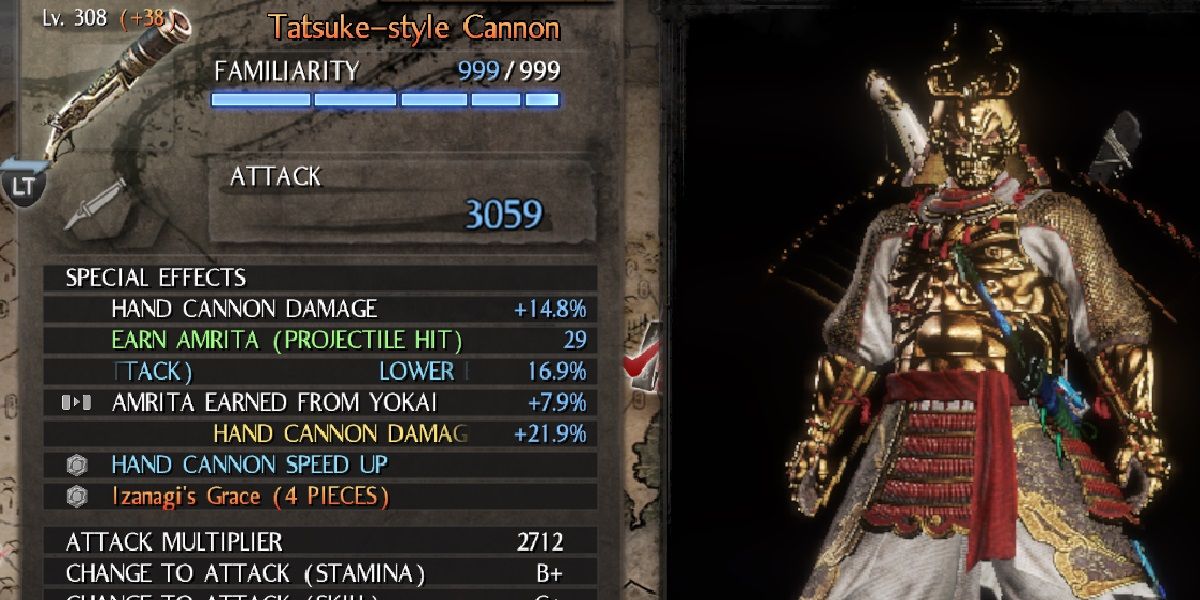 This is another masterpiece made by Tatsuke Kagesumi. His work with hand cannons seems even more impressive than his matchlocks. Tatsuke is also known for pulling out a direct hit on the main keep of Osaka’s Castle with a cannon.

This hand cannon has the second-highest damage of all hand cannons in the game. Besides that, it also has the Hand Cannon Speed Up effect. These two categories combined are already enough to make it a great cannon, but players can also get an extra effect by reforging it. 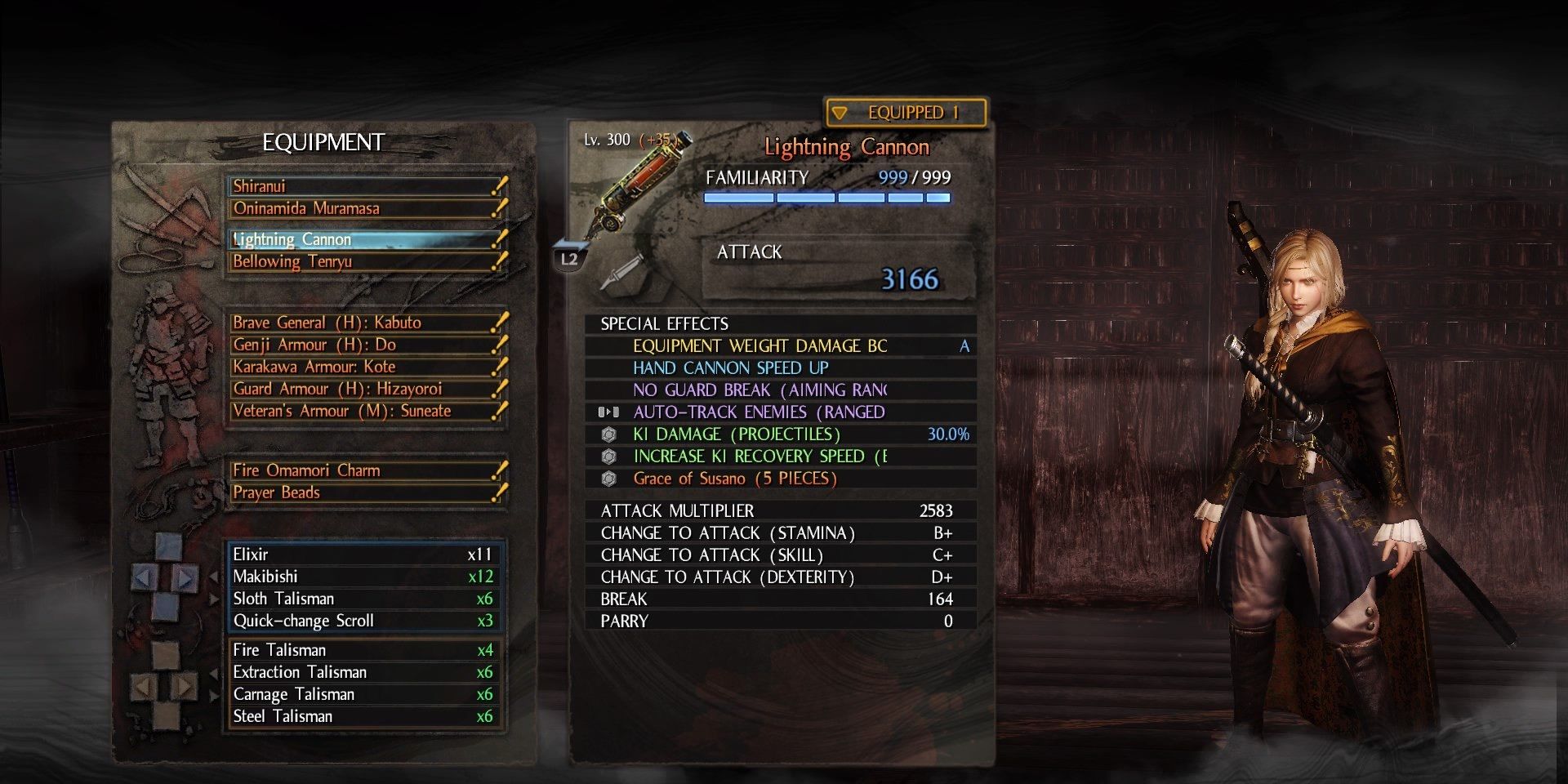 It is said that Goto Matabe developed this hand cannon. In theory, this hand cannon has enough power to damage the walls of a castle. The name comes from the sound it makes, resembling the sound that follows lightning. Since Matabe was banished from the clan he was part of — the Kuroda clan — it is rumored that he might have leaked this design to others.

In game terms, the Lightning Cannon has the highest damage of all hand cannons in Nioh. It also has two special effects, dealing extra Ki Damage and increasing one’s Ki Recovery when out of Ki.

NEXT: Nioh 2: 10 Things That Make No Sense In The Game 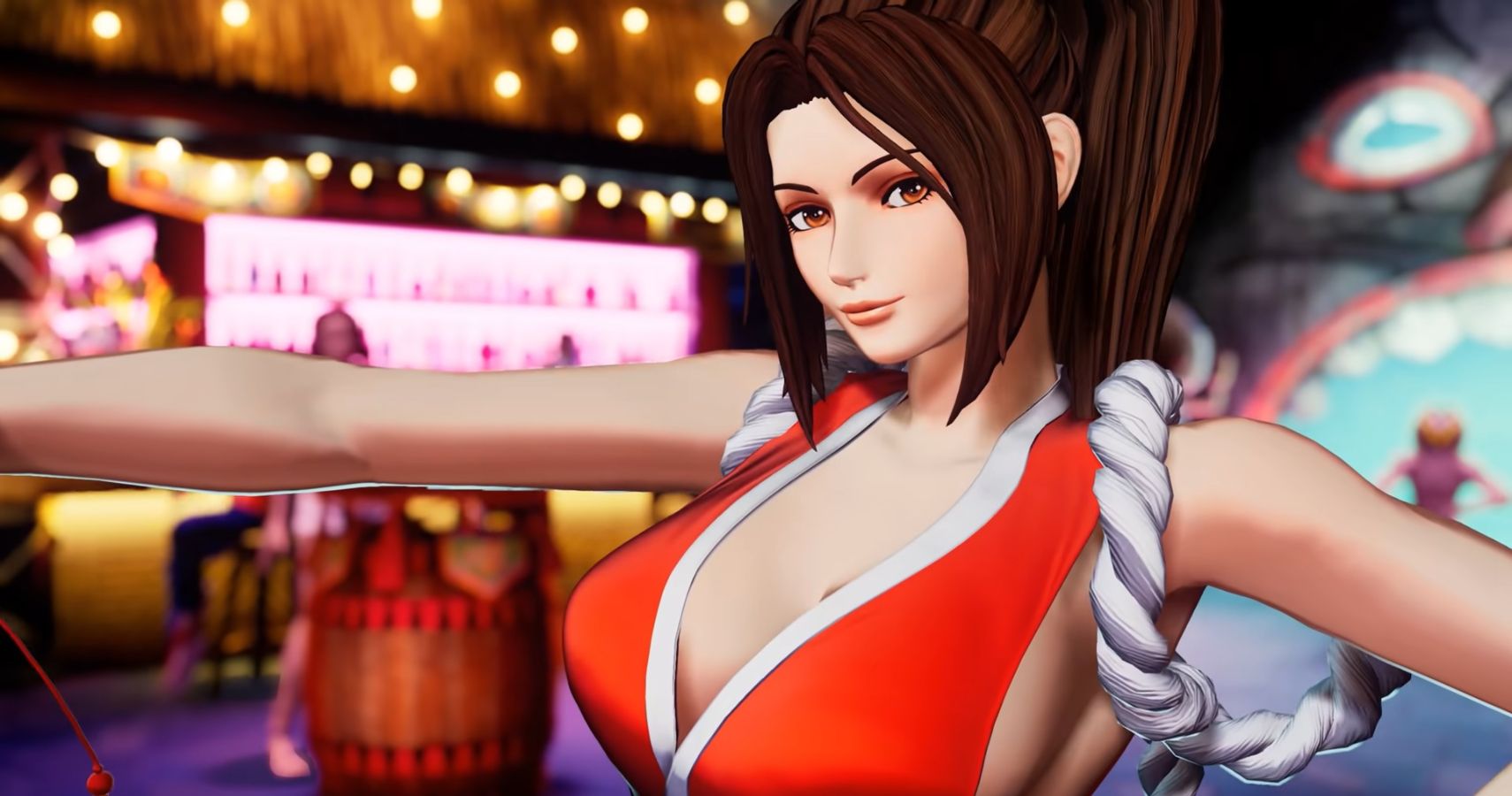 Once a heavy metal singer, teacher, workforce manager, and an internationalist, Davi has worked in many different fields until he decided to dedicate himself to his passions: videogames & writing. Often controversial, he thinks Dark Souls 2 is the best Souls game and has interesting takes on many things that people tend to dislike.