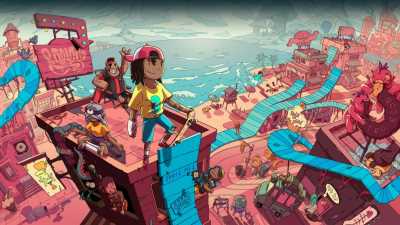 There tends to be two schools of gameplay when it comes to skateboarding games: the arcadieness of the Tony Hawk series and its ilk, and the more technically-focused simulations of the Skate series and the games it inspired. While I’m sure there are plenty of people who enjoy both, I tend to see it as one or the other; you either prefer the over-the-topness of impossible combos in Tony Hawk, or challenging yourself with next-to-real lines in Skate. I much prefer the former.

For two games now, the OlliOlli series has fallen more in-line with the latter, being a 2D take on the simulation skateboarding genre. And for what it’s worth, this has worked outstandingly for developer Roll7, which not only received acclaim for its action sports games, but even won a prestigious BAFTA in 2015 for the first OlliOlli.

But if you’re like me, playing OlliOlli and its sequel can feel inscrutable. Even in their earliest sections, aside from teaching you the basics of controls, the games often feel as though they are just cutting you loose to figure it out yourself. If that’s a struggle, too bad, so sad. You will be punished for your mistakes.

Roll7 isn’t blind to this fact.

“OlliOlli 2, if you miss a landing, we punish you three different ways,” Roll7 CCO John Ribbins tells Game Informer. “You lose your speed, you get a crappy animation, and you lose your score. I think we just thought, ‘That’s so harsh.'”

The next game in the OlliOlli series, OlliOlli World, hopes to lower the barrier to entry for the series. While the developer says it isn’t necessarily removing the skill ceiling – fans of the first two games will still find deep systems and tricks to perfect – simply booting the game up and having fun has been made far more approachable in World.

We recently had a chance to go hands-on with OlliOlli World and put this to the test. For the most part, Roll7 is spot-on. Within minutes, I was able to begin building my combos, implementing new tricks and mechanics, and I didn’t feel as if the game was taking every chance it could to punish me. After a few hours with the game, I was besting personal high-scores and pulling off more and more complex trick lines as my knowledge of levels grew.

I don’t doubt this will initially turn off some of the more hardcore OlliOlli fans, but for me, who never really clicked with the first two games, I felt it was immediately satisfying to grasp what the game was asking of me and far more fun and interesting to pull of cool tricks instead of banging my head against a near-vertical skill curve.

“While we don’t want to get rid of that, we want to provide players with more space in the game to actually just cruise around and enjoy feeling a bit more skillful,” says Roll7 co-CEO Simon Bennett.

OlliOlli World’s visual palette has also received a complete makeover. Where its predecessors used a 2D sprite-based look, World goes for a cel-shaded, cartoony aesthetic that’s altogether more interesting and fun. The game’s different levels also benefit from this overhaul, featuring a variety of different backdrops to try and catch a glimpse of as you skate by.

The last major change World brings to the series is a story. The game tells the tale of an island called Radlandia, which is governed by, as Ribbins puts it, “skate gods who are masters of the various elements of skateboarding.” As the player character, you’ll travel around Radlandia with a group of locals on a road trip – inspired in part by old skate videos and the team’s own experiences – trying to master the gods’ different skills.

It’s a goofy premise, but one that conveniently gives meaning behind the game’s level design. Which, rather than just be a series of rails and stairs, incentives using the geometry to explore the different areas of Radlandia. Instead of one linear track to skate down, World will have numerous different paths within a level to explore. Rewards, side-quests, and alternative paths can all be found through exploration.

While I didn’t get too much time with the game’s overall story (which, if I had to guess, is light at best), it didn’t do much for me. If anything, I found each secondary character to be a grating caricature of different skate archetypes; cartoon versions of what’s “cool” you might find on the bottom of a Wal-Mart skateboard deck. Luckily, it’s easy to skip the game’s dialogue.

Roll7 hasn’t announced a definitive release date yet for OlliOlli World, but it’s expected to be released in the winter. Based on my time with the game, I’m excited to play more. At a basic level, it’s a good-feeling game, but I’m also interested in seeing how its approachableness lends itself to the harder levels and how my own skillsets adapt to that skill curve.