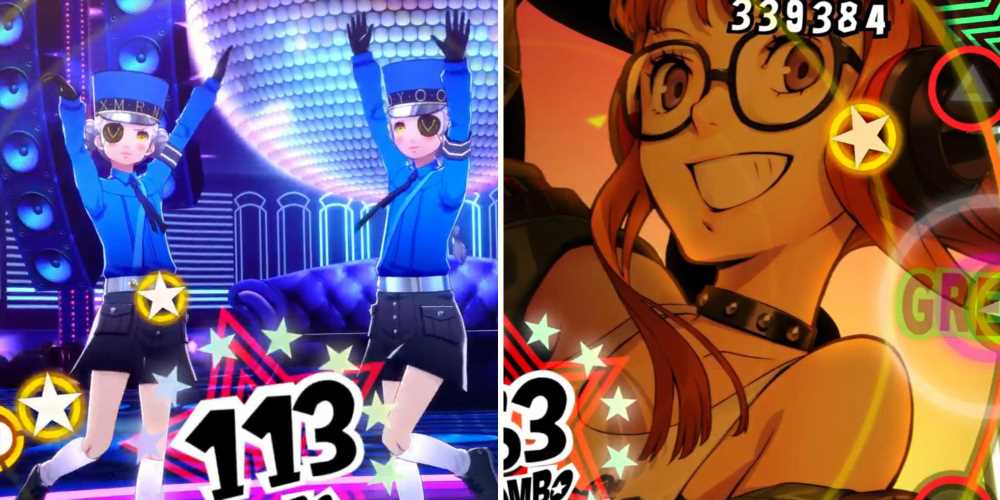 The companion game to Persona 5, Persona 5 Dancing In Starlight, is a rhythm-based game that includes tracks from both the base game and other Persona games. Tracks from other Persona games are only playable through purchasing the DLC, but the ones you have access to without DLC are still immensely entertaining to play.

You can jam it out to battle themes as Ryuji, Ann, Makoto, Futaba, Akechi (DLC only), and even Caroline and Justine. Depending on which track you’re playing, you can also select characters from a drop-down list who will join you during the fever time part of the dance. But if you’re in the mood for more of a challenge during your time with Dancing In Starlight, here is an excellent place to start. 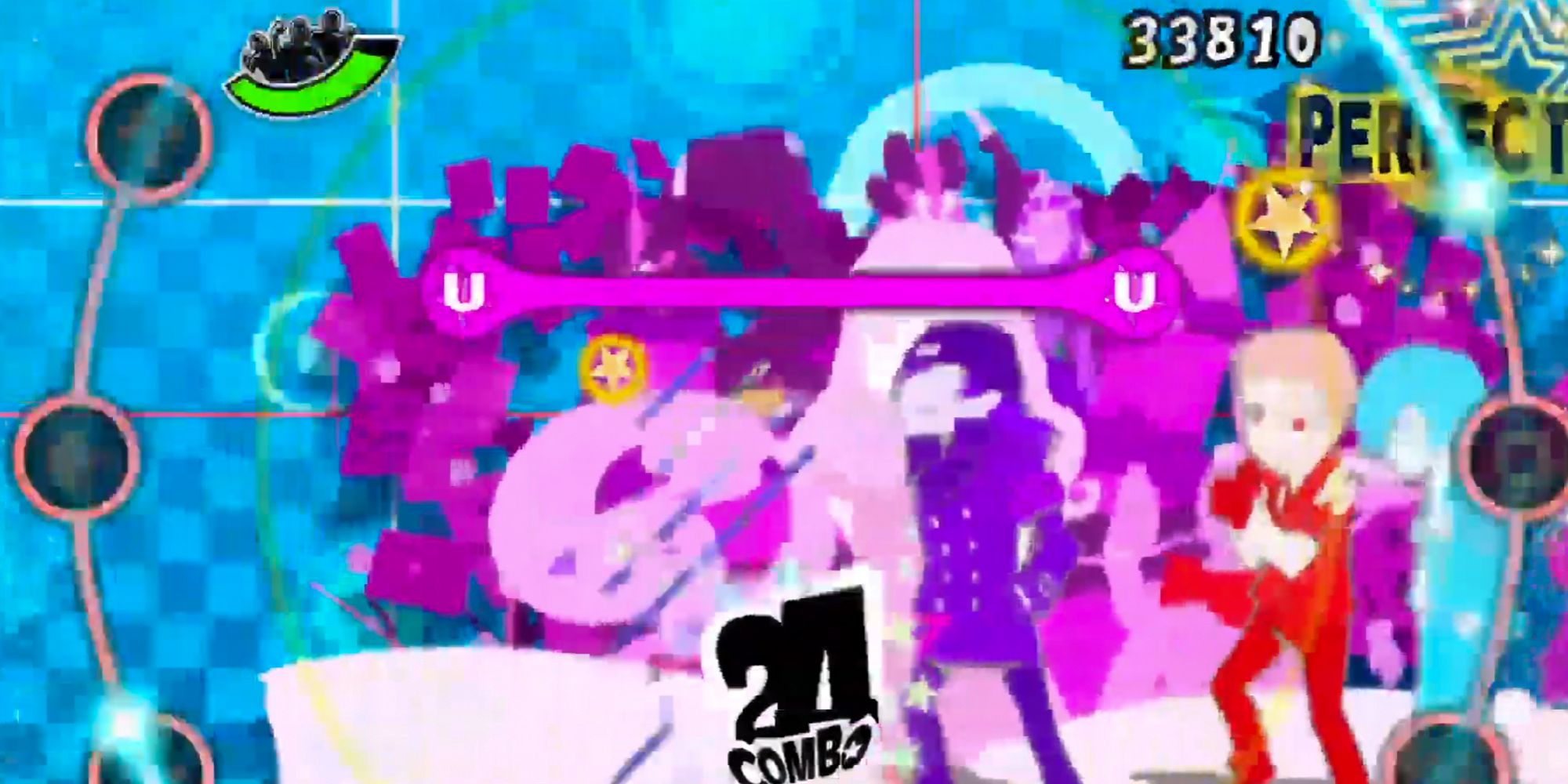 Maze Of Life is a track from Persona Q and isn’t only tough to get through because of the high octane beat, and button prompts you’ll need to enter extremely fast, but also because the video that plays during the track is bright and distracting. In addition, the bright colors can sometimes make the notes hard to see, meaning you may notice them once it’s already too late to input the prompt.

Thankfully, Maze Of Life is on the shorter side, so once you get down the rhythm and focus extra hard on the screen, you can get into the groove of the correct button prompts. 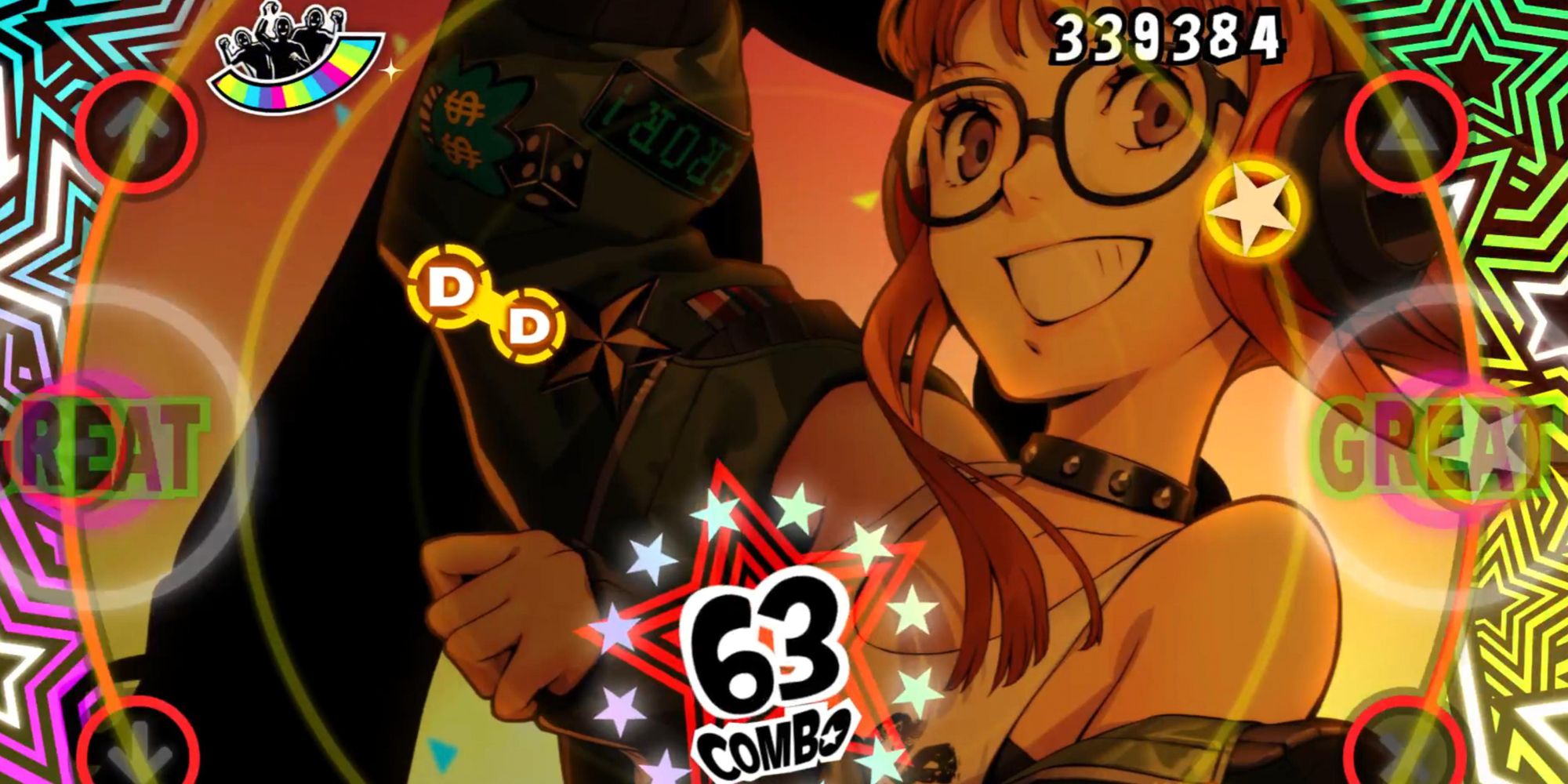 Unlike other tracks in Dancing In Starlight that require you to press the right prompts incredibly fast, One Nightbreak asks the opposite of you with a slower beat, making it easy to press either too early or too late. During fever time in other tracks, the intensity ramps up with the speed and difficulty of the prompts, though with One Nightbreak, the rate stays pretty much the same.

Overcoming the track means unlearning everything you have previously and taking it slow to ensure you don’t press at the wrong time. One Nightbreak is also one of the longer tracks, so the difficulty can get on top of you fast. 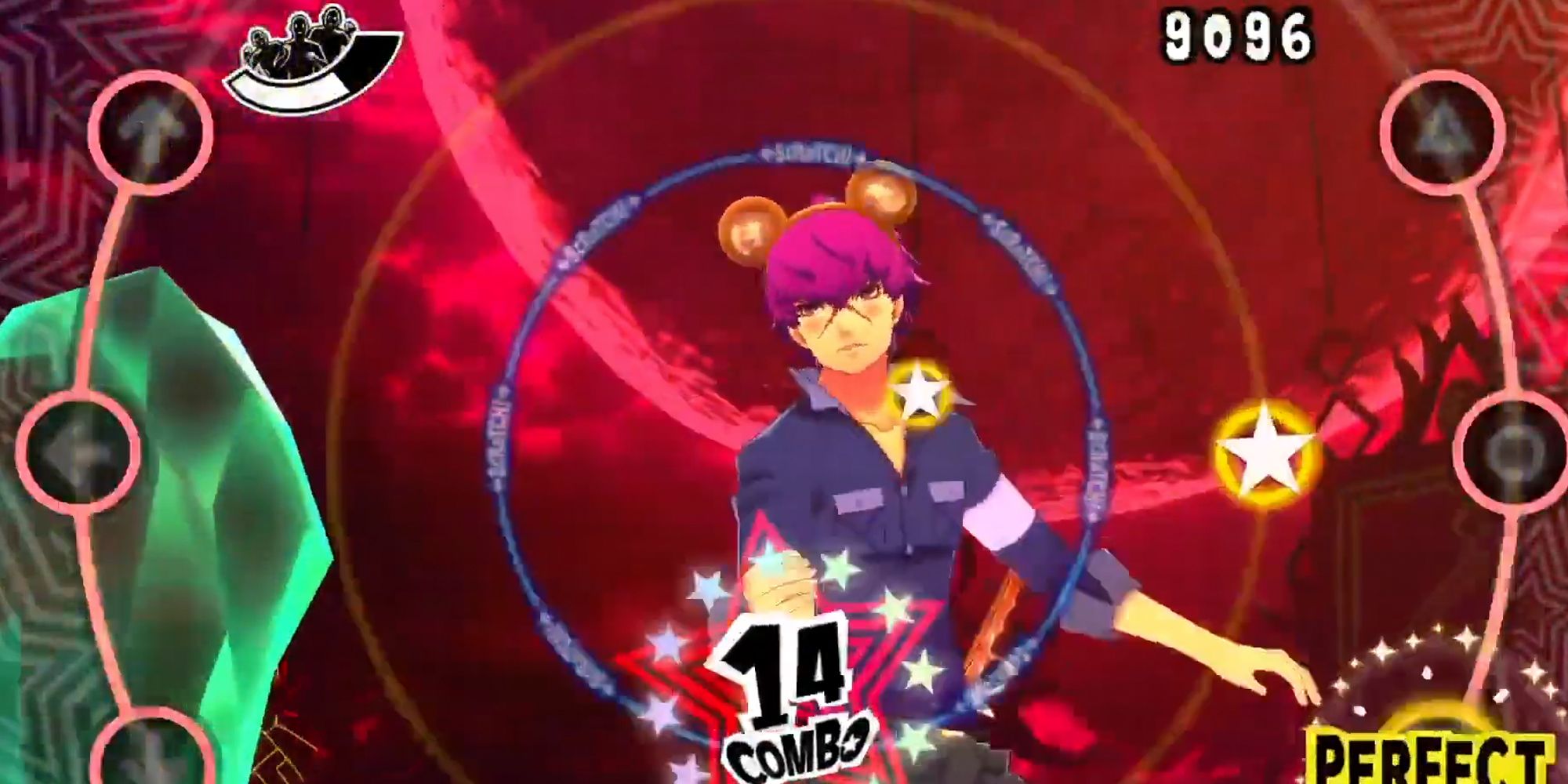 Pressing all the correct inputs and not missing a single scratch gets even trickier when playing on Hard or All Night difficulty but for an unexpected challenge that is tough even on Normal mode, Break Out Of… is the track for you. It’s especially prevalent during fever time when you’ll have to deal with notes, unison notes and scratching in quick bursts.

The track is taken from Persona 4 Arena Ultimax and stars Sho Minazuki, who combines swordplay into the dance. 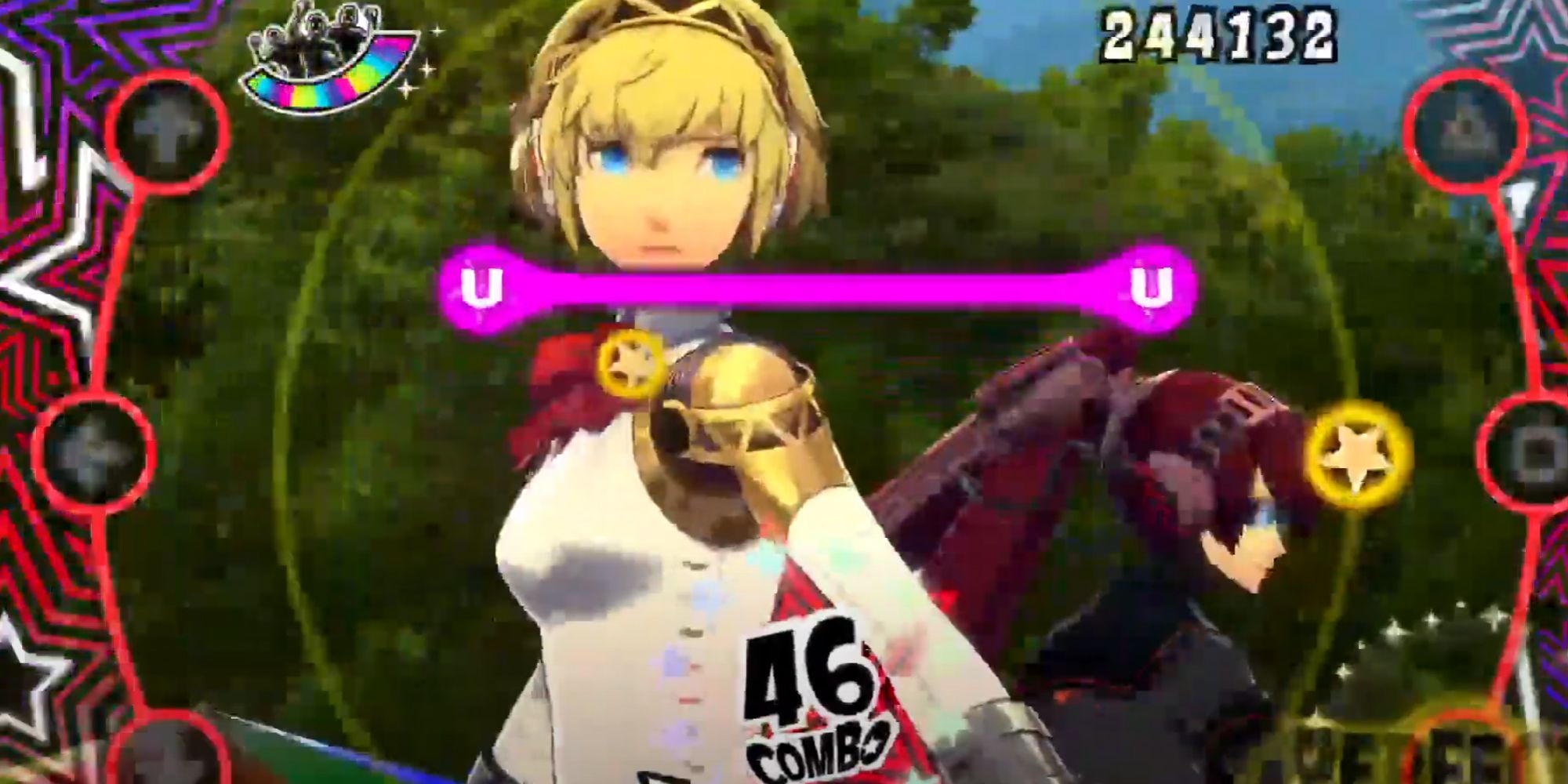 Today is a track focused on double notes and hold notes that need to be timed just right but what brings tricky to a whole new level is during the middle part of the dance, where every type of note gets thrown your way. During this section, you must press all the correct single and double notes, hold notes at the exact right time, and tap all the unison notes, while also getting those essential scratches in there.

The middle part is more challenging than the fever time dances because of this, which is the main reason why it’s so difficult to earn the King Crazy rank on this track.​​​​​​​ 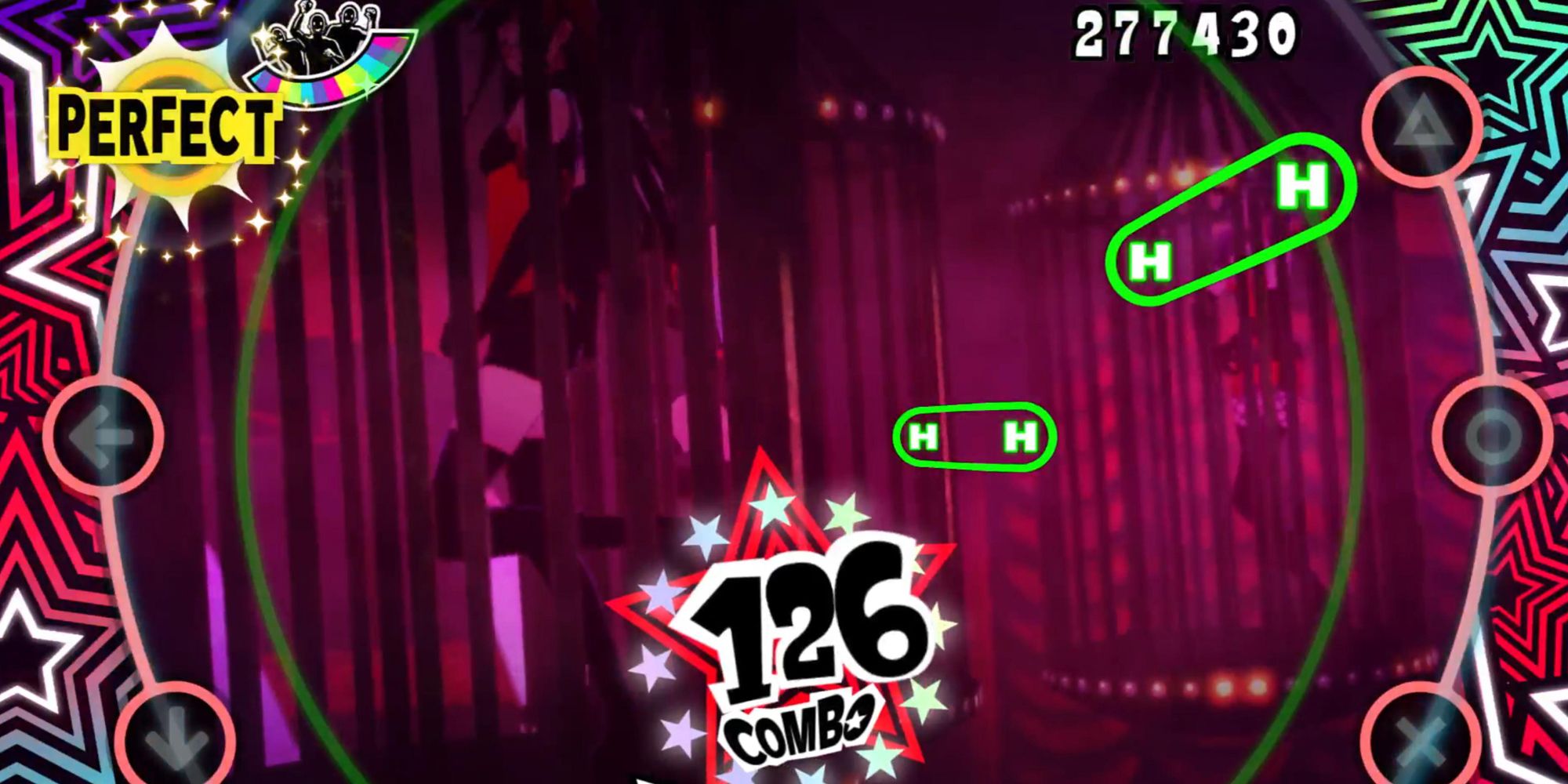 The fever time is what will break your combo in the Last Surprise track featuring the women of the Phantom Thieves. During these parts, hold and unison notes come, and they come fast, with it being easy to slip up on one of these notes ending your mile-long combo. The segments aside from this are still tricky but easier to keep up with, with the main trouble laying with getting all the scratch notes.​​​​​​​

It’s a lengthy track and one that changes up the speed, so you have to be on your toes constantly.​​​​​​​ 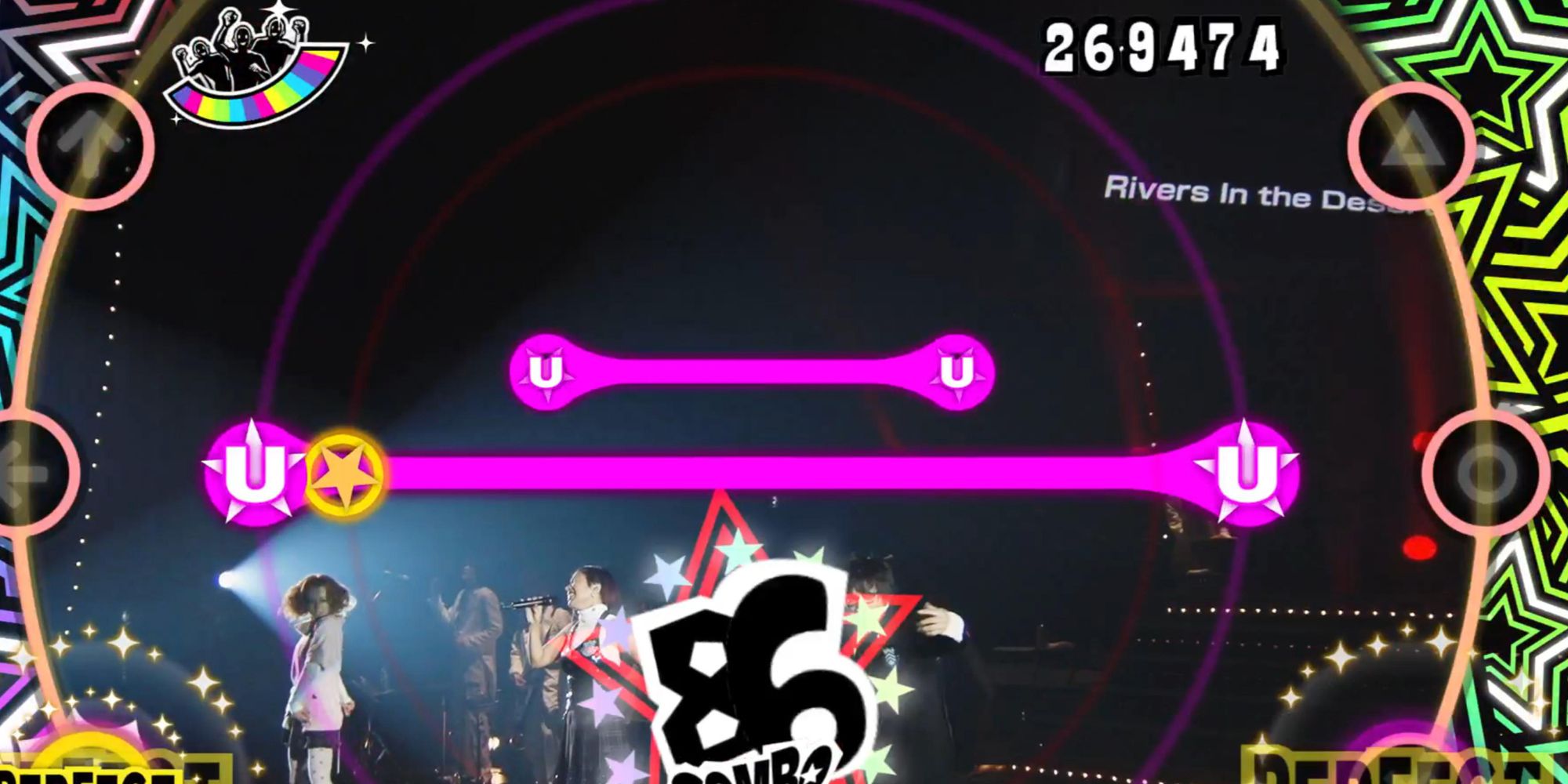 Maybe it’s down to the length of the track and how notes speed up during certain parts of the track, or perhaps it’s because of how spread out notes are through the playing field, requiring you to look at all parts of the screen. It’s a little of all these aspects and how these factors pile up and eventually wear you down over the course of the track.

It becomes increasingly difficult to keep track of all the notes as they fling across the screen while trying to match them up to the beat. Couple that with the scratch notes, which will distract you from the other notes you need to be hitting, and it’s easy to lose thought of what button you should input next.​​​​​​​ 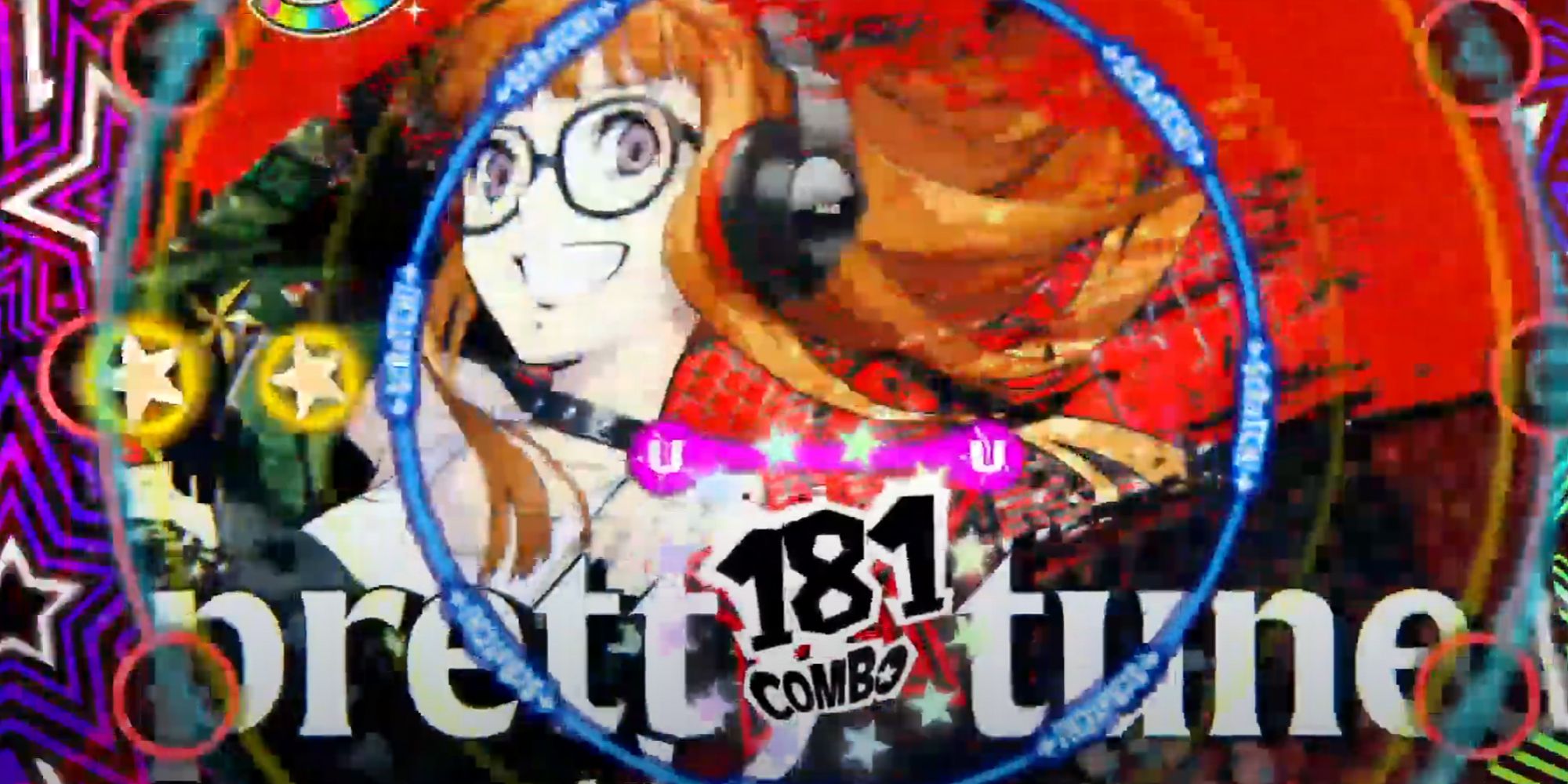 Both versions of Groovy are awkward to get the hang of but what makes the full version a little more difficult is the same problem that the Maze Of Life track has going for it. The video playing behind the notes makes it difficult to see all the pieces you need to be hitting because of the flashy images and words that play in the background.​​​​​​​

Groovy is also just an incredibly fast-paced track with all types of notes that come at you at rapid speeds through almost all the track, and it’s also a pretty long song to boot. All of this eventually starts to stack up and make it easy to lose your train of thought, so the main thing is just to keep practicing until you get all the right prompts down.​​​​​​​ 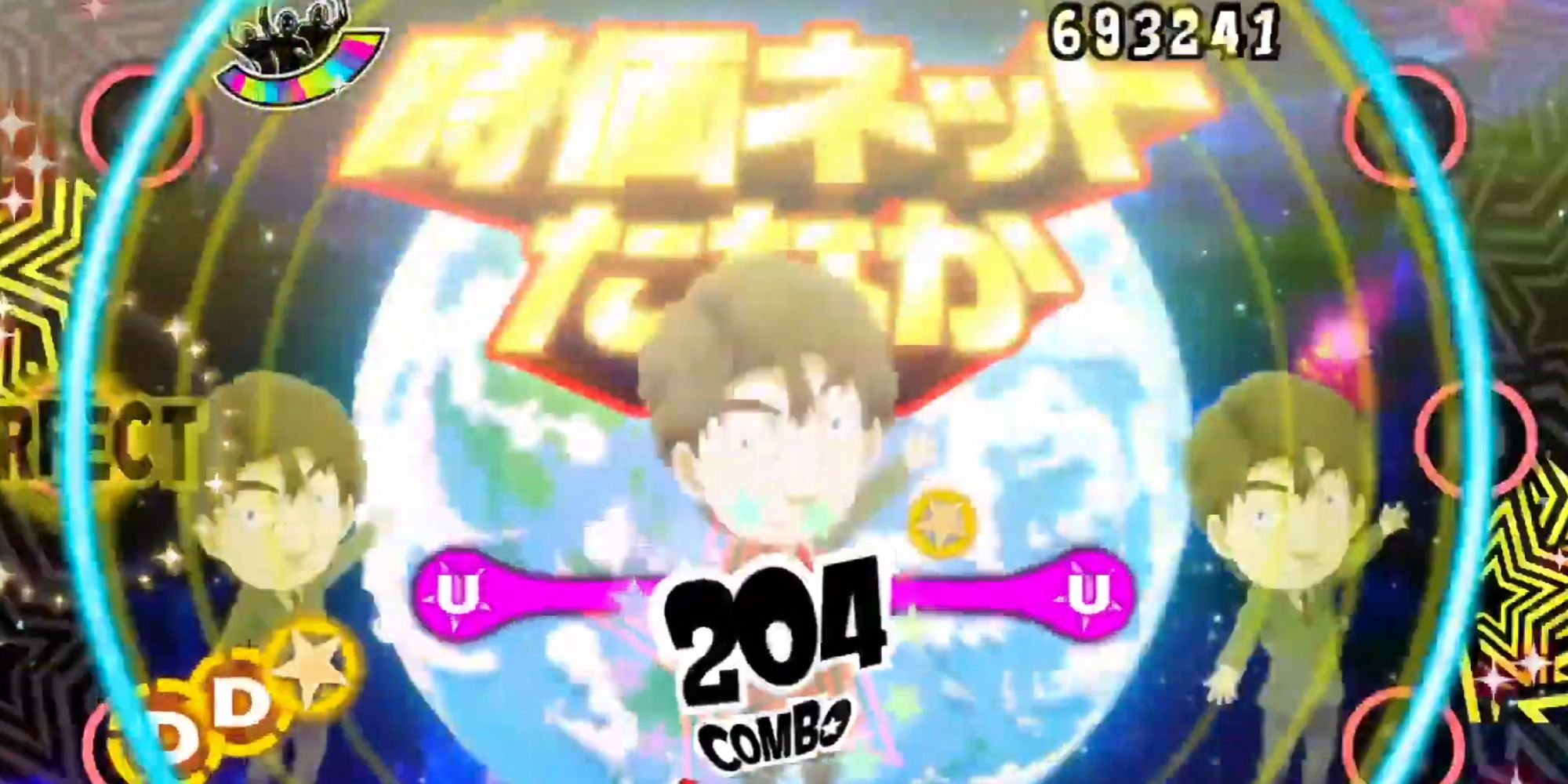 Tanaka’s Amazing Commodities comprises unison notes, double notes, and scratch notes that are placed close to one another, meaning you’ll have to switch between the buttons you press almost instantly. These moments become even more stress-inducing during fever time when more is thrown at you and at a faster speed, with double notes appearing at all parts of the screen.

For those courageous enough to attempt this on All Night difficulty, be warned as hitting all those sweet spots is a challenge few will be able to walk away from. 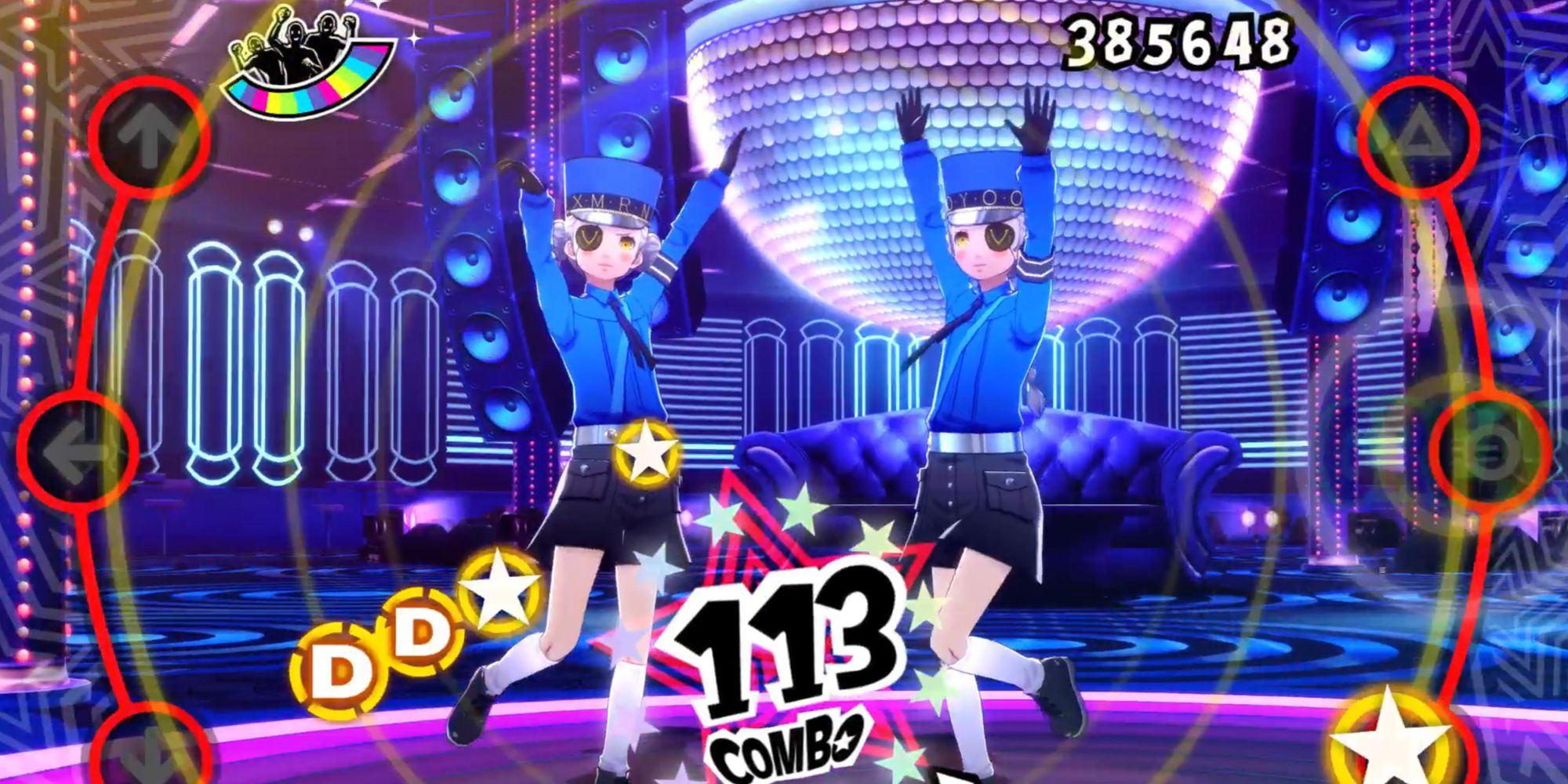 The Life Will Change track starring Caroline and Justine features all the bits and pieces which can make tracks hard to keep on beat with; it has notes right next to each other where you have to move from a unison note to a single or double note while keeping on top of the scratches and scoring those perfect marks.

Move over to fever time, and all of this is increased with faster prompts and notes spread across the screen that you have to input simultaneously. The track is still nowhere near as tricky as the twin’s fight in Persona 5 but is a worthy mention in terms of Dancing In Starlight difficulty.​​​​​​​ 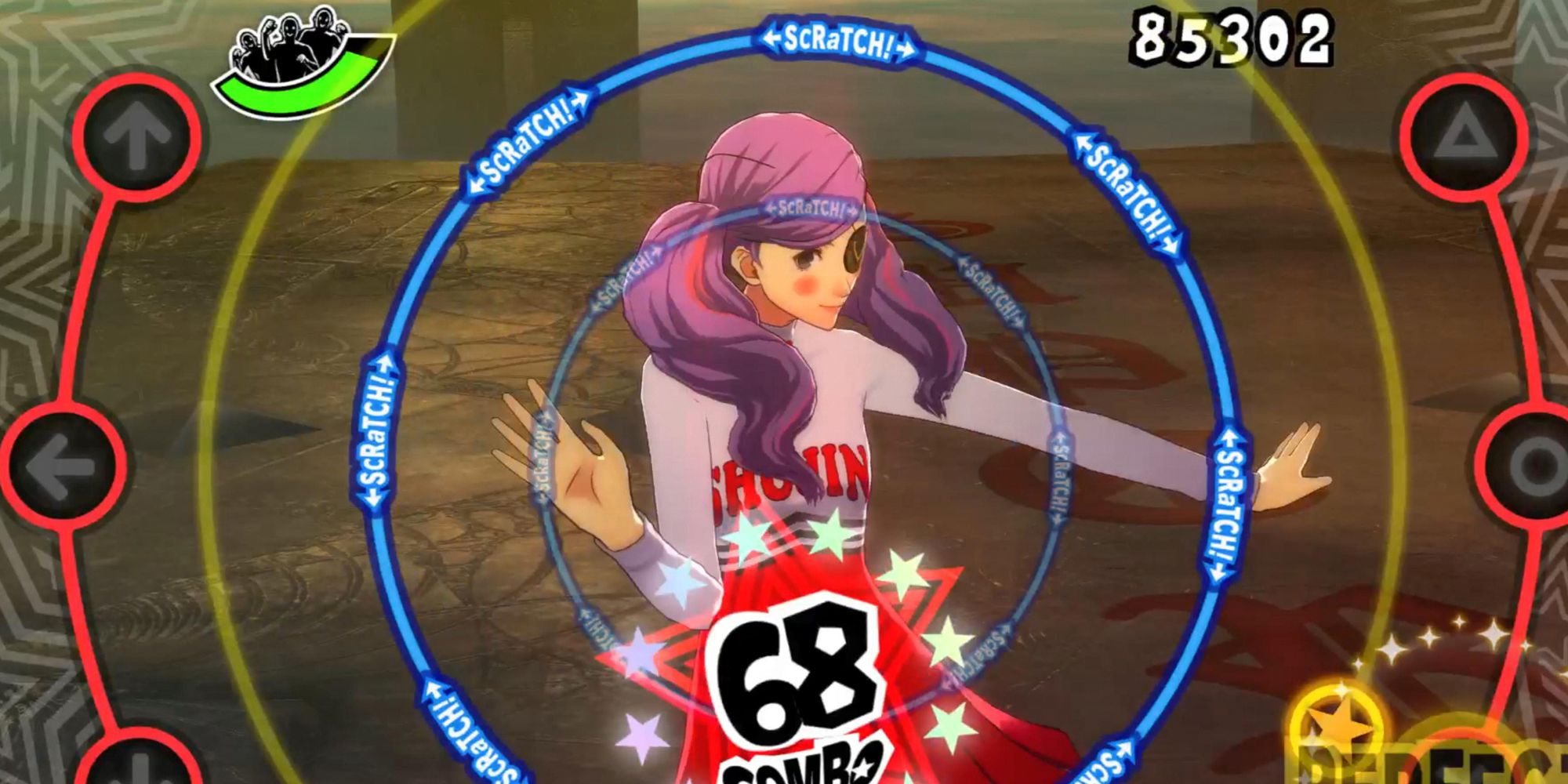 Yaldabaoth includes everything that adds an ounce of difficulty in Dancing In Starlight. Notes close to each other, notes spread across the entire screen requiring quick reflexes to press, scratch notes right next to each other, and speed changes through the track. On top of all that, it’s probably the longest track in the game.

Where some track difficulties waver depending on the difficulty you play the track on, Yaldabaoth is challenging no matter the difficulty. It can even be pretty tough on your first run-through on easy.