Legendary Pokémon: What’s not to like? Ever since the beginning of the Pokémon franchise, legendaries have existed as the crown jewels of any trainer’s adventure due to their epic strength, stunning aesthetics, and the pivotal roles they play in the franchise’s main series. Catching yourself a legendary can allow you to invoke envy among friends, trade for your dream Pokémon, and clean up on the battlefield.

For all their intensity and intricate lore, legendary Pokémon can be just as hilarious as non-legendaries, sometimes even more so. Seeing a majestic creature in fishnets and high heels? Who would say no? Here are 10 legendary Pokémon memes that will make you laugh like a Loudred. 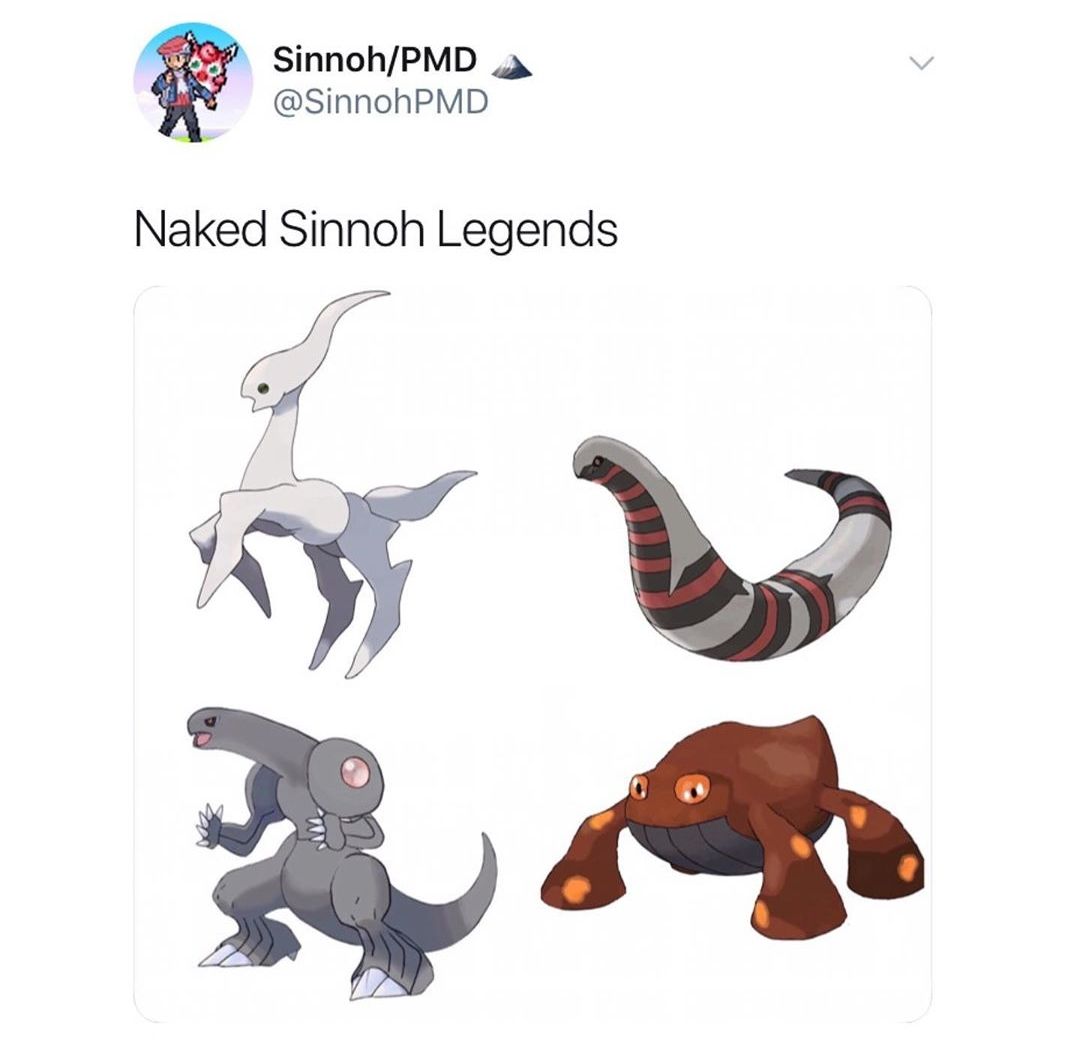 A hilarious trend of removing the “accessories” or “armor” from Pokémon has captured the internet’s attention. Some of our favorite Pokémon just look so bizarre without their fins or shells. This meme has spread to tech-savvy Pokémon fans, who have taken it upon themselves to remove the armor-esque parts of legendary Pokémon such as Arceus, Giratina, Palkia, and Heatran.

Giratina ends up looking like a strange snake, while Heatran becomes, essentially, a frog. Arceus, the god of all Pokémon? Reduced to a ghostly goat of some sort. Palkia? Surprisingly not half-bad. 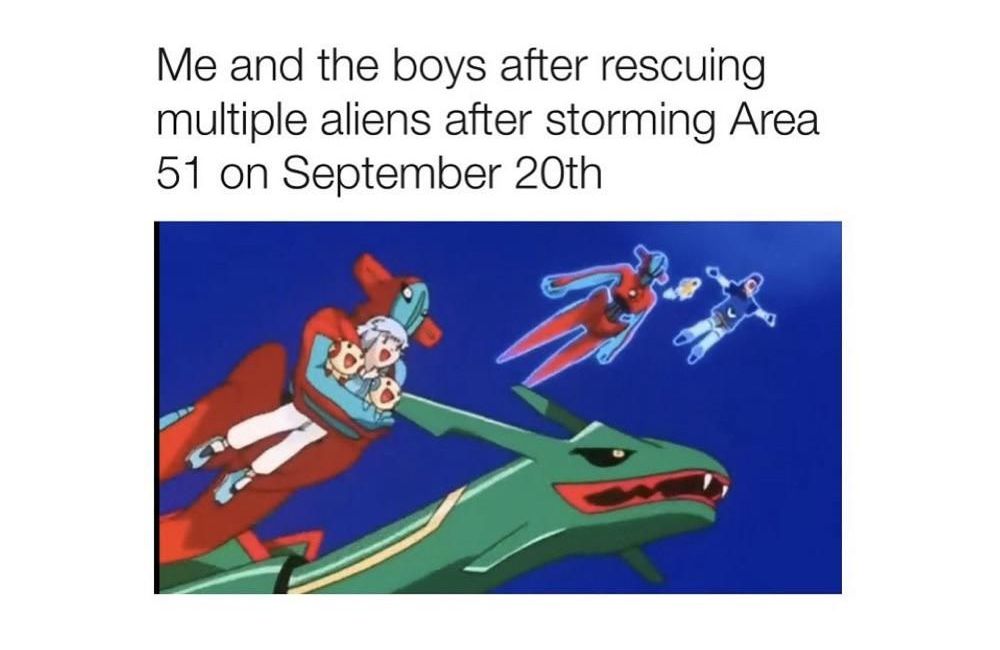 Who doesn’t remember the surge of Area 51 memes, where everyone was convinced the U.S. Government was hiding aliens from the public and keeping them captive? Though the resulting action was more memes than a real raid, the Pokémon fandom absolutely delivered with memes on our favorite alien Pokémon.

The above meme, a screenshot from Pokémon: Destiny Deoxys, not only Deoxys but also Rayquaza, flying in the sky after having been freed by Ash and Tory. The Deoxys eventually ascend into the sky, leaving for an unknown place, but not before expressing their gratitude from having been freed. If only we could free the aliens in Area 51… 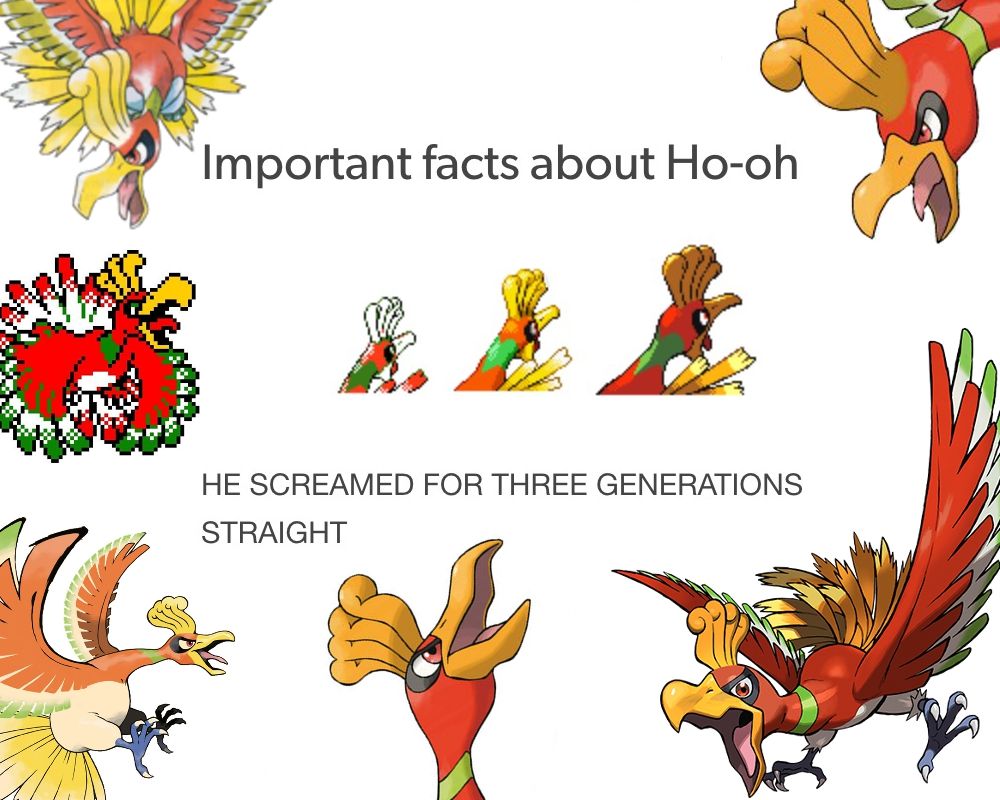 Guardian of the skies and master of the legendary beasts, Ho-Oh is Pokémon Gold’s legendary mascot, and the polar opposite to Silver’s Lugia, who often reside at the bottom of the ocean. Ho-Oh is arguably the game’s most realistic bird Pokémon, and that is because of its screams.

Ho-Oh’s in-game sprites for Generation II, III, and IV all feature the bird in mid-screech, looking more enraged with each generation. You’d be hard-pressed to find official art of Ho-Oh that doesn’t have its beak wide open. Clearly, Ho-Oh has a lot to say, and like a true Phoenix, will not rest until it has screamed its last breath. That’s one angry bird. 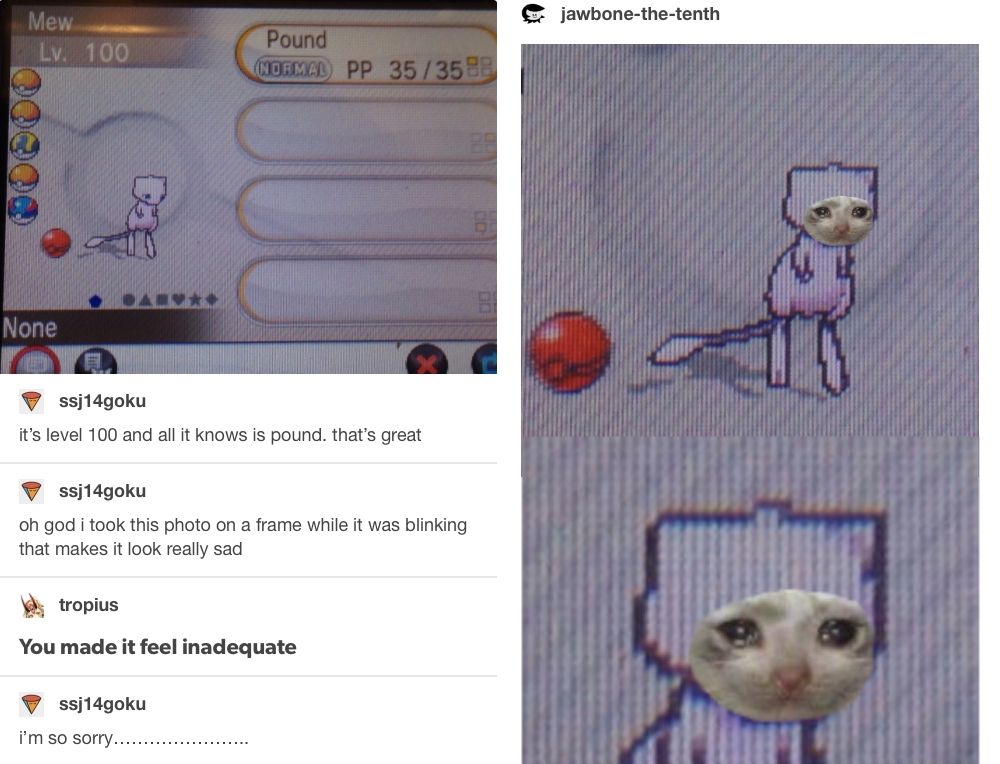 Mew, ancestor of all Pokémon, adorable and powerful, able to learn any move…But all it knows is Pound. That’s what one Tumblr user found after receiving a level 100 special event Mew in Pokémon X & Y. This particular screenshot makes Mew look so sad that its owner immediately regrets shaming it.

Taking it one step further, another user put the crying cat face on it (fitting, as Mew is everyone’s favorite legendary cat), which makes it look all the more despondent. Don’t feel bad, Mew; there are always TMs. 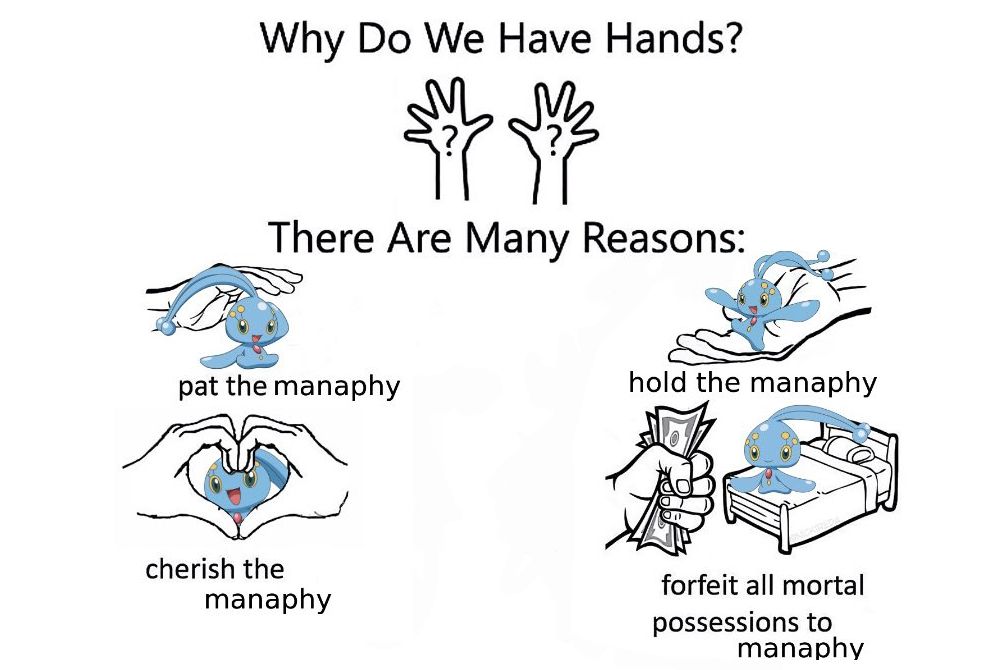 Admit it: Manaphy is adorable, and Pokémon Ranger and the Temple of the Sea only made us love Manaphy even more. For those of us who played the original Pokémon Ranger Manaphy mission, being able to transfer the Manaphy egg to Pokémon Diamond and Pearl and raise the resulting Manaphy was one of the coolest game crossovers of Generation IV.

The Prince of the Sea has gained a nontrivial fanbase for its cuteness, as seen in this hilarious meme above. You have an empty hand? Wrong. You should be using it to love Manaphy. 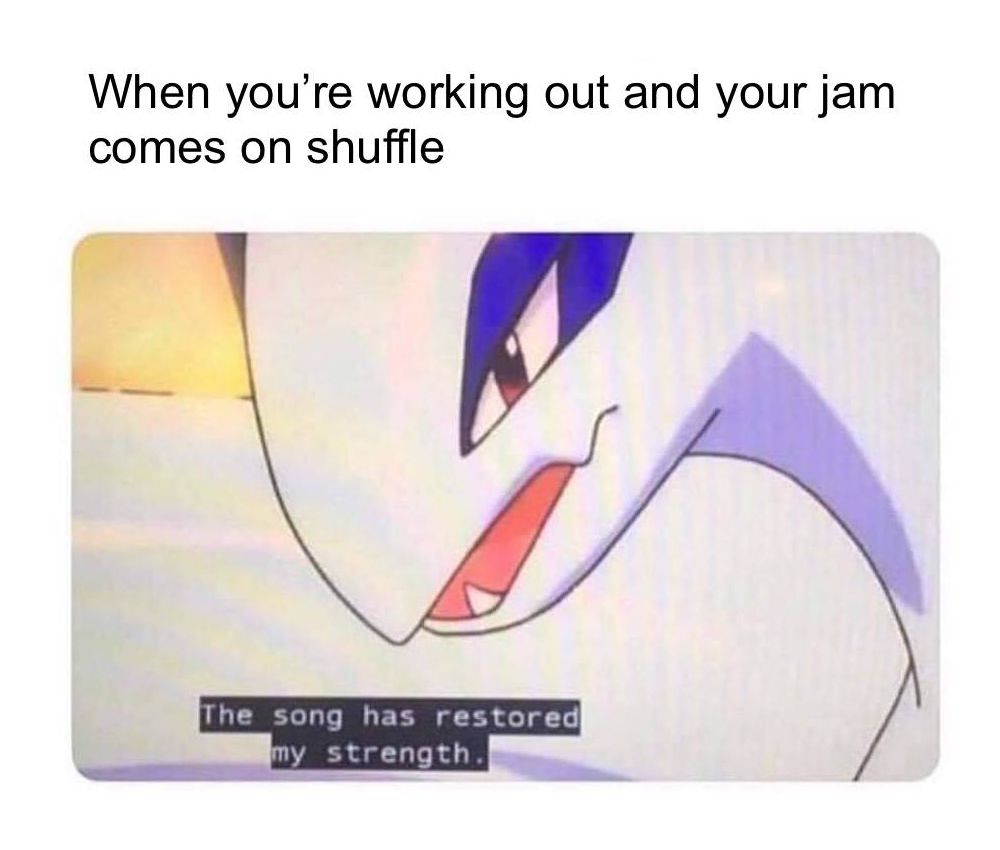 We had a meme about Ho-Oh, but what about Lugia? Arguably one of the best characters from Pokémon: The Movie 2000, Lugia is both wise and mysterious, with the ability to communicate with Ash to stop Lawrence III’s evil plot to capture the legendary bird trio and Lugia itself.

When Melody plays Lugia’s song, it restores his strength. Let’s be honest: doesn’t it feel the exact same way when you’re working out? Suddenly, we hear our anthem and get a burst of energy to push through the exhaustion. Music truly works in magical ways. 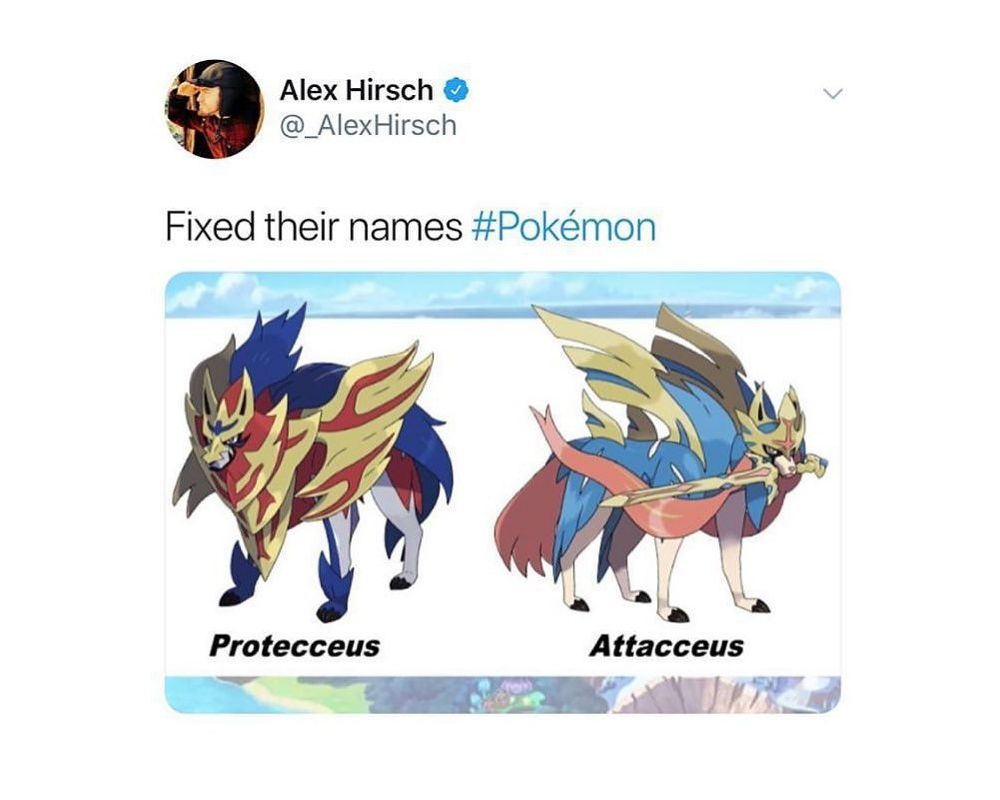 Zacian and Zamazenta physically represent their titular games: a sword and a shield. But why not take it one step further and have their names be representative as well? One twitter user did a hilarious edit of Zacian and Zamazenta’s reveal art to reference the “he protec, he attac” meme.

Not only are they the perfect nicknames for Zacian and Zamazenta, but they could also pass as legit Pokémon names. Another reason to fact-check any Pokémon news you see on twitter. Recognize the original tweeter? That’s Alex Hirsch, creator of hit show Gravity Falls.

3 Everyone Fears Moltres (Except Bulbasaur) 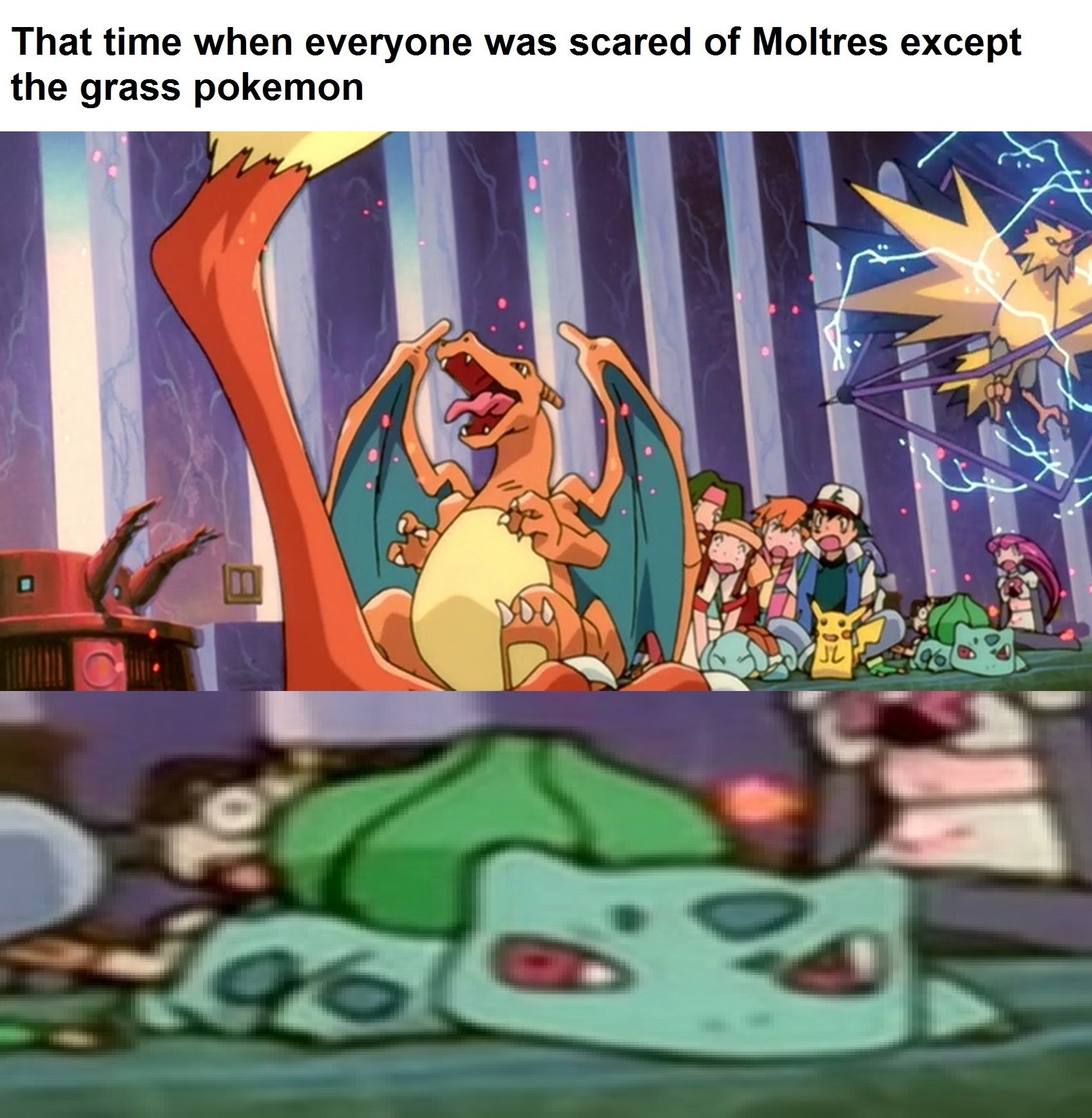 Another meme from Pokémon: The Movie 2000?! Maybe we’re feeling a little nostalgia, but for kids who grew up with Pokémon and saw the movie in theaters, this film has endless meme potential, from wise Lugia to raging Moltres.

Bulbasaur gets more flak than it deserves for being the Grass starter of Generation I. Sure, Bulbasaur has more weaknesses than Charmander and Squirtle, but it’s got something they don’t have: guts! Moltres, the legendary firebird, makes even Squirtle cower in fear, but Bulbasaur, the one most in danger, barely flinches. Now that’s a fierce flower monster.

Ever wanted to see Darkrai in high heels? An odd dream, but today is your lucky day: Tumblr user and artist MinuBell gained notoriety for drawing Pokémon in high heels and fishnet tights, and not just Pokémon with legs. As seen above, even Pokémon like Zygarde get a fashion makeover.

MinuBell also gives the gift of heels to the entire legendary beast trio, as well as non-legendary Pokémon such as Cosmog, Wailmer, and Magikarp. Seeing a fish do a high kick in heels is something every Pokémon fan needs to see. 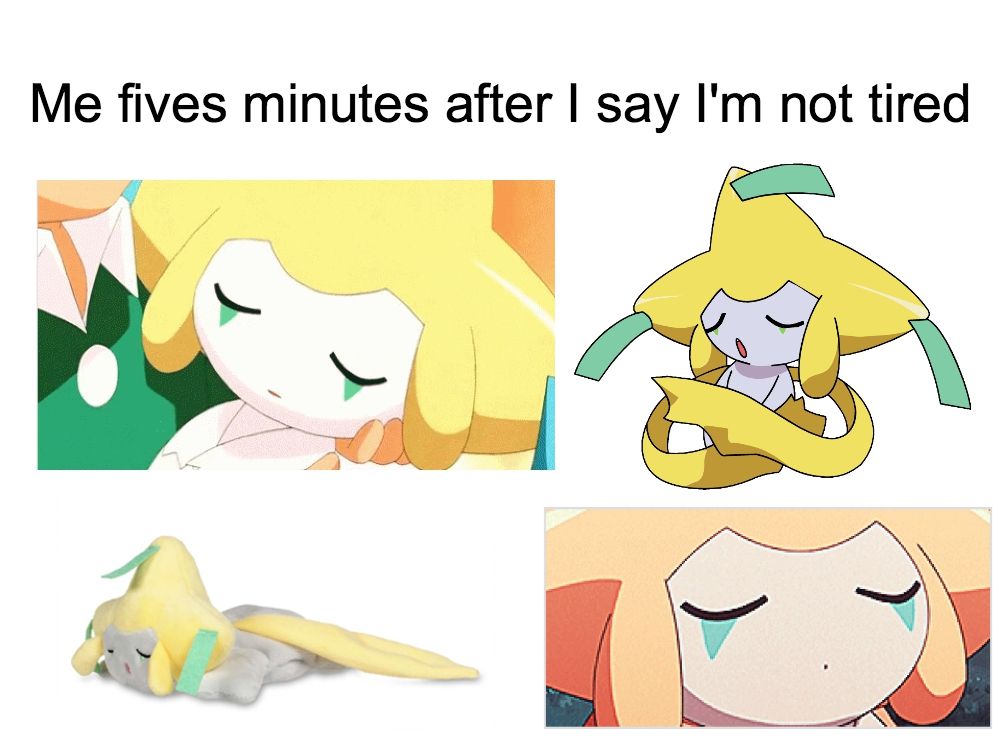 Who could forget Hoenn’s wish Pokémon? Though only available In Generation III through Pokémon Colosseum, European Pokémon Channel, or an Event, Jirachi played a major role in the movie Jirachi: Wish Maker. Awakening from a thousand-year slumber for the Millennial Comet, Jirachi chooses Max as its best friend, proceeding to grant wishes, fly around, and cause unintentional mischief.

Even during its seven days of being awake, Jirachi takes a surprising amount of naps. Using teleportation powers seems to make it very tired, falling asleep in Max’s arms immediately after. On behalf of Jirachi, this meme is for everyone who needs a nap.