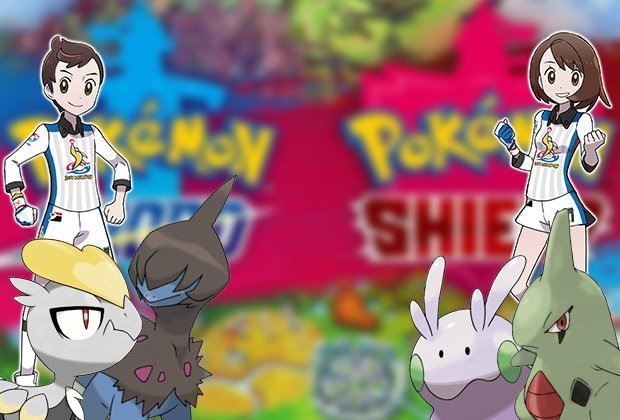 There has been a big Pokemon Sword and Shield reveal today that has teased new Pokemon and confirmed that version-specific Pokemon will once again be present in the game.

A new trailer revealed by Game Freak has confirmed we’ll be seeing more Galar-specific monsters come to Pokemon Sword and Shield when the game launches on November 15.

Today’s press release gave us a  proper reveal of Yamper, the electric-type Corgi Pokémon that was originally shown in the E3 demo for the game.

We were also introduced to the amazingly-named Rolycoly, a new rock-type Pokemon.

Duraludon, a steel- and dragon-type, was revealed too. As far as we can tell it’s a dragon based on a clothes iron, because of course it is.

Nintendo and Game Freak also showed off Alcremie, a confection-based Fairy Pokemon that turns into a cake when Gigantamaxed. Speaking of which, Gigantamaxing is a feature that allows Pokemon to alter their form and gain new moves – different from Dynamaxing which just makes them bigger.

Pokemon Sword and Pokemon Shield – What is Gigantamaxing?

Only certain species of Pokémon can Gigantamax—and even among such species, only rare specimens will be able to Gigantamax. The majority of Pokémon will keep their usual appearance when they Dynamax. Two Pokémon species revealed to have Gigantamaxing capabilities today are Drednaw and Corviknight.

Today’s news blast also confirmed that the different versions of the game will feature different Gym leaders – the first time a game in the series has done so.

Pokemon Sword will get Bea, the Fighting-type Gym specialist, whilst Pokemon Shield will get Allister – a Ghost-type specialist Gym leader.

“Bea is a prodigy in Galar karate, carrying on its century-old traditions and techniques. Known for her stoicism and rarely showing her emotions, Bea is also an expert on Fighting-type Pokémon. Her battle style remains very precise even when she’s backed into a corner.”

“Allister is a talented Trainer of Ghost-type Pokémon who has taken on the mantle of the Ghost-type Gym Leader at a young age. He’s extremely shy and fearful, and he always hides his face with a mask when around other people. Allister rarely makes public appearances and apparently spends most of his time around ruins or in cemeteries.”

“Certain towns in the Galar region will have different Gyms that Trainers can challenge depending on whether they’re playing Pokémon Sword or Pokémon Shield. In Pokémon Sword, they will face down Bea, while in Pokémon Shield, they can test their skills against Allister.”

The Japanese Pokemon account revealed that a few version exclusive Pokemon will be available in the games – expect this list to grow in due course, but right now we have two ‘late game’ families exclusive to each version.

We’ll let you know as more Pokemon are revealed for each game.