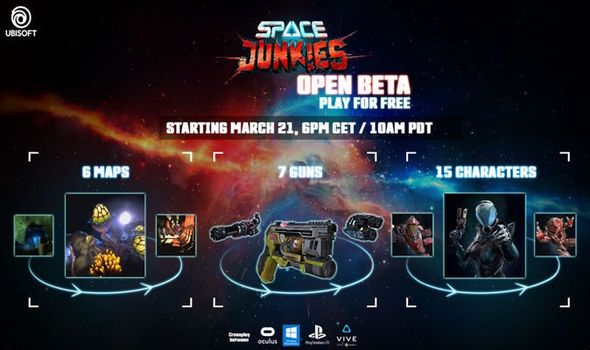 Another PS4 free game trial will be available this week for virtual reality fans willing to test a new title.

The open beta for Space Junkies is coming to the PlayStation VR tomorrow, March 20, and will be available to try out the entire weekend.

The first-person shooter is a new title from Ubisoft Montpellier arriving on PC and PS4 in 2019.

And the good news is that when the PSVR free download arrives on the PlayStation Store, fans will be able to enjoy the game with fans using other VR headsets.

For the first time, PlayStation VR players will be able to challenge or team up with PC players thanks to crossplay support between PS VR, Oculus Rift, HTC Vive and Windows mixed reality headsets.

It appears Space Junkies will be available to play for free on the PS4’s PSVR platform until March 25.

March 26 is the full release date for Space Junkies, so it would make sense that this is when the open beta would end.

Space Junkies will boast four PvP modes and six maps at launch, with a number of character classes and weapons, also included.

And from what Ubisoft has confirmed today, it looks like the Space Junkies open beta will contain all of the launch day content.

This will mean access to seven guns and 15 characters on top of the equipment choices that can be made in-game.

The free open beta will begin at 5pm on March 21 on PlayStation VR and other virtual reality platforms.

Here’s more information from Ubisoft who confirmed: “For the first time, PlayStation VR players will be able to challenge or team up with PC players thanks to crossplay support between PSVR, Oculus Rift, HTC Vive and Windows Mixed reality headsets.

“Prepare to enter deadly orbital arenas and fight against other players in a variety of modes (Duel, Free-for-All, Team Death Match and King Mode). Powerful weapons, such as Nuclear Slingshots or Plasma Sniper Rifles, are dispatched around the arena for you to pick up and use as you like!

“With a selection of 15 different characters and six equipments, fine-tune a loadout that fits your playstyle, and that will lead you to victory.

“Feeling like rushing and fighting up close? Pick Bugout, the fastest character in the game, and equip the solar sword to finish your enemies by getting up close and personal. Want to feel like an unstoppable tank?

“Pick Junker, the most robust character of all, and equip the photon shield to take enemy fire and bulldoze your way through enemies!

“This Open Beta is free to play for any player looking for fast gun-slinging action in OUTER SPACE, so invite your friends and get ready for a jet-pack fueled battle!”