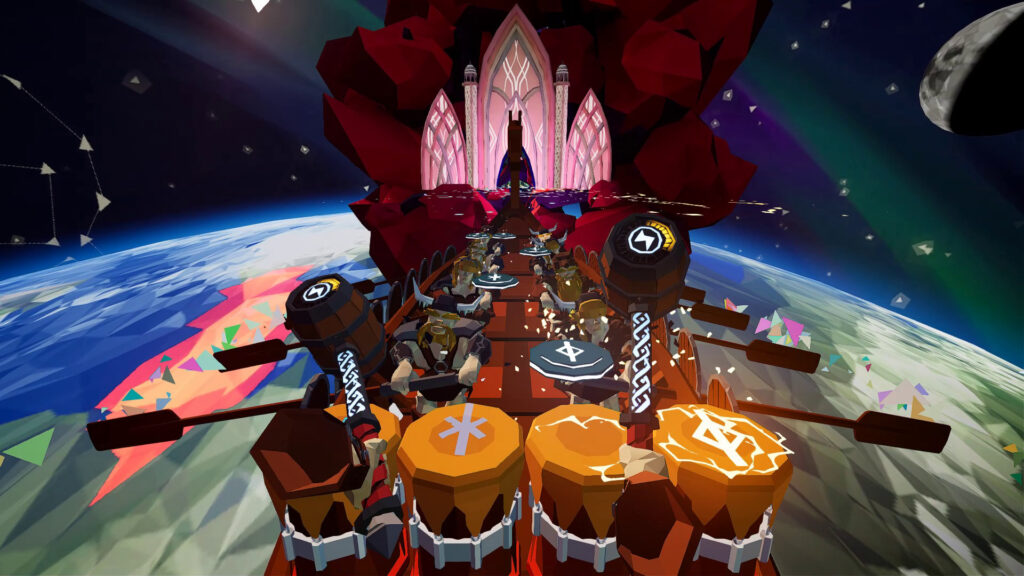 WanadevStudio’s Viking-inspired rhythm action title Ragnarock officially launched over the summer for PC VR headsets, thoroughly enjoyed by virtual reality (VR) fans and VRFocus alike. Around that time the studio also brought Ragnarock to Oculus Quest’s App Lab, going on to confirm this week that a proper Oculus Store release will be taking place next week.

Taking to Twitter, WanadevStudio revealed that the launch date will be taking place next Thursday, 21st October 2021. While the team didn’t say if anything new would be added, at least it means Ragnarock will be much easier to find. Oh, and if you were wondering if you’ve already bought the videogame in App Lab there’s no need to repurchase it once the official release takes place.

Ragnarock boasts an intoxicating mix of metal and Celtic songs to drum away to, all set aboard a Viking longboat where the drumming encourages your shipmates to row faster. The aim with each track is to perfectly time those drums, unlocking speed boosts to achieve a gold medal.

Featuring songs from the likes of Alestorm, Gloryhammer, Saltatio Mortis, Wind Rose and more, Ragnarock offers both solo and multiplayer gameplay modes. In single-player, you can activate a ghost after you’ve played a track once, competing against yourself to try and beat your best score. Multiplayer offers the chance to race against five other players to the finish line.

You don’t just have to play the official song selection either. WanadevStudio introduced custom song support so you can utilise your own track library if you want to. This feature only supports the solo mode.

Reviewing Ragnarock VRFocus said: “Ragnarock impressed before and now that the official PC VR launch has taken place Ragnarock has got even better, finessing what was already an enjoyable experience. The same essence is still there but now there are more tracks, a few extras like new hammers to unlock, and some cool new levels to look at.”

VRFocus will continue its coverage of Ragnarock, reporting back with further updates.