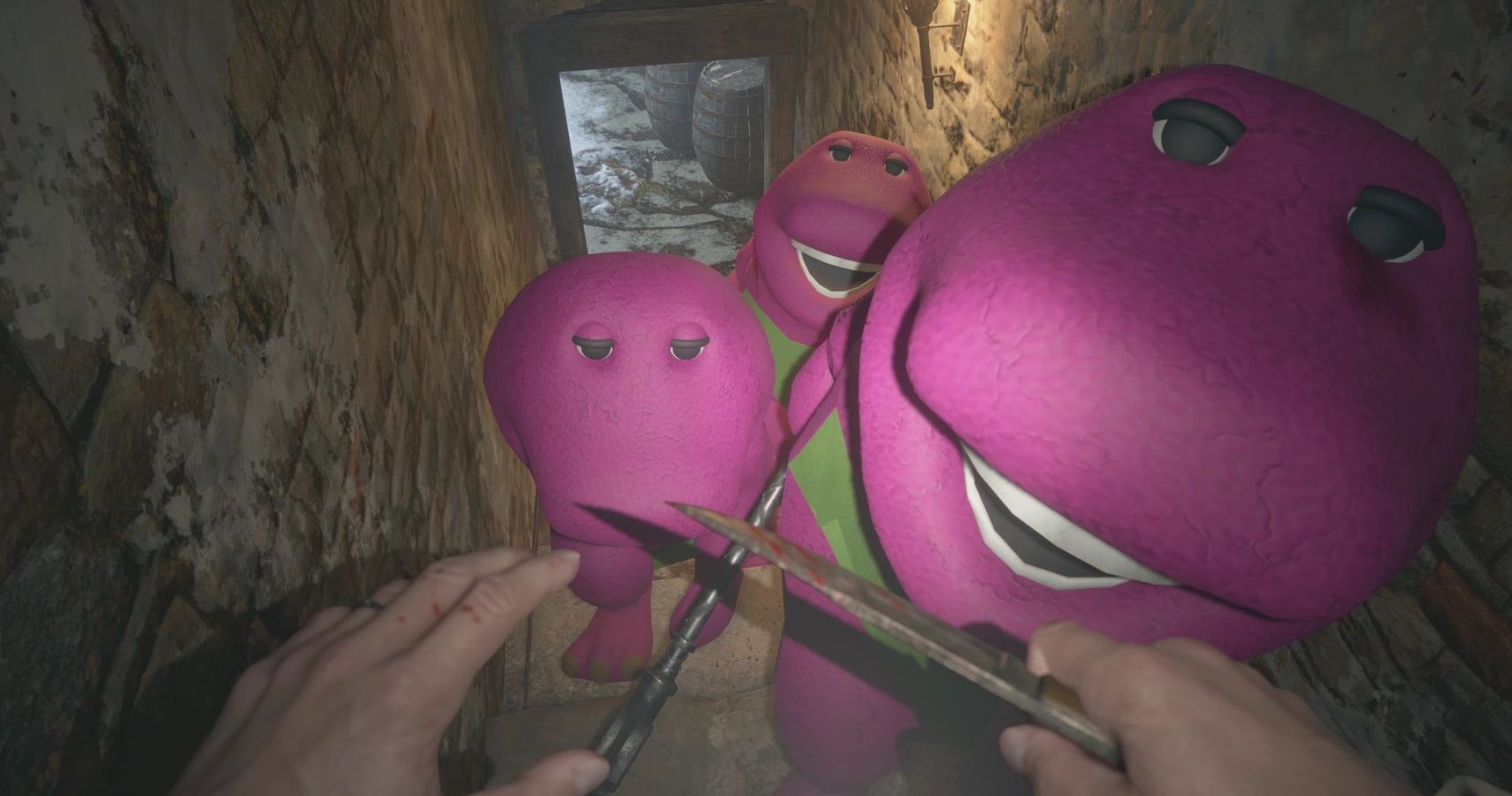 Capcom’s iconic Resident Evil franchise honed people’s fear of zombies in video games, offering relentless scares and gross, undead creatures since 1996. Despite accumulating a heaving slab of titles, none of them compare to the nightmarish Barney mod that someone added to the Resident Evil Village demo. If the purple dinosaur was a big part of your childhood, prepare to have that ruined.

The grand reveal of the eighth Resident Evil title last year is a moment that still gives the community shivers, and the eerie Village was open to the public via the demo last weekend. Capcom’s initial 30-minute taste of Dimitrescu Castle in the 24-hour window was inevitably extended after fans voiced their want for more.

The demo window will now close on May 9, allowing interested zombie hunters the chance to experience what Village has to offer – up to two days after the game’s full release on May 7. Included in the demo will be a 30-minute exploration of Dimitrescu Castle, and a separate 30-minute trial within the village.

The fact that the demo has been extended leaves the door open for more terrifying mods like this one to creep in. Modder ‘Marcos RC’ shared some unsettling images of Barney the Dinosaur on Twitter, wreaking havoc within the tunnels of Resident Evil Village thanks to the model-swapping mod.

Resident Evil frequently unleashes zombie hordes, therefore, multiple Barneys are eager to catch you in this mod – moving like Titans from Attack on Titan whilst giving the demo a Five Nights at Freddy’s vibe. Barney’s grin makes the whole experience much more disturbing, and is there even a certainty you can kill it if it’s made of fluff?

If your childhood memories haven’t been tainted enough, then perhaps this next mod will successfully annihilate Thomas the Tank Engine’s innocence. To be fair, the grey-faced train has already been included in enough horror memes to mark its passing to the dark side, and the Count Theodora mod only confirms that Thomas is the root of all evil. If you didn’t find the almost 10-foot vampire, Lady Dimitrescu, distressing enough, try escaping the image of her morphed Thomas-the-tank-engine face while you’re sleeping.

With the abundance of horrifying mods, we’ve almost forgotten about the scares Village has to offer – but perhaps that’s because it isn’t as scary as past titles. Our four-star review of Resident Evil Village highlights its titular location as a thrilling setting to explore, complete with an entertaining mix of enemies to defeat and puzzles to solve, but its ability to scare was slightly lacking in this chapter.