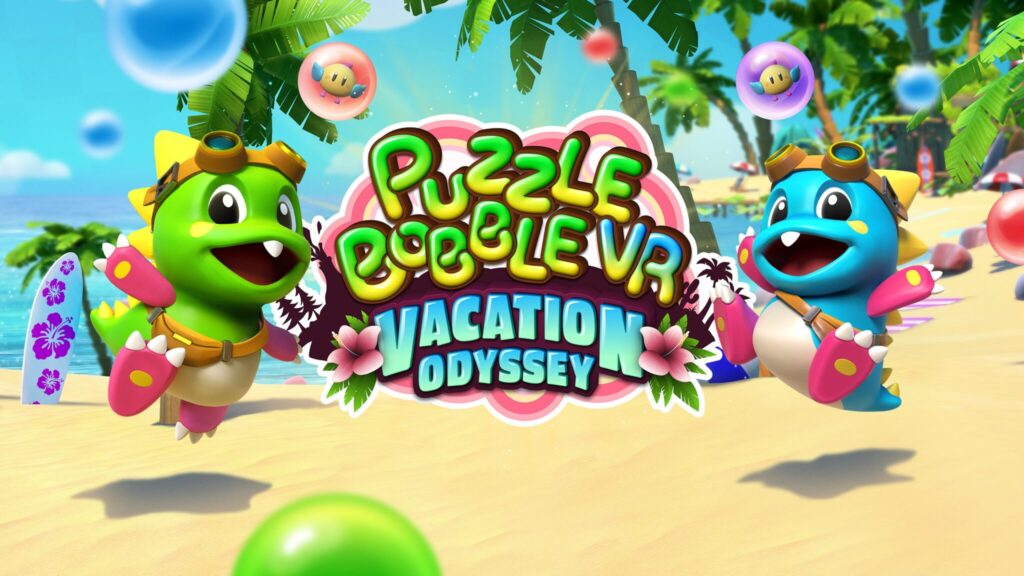 35 years. It’s nuts to think that it has been that long since Puzzle Bobble – or Bust-a-Move depending on where you are in the world – is that old. Even more so considering its sole gameplay mechanic is popping coloured bubbles. Taito has kept the series alive with numerous sequels whilst the format has spawned countless clones. Puzzle Bobble VR: Vacation Odyssey, on the other hand, provides a notable break in the franchise with a more immersive (and physical) control scheme as well as a few extras to differentiate it. But how far can you really push a bubble popping videogame?

In the hands of virtual reality (VR) veterans Survios quite far it seems, taking that classic gameplay and (literally) adding some weight to the whole endeavour. Think you’re a bubble popping master in 2D, well think again when it comes to VR. That precision pointer of the originals is replaced with an intricately designed catapult – seriously, look at all the cogs and gears, it looks awesome – with which to fling those bobbles. If you’ve ever used a bow in VR then you know it can be tricky to aim yet one of the most immersive actions in VR, and that’s true here.

Puzzle Bobble VR: Vacation Odyssey presents you with three gameplay options, step into the Story Mode and try to complete the massive 100 levels; go for the Infinite Mode and face wave after wave of colour baubles or head online for some 1 vs 1 action. All of this ensures there’s no shortage of content as the main campaign alone provides a good few hours of entertainment depending on how successful you are with each level.

As this is 3D gone are the rows of bubbles. Instead, there’s a central core that needs to be destroyed by removing all the outer balls. Survios has added a further twist to the gameplay mechanic by having this floating collection of bubbles spin depending on where you hit it. So if you have a couple of shots planned the second could then become blocked as you’re presented with a new side. It’s an ingenious system to keep you thinking about each and every shot, even on those level where time is of the essence.

However, that can be complicated by how finicky the aiming can be at points. Puzzle Bobble VR: Vacation Odyssey tries to make this as easy as possible by showing exactly where the bubble is going to land. In doing so any connected bubbles will begin to flash to help build chains to pop. As the puzzles get more complicated it can be tricky telling which ones are connected, or worse you get that perfect placement and then because of the smallest of arm movements it’s lost. This is the first Puzzle Bobble where you can actually get fatigued trying to keep that catapult raised, a big step away from the franchise’s more casual roots. It would’ve been good if there was a fine-tune feature – zooming in for example – rather than the extended trial and error.

To make things a little easier are the power-ups. These help to clear larger quantities – great for those later story levels – where you can eat a hot pepper to breathe fire and light a bomb for some bubble destruction. Yet the power-ups are the most restrictive part of Puzzle Bobble VR: Vacation Odyssey because they’re so tedious to get. They cost coins, 100 to unlock then a smaller amount to buy, all earned by completing levels. The coins really do trickle in which kind of puts you off spending them, and should you use a power-up and fail the level then bad luck, it’s gone. And then there’s the pelican. This feathered friend will occasionally appear in levels for you to shoot, dropping a single coin in the process. Which isn’t always worth it, especially when chasing those three-star level clears.

That frustration aside Puzzle Bobble VR: Vacation Odyssey is a lovely world to be inside. It’s suitably vibrant like you’re on holiday plus bubble brothers Bub and Bob make their return. That kid-friendly, welcoming atmosphere extends to the comfort. There’s no locomotion here whatsoever, you’re permanently placed in one spot so you can easily play standing or seated.

Puzzle Bobble VR: Vacation Odyssey retains the series’ charm that makes its gameplay suitable for players of all ages and skill levels. Does it retain that same addictive quality the franchise is known for? Not so much. There’s no doubt Puzzle Bobble VR is fun with a great soundtrack to accompany the gameplay, it just doesn’t have that spark. Sure, once you’ve got through the single-player campaign the duelling mode keeps the experience going but it never quite got its hooks in, which is a shame.